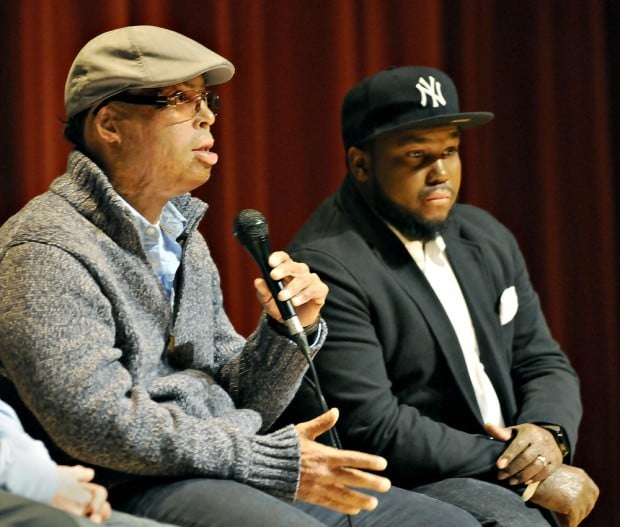 Alvaro Llanos, left, and Shawn Simmons answer questions after a screening of the film 'After the Fire' at the The LaSells Stewart Center Wednesday evening. (Andy Cripe | Corvallis Gazette-Times) 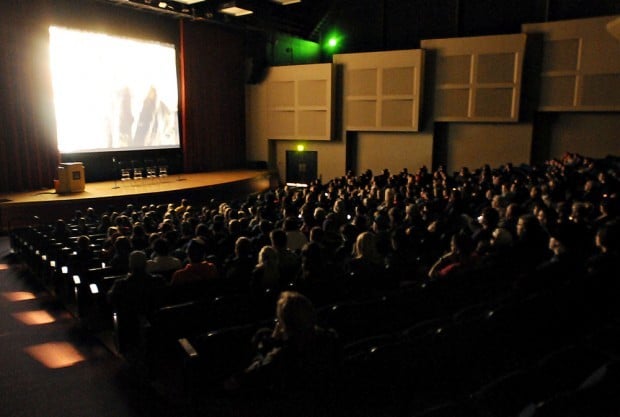 Several hundred people attended a screening of the film 'After the Fire' at the The LaSells Stewart Center Wednesday evening. (Andy Cripe | Corvallis Gazette-Times)

It was a Wednesday about 4:30 a.m. when Alvaro Llanos and Shawn Simons woke up to a fire alarm in their freshman dorm room at Seton Hall University in New Jersey. The two thought it might be a drill until they opened their door to find thick smoke. They began crawling on their hands and knees, searching for an exit. They had too much adrenaline to be scared.

“We were in survival mode,” Llanos added.

The two men, who were 18 at the time, didn’t know they were crawling directly toward the fire. The ceiling collapsed, and a fireball fell on Llanos. He suffered third-degree burns on 56 percent of his body. Simons burned his hands and almost lost four fingers because the floor seared his hands.

That fire on Jan. 19, 2000, killed three students at the dormitory and injured 58 others. Simons and Llanos were two of four who were seriously burned. The fire had started in a communal lounge in the middle of their third-floor hallway when two residents had set a paper banner on fire.

The friends, now both 30, told their story to about 300 Oregon State University students and staffers Wednesday night while also presenting a documentary of their experience “After the Fire” with the film’s director Guido Verweyen. The film chronicles Llanos’ and Simons’ recovery and their friendship that helped them through it.

The presentation at the LaSells Stewart Center was organized by Fire Prevention Officer Jim Patton of the Corvallis Fire Department. It was paid for by 10 nonprofit organizations.

Patton said that he organized the talk and screening of the documentary to teach a life-saving lesson:

“Ultimately, you are responsible for your safety,” Patton said.

The awareness is especially relevant this year, Patton said. So far in 2012, five major fires have erupted near college campuses around the United States. Five deaths have resulted.

Patton said that although Corvallis hasn’t seen a fire fatality since the early 1990s, there’s no reason to be complacent.

“Why do we have to wait for our own local tragedy when there are so many others to learn from?” Patton said. “We continue to dodge the bullet.”

Patton said his biggest message is to awaken people to the reality that they are not invincible.

“To go through life oblivious to how things can go wrong can cost you,” he said.

The message hit home with the audience.

“I thought it was really helpful,” sophomore Chloe Tull, 19, said. “It’s not a some system of hierarchy telling you what to do; it’s the survivors of an event using their words and telling their experiences.”

“It was a real story, it isn’t a lecture and you can learn from them,” said Rosie Mathews, a sophomore sorority member at Alpha Phi.

Mathews said her sorority house was outfitted with sprinkler systems this past summer.

“I feel safe and appreciate it much more,” she said.

Emily Gillespie can be reached at 541-758-9548 or emily.gillespie@gazettetimes.com.

Major fires near college campuses so far in 2012

• Jan. 14, Marist College, Poughkeepsie, N.Y. Three of six occupants were killed when a three-story home several blocks from campus burned. The building was a total loss. The cause of the fire is being investigated.

• Jan. 22, Boston University Allston, Mass. Seven students were injured, one seriously, after a three-story house caught fire. The cause of the fire is being investigated.

• Jan. 29, University of Wisconsin, Madison, Wis. A fire, which started in the recreation room in the basement of a dormitory, displaced 300 students for a semester.

• Jan. 29, Alma College, Alma, Mich. A fraternity house burned due to a fire in a trash can in the basement. All occupants escaped but the building is a total loss.

Police allege that when an employee tried to take the suspect's photo, the man pulled a knife.

Oregon recorded its highest single-day, COVID-19 related death count this week — 82, reported by the Oregon Health Authority on Tuesday — and …

Alvaro Llanos, left, and Shawn Simmons answer questions after a screening of the film 'After the Fire' at the The LaSells Stewart Center Wednesday evening. (Andy Cripe | Corvallis Gazette-Times)

Several hundred people attended a screening of the film 'After the Fire' at the The LaSells Stewart Center Wednesday evening. (Andy Cripe | Corvallis Gazette-Times)