Albany Police Sgt. Robert Hayes examines the Chrysler PT Cruiser that had allegedly been traveling at a high rate of speed before the crash. The driver of the PT Cruiser was hospitalized with non-life-threatening injuries. 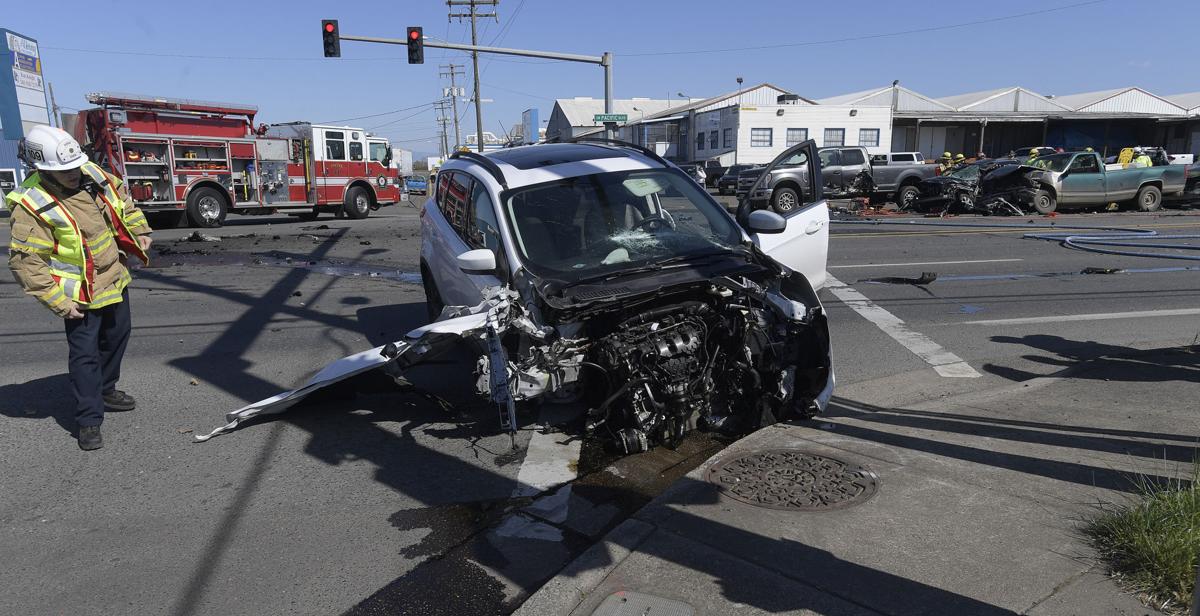 Albany Fire Department training chief Scott Cowan examines one of the cars involved in the collision at 29th Avenue and Pacific Boulevard.

A 26-year-old man was hospitalized Tuesday afternoon and may face criminal charges after he allegedly sped recklessly through Albany and caused a multi-vehicle crash.

The crash occurred shortly after 3:20 p.m. at the intersection of Pacific Boulevard and 29th Avenue Southwest.

According to Capt. Jerry Drum of the Albany Police Department, the incident began when a black 2002 Chrysler PT Cruiser that had been reported for reckless driving in Salem was spotted by a state trooper who was stopped at a red light on Pacific Boulevard just off Interstate 5 in Albany.

The vehicle reportedly ran the light and swerved around the trooper, who started to give chase in his patrol car but quickly halted the pursuit because of safety concerns.

From there, Drum said, the PT Cruiser continued south on Pacific Boulevard at a high rate of speed until it smashed into several other vehicles at the 29th Street intersection and came to rest facing north, wedged between two cars in the northbound lanes.

The driver of the PT Cruiser, identified as Samuel Smith of Dallas, Oregon, was taken to Good Samaritan Regional Medical Center in Corvallis with injuries that were not believed to be life-threatening.

Charges are pending in the case, Drum said.

Several other motorists suffered minor injuries in the collision and were examined by Albany Fire Department medics at the scene but were not taken to the hospital, he added.

Stephani Simon, 41, of Albany told Mid-Valley Media she was on her way to pick up her sons at Memorial Middle School when the crash occurred. Simon said she was stopped for a traffic signal on 29th and Pacific when she heard a screech and a bang and found herself being thrown back in her car.

Simon said she saw several people get out of their vehicles to assist the driver of the PT Cruiser and that at least one other person at the scene appeared to be injured.

Pacific was closed between 24th and 34th streets for just over an hour while emergency responders worked at the scene.

The crash remains under investigation, and Drum said there could be additional victims. One witness told police that Smith hit a number of parked cars before the crash at Pacific and 29th.

Anyone with information about the incident is asked to call Officer Blake Miller at 541-917-7680.

Officials: All Migrants Are Gone From Texas Border Camp

Officials: All Migrants Are Gone From Texas Border Camp

A Junction City man was sentenced to 204 years in prison on 22 charges, including 21 felony sex crimes, in Linn County Circuit Court Tuesday.

A Turner man found guilty in a 2019 Sweet Home murder was sentenced to life in prison Tuesday.

With unusually warm, dry and windy weather moving into the area, outdoor burning of yard debris and other material has been temporarily banned…

Albany Police Sgt. Robert Hayes examines the Chrysler PT Cruiser that had allegedly been traveling at a high rate of speed before the crash. The driver of the PT Cruiser was hospitalized with non-life-threatening injuries.

Albany Fire Department training chief Scott Cowan examines one of the cars involved in the collision at 29th Avenue and Pacific Boulevard.