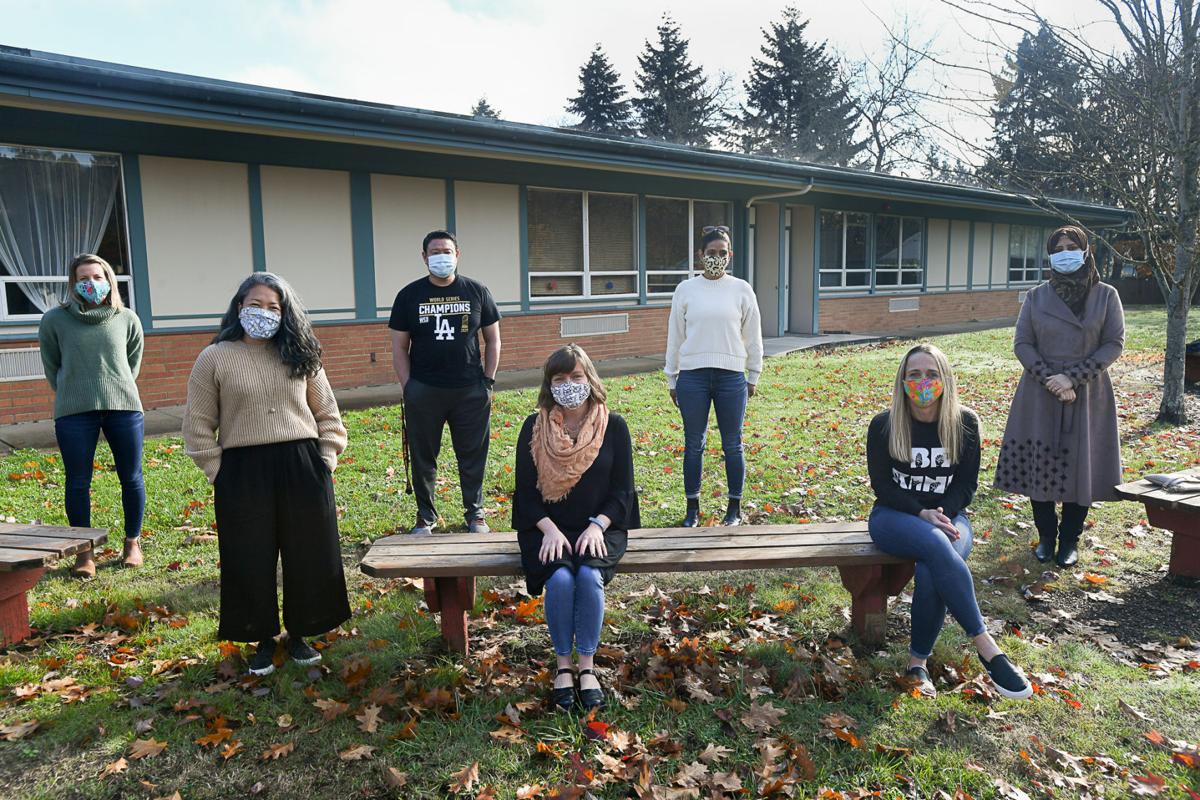 Jaguar Elementary School's Equity Team members pose for a photo outside the school recently. The team helps provide input to the task force charged with renaming some schools in Corvallis. 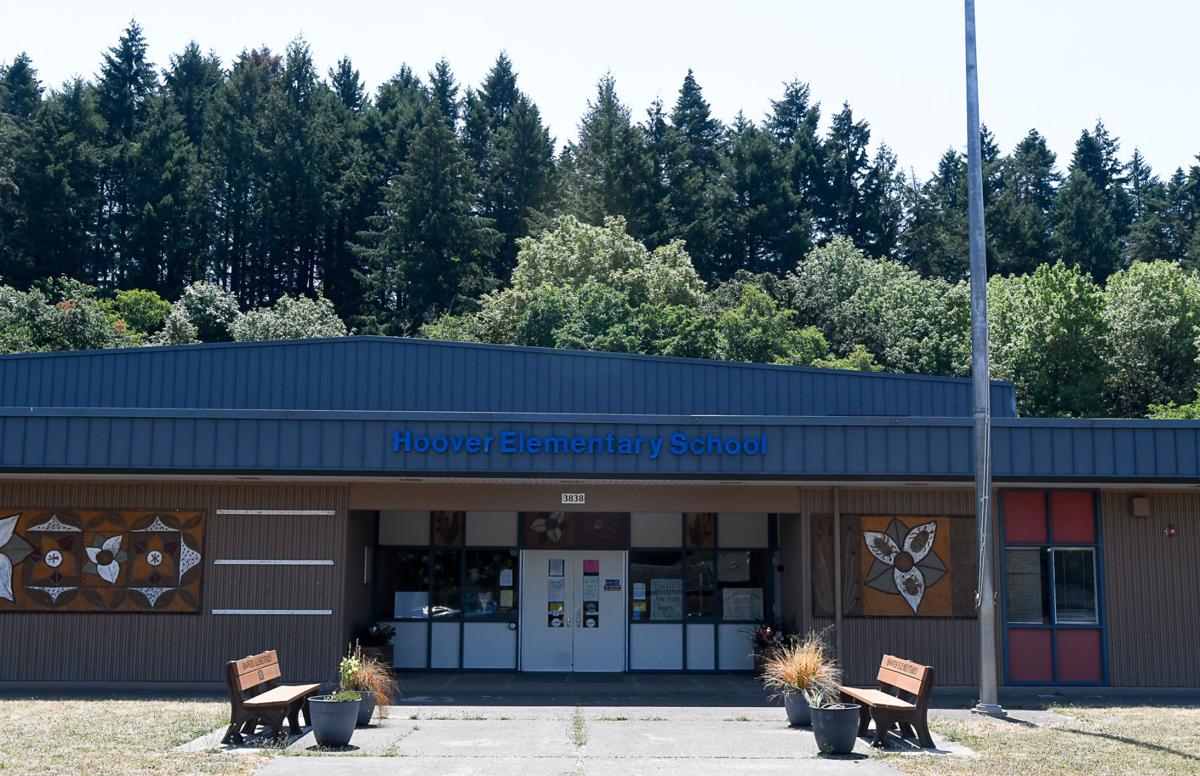 Husky Elementary School had been named for President Herbert Hoover and is one of three Corvallis schools being considered for renaming because of racist associations with their namesakes. 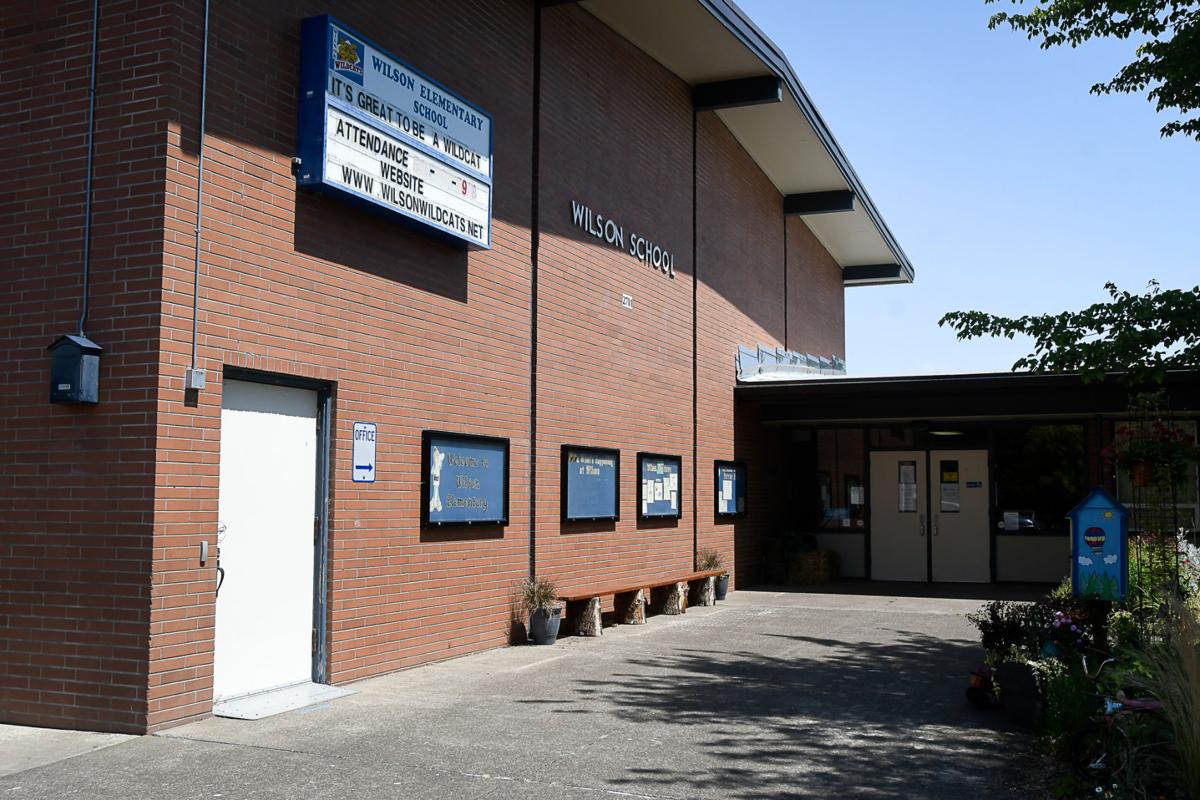 Woodrow Wilson's racist views have landed what is now called Wildcat Elementary on a list of Corvallis schools being considered for renaming.

The group, which has so far participated in five out of seven scheduled meetings, was born from a School Board resolution passed in August. It removed from district elementary schools the names of former presidents Thomas Jefferson, Herbert Hoover and Woodrow Wilson, all of whom had histories of racist practices. The schools have been renamed after their mascots — Jaguar, Husky and Wildcat, respectively — in the interim.

In order to change the school names, CSD Superintendent Ryan Noss said, “We wanted to make sure that we had a diverse representation of voice relating to race and language."

Controversy surrounded the resolution’s passing in September, with some community members speaking out against the name changes and accusing the district of promoting historical revisionism.

According to the resolution, extra consideration will be given to recommendations involving “figures who valued and worked for social justice in their lives,” inspirational women (as no Corvallis school is currently named after a woman) or names honoring local Indigenous groups. A charter by Noss allowed for a task force to be assembled in order to research new names.

The task force, chosen from a pool of 19 applicants, is almost equal parts male to female and represents at least five ethnic groups. Noss said seeing students working alongside adults has especially been “really humbling to see.”

“I think that one of the things, even in the charter and even partially in the resolution, was making sure the diverse community was included,” Noss said. “I do feel like the group comes to us with a number of perspectives, lived experience and also a real commitment to address and participate in such a way that they are identifying the names of schools that are representative and also create excitement and are motivating to our kids.”

Wenaha Group consultant and task force facilitator Melanie Quaempts said the groups’ three students are fifth-graders, one each from Jaguar, Husky and Wildcat. The task force’s father-son duo Jason and Zeke Thomas even sign into meetings on different computers and have discussions in separate breakout sessions during Zoom calls.

“They are incredibly articulate, they're social-justice-passionate,” Quaempts said of the youngsters. “They are independently voicing their perspectives. They’re very passionate about making sure that their fellow students have an opportunity to weigh in.”

No task force member responded to a request for comment on this story.

Some members of the public have criticized the district for allowing the task force’s meetings to be conducted behind closed doors. Initially, the School Board planned to livestream task force meetings, which take place over Zoom video chat, to maximize public participation. This was announced as a possibility before candidates applied to be on the task force.

During talks with the newly-selected members, however, some had hesitations about unabashedly expressing their beliefs on such a public pedestal.

“In our very first announcement, before we had formed the committee, we had an assumption that we were going to be handling these meetings the way that we have been handling board meetings,” said district spokeswoman Brenda Downum. The idea of live-streaming the meetings, however, “caused people some pause.”

Minutes, which briefly summarize the main ideas of each meeting, are posted on the CSD website instead. Quaempts said this decision is evidence of the district “trying to disrupt some of their own processes that maybe lead folks, especially folks that represent marginalized communities to feel uncomfortable, to feel as though this isn’t a safe space to raise their voice or have a voice.”

Quaempts leads the discussion in each meeting, but said she does not weigh in on suggestions — nor do Noss, Downum, School Board liaison Luhui Whitebear or the Jaguar, Husky and Wildcat principals who also attend the meetings.

The principals have also established Equity Teams at each of the three schools that will provide input to the task force.

All meetings involve some degree of considering public comments, which can be sent to the task force by visiting the website as well. In an Oct. 29 news release, Downum said the public comment period would close after Nov. 1, but the online form is still available and functional.

“There is open comment, they can weigh in anytime,” Quaempts said. “There really is an eclectic array of comments. All of those comments, to some degree, are really helpful to the task force.”

Once the task force completes its deliberations, its recommendations will be submitted to Noss, who will then bring them to the School Board for a vote. Multiple names can be suggested for any one building.

Noss has the power to send his own name suggestions to the Board as well, or veto ideas agreed upon by the task force. He declined to speculate on whether he would exercise this authority.

Seventeen district-run buildings could potentially have new names per the group’s suggestions, including every school, the District Office and Western View Center.

Following the group’s Nov. 10 meeting, all of the school name ideas submitted by the public up to that day were listed on the website. There are suggestions specific to the three schools that have had their names removed, plus general ideas for any building.

“I don’t think that they’ve made a decision on that yet,” Noss said about whether the task force has decided it wants to change facility names other than the already renamed elementary schools. He said there also isn’t a shortlist of favorite names among the group yet.

“We’re not there yet but we’re getting closer,” Quaempts added.

She and Downum said some of the group’s research on new names have included consulting with local Indigenous tribes and the Benton County Historical Society.

“What’s most helpful is for folks to know … that this task force is taking this work so incredibly and deeply seriously,” Quaempts said.

Beginning Monday, Corvallis community members will be able to make their case for why they should help review, and potentially change, the names of the city’s schools.

Due to the former presidents’ racist histories, the Board is entertaining a resolution calling for new names. If the resolution is adopted, the Board would also review other district school names and consider further changes by gathering input from the community.

Corvallis School Board to vote on changing 3 school names

The question of racist school names will be examined by the Corvallis School Board when it convenes Thursday evening for a special meeting.

About 9% more of the high school students in Greater Albany Public Schools are failing a class compared to this time last year.

Corvallis schools could be renamed after women of color

Husky, Jaguar and Wildcat elementary schools in the Corvallis School District will likely be renamed after influential women of color, a decis…

Jaguar Elementary School's Equity Team members pose for a photo outside the school recently. The team helps provide input to the task force charged with renaming some schools in Corvallis.

Husky Elementary School had been named for President Herbert Hoover and is one of three Corvallis schools being considered for renaming because of racist associations with their namesakes.

Woodrow Wilson's racist views have landed what is now called Wildcat Elementary on a list of Corvallis schools being considered for renaming.