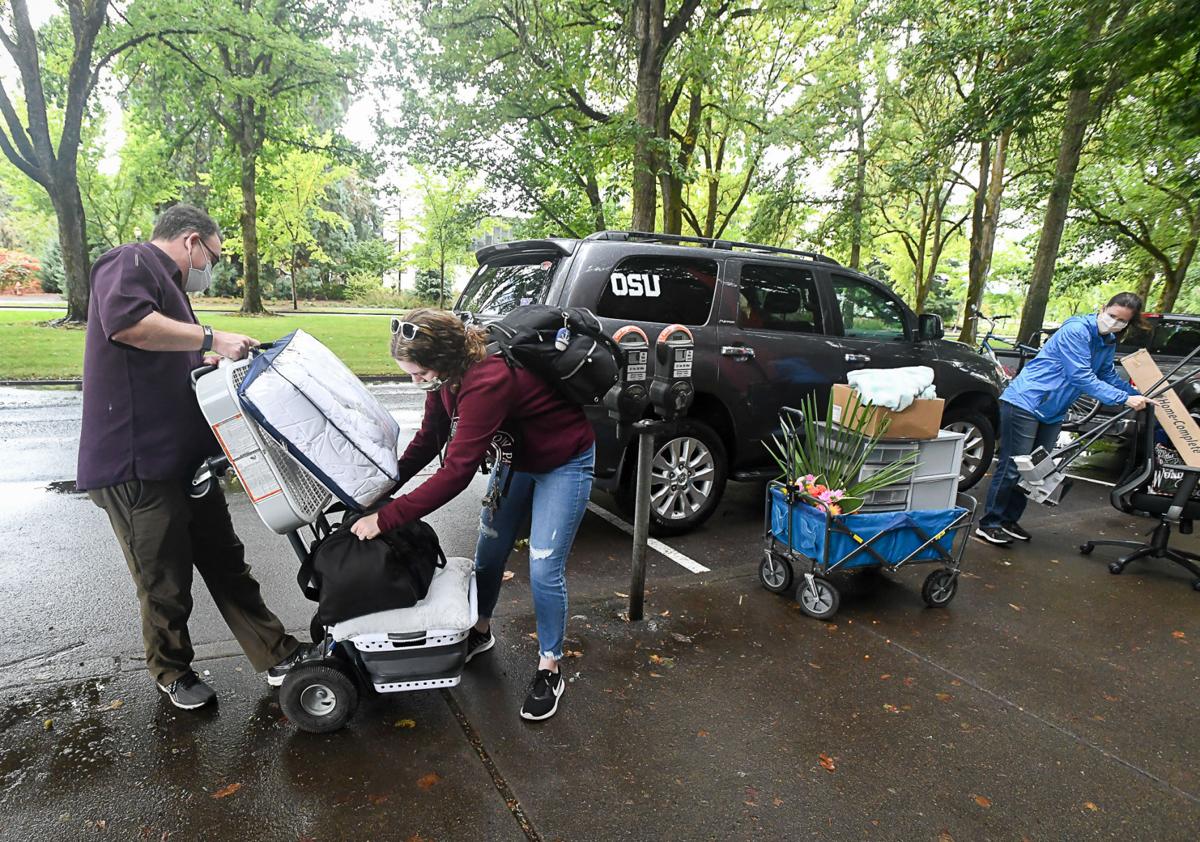 Oregon State University freshman Chloe Reynolds, 18, center, gets a hand from her parents Steve Reynolds, left, and Linda Reynolds as she moves into West Hall on Friday afternoon. 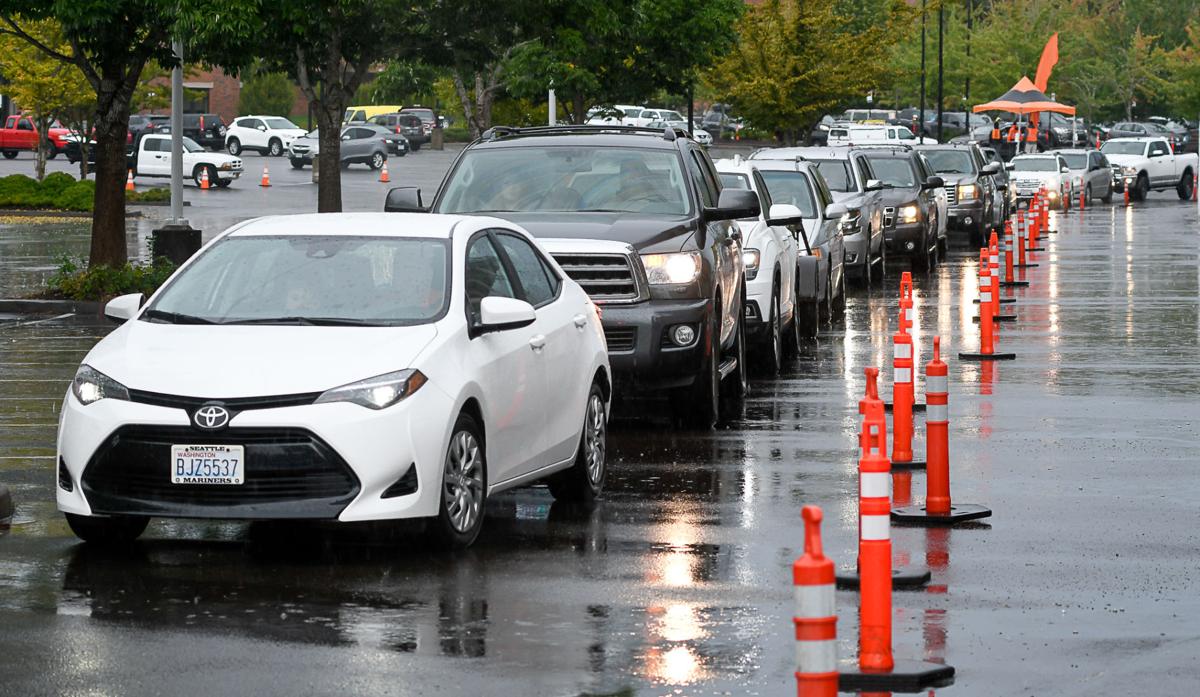 Incoming Oregon State University students and their parents line up in their cars at the start of the move-in process on Friday. 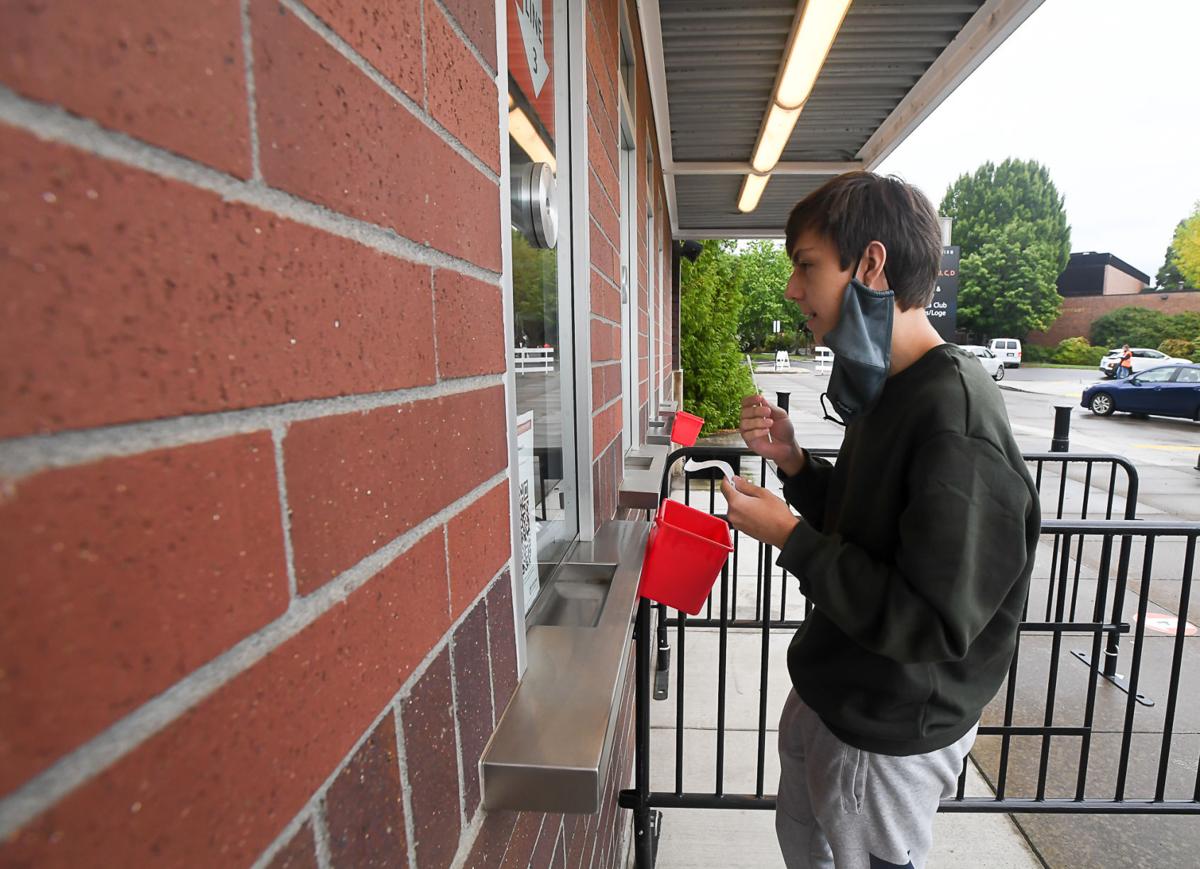 Oregon State University freshman Alexander Daniel, 18, listens to instructions for a self-administered COVID-19 test as part of the move-in process on Friday. 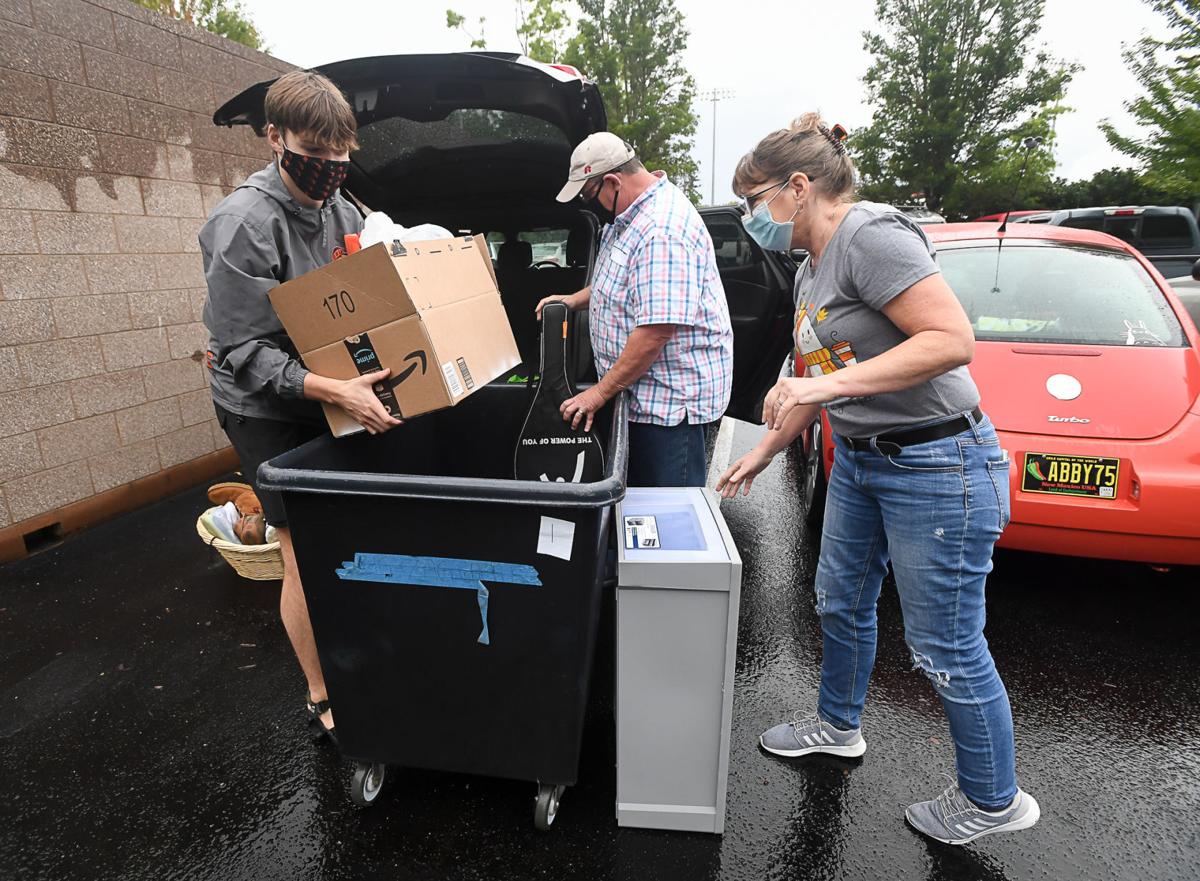 Oregon State University freshman Nicholas DuVernay, 18, and his parents Tim and Lynne Griffith load his belongings into a cart on Friday as part of the move in process at OSU.

Vehicles carrying new students were corralled in the Reser Stadium parking lot, where students then picked up care packages, self-administered rapid COVID-19 tests and were escorted to their residence halls in small groups. Due to the hybrid approach OSU is taking for classes, the university only expects around 2,500 students to live on campus this year. Many of them are moving in between Friday and Tuesday.

“Aside from the testing element at play, it’s just a more spaced-out process,” said Brian Stroup, University Housing and Dining Services’ director of operations and facilities. “We’re ready to welcome them and get them ready for their experience. We’re happy to have them here.”

“It’s quite a sophisticated set-up,” Haubenreiser said. “We have a rapid antigen test where we can get the result back rather quickly.”

Using Quidel Corporation’s Sofia SARS Antigen test kits and enlisting the help of mobile lab researchers plus the OSU TRACE COVID-19 team of volunteers, students were able to get their test results back in as little as an hour.

Students testing positive for the coronavirus were escorted to a residence hall that has been designated for quarantining students. The university did not disclose if any positive cases had been discovered Friday afternoon, or which residence hall is for isolation.

Stroup said the isolation dorm is a suite-style facility and that staff will offer students fresh linens and other needs. The university also will deliver food to students staying there until their two weeks of quarantine are up.

“We have it set up so that, when a student gets there, they have everything they need,” he said.

As for healthy students, residential life will have a few more rules than previous school years. These include a face mask requirement when students aren’t in their own rooms, a prohibition on visitors in rooms from other dorms and a 10-person limit on gatherings between people from the same building.

“There’s still going to be community events and interactions,” Stroup added, “but within those guidelines.”

“Game nights, movie nights … will all be online,” Arredondo said. “We’ve gotten pretty creative with our programming, so I hope it all goes well.”

Outside of Finley, freshman Carson Bittle finished unpacking his belongings with his sister and mother. Although he said he’s nervous that he won’t get as much joy out of doing the majority of his socializing online, “it’s nice to finally be here for real.”

“Nerves have been flying,” Bittle said. But, “It’s been a pretty good experience moving in and seeing campus.”

His mother Liz Rambo, an OSU almuna, said she was impressed by the move-in process and that she wishes it had been handled that way when she was a student in the 1980s.

“It was smooth as pie,” Rambo said. “It actually made me think, ‘Wouldn’t it be great if they had something like this every year?’”

Stroup said the university scheduled its move-ins by building and by room, so tests could be processed more efficiently. Also, next door neighbors have different arrival windows to encourage physical distancing. Wilson, Buxton and West residence halls also had move-ins Friday.

Tigard resident Chloe Reynolds, whose mom and dad helped haul her belongings into West Hall, said she’s happy to finally be out of the house.

“I’m so excited to move out and go to college and change it up a little,” said the freshman, who plans to major in biohealth sciences. All of the classes she signed up for, however, will be online.

“I would rather have in-person (classes),” she said, “but I’m just happy to be here.”

Stella Sablan, a freshman from Portland who plans to study biology, awaited the result of her coronavirus test in the parking lot with her mother and a friend.

“I’m looking forward to just meeting everyone,” Sablan said. “Some of my classes are online and some are in person, so I’m curious to see how the in-person classes will go.”

Sablan’s mother, Marie, said she appreciated that the university tested each student.

“I feel safer that they have to get tested before moving in,” she said. “I’m just hoping that students will keep their masks on and be safe while parents are away.”

Larry Griggs, who spent decades working in educational opportunity programs at Oregon State University, has died at the age of 76, the univers…

The last barrier standing between Oregon State and an approved return to football was lifted Thursday — at least in the state of Oregon.

Only seven new COVID-19 cases for Benton County on Sunday

Benton County’s novel coronavirus figures returned to single digits on Sunday, a day after seeing a record number in COVID-19 cases due to stu…

Sweet Home continues to be one of the mid-Willamette Valley’s healthiest communities, at least in terms of COVID-19 cases.

As COVID-19 cases in Benton County rise with Oregon State University’s fall term getting underway, identifying cases early and getting those w…

With the first three days of classes in the books, Oregon State University students have had their first glimpse of what the 2020 fall term wi…

The door-to-door TRACE Community project will land in Eugene Nov. 7 and 8, the universities announced Thursday afternoon.

Oregon State University freshman Chloe Reynolds, 18, center, gets a hand from her parents Steve Reynolds, left, and Linda Reynolds as she moves into West Hall on Friday afternoon.

Incoming Oregon State University students and their parents line up in their cars at the start of the move-in process on Friday.

Oregon State University freshman Alexander Daniel, 18, listens to instructions for a self-administered COVID-19 test as part of the move-in process on Friday.

Oregon State University freshman Nicholas DuVernay, 18, and his parents Tim and Lynne Griffith load his belongings into a cart on Friday as part of the move in process at OSU.