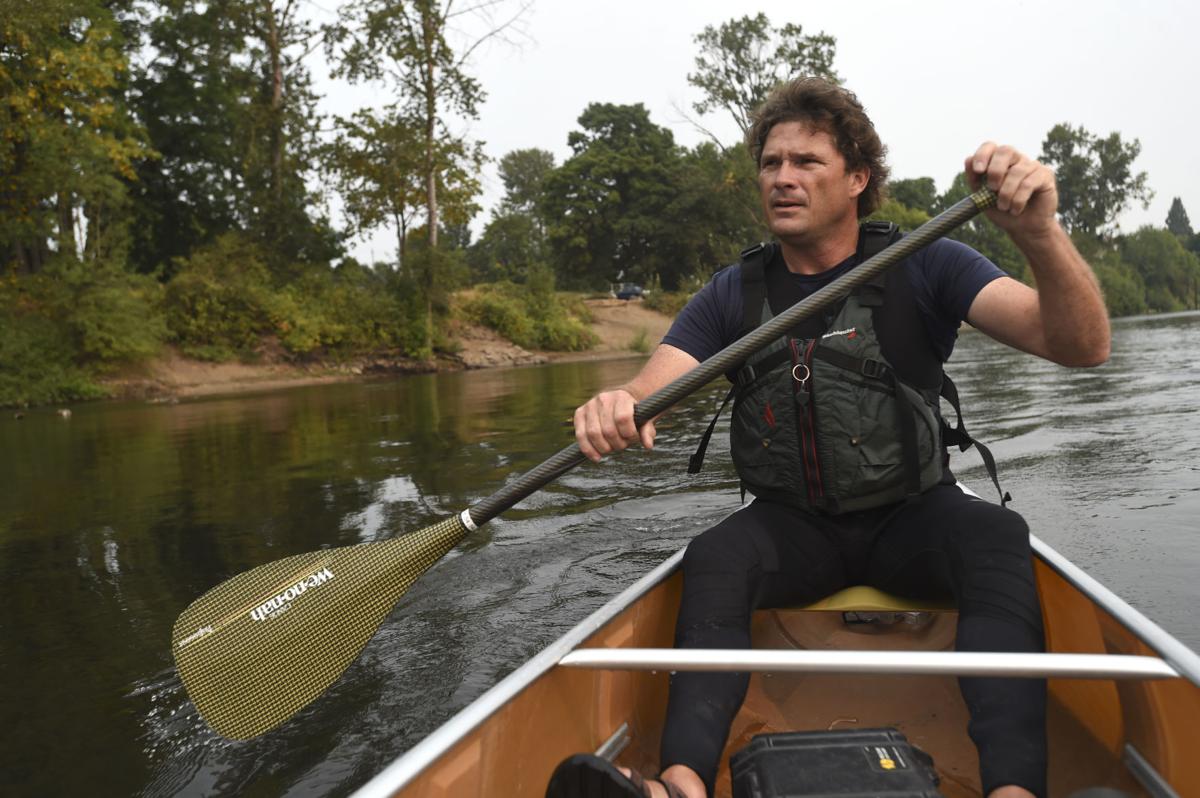 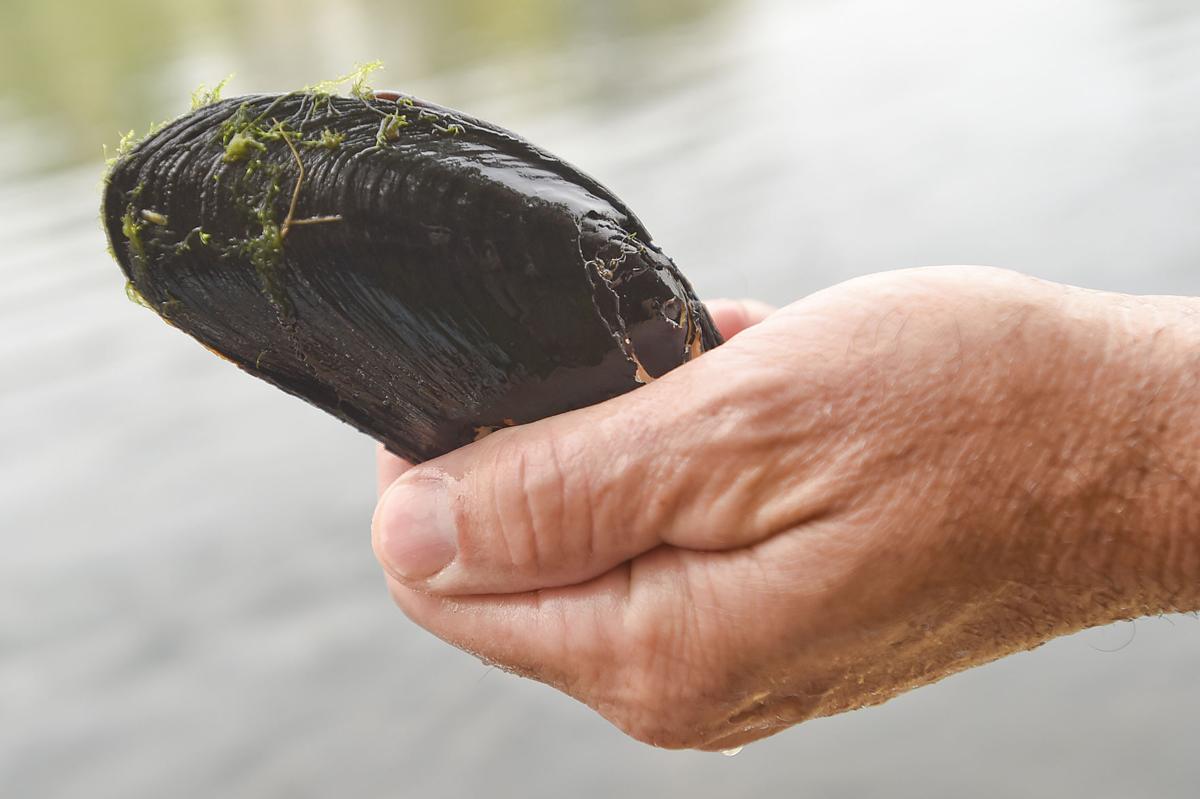 Williams holds up a western pearlshell mussel in the orientation that it would be found underwater. 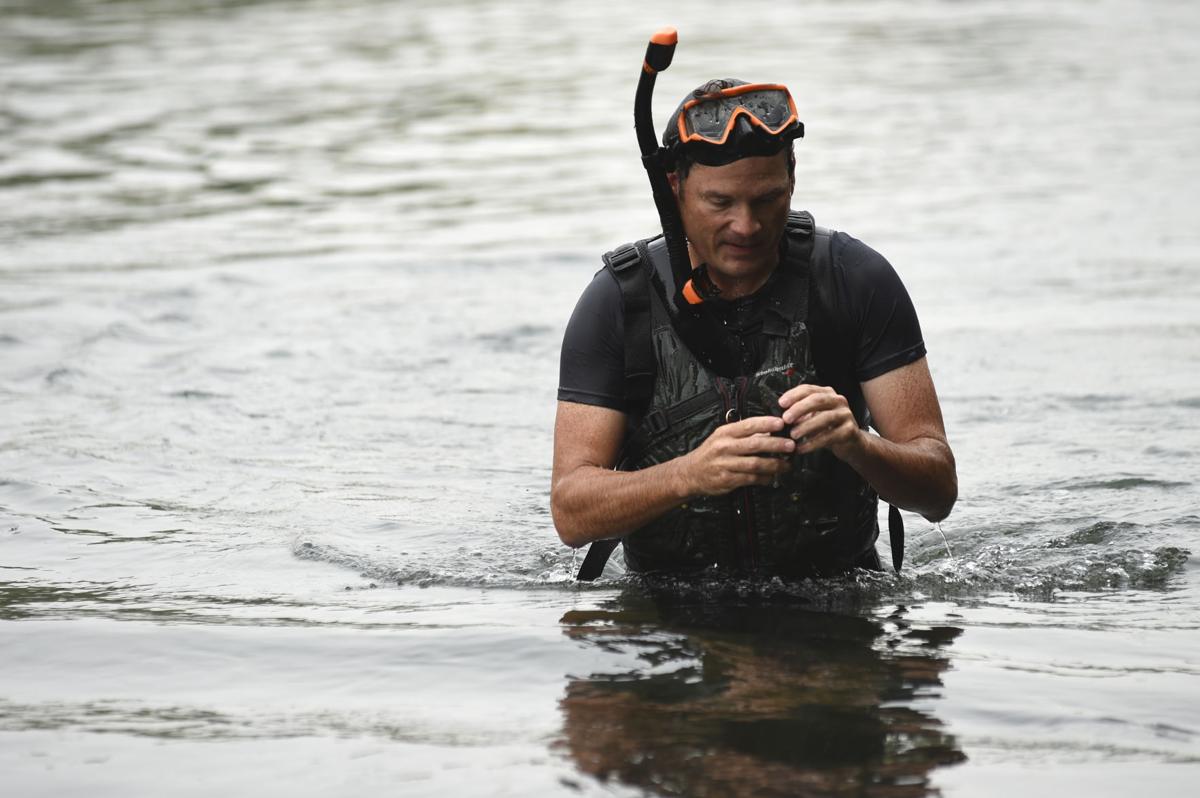 Travis Williams, of Willamette Riverkeeper, brings up a western pearlshell mussel while snorkeling on Sept. 5.

Travis Williams wore a black wetsuit and snorkel last week  as he submerged his face into the moving water of the Willamette River at Michael’s Landing.

It was Tuesday morning, and Williams was surveying the river floor for mussels. He dove to the rocky ground and emerged victorious with a black-shelled creature about 5 inches in length. The mussel, covered in bright green algae, expelled a small squirt of water from between its shells.

The environmental scientist is the executive director of Willamette Riverkeeper, a Portland-based nonprofit group with a mission to protect and restore the river. The organization is studying the western pearlshell, the predominant species of freshwater mussel in the Willamette River, to determine how the invertebrate animals are faring.

The International Union for Conservation of Nature has placed the western pearlshell on its red list of threatened species.

Williams, along with his colleagues and volunteers, were using snorkels and Aquascopes — an underwater viewing device — to inspect likely mussel habitats from Eugene to Salem. So far, they’ve found few juveniles, or young adult mussels.

By collecting this data, which will add to a broader understanding of the species, Williams hopes conservationists will be able to take better action on behalf of freshwater mussels, Williams said.

“There’s nowhere near enough data to really treat this species in a way that shows that we’re really taking seriously their long-term welfare,” he said.

Willamette Riverkeeper started the mussel survey in July with a study of a dense group of mussels on the side channel of Norwood Island, which sits at the confluence of the Long Tom and Willamette rivers about midway between Harrisburg and Peoria.

The nonprofit group contracted with CASM Environmental LLC, which designed the study and will produce a report on the project in the upcoming weeks, Williams said. With the help of volunteers, the environmentalists counted thousands of mussels in a one-mile stretch and excavated some to gain information about the age of the mussels in the channel.

Willamette Riverkeeper is conducting a survey of mussel populations in a much longer stretch of the river, starting at the lower end of the Middle Fork Willamette River, then in the mainstem and down to Salem. This will help the group better understand the overall distribution of the mussels in an area of the river encompassing about 107 miles.

Williams suspects the mussels are less present in the river than they once were, but the data being collected will help him make a more informed assessment, he said. The decimation of the species could be due to pollution, habitat loss and changes in the flow of the river, Williams said.

“For us, it’s really about the health of the Willamette River system and having a river that not only enables mussels to reproduce and survive but enables people to be able to go out and use the river without worrying about their health,” he said.

The mussels could also be impacted by changing populations of certain types of fish, Williams said. In order to reproduce, the female mussels release embryos into the water. The embryos attach to fish gills and act as parasites until releasing from the gills and settling on the river bottom. So, an absence of host fish could affect the mussels’ survival, he said.

“For people in Corvallis, the presence of these animals highlights the need to ensure that we all do our best to keep chemicals out of the water, and to increase support for watershed health,” Williams said. "The mussels don’t have a choice, but we do."

If you want to volunteer to join Willamette Riverkeeper in the field as the group surveys mussel populations, send an email to Travis Williams at travis@willametteriverkeeper.org.

A 77-year-old Linn County woman was added to Oregon’s novel coronavirus death toll on Wednesday, according to the Oregon Health Authority.

Williams holds up a western pearlshell mussel in the orientation that it would be found underwater.

Travis Williams, of Willamette Riverkeeper, brings up a western pearlshell mussel while snorkeling on Sept. 5.