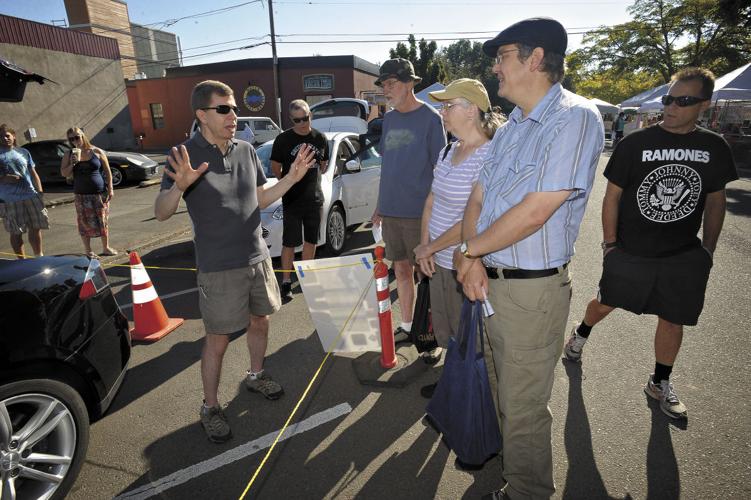 Robert Eager, left, tells the story of driving his Tesla electric car from New Mexico to Oregon. Several electric cars were on display at the Corvallis Farmers Market on Saturday. (Andy Cripe/Corvallis Gazette-Times) 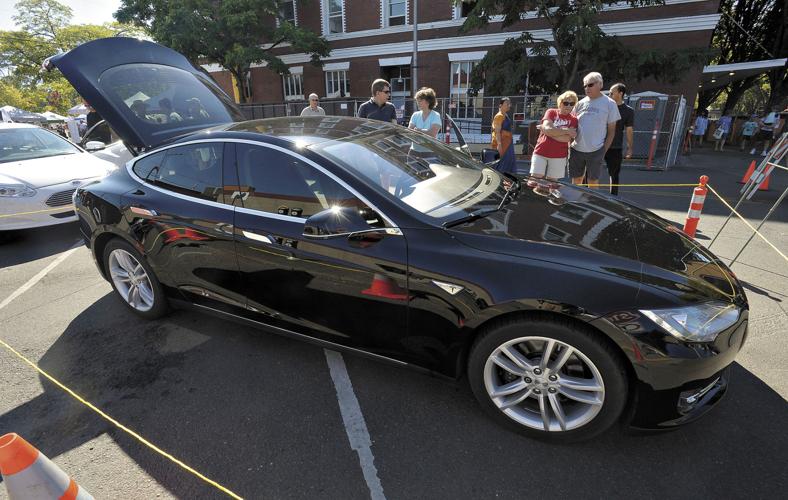 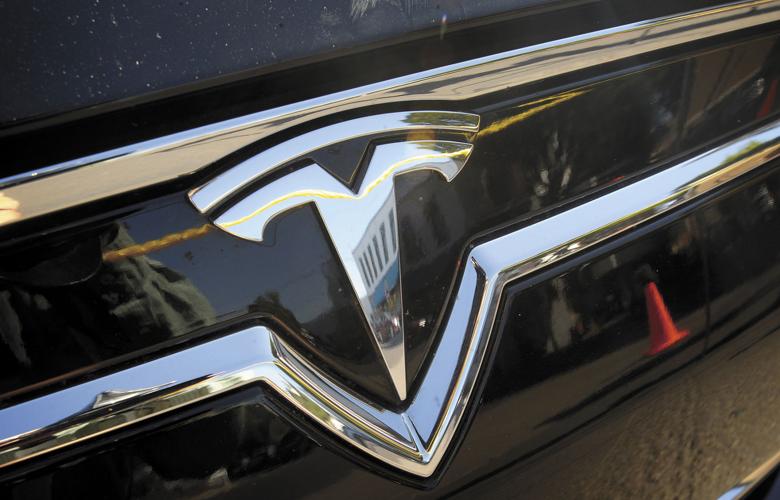 Robert Eager drove nearly 1,500 miles from Albuquerque, N.M. to Corvallis in his Tesla S and he never stopped at a gas station.

Robert and his father, Walt Eager of Corvallis, showed off their electric vehicles at the Corvallis Farmers Market on Saturday morning to provide voluntary demonstrations and give people rides in their own cars to show off the benefits of electric vehicles in honor of National Drive Electric Week.

The pair were not paid or endorsed by any electric vehicle companies or organizations. For the Eagers, the demonstrations are about a love of engineering and looking out for future generations.

“It’s about my grandchildren and everyone else’s grandchildren,” said Walt, an 83-year-old retired mechanical engineer. “We have to do this. We’re dumping fossil fuel exhaust into the atmosphere here in Corvallis. This is simply our concern about our society. We have to shift to electric because we can’t keep doing things the way we have.”

Walt believes so much in the idea of sustainability that he and his wife, Marielu, built a sustainable home in Corvallis. The couple influenced the next generation as Robert has a degree in mechanical engineering from Oregon State University and an electrical engineering degree from the University of Mexico.

“We’re an engineering family,” Robert said. “I don’t know if it’s genetic but we like tinkering with things and building things. What we’re doing is a natural outgrowth of that. This is the next logical step in transportation.”

“I was never a car enthusiast before I got this car,” he said, referring to the Tesla S. “My enthusiasm about electric cars and that belief of it being the right way to do things made me want to share my experiences with others so they can get that personal insight into what it is. Personal experience is what really drives people to embrace a new technology. With any new technology, there is resistance because of the unknown. What we’re doing is trying to break down those unknown barriers.”

Nathan Bruttell is a reporter for the Gazette-Times. He can be reached at 541-758-9548 or nathan.bruttell@lee.net

Every day, Stone Soup Corvallis serves meals to those who show up to the organization's soup kitchens in Corvallis, no questions asked.

Thursday is Thanksgiving Day. Here is a list of holiday schedules and closures for the weekend:

‘Tis the season for a Christmas tree

Christmas tree permits are available for purchase from the Siuslaw National Forest now through Dec. 31.

Wednesday, Nov. 23, is the last day to get something cleaned. After Thanksgiving, it will be pick-up only.

Digital comics and puzzles are back!

Digital comics, puzzles and columns provided to this website's subscribers are back online after an outage this week.

To no one’s surprise, Attorney General Merrick Garland has appointed a special prosecutor, Jack Smith, to investigate former President Donald Trump. You might think that you’ve seen this movie before. But there’s little reason to think this will be a repeat of the Robert Mueller investigation that declined to bring charges against Trump. Charges are more likely this time around — though that doesn’t guarantee they will stick.

Albany First United Methodist Church, 1115 28th Ave. SW, will hold a series of organ recitals at 3 p.m. on each of the four Sundays of Advent.

China's protests over lockdowns spread to campuses and communities abroad

China's protests over lockdowns spread to campuses and communities abroad

Robert Eager, left, tells the story of driving his Tesla electric car from New Mexico to Oregon. Several electric cars were on display at the Corvallis Farmers Market on Saturday. (Andy Cripe/Corvallis Gazette-Times)