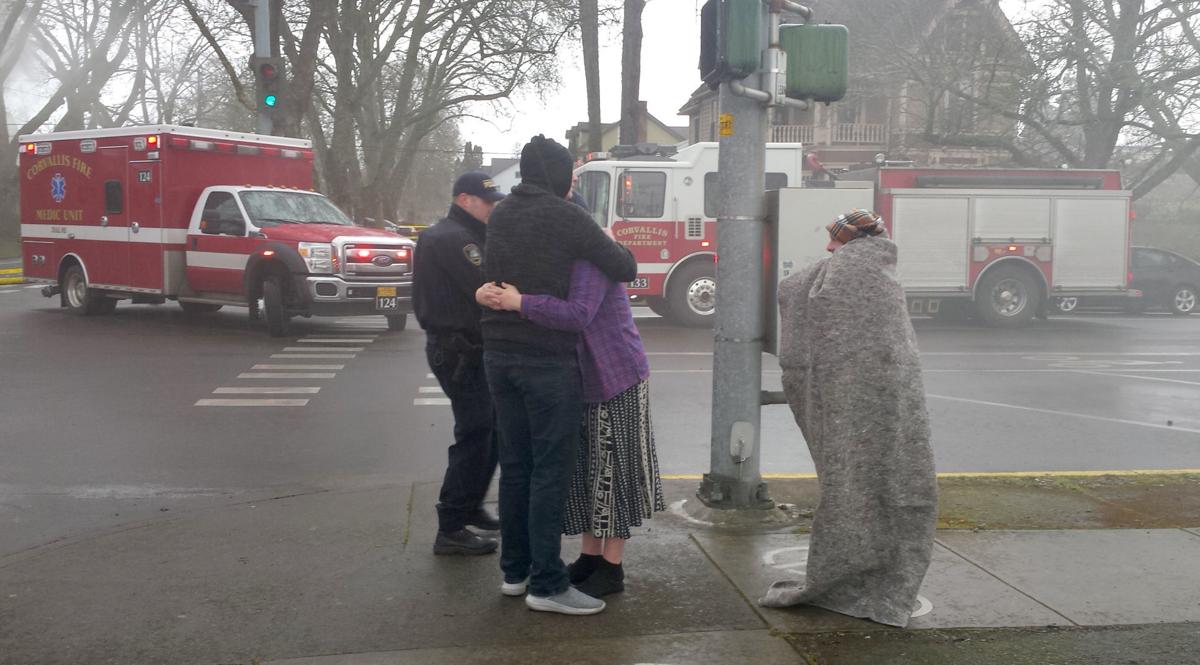 Residents of a rooming house at 554 SW Jefferson Ave. in downtown Corvallis huddle on a corner as crews battle a fire at the location on Friday afternoon. See more photos in the online gallery. 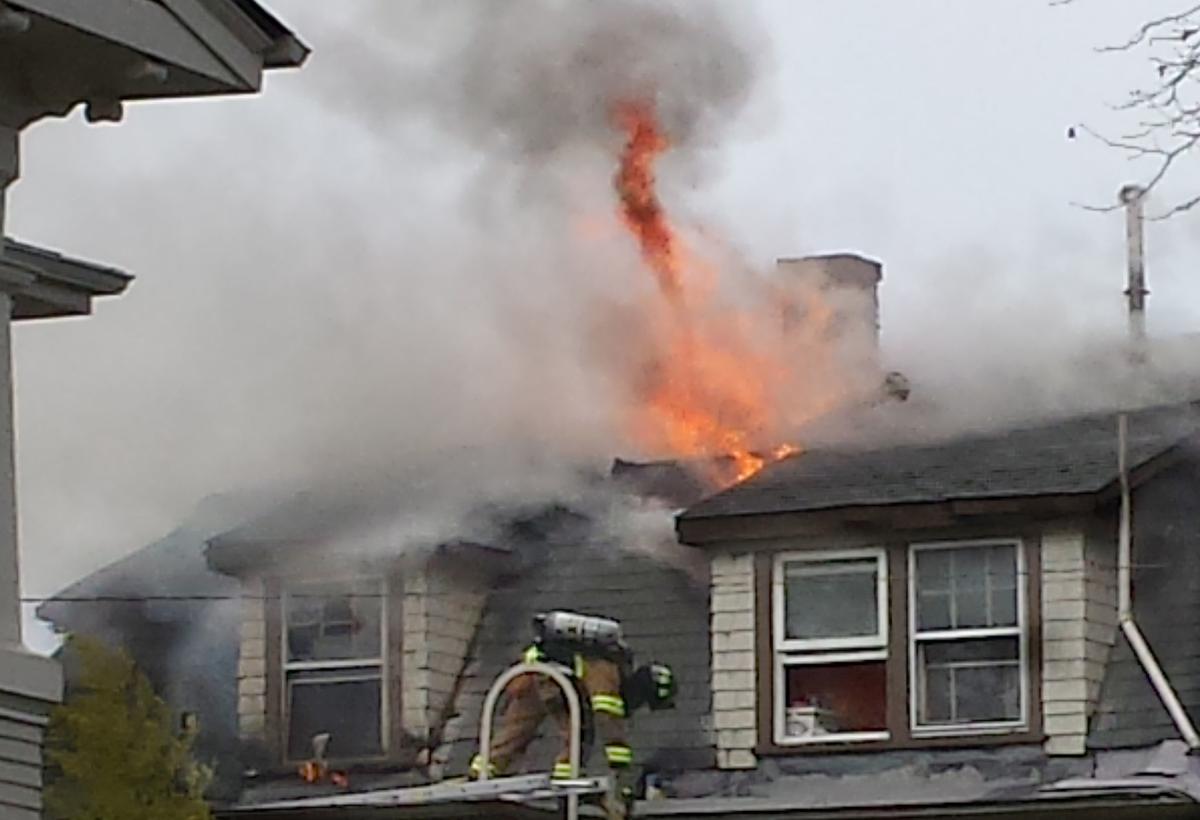 Flames shoot through the roof of the three-story wood-frame house. 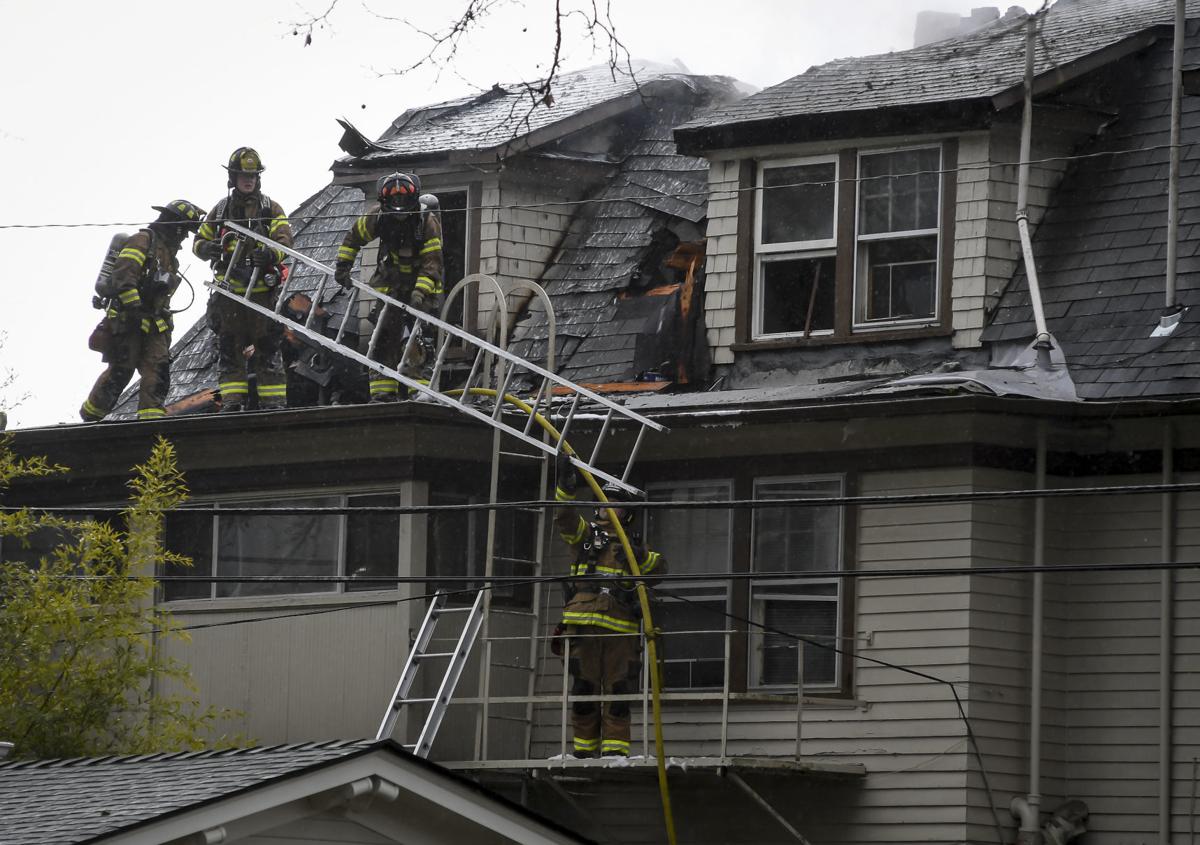 Firefighters handle a ladder on the upper level of a rooming house in downtown Corvallis following a Friday afternoon fire. 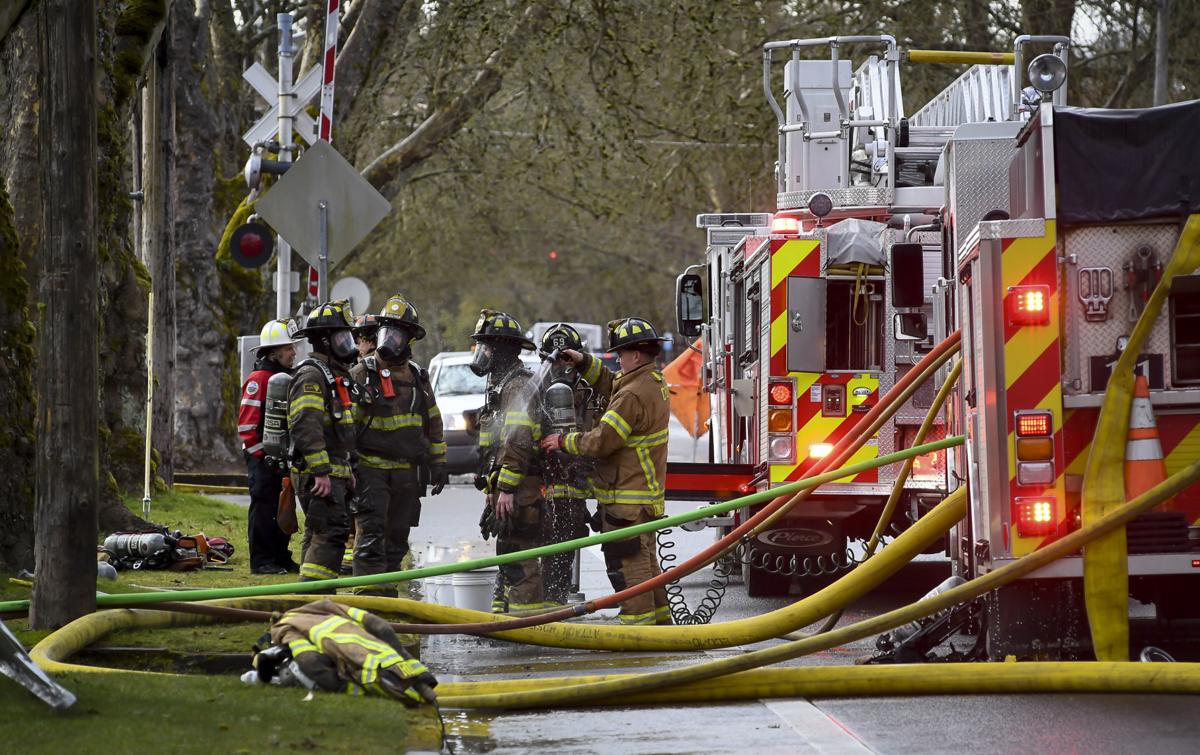 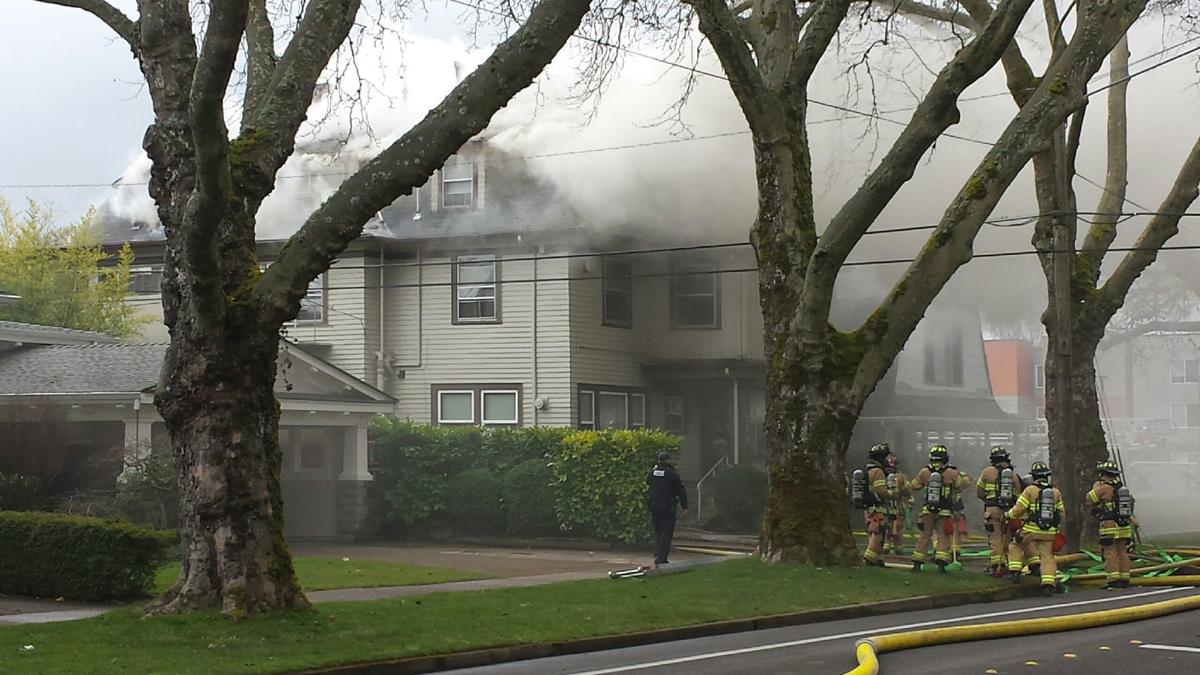 Firefighters responded Friday afternoon to the scene of a residential fire in the 500 block of Southwest Jefferson Avenue in Corvallis.

Firefighters rescued a woman from the roof of a burning building in downtown Corvallis Friday afternoon.

“She smelled smoke and saw smoke coming into her apartment, but she couldn’t get out the door to the hallway, so she had to go out on the roof,” said Jim Patton, a fire prevention officer with the Corvallis Fire Department.

“We actually raised a ladder up to her.”

The blaze broke out about 2:30 p.m. in a three-story wood-frame rooming house at 554 SW Jefferson Ave., sending thick clouds of choking gray smoke billowing into the tree-lined street.

Patton said the woman called 911 when she realized she was trapped by the flames, and an operator coached her to climb out a window onto the roof so firefighters could help her down.

“We can give credit to one of our dispatchers,” Patton said.

The woman’s name and age were not immediately available on Friday.

Patton said all 10 residents of the building were accounted for. All of those who were home when the fire broke out were examined by medics and some were treated for smoke inhalation, but there were no other injuries and no one required hospitalization.

Family members and the Red Cross were making arrangements to provide temporary housing to the displaced residents, he added, and the firm that manages the building was working to make more permanent arrangements. Firefighters were able to retrieve some of their personal belongings from the damaged building.

The woman who was plucked off the roof managed to bring her cat down with her, and Patton found another cat hiding under a bed.

“We saved the second cat,” he said.

“It was not easy,” he added. “She was not a cooperative patient, but we got her out.”

One more pet — a snake — was believed to be in the building, but Patton said the animal was probably safe.

The blaze was brought under control by about 4 p.m.

The fire started in a back bedroom on the ground floor and then climbed the outside of the building to the upper level, spreading throughout the third floor and into the attic, Patton said. He did not yet know what started the fire.

Red sheets of fire could be seen through open third-floor windows and gaps in the roof as smoke poured from the building Friday afternoon.

Firefighters equipped with breathing apparatus climbed the fire escape at the back of the building to attack the blaze, using axes to chop holes in the roof so hoses could direct water onto the flames.

Four engines and a ladder truck responded to the scene, along with an ambulance and at least one command vehicle.

The Corvallis Police Department cordoned off the area around the burning building and diverted traffic around the area.

Resident Monty Cole said he was watching television in his room when he heard someone yelling.

“I thought my TV was making noise,” he said, wrapped in a blanket and watching his home burn from across the street. “I heard somebody say, ‘Get out! Get out! Get out!’ I got out, and here I am.”

Occupants of nearby structures also were evacuated.

Patton said firefighters were not able to enter the third floor of the structure right away to attack the flames directly because the heat was too extreme.

However, he added, there was no immediate danger that the fire would spread to adjacent buildings.

Residents of a rooming house at 554 SW Jefferson Ave. in downtown Corvallis huddle on a corner as crews battle a fire at the location on Friday afternoon. See more photos in the online gallery.

Flames shoot through the roof of the three-story wood-frame house.

Firefighters handle a ladder on the upper level of a rooming house in downtown Corvallis following a Friday afternoon fire.

Firefighters responded Friday afternoon to the scene of a residential fire in the 500 block of Southwest Jefferson Avenue in Corvallis.