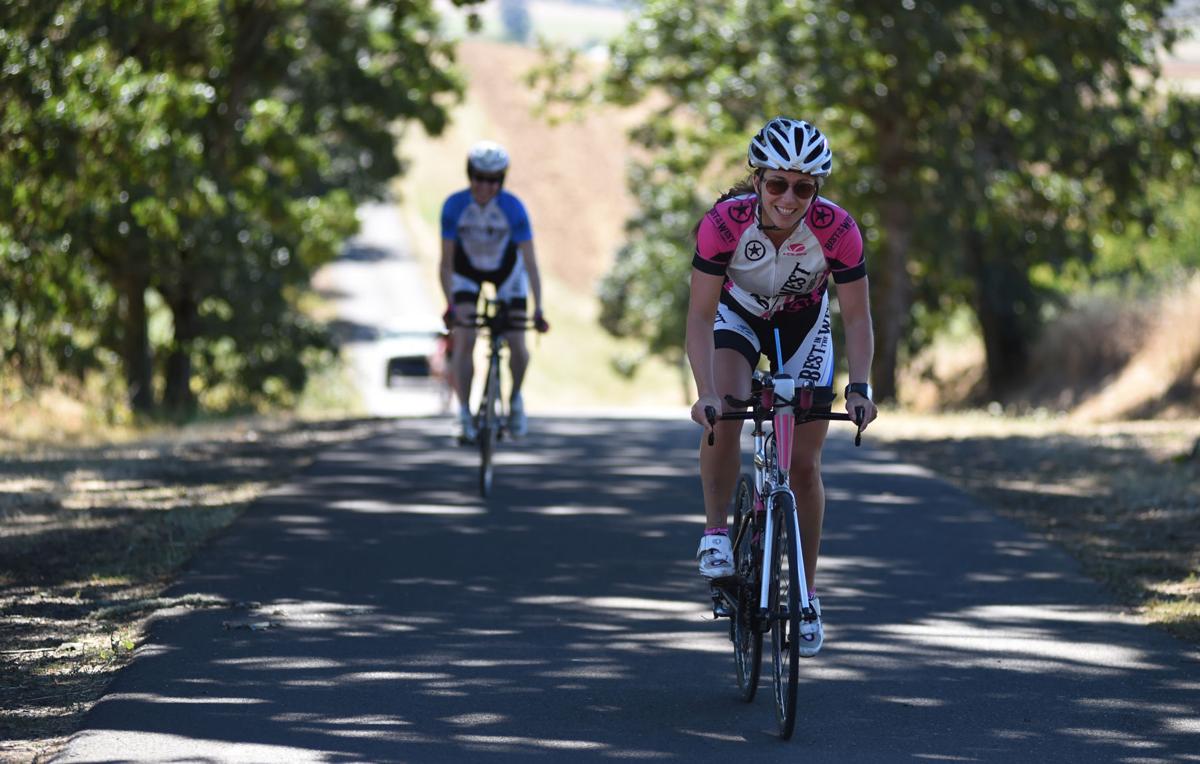 David Dixon, left to right, Erica McKenzie, and Mel Norland check the board with the teams' times during the Tri-Umph Relay on Saturday. 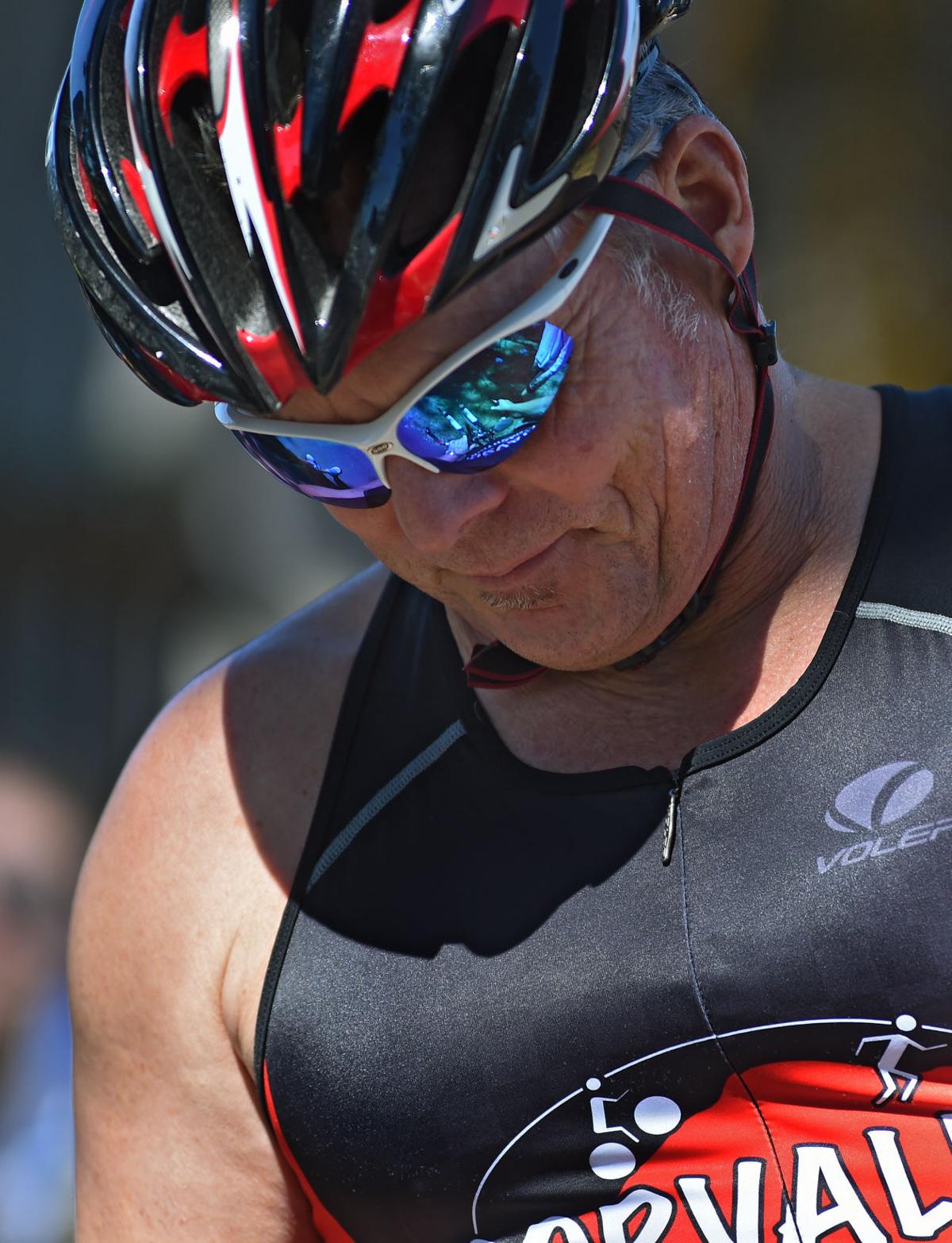 Tri-Umph Relay co-coordinator Chuck Cox gets ready for his lap in the bike race relay on Saturday. 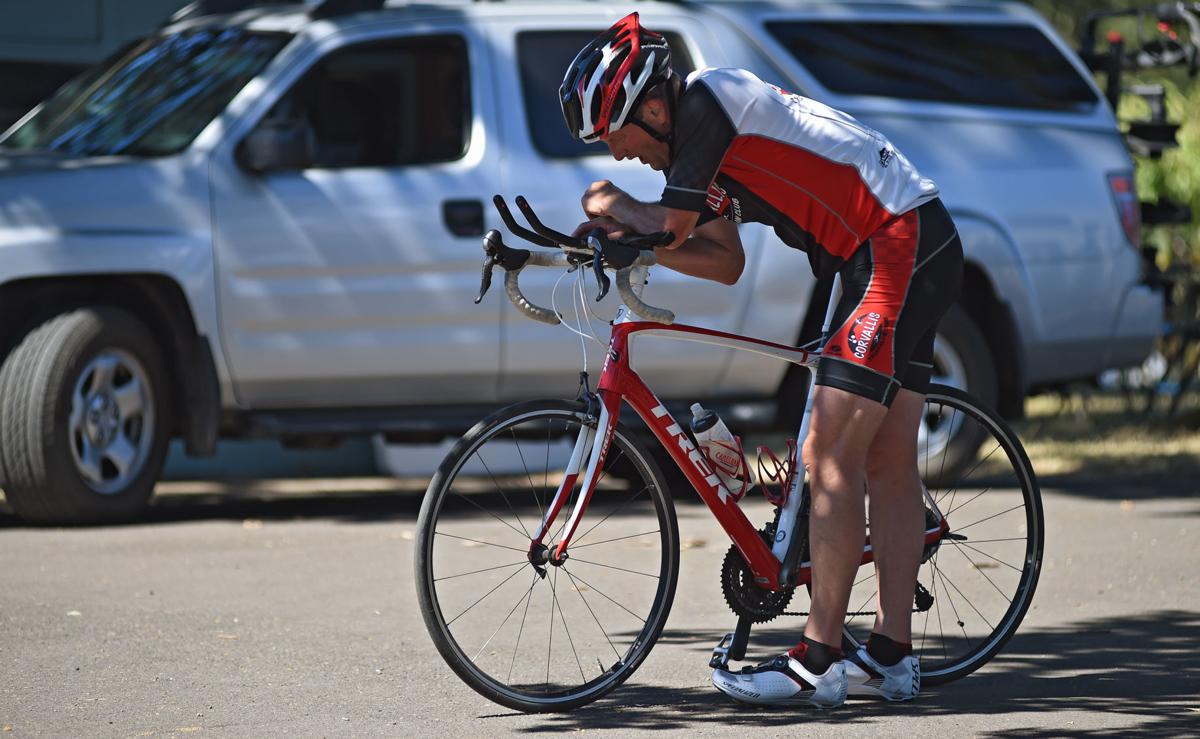 Tri-Umph Relay co-coordinator Bill Witt catches his breath after finishing his lap in the bike relay on Saturday. 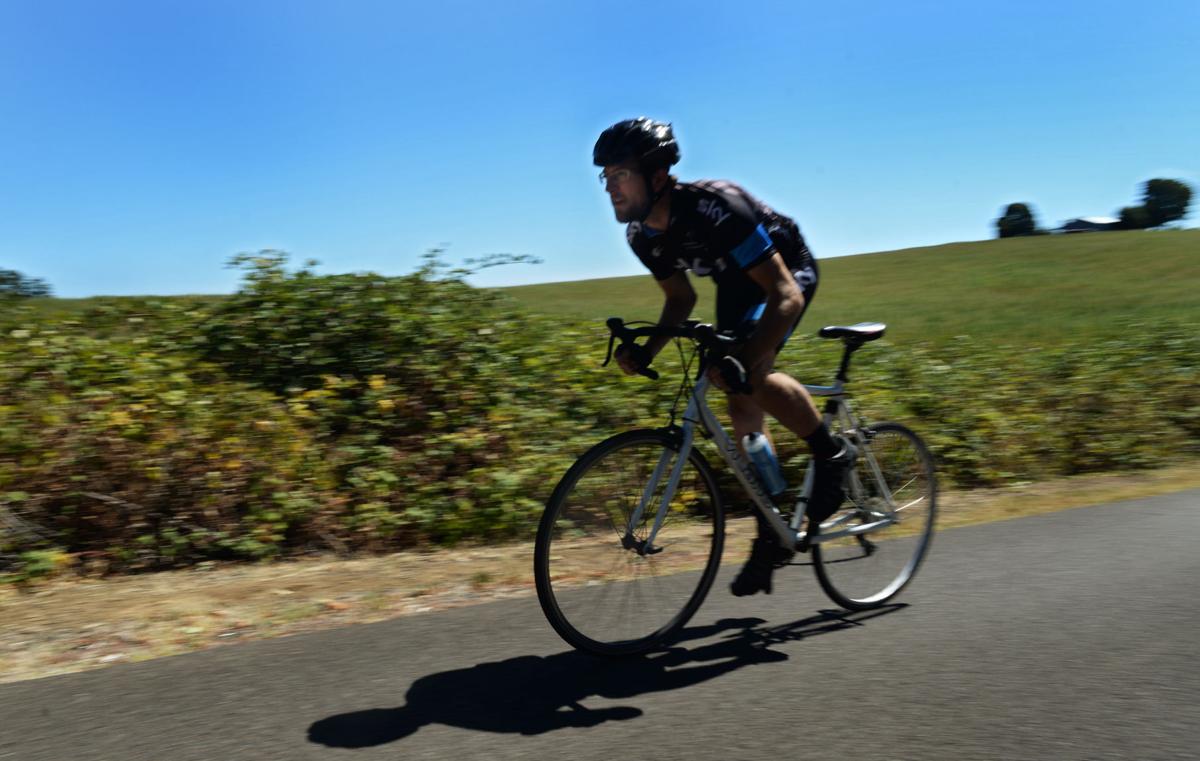 Chris Cotton participates in the Tri-Umph Relay on Saturday. 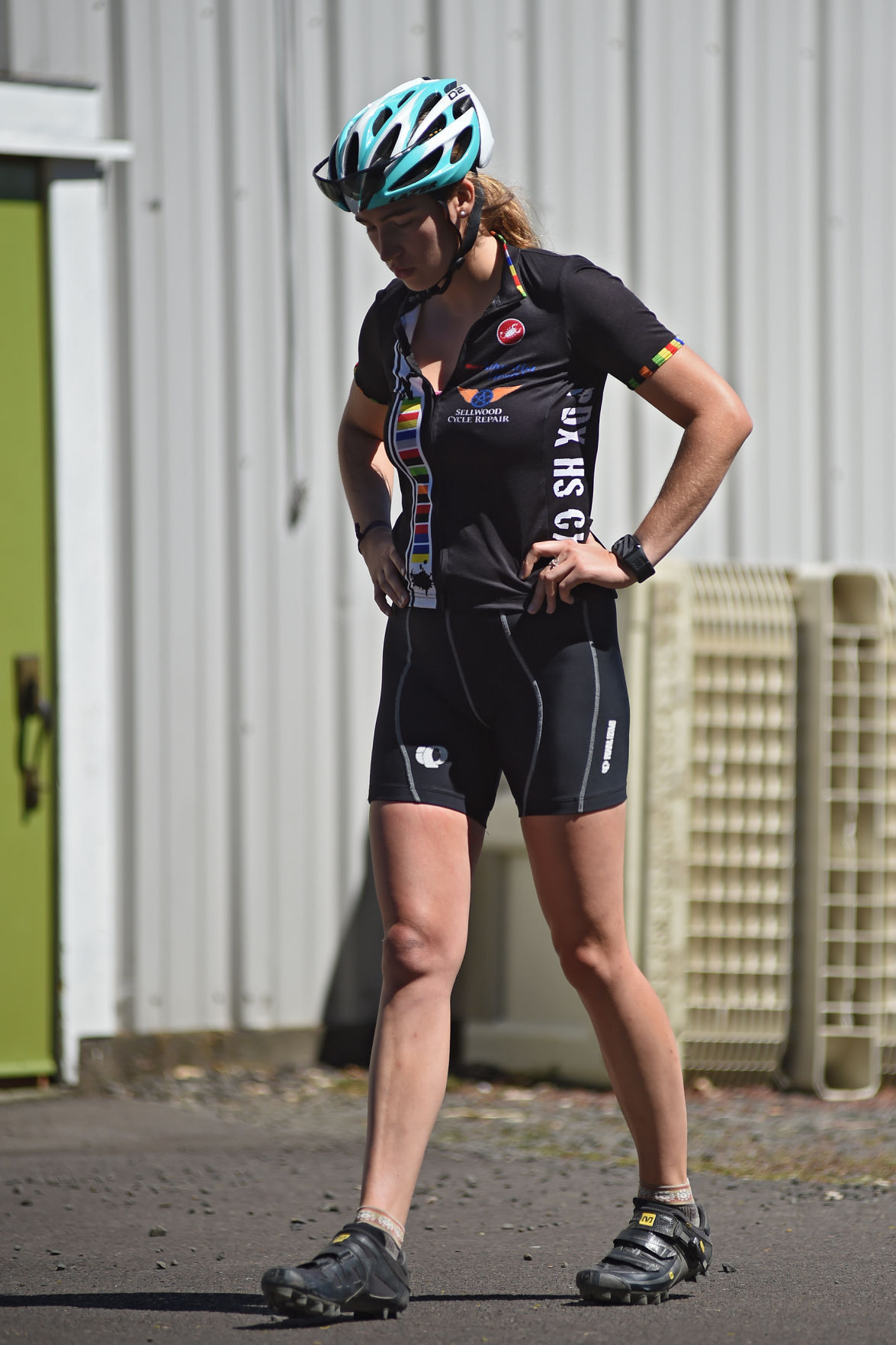 Anna Peterson gets ready for her second lap during the Tri-Umph Relay on Saturday. 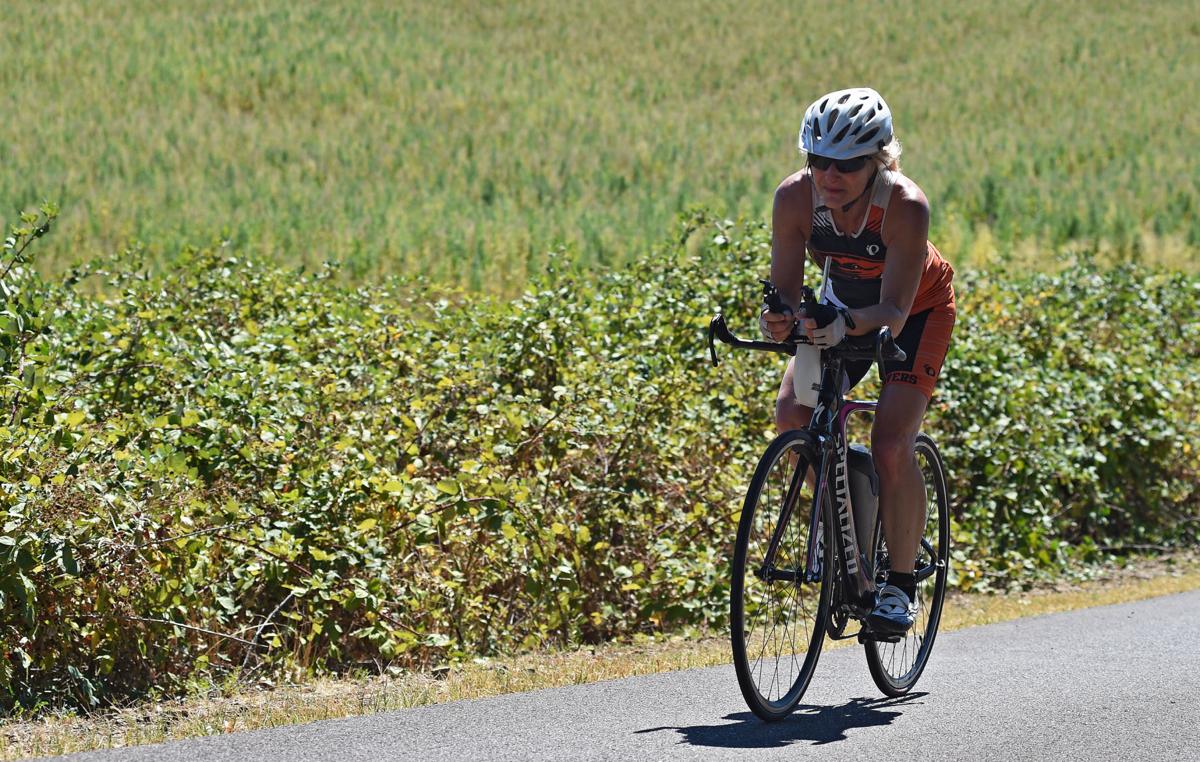 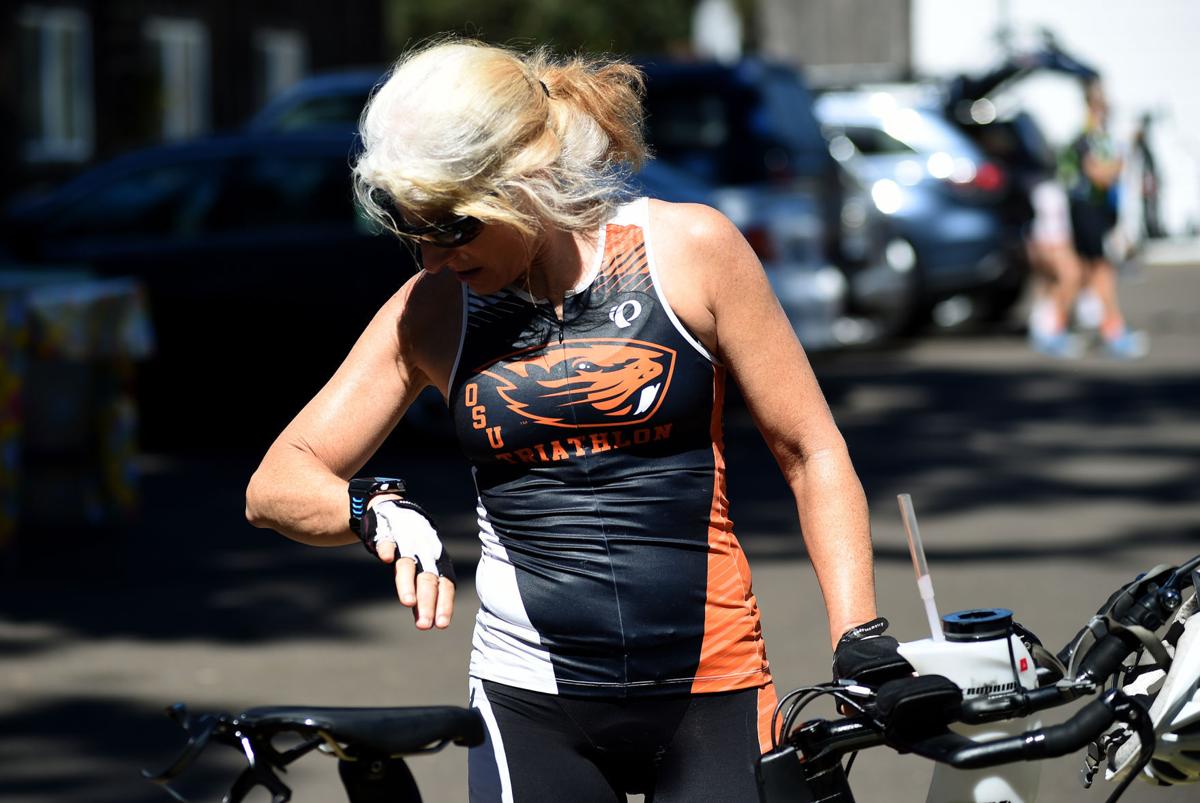 Giovanna Rosenlicht checks her watch for lap time during the Tri-Umph Relay on Saturday.

If you haven’t ridden a bike since you were a kid or if you aren’t a very good swimmer, you might be scared of trying a triathlon for the first time. But the Corvallis Tri-Umph Relay is no ordinary triathlon.

More than 40 racers took part in a new family-friendly triathlon, nicknamed “The Umph,” this weekend in Corvallis. The first-time event, organized by the Corvallis Triathlon Club with help from Best in the West events, featured full Iron-distances — a 2.4 mile swim, 112-mile bike ride and 26.2 mile marathon — with the relaxed and easygoing atmosphere more often reserved for a fun run. That’s because The Umph is a relay, which allows those intimidated by the extreme distances or one of the events to get a taste of a full triathlon with much smaller intervals.

“When people who have never done a triathlon hear about one, it’s scary, it’s intimidating,” said co-founder Bill Witt. “We wanted to create an event that was just the opposite. So we thought, let’s make a triathlon that’s friendly, open and accommodating to all people of all ages and abilities. Let’s bring some new people in and make it kind of a party, kind of a workout and kind of a race — but all fun.”

While Iron-distance triathlons require strict time limits of 17 hours and a single location, The Umph took place over three full days at three different locations intended to highlight the variety around Corvallis:

• On Friday, racers took part in the swimming at the Osborn Aquatic Center.

•  On Saturday, participants biked through the trails of Emerson Vineyards in Monmouth.

• And on Sunday participants ran a marathon around Brandis Farm in Corvallis.

The Umph, which emphasized fun and camaraderie over competition, is the brainchild of nearly a dozen Corvallis Triathlon Club members and local fitness enthusiasts. The event, funded in part by a grant from the USA Triathlon Foundation aimed at promoting the sport of triathlon, included collaboration from several local businesses and dozens of volunteers.

“Not one person was responsible for everything so The Umph became something for everyone and from everyone,” Witt said while gesturing to a group of a dozen racers cheering on participants from another team. “A few weeks ago, this didn’t exist and now people are cheering and encouraging each other instead of focusing on their own times. Now they’re not scared, and they’re not intimidated and they’re having fun. They’re Umphs.”

Corvallis’ Rebekah Thayer said she is an avid runner but almost never rides her bike or goes for a swim. But this weekend she tried all three and now says she’s not going back to strictly running.

“This was just an awesome way to welcome a beginner,” Thayer said. “I haven’t done a competitive swim in a long time, and I have a road bike that I’ve ridden once before, so I was pretty anxious going in. But this gave such a good flavor of each of these events and was the perfect way for me to get into biking and swimming again.”

Likewise for Eric Steltzer, who ran in this year’s Corvallis Half-Marathon, but was a beginner in both swimming and bike racing.

“I found out that I can’t really swim, so I’m thinking it’s time for an Osborn membership,” Stelzer said with a laugh. “But you emulate the people you associate with, and everybody here is outstanding. They are really good people to be around. It’s the kind of people I want to be with.”

After seeing the overwhelmingly positive response, Witt said he had no doubt in his mind The Umph was going to turn into an annual event.

“When you create something, you have no idea how it’s going to turn out,” Witt said. “But because of all of the people involved, it’s become something magical. The atmosphere is unique and relaxed, and people are having fun and rooting each other on and enjoying the day with their family and friends. That energy is intoxicating.”

Instead of departing to get some rest for the next day, Saturday and Sunday night featured family-friendly barbecues and live music.

“Traditionally, you take part in a triathlon and you get a hat or a t-shirt and you’re done,” Witt said. But on Sunday, after everything was said and done, participants received framed photos of their teams at each of the events.

“We wanted to make this something special and something where people could have a fun time together and celebrate that camaraderie. Now they have something that they can remember and hang in their homes or offices and show people that they are Umphs,” Witt said.

With participants ranging in skill from pros to beginners and ages 10 to 61, co-founder and run coordinator Chuck Cox said his favorite part about the Umph is its welcoming attitude to all.

“We’ve got pros and first-timers, fathers racing with sons and teams of five and single racers all cheering each other on,” Cox said. “I think once people find out how much fun it is, everybody is going to want to do this, and we’re going to see a huge surge in participation.”

A 32-year-old man faces multiple charges in an incident involving injuries to a child.

David Dixon, left to right, Erica McKenzie, and Mel Norland check the board with the teams' times during the Tri-Umph Relay on Saturday.

Tri-Umph Relay co-coordinator Chuck Cox gets ready for his lap in the bike race relay on Saturday.

Tri-Umph Relay co-coordinator Bill Witt catches his breath after finishing his lap in the bike relay on Saturday.

Chris Cotton participates in the Tri-Umph Relay on Saturday.

Anna Peterson gets ready for her second lap during the Tri-Umph Relay on Saturday.

Giovanna Rosenlicht checks her watch for lap time during the Tri-Umph Relay on Saturday.