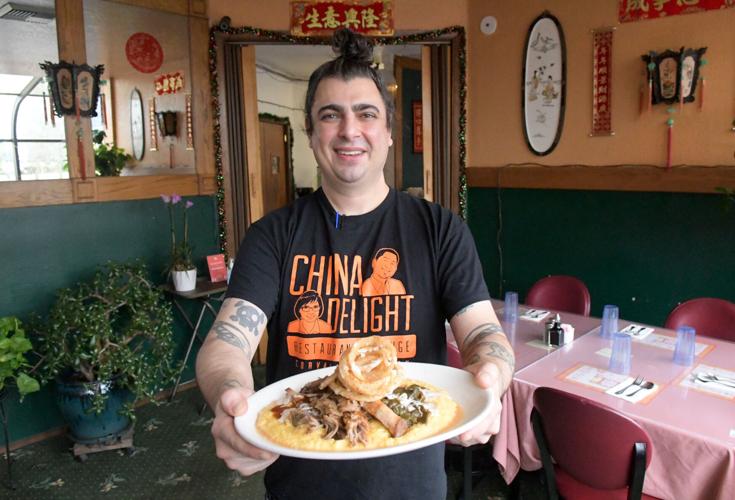 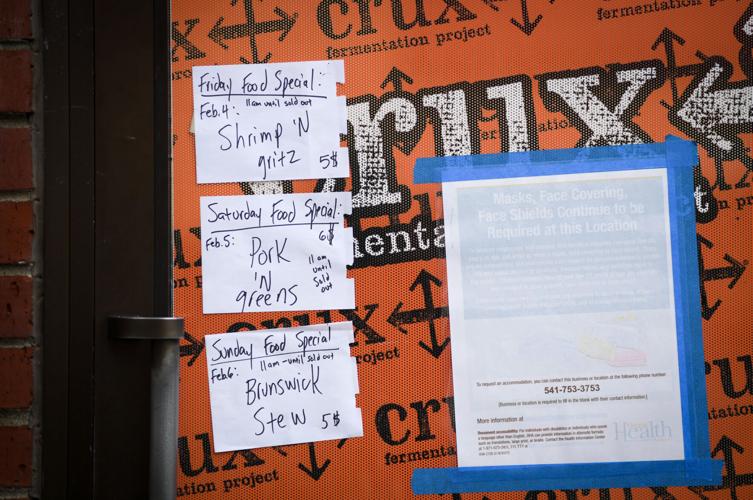 The Southern food menu posted on the door at China Delight. About 30 Southern-style meals are served on the weekends. “I feel like people here haven’t had truly cheesy, salty, delicious buttery grits before,” chef Nick Turner said. “I’m here to change that stigma.” 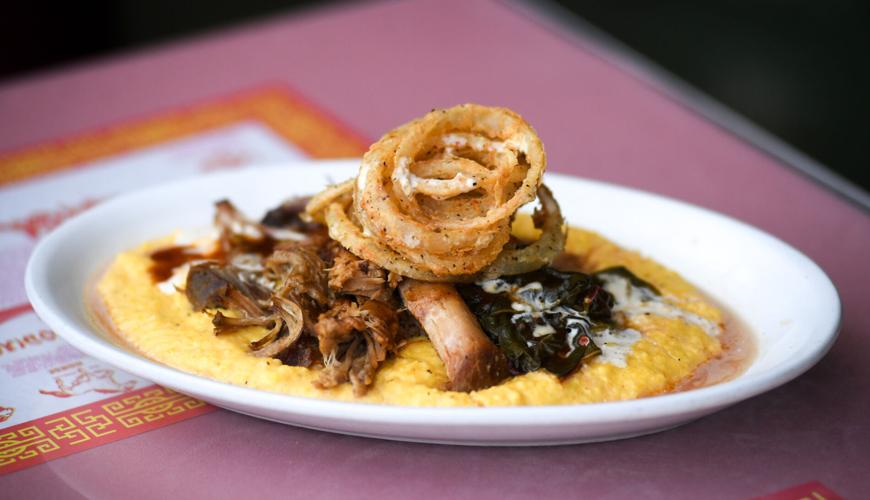 You can grab some pork 'n' greens at China Delight in Corvallis on Fridays, Saturdays and Sundays. 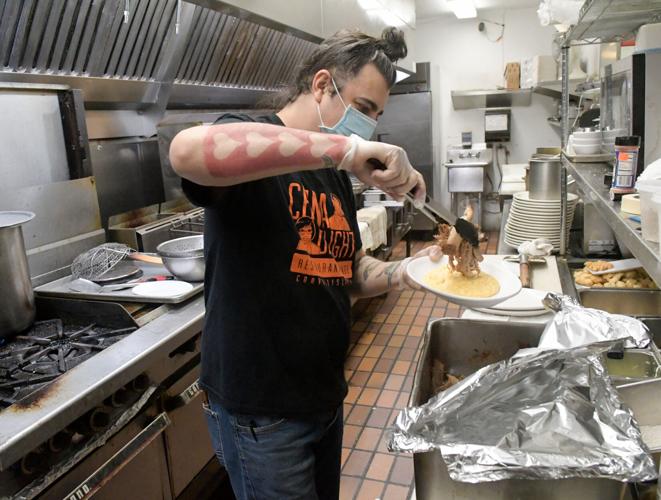 Nick Turner said he would love to own his own food truck, bar or any place that would enable him to continue his creativity with making food. 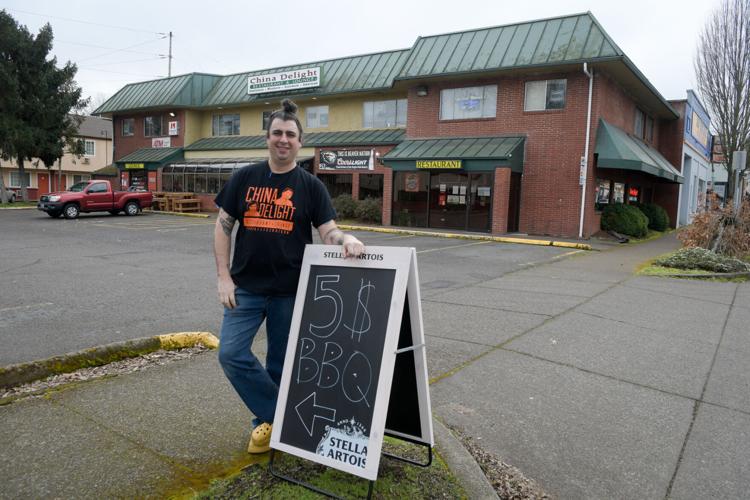 Most people don’t expect to see shrimp and grits on the menu when they go to a Chinese restaurant, but China Delight in Corvallis isn’t your run-of-the-mill eatery.

Located at 325 NW Second St., China Delight serves traditional Chinese food seven days a week, but patrons can expect something a little different on the weekends.

That's thanks to bar manager Nick Turner, an Alabama native, who cooks up authentic Southern soul food with a rotating menu Fridays through Sundays.

The 37-year-old cook was born and raised in Birmingham and moved to Oregon shortly before the pandemic. He said finding work at China Delight was like finding a diamond, because owners Jack and Esther Ng have been nothing but supportive of his culinary endeavors on the weekends.

“Having worked in four different states and having experience from hole-in-the-wall to white tablecloths, I’ve picked up ideas along the way that I thought would be successful,” Turner said. “Jack and Esther see the potential, and they believe in me.”

Turner’s father is from St. Louis and his mother is from Trinidad and Tobago, an island country of the southeastern West Indies. Turner described his Thanksgivings growing up as an “insane mix of Indian, Southern and Czechoslovakian food,” and those holiday meals are where the passion and idea of what food could be came from.

His first restaurant job was at a place called Uncle Sam’s BBQ when he was just 13 years old. Since then he’s done every job in the industry except  owning his own restaurant. But that dream may not be far off.

Turner said he would love to own his own food truck, bar or anything where he can be creative and continue the restaurant lifestyle he loves so much. He’d love to stay in the Corvallis/Albany area, though, where he’s been so appreciative of how quickly people have accepted him.

“I was on a journey to find a place outside Alabama, and I found the Willamette Valley,” Turner said. “It’s organic, and it’s real, and it’s so cool.”

So what all does this Alabama native cook up in the back of China Delight, you’re wondering? He’s constantly adding new items to the rotating menu, but the classics include shrimp and grits, dry rubbed ribs, pulled-pork sandwiches, collard greens, cheese grits, lima beans, baked beans, okra, jalapeño cornbread, potato salad and more.

Turner recently tried out something new at China Delight: a Brunswick stew with chicken thigh marinated in pickle juice and sweet tea.

“If I didn’t tell you that, you would never know there was pickle juice,” he said with a laugh.

If your mouth is watering at this point, don’t bother looking for the options on the China Delight menu; Turner’s advertisements for his cooking are entirely word of mouth, a sign out front of the restaurant and a text he sends out to his friends every Thursday.

He also said anyone who knows what they want can just find him in the kitchen and talk to him, and he’ll whip up something on the spot.

“The situation we have here, if you found this in any major city, would be something completely different,” Turner said. “I’m really happy here in Corvallis and Albany.”

Taylor Street Ovens, 1025 NW Ninth St. in Corvallis, will be closing its doors for the last time this week.

Tamales: A delicious Christmas tradition in the mid-valley

Here's what you need to know about this holiday fave.

As I primarily write education stories, my food and drink features often SPICE things up a bit! (Get it?) All right, puns aside, here are my f…

Two local elected officials are among those appointed to the state’s Local Officials Advisory Committee, which helps the Oregon Department of …

Gathering Together Farm near Philomath opened up a seasonal farm stand and restaurant March 15.

Corvallis-based 2 Towns Ciderhouse released a sequel to its number one selling single-serve craft cider in the country “Bad Apple.”

The Southern food menu posted on the door at China Delight. About 30 Southern-style meals are served on the weekends. “I feel like people here haven’t had truly cheesy, salty, delicious buttery grits before,” chef Nick Turner said. “I’m here to change that stigma.”

You can grab some pork 'n' greens at China Delight in Corvallis on Fridays, Saturdays and Sundays.

Nick Turner said he would love to own his own food truck, bar or any place that would enable him to continue his creativity with making food.