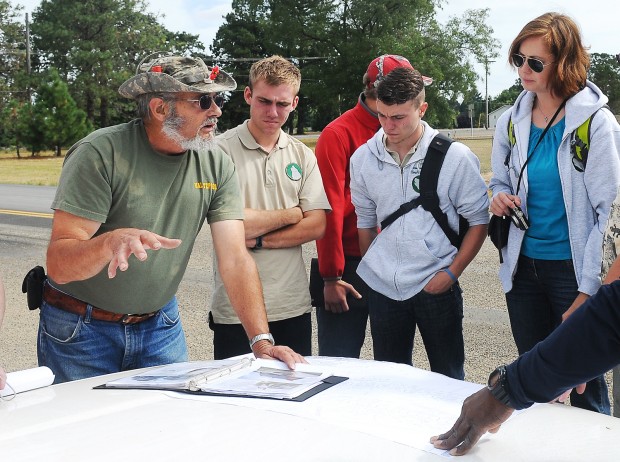 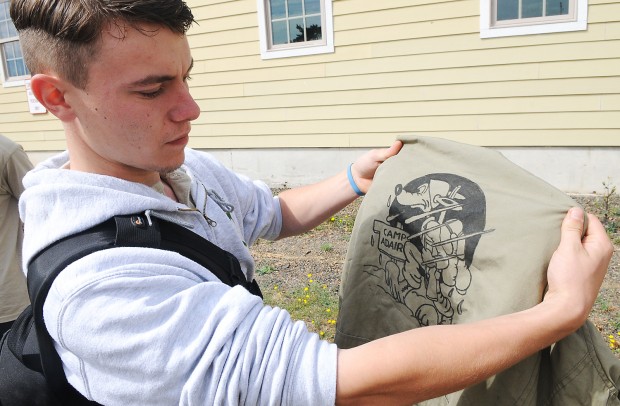 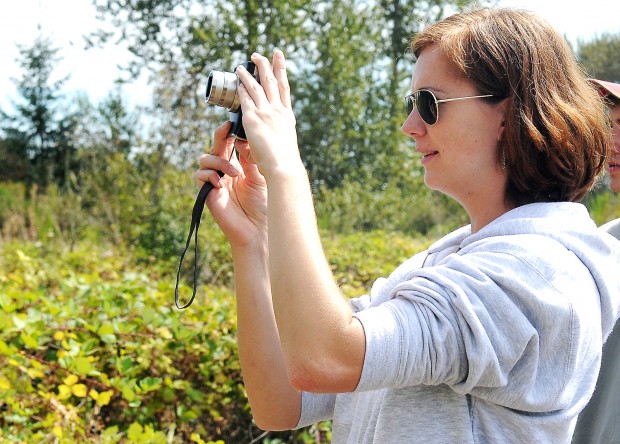 Esther Eenhuizen of Staanddaarbuiten, Netherlands, takes a photo of the buttresses of the Camp Adair field house Sunday afternoon. Eenhuizen's hometown was one of the villages liberated by the Timberwolves in WWII. (Jesse Skoubo | Corvallis Gazette-Times)

More than 68 years after liberation, families remain thankful to WWII soldiers from Oregon

In a bloody battle that began Oct. 23, 1944, soldiers in the the 104th Timberwolf Infantry Division crossed the Mark River in the Netherlands and pushed the Germans back, liberating the village of Standdaarbuiten.

One of the soldiers, William Jamieson, had been a rural mail carrier before the war, raising a family on a small farm north of Hillsboro. At age 25, he had never stepped foot outside Oregon and Washington. Yet in 1944, he was fighting the Germans in Europe, driving a Jeep mounted with a gun in the heavy weapons unit of the infantry division.

When he returned home at the end of the war, he talked little about his experiences, but his kids remember the Christmas cards they received every year from all over the country.

“It made us aware of how close my dad and his war buddies were,” Julia Jamieson DeLeo said, “that they continued to send cards for nearly 50 years.”

In a trip last fall, daughters Julia Jamieson DeLeo, 61, of Albany and, Mary Jamieson, 58, of Hillsboro followed the Timberwolves’ footsteps through France, Belgium and the Netherlands during the first half of the division’s tour in World War II.

Jamieson was taken aback by the attitude of the locals that she and the tour group met along the way.

“They lived it, they were occupied,” Jamieson said. “They are so grateful having been liberated. It’s so much more personal to them.”

On Sunday, the Timberwolf connection was brought full circle as the sisters took guests from the Netherlands and Belgium on a tour of Camp Adair to see where more than 100,000 American soldiers, including the Timberwolves, trained before landing in Europe.

The tour group parked along Camp Adair Road on Sunday and stepped over prickly arms of blackberry brambles to access a foundation lined with tall concrete buttresses rising from the ground.

Local historian Gary Richards showed them where the field house once stood, a building that soldiers used for large events. Six miles north of Corvallis, Camp Adair was a 57,000-acre Army cantonment that opened in mid-1942.

Esther Eenhuizen, 32, snapped pictures during the tour of what remains of Camp Adair. She’s from Standdaarbuiten, the Dutch village that the Timberwolves liberated in the Battle of the Dikes.

“Germans were just on the other side of the river, so it was a big fight to liberate my town,” she said. “Even though it’s a very small town, a lot of Timberwolves lost their lives there.”

As a member of her local remembrance committee, she has met Timberwolf veterans and their families as they toured Standdaarbuiten, as well as at Timberwolf reunions in the states in 2010 and 2011.

Like Eehuizen, Saedeleer feels a strong tie to the group who helped save his country from the hands of Nazi Germany.

“Thanks to the sacrifices of American soldiers and British soldiers — all of the ally soldiers — I’m not speaking German today,” he said. “It sounds ridiculous for some people, but it is true. The chance was there.”

The visitors toured other Timberwolf sites in Oregon and will travel to the annual Timberwolf reunion in Colorado during Labor Day weekend. As the veterans age, their children and grandchildren — “Timberwolf pups” — have taken over organization of such events, Mary Jamieson said.

“We want to be able to tell our families of their history,” she said. “We want to pass it on; we don’t want it to die.”

The Corvallis City Council moved closer to approving one of the largest developments in the city in at least a decade.

After the developers left, the property behind Lee and Sue Cutsforth's home on Northwest Ridders Lane was bare and bleak, scraped down to a ho…

Esther Eenhuizen of Staanddaarbuiten, Netherlands, takes a photo of the buttresses of the Camp Adair field house Sunday afternoon. Eenhuizen's hometown was one of the villages liberated by the Timberwolves in WWII. (Jesse Skoubo | Corvallis Gazette-Times)