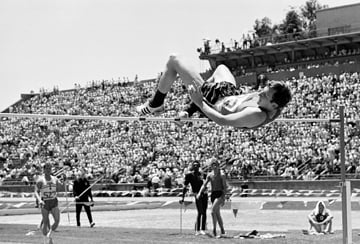 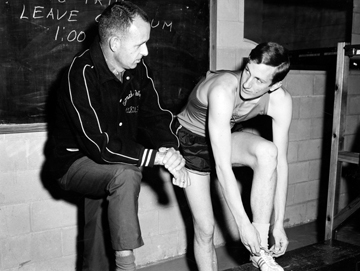 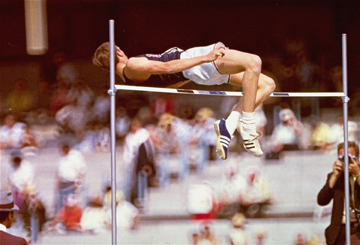 Dick Fosbury used his innovative flop technique to win the gold medal at the 1968 Olympics in Mexico City. (Associated Press) 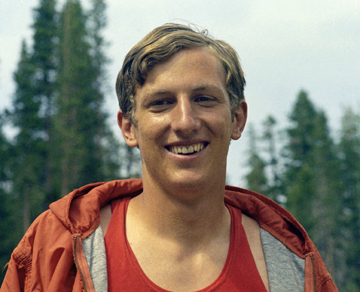 High jumper Dick Fosbury went down in track and field history for his development of what has become known as the Fosbury Flop. (Associated Press)

Competing in front of 80,000 spectators at the 1968 Mexico City Olympics, Oregon State University’s Dick Fosbury put on a spectacular performance in the high jump.

It startled them, surprised them and then, it amazed them.

Fosbury cleared 7 feet, 4¼ inches to win the gold medal in a performance that changed his sport forever.

“It started from Day 1, when I got back to Oregon State and fans started to tell me that I was going down in history and what I’ve done was phenomenal,” said Fosbury, who’s now 67. “The thing is, it took a generation to adopt as being proven as a technique that you can use, so it was gradual. It never ceases to amaze me because I still get recognized for something that I did, what — 46 years ago. And so, it’s still surprising to me.”

Fosbury started to develop his unique high-jumping technique before he ever arrived on the Corvallis campus. The flop’s genesis dates back to his high school days.

Fosbury was using the scissor technique when he joined the Medford High team, coached by Dean Benson, in 1963. Coaches tried to steer him away from the antiquated technique toward the Western roll, also known as the straddle.

“I felt I was falling behind, so out of desperation and frustration, toward the end of the season, that’s when I went to Dean and asked him for permission to go back to the scissors,” Fosbury said. “He said ‘don’t give up, it’s your choice.’”

Fosbury went back to the scissors and, during a meet at Grants Pass, reached a personal-best height of 5 feet, 4 inches. As the bar was raised, Fosbury began to drop his shoulders and lift his hips and butt. By the end of the meet, he had cleared 6 feet.

“I knew I had to change my body position, and that’s what started first the revolution, and over the next two years, the evolution,” Fosbury said. “During my junior year, I carried on with this new technique, and each meet I continued to evolve or change, but I was improving. My results were getting better.”

Fosbury continued to clear the bar at increasing heights, and his coaches no longer tried to stop him.

“Quite honestly, there was no model, nothing similar to what I was doing,” Fosbury said. “They really didn’t have anything to help guide me, only to encourage me.”

As a senior, Fosbury broke the school record, placed second at state, won a regional meet and then a national meet in Houston.

Oregon State’s new track coach, Berny Wagner, was a Stanford graduate who had success coaching jumpers at the high school level. He devised a plan that had Fosbury working on the Western roll in practice while continuing with the flop in freshman meets.

“He assumed that I would supersede what I was doing with my flop,” Fosbury said. “He allowed or encouraged me to use my technique in meets so I could score points for the team.”

The following season as a sophomore, Fosbury broke the school record by clearing 6-10 in his first varsity meet.

Wagner abandoned his plan of practicing the straddle.

“After the meet, Berny came up to me and said, ‘that’s enough.’ That was the end of Plan A, on to Plan B,” Fosbury said. “He would study what I was doing, film it and even start to try to experiment and teach it to the younger jumpers.”

By the spring of 1968, Fosbury was attracting national attention with his unique style.

He won back-to-back NCAA titles along with the Olympic gold medal.

“I remember watching black-and-white TV when Fosbury jumped,” said OSU track coach Kelly Sullivan, who was 11 years old at the time. “It was such a national story leading up to the Olympics, and then he actually won the gold medal.”

The Fosbury Flop became commonplace within 20 years after its introduction.

“The last straddler at the elite level was at the Olympic Games in 1988, when a decathlete jumped the same height I did in 1968,” Fosbury said.

Fosbury continues to contribute to track and field with his youth clinics around the country. He serves as vice president of the U.S. Olympians Association and established a chapter in Idaho.

At OSU, he serves as chairman of the fundraising committee that oversees construction of the Whyte Track and Field Center and efforts to reintroduce a full program that includes men.

“From my perspective, I have a responsibility to give back to the sport. I really love it,” Fosbury said.

Brad Fuqua is a sports copy editor and sports writer at the Corvallis Gazette-Times. He can be reached via email at brad.fuqua@lee.net.

• In 1964, a photo of Dick Fosbury’s backward-style high jumping hit The Associated Press wire and was published around the world. One newspaper’s caption proclaimed Fosbury, “World’s Laziest High Jumper.”

• In 2008, Fosbury was diagnosed with lymphoma and he underwent surgery and endured chemotherapy. A year later, he announced the cancer was in remission. “I’m doing well, I’m clear of cancer and I live in a healthy place in the mountains with a high altitude,” the 67-year-old Fosbury said last week when asked about his health.

• The Medford Mail-Tribune can be credited with first using the Fosbury Flop reference. “Fosbury Flops Over the Bar” appeared as a photo caption in 1964. A reporter then described in a track meet story, “Fosbury looked like nothing more than a fish flopping into a boat.”

• In 1968, Fosbury was the only high jumper using the flop. By 1972, 13 of the 16 finalists at the Munich Olympics were using it. Juri Tarmak of the Soviet Union won the gold, but also became the last non-flopper to win an Olympic medal.

• Fosbury earned a degree in civil engineering from OSU in 1972. He has lived in Ketchum, Idaho, since the mid-1970s where he founded an engineering firm. Earlier this month, Fosbury filed his paperwork to run for a seat on the Idaho House of Representatives.

In this episode of "Gold Medal Moments," Dick Fosbury explains how the Fosbury Flop came about and how it led his gold medal success at the 19…

Dick Fosbury used his innovative flop technique to win the gold medal at the 1968 Olympics in Mexico City. (Associated Press)

High jumper Dick Fosbury went down in track and field history for his development of what has become known as the Fosbury Flop. (Associated Press)