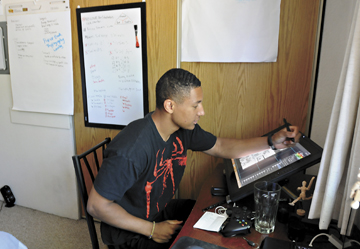 Former Beaver football player Steven Christian works on an art project on a tablet computer in his Corvallis apartment Wednesday afternoon. Christian, who will graduate from OSU on Saturday with a master's degree in interdisciplinary studies, is creating a three-volume graphic novel about the challenges faced by student-athletes as part of his thesis project. (Amanda Cowan | Corvallis Gazette-Times) 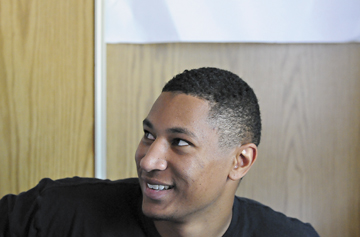 Steven Christian has a summer internship lined up at Oregon Health & Science University and plans to attend medical school. He's aiming for a research career in the prosthetics field. (Amanda Cowan | Corvallis Gazette-Times) 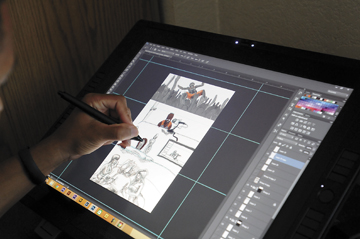 Steven Christian has launched a Kickstarter campaign to cover the cost of self-publishing his graphic novel, titled "No Love for Gladiators." (Amanda Cowan | Corvallis Gazette-Times) 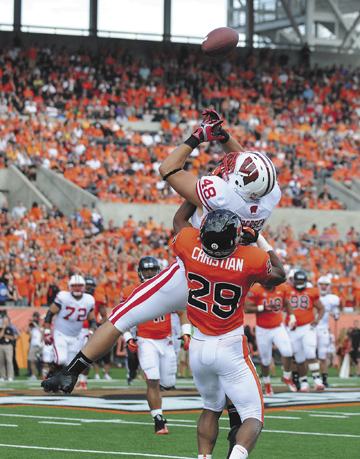 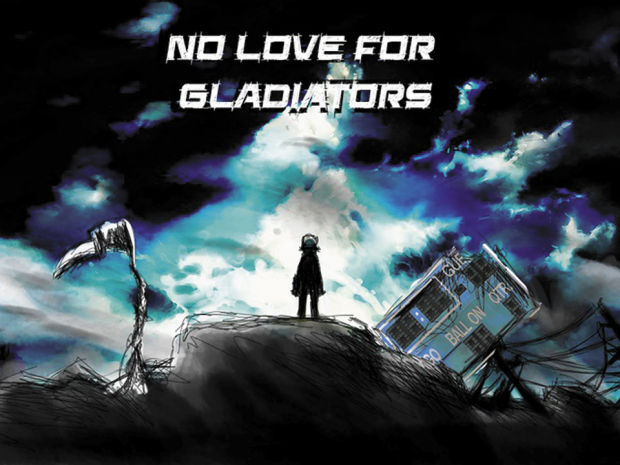 Steven Christian knows the highs and the lows of being a Division I college football player.

Coming out of high school in California, Christian was a talented player with a promising future as a cornerback. But after redshirting his freshman year at Hawaii, he missed two of the next three seasons with a pair of hip injuries that required surgery and extensive rehabilitation and left him wondering if he ever would play again.

He got the chance to get back on the field at Oregon State, where he transferred in 2012 and played two more seasons at safety after being granted an extra year of eligibility by the NCAA. While he wasn’t a star, he definitely made a contribution, including a key pass breakup to help preserve a win over Big Ten power Wisconsin in his first game as a Beaver.

Christian considered pursuing a life in professional football, but he decided against it after weighing up the long-term risks to his health.

“To me, it wouldn’t be worth it to push my body past its limit continuously,” he said. “It was a tough decision, but luckily I have a lot of backup plans.”

Christian earned a bachelor’s degree in psychology at Hawaii, and on Saturday he will collect a master’s in interdisciplinary studies from OSU with a focus in fine arts, psychology and sports medicine.

This summer he’ll do an internship at Oregon Health & Science University in Portland while gearing up to take his med school entrance exams. Ultimately he hopes to go into medical research, developing prosthetic devices to help amputees return to normal daily activities.

Meanwhile, he’s wrapping up work on his master’s thesis project: an epic three-volume graphic novel, “No Love for Gladiators,” that examines the challenges facing college athletes through the lens of a futuristic sport he calls Terraball.

“It’s a play on ‘terrible,’” he said of the game he invented.

As imagined by Christian, Terraball is a brutal, bloody sport that combines aspects of soccer and hockey, with more than a passing nod to the ultraviolent version of roller derby depicted in the science-fiction movie “Rollerball.”

“The goal is literally to get the ball from your side to the opposing team’s goal by any means necessary,” he said. “You can throw the ball, kick it, tackle people — it’s probably the most physical game you can imagine, without any limit on how you can score.”

Christian is not bitter about his own experience in college sports. The injuries he suffered, he says, are just part of the game — a risk he knowingly accepted. And he’s grateful for the educational opportunities he received in exchange for his services as a scholarship football player.

But he sees a glaring disconnect between the glamorized way student athletes are typically portrayed in the media and the sometimes harsh reality of their lives. With “No Love for Gladiators,” he wanted to expose some of the popular misconceptions about big-time college sports through a visual representation of his academic research into the impact of National Collegiate Athletic Association regulations on individual athletes.

“I was trying to find a way to tell a story that was generic but also specific to not only my life but to student-athlete life,” he explained.

Taking a page from his own experience, Christian talks about the frustration of not being able to sign up for pre-med classes because of scheduling clashes with his football obligations. As a result, he wound up having to cram many his most difficult classes into summer school.

That kind of hurdle, he said, can deter all but the most dedicated individuals from pursuing their academic goals and calls into question the whole notion of college athletes as students rather than employees.

“The NCAA prides itself on (the idea that) you’re a student first,” Christian said, “but if it conflicts with practice, workout times, things like that, you can’t take it.”

There are other sources of frustration as well. Athletes are discouraged by their coaches from holding jobs, he said, because of the fear of inviting NCAA sanctions, even though some players have no financial support beyond their scholarships. And those scholarships don’t always cover all the basics — at Hawaii, for instance, Christian said football players only got a full food allowance during the football season.

“I went to bed hungry plenty of times,” he said.

Health care is also a concern. While his hip surgeries were paid for, Christian said, his medical coverage ended when his scholarship ran out. He worries about what could happen if has problems with his hips down the road.

He’s not necessarily arguing for professionalizing college athletics, as some critics of the NCAA have suggested, but he does believe some reforms are in order.

“I think it would be a wise idea to pay student-athletes a salary, but their quality of life as a student should be better,” he said. “There should be certain things that should be guaranteed.”

Christian sees “No Love for Gladiators” as a way to give a voice to the frustrations and concerns of college athletes like himself. He’s launched an online campaign through the Kickstarter website to raise $1,000 — enough to cover the costs of self-publishing 50 copies of the 76-page first volume of his projected trilogy.

Any additional funds generated beyond the initial goal will go toward producing volumes two and three, and creating a multimedia version of the project, with animated sequences and audio clips to enrich the text and illustrations.

As of Thursday afternoon, he had collected $610 from 12 backers.

Albany politician Jo Rae Perkins was part of the mob that stormed the Capitol in Washington, D.C., last week but says she didn't enter the bui…

A Washington state police dog is recovering at Oregon State University after surgery for bullet wounds incurred Wednesday during a police chase.

Corvallis Culinary Month looks to give boost to local restaurants

Mid-valley adds 79 COVID-19 cases, with a death in Benton County

The mid-valley added 79 new confirmed and presumptive cases of COVID-19, the Oregon Health Authority announced on Wednesday, while the state a…

The Republican from Independence, who represents much of rural Benton County, made no apologies for his action.

Former Beaver football player Steven Christian works on an art project on a tablet computer in his Corvallis apartment Wednesday afternoon. Christian, who will graduate from OSU on Saturday with a master's degree in interdisciplinary studies, is creating a three-volume graphic novel about the challenges faced by student-athletes as part of his thesis project. (Amanda Cowan | Corvallis Gazette-Times)

Steven Christian has a summer internship lined up at Oregon Health & Science University and plans to attend medical school. He's aiming for a research career in the prosthetics field. (Amanda Cowan | Corvallis Gazette-Times)

Steven Christian has launched a Kickstarter campaign to cover the cost of self-publishing his graphic novel, titled "No Love for Gladiators." (Amanda Cowan | Corvallis Gazette-Times)