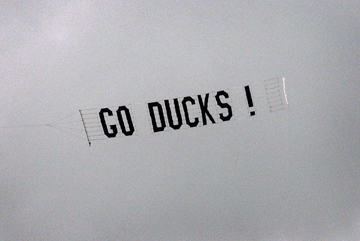 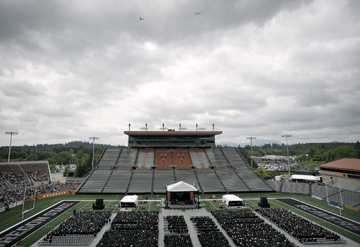 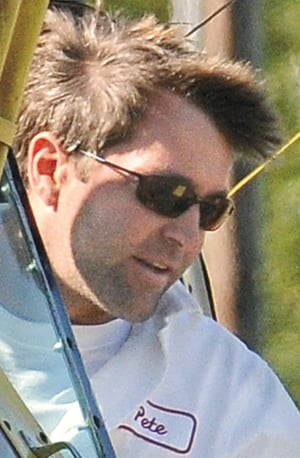 Pete Brawn, who piloted the plane towing a "Go Ducks!" banner over Reser Stadium during Oregon State University graduation ceremonies on Saturday, is under investigation by the Federal Aviation Administration. 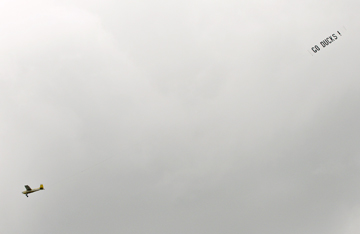 The Federal Aviation Administration is investigating the actions of the pilot who disrupted Oregon State University’s graduation ceremony on Saturday by circling Reser Stadium in a small plane towing a “Go Ducks!” banner.

Agency spokesman Allen Kenitzer declined to discuss any details of the probe, saying only that “the FAA is aware of this incident, and we are looking into it.”

While backers of the rival University of Oregon may have gotten a chuckle out of the stunt, fans of the OSU Beavers — especially the 25,000 or so new graduates and well-wishers attending the commencement exercises — were not amused.

The incident came in the midst of the keynote address by Ann Kiessling, a 1971 OSU grad who went on to become a leading biomedical researcher. Kiessling paused as the flyover sent a ripple of dismay through the crowd, then quickly recovered her poise, responding with a hearty “Go Beavs!” before resuming her talk while the plane continued to circle overhead.

“I think people were genuinely insulted, and actually embarrassed for people who support and root for the University of Oregon,” said OSU Vice President Steve Clark, a spokesman for the university.

“It wasn’t even the banner; it was flying over the stadium for five to seven minutes while people were celebrating and enjoying graduation,” Clark added. “It’s just unfortunate.”

The single-engine plane towing the banner did not appear to have any obvious markings, but it was quickly identified as belonging to Cascade Aero Banner, an Albany-based aerial advertising company owned by Pete Brawn.

An OSU alumnus himself, Brawn is a former Marine fighter pilot from Albany who left the service and started Cascade Aero after suffering severe injuries in a 2011 training accident that forced him to ditch his plane off the California coast.

He declined to be interviewed for this story, and so far he has not identified the person who hired him to fly the pro-Ducks banner over OSU’s graduation ceremony.

But his company’s Facebook page has been bombarded with comments — mostly negative, many openly hostile and some downright unprintable.

On Tuesday, however, Brawn posted a lengthy apology on the site, saying he showed bad judgment in accepting the job.

“We knew that the ‘Go Ducks !’ message would be controversial,” he wrote, “but we never imagined the depth of the offense our error in judgment has caused.”

That night he posted an addendum, announcing he would donate his $500 fee from “Saturday’s regrettable banner job” to Kiessling’s nonprofit scientific institute, the Bedford Stem Cell Research Foundation.

Oregon State also received an apology from University of Oregon President Michael Gottfredson, who called to express his regrets for the incident, Clark said.

As for Brawn, Clark said OSU has no plans to pursue any sort of legal action against him.

It doesn’t appear that Brawn violated any laws by circling the stadium. According to Corvallis Municipal Airport manager Dan Mason, stadium officials can ask the agency to issue airspace restrictions for specific events, something that’s a matter of course for Beaver football games but apparently wasn’t done in this case.

“As far as I know, no notice was put out about graduation,” Mason said. “Otherwise, (pilots) can fly down to 1,000 feet over the city.”

It’s possible, however, that Brawn might have committed a breach of FAA regulations by covering up or failing to display the aircraft identification number on his plane. The agency’s rules stipulate that all aircraft must clearly display a unique ID number, although that section does not specify the penalties for violations.

My name is Pete Brawn and I own and operate Cascade Aero Banner, a small business I started prior to being medically retired from the USMC.

On Saturday June 14th, 2014 I carried out a banner towing job over Reeser Stadium during the 2014 Graduation Ceremony; the same Reeser Stadium where I received my diploma in 2001. We knew that the “Go Ducks !” message would be controversial, but we never imagined the depth of the offense our error in judgment has caused. In hindsight, we should never have accepted the job. I want to apologize to all those whom we have offended, for our part in Saturdays regrettable event. I especially want to apologize to Dr. Keissling for stepping on her speech and the disruption we caused. I will contact her personally and express my deep regret. It is my understanding that she handled the annoyance with remarkable grace and poise. We are very sorry for any annoyance or disruption that impacted those in the stadium, both graduates and their guests. Please accept my sincerest apology. We exercised poor judgment.

As a gesture of our sincerity and genuine remorse, we are donating our $500 proceeds from Saturday’s regrettable banner job to The Bedford Stem Cell Research Foundation, of which Dr. Kiessling is the director. This can’t possibly make up for our transgression, but it wouldn’t be right for us to keep the money. From what I’ve learned on the foundation's website, they will put the money to very good use.

Froma Harrop: The credit for EVs is unusually well crafted

It isn't true that the new subsidies for buying electric vehicles will only benefit the rich. Even if it were, I wouldn't care.

Froma Harrop: When a story has little to do with the news

Interesting headline in The New York Times: "In an Unequal Economy, the Poor Face Inflation Now and Job Loss Later."

It is with a very heavy heart we announce the unexpected passing of Dakota Johnson of Corvallis, Oregon. He left this earth too early, at the young age of 26. Dakota was born in Missoula, Montana on Oct. 15, 1995. He was known for his quirkiness, and ability to put a smile on people's faces with his humor and sarcastic remarks. Although his life was too short, the impression he left on family and friends will never be forgotten. Dakota had extensive knowledge with technology but was very passionate about computers. In his free time, he often enjoyed fixing and rebuilding them or playing video games such as League of Legends. Dakota very much enjoyed skiing and was part of the Corvallis High School ski team.

Froma Harrop: What about those embryos?

Such is the state of the Republican Party that only eight of its 210 House members voted yes on a bill to protect the right to contraceptives. We're talking birth control.

In the end, Albany says yes to therapeutic mushrooms

Massive asteroid set for closest approach to Earth since 1914

Pete Brawn, who piloted the plane towing a "Go Ducks!" banner over Reser Stadium during Oregon State University graduation ceremonies on Saturday, is under investigation by the Federal Aviation Administration.