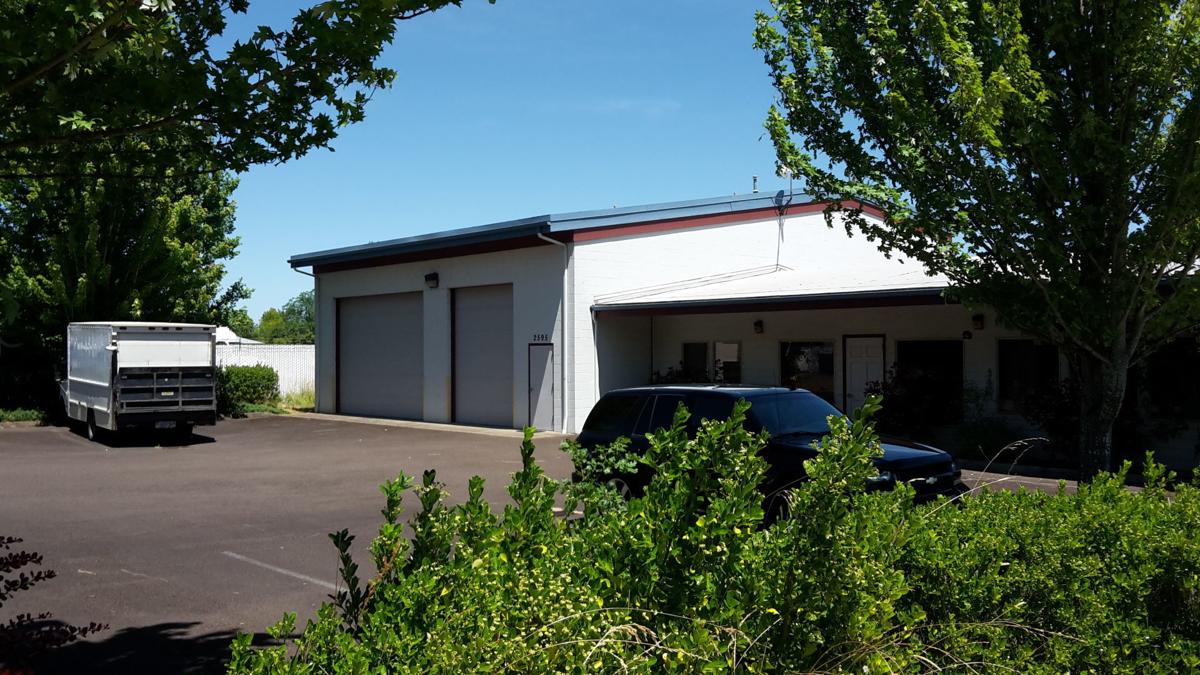 This is the building at 2595 NE Belvue St. that Rich Carone hopes to use as a temporary men's cold weather shelter. 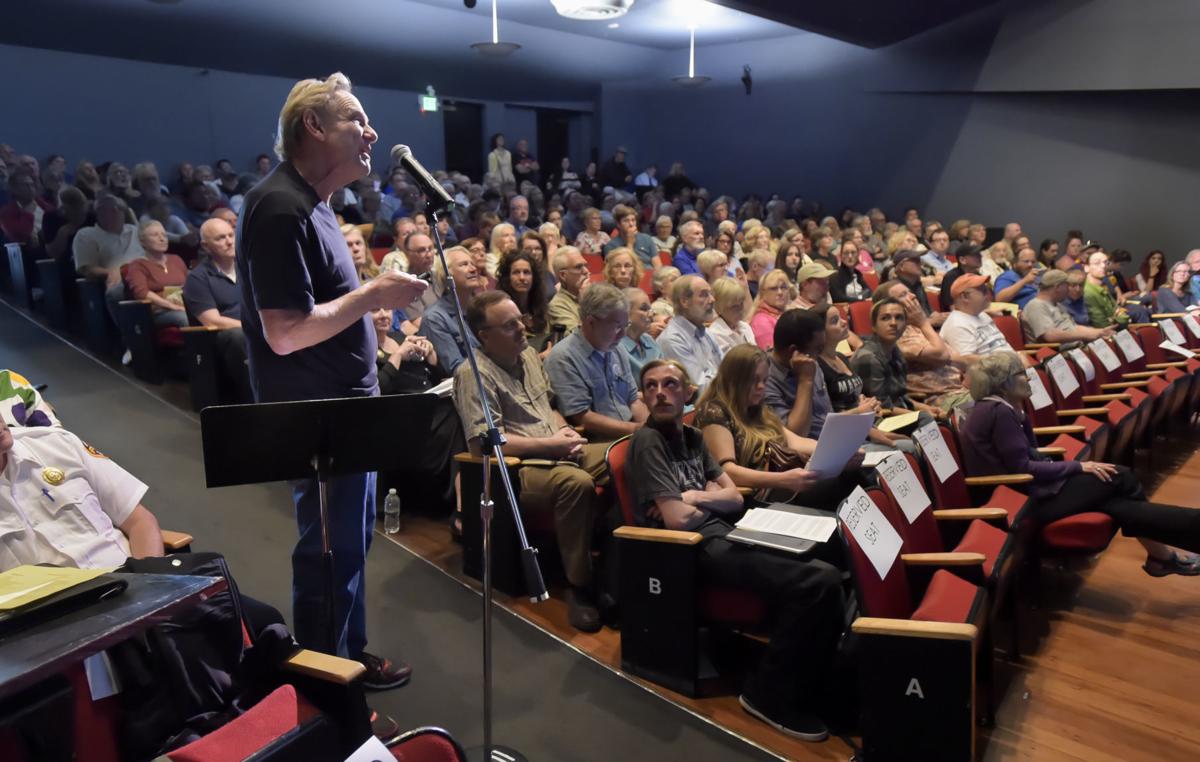 Developer Rich Carone presents his proposal for locating the men's cold weather shelter and other social services at a site in the north part of town. Carone and two other presenters briefed the City Council on their plans Monday night at the Majestic Theatre.

Corvallis developer Rich Carone has been involved in the battle against homelessness since 2009, when he began participating in the first city-county 10-year plan to end homelessness.

Now, he’s pitching a proposal to house the men’s cold weather shelter, the Stone Soup meal service and the Corvallis Daytime Drop-in Center at a property at the north end of town off of Northeast Walnut Boulevard.

Carone’s plan, discussed in public for the first time at Monday’s five-and-a-half-hour Corvallis City Council meeting, would temporarily locate the shelter in a remodeled building at 2595 NE Belvue St. for the 2018-19 season. At the same time, he and his investors would be working to construct an 18,000-square-foot facility that could house the shelter, Stone Soup and the drop-in center by the summer of 2019.

“This is the right thing to do,” Carone said Tuesday in a briefing with Gazette-Times editors and reporters. “It makes a lot of sense. Instead of a warehouse to put people in, we’ll have open space and other services.”

Carone is competing with a plan that would house all three services at a downtown building on Southwest Second Street. The plan was unveiled May 7 by Shawn Collins of the Housing Opportunities Action Council and representatives of Stone Soup and the drop-in center. The HOAC, chaired by Corvallis Mayor Biff Traber and Benton County Commissioner Anne Schuster, is charged with implementing the 10-year homelessness plan that Carone referenced.

Also in the mix is a proposal by engineer and downtown property owner Catherine Mater, who supports Carone’s long-term solution but seeks to use the old Flomatcher electronics manufacturing plant east of the Willamette River bridges for the coming shelter season. That plan has drawn opposition from Linn County officials, who say the area is not zoned for a social service use.

The plan by Collins, Stone Soup and the drop-in center also has drawn fire. Some community members are concerned about the impact on downtown businesses, while others assert that the 2016 City Council vote not to continue to fund the shelter on Southwest Fourth Street also should apply two blocks away at the Second Street site.

Carone said he is impressed with the way Collins and his operators managed the shelter last season at the old Hanson Tire Factory on Southeast Chapman Place.

“Shawn’s not a bad guy,” Carone said. “He has a solution. I have a late-arriving solution. And I need to win over Shawn. When it comes down to it, he is my (potential) customer.”

Carone also will need to convince Stone Soup and the drop-in center to sign on for his site. He admits that the geography is a bit daunting but notes that the parcel is just 2.1 miles via the bike path to Monroe and Fourth. "But they don't have a nice place with basketball courts and a garden," Carone said of the Second Street plan. "Why would (people) want to go downtown? If we make it nice enough, they might want to stay here."

Carone, who has real estate and business interests downtown, admitted “I’m biased” about the Second Street location. “It’s not a favorable spot with businesses I am associated with downtown," he said.

Carone, Mater and Collins were angling at Monday’s meeting for $60,000 that the city of Corvallis has set aside for shelter operations in its $157 million 2018-19 spending plan. Councilors are tentatively scheduled to decide who gets the money at its July 16 session. The three presenters also are slated to be on hand at a July 10 Benton County Board of Commissioners meeting at which $60,000 that the county is considering spending will be discussed.

Carone is correct about his solution being a “late-arriving” one. A proposal forwarded to the city for insertion in Monday’s council packet included Hanson, Southside Marine and an unidentified north Corvallis site as possible locations. By Monday night, he had updated the presentation, zeroing in on the 11-acre site north of Walnut at Belvue.

Carone hopes to use 2 acres for the shelter/social services facility, with space set aside for a garden, basketball courts, computers, medical and workforce facilities and transitional housing.

The price tag is approximately $4 million. Carone is investing an unspecified amount, while his other backers have not been identified. The parcel, which Carone and his backers have optioned for purchase, was rezoned in 2016 from general industrial use to a combination of mixed use employment and medium density residential housing.

Carone’s “dream” is to put higher density affordable housing and perhaps allow camping on the parcel, although both uses would require city approval.

When asked for his motivation, Carone said: “I’ve been screwing with this (homeless issue) for 10 years. I’m 70 years old and I don’t want to screw with it for another 10 years. I want to be dead when this comes up again.”

Carone also related an anecdote about a homeless woman who camps near the Korvis building he owns less than a half-mile away from the proposed new shelter site. He said he has regular interactions with the women and said she has never misbehaved or panhandled.

“All they want to do is be left alone,” Carone said. “If we give them just a little bit of a boost, they could turn into good people, productive people. Some people just wind up down on their luck.”

SALEM —The first major deadline of this year’s legislative session hit the Capitol on Friday, Feb. 7.

Late Monday night during a Corvallis City Council meeting that lasted 4 hours and 50 minutes, councilors passed four motions that might make i…

Van Buren Bridge may get reprieve

The fate of the Van Buren Bridge might not be a done deal.

Oregon Forestry agency says it will soon run out of money

Oregon is facing a dental health epidemic, and a lack of access to care is at the root of the problem for many children, rural residents and l…

This is the building at 2595 NE Belvue St. that Rich Carone hopes to use as a temporary men's cold weather shelter.

Developer Rich Carone presents his proposal for locating the men's cold weather shelter and other social services at a site in the north part of town. Carone and two other presenters briefed the City Council on their plans Monday night at the Majestic Theatre.