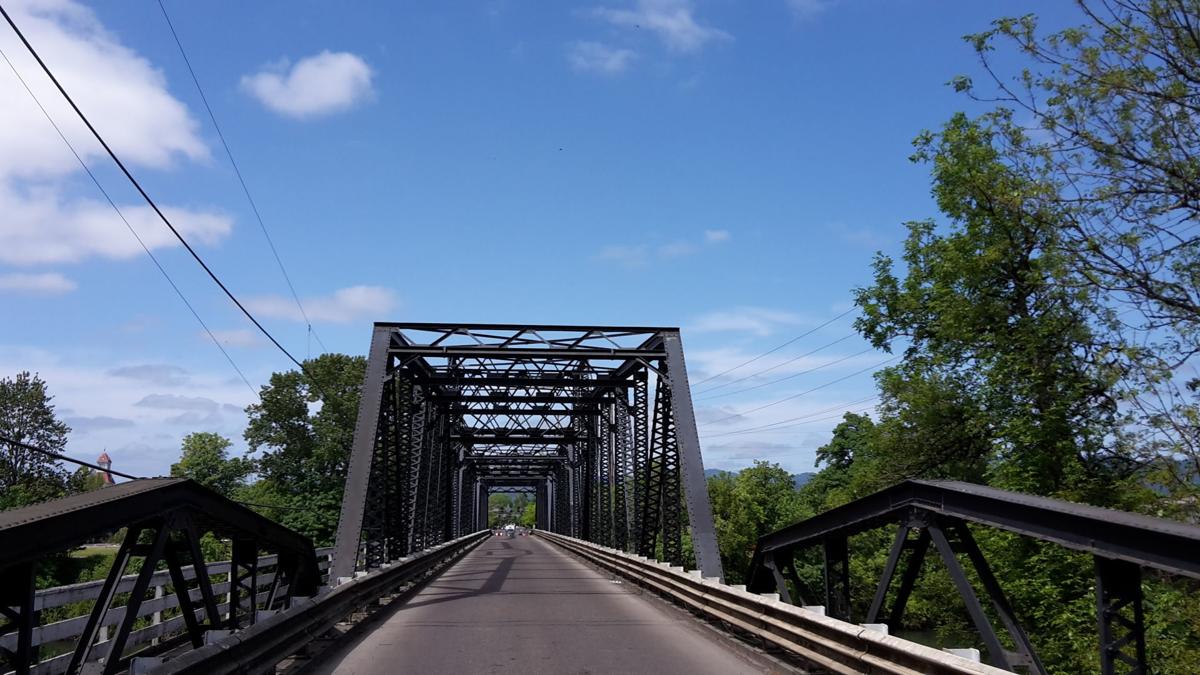 The Van Buren Bridge was built in 1913 and is seismically unsafe and functionally obsolete. Construction of its replacement is tentatively scheduled to start in 2022. 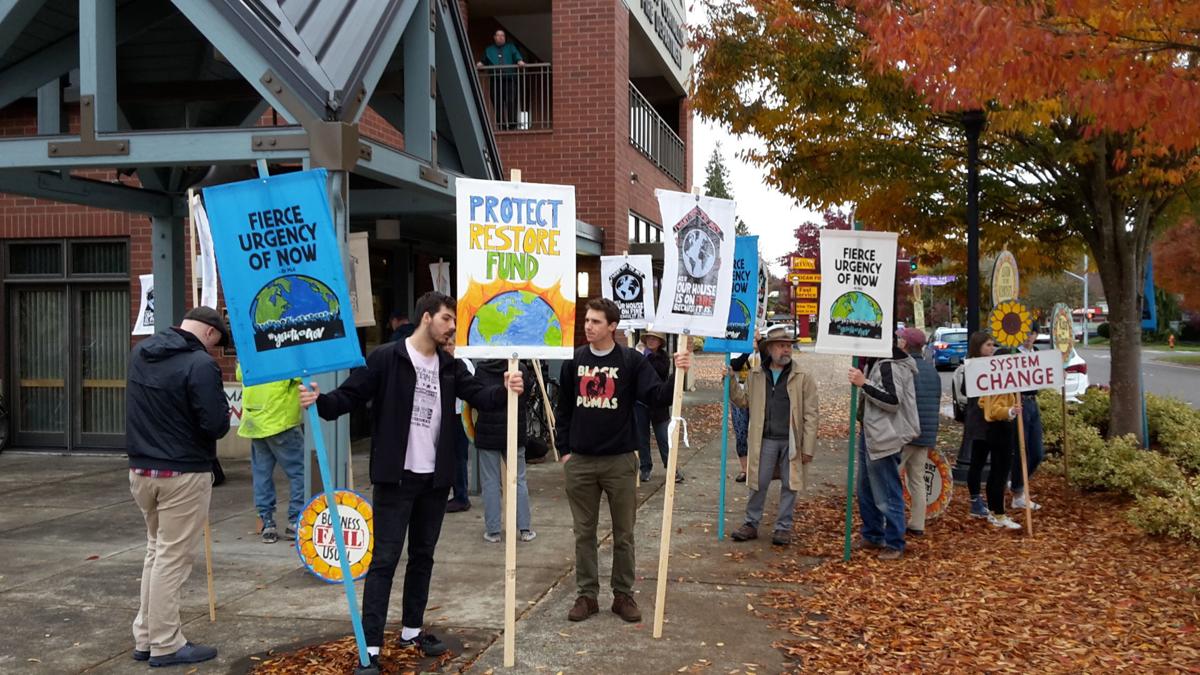 Residents carry signs about climate change issues outside the downtown fire station in Corvallis where the City Council met Monday night. Councilors voted 6-1 to back a resolution declaring a climate crisis.

The Corvallis City Council voted 5-2 Monday night not to retain ownership of the Van Buren Bridge.

The decision means that the bridge likely will be demolished as the Oregon Department of Transportation moves forward with a $69 million plan to design and build a new bridge over the Willamette River. ODOT had given the city an Oct. 31 deadline to make a decision because of the timeline required by the design, construction and funding. ODOT also said that no third party has come forward looking to acquire and move the bridge.

“This issue has always come down to money for me,” said Ward 9 Councilor Andrew Struthers, who made the motion not to retain ownership of the bridge. “Is this really a priority for us?”

Struthers was joined in the vote by Jan Napack (Ward 1), Charles Maughan (Ward 2), Hyatt Lytle (Ward 3) and Nancy Wyse (Ward 6). Voting no were Barbara Bull (Ward 4) and Charlyn Ellis (Ward 5). Ed Junkins of Ward 8 was absent, and the Ward 7 seat is vacant because of the August health-related resignation of Bill Glassmire. The vote came in the fourth hour of the meeting.

Struthers noted other work on the city’s plate, including a water master plan update and work on the South Corvallis Area Refinement Plan. He cited a potential $1.7 million cost to hire a consultant to guide city work to maintain the bridge should the city retain control.

“That number alone is daunting to me because of the other things we have going on in the city,” he said. “Keep it there or move it … it’s all going to cost us.”

Estimates of the cost of keeping and maintaining the bridge and raising it to meet Coast Guard requirements ran as high as $12 million to $15 million, although Bull and many of those who spoke during the public hearing that preceded the vote challenged the economic assumptions that were being put forward.

Bull suggested that a combination of ODOT mitigation funds, grants, working with the Coast Guard on the height issue and economizing on how the bridge was maintained could dramatically lower the cost.

She also claimed that the $1.7 million consultant fee that Struthers mentioned actually could cost as little as $30,000.

“What I keep hearing from the community is that residents want a new bridge but like keeping the old bridge,” Bull said. “We could keep it and not spend much on it. I can’t believe that we are saying it’s too expensive to keep a free bridge in place. That’s ridiculous on the face of it.”

The bridge vote followed a 67-minute public hearing in which 14 members of the public spoke. Eleven of those speaking recommended saving the bridge or postponing a vote. Two individuals testifying strongly urged making sure a new bridge is built, while one individual gave neutral testimony.

Key concerns of the save or postpone advocates mirrored those Bull offered when speaking against Struthers' motion during deliberations. Economic assumptions were challenged, ODOT processes were questioned, community input was said to be lacking and there were those who also challenged whether the bridge is seismically unsafe.

In another high-wattage matter,, councilors voted 6-1 to back a resolution declaring a climate crisis. The resolution was forwarded to the council by the city’s Climate Action Advisory Board. Napack cast the lone no vote.

Councilors also voted 7-0 with no discussion to approve a comprehensive plan amendment that will allow developers to build a storage facility on 5.14 acres of property on Northeast Walnut Boulevard. The council action was required because the zoning needed to be changed from low-density residential to general industrial to allow the project to move forward

Councilors were scheduled to deliberate on the proposal at their Oct. 7 meeting but chose to table any action because Lytle, who was away from Corvallis on vacation and participating via speakerphone, had trouble following the proceedings. The project sailed through the Planning Commission on a pair of 6-1 votes in July.

Background: The Van Buren Street Bridge, a swing-span steel motor one-lane vehicle bridge across the Willamette River, opened in 1913. It was the first bridge across the river in Corvallis and is the third oldest bridge anywhere on the river. The bridge no longer is able to swing open and was declared “functionally obsolete” in the 1970s. It is seismically unsafe, as are the Harrison and bypass bridges over the Willamette.

Timeline: ODOT has $69 million to spend on designing and replacing the bridge. The money came from a $5.3 billion state transportation bill passed in July 2017. Concept designs are due by the end of 2019, design development will take place in 2020 and 2021, and construction is tentatively set to start in 2022.

Get Election 2020 & Politics updates in your inbox!

Keep up on the latest in national and local politics as Election 2020 comes into focus.

Here is an artist's rendering of what a replacement Van Buren Bridge might look like. The new Van Buren span is on the left and the Harrison B…

The city of Corvallis is scheduled to make a decision on the fate of the Van Buren Bridge at its 6 p.m. meeting Monday at the downtown fire st…

Deadline day for the Van Buren Bridge is Oct. 21.

Move it or lose it.

An open house on the project to replace the Van Buren Bridge is set for 4:30 to 6:30 p.m. Thursday at the Tunison Community Center, 365 SW Tun…

Corvallis gets update on bridge replacement

The Corvallis City Council received an update Thursday from the Oregon Department of Transportation on the replacement of the Van Buren Bridge.

The Corvallis City Council is scheduled to take another whack at a decision on the fate of the Van Buren Bridge at its 6 p.m. Monday meeting.

The Van Buren Bridge was built in 1913 and is seismically unsafe and functionally obsolete. Construction of its replacement is tentatively scheduled to start in 2022.

Residents carry signs about climate change issues outside the downtown fire station in Corvallis where the City Council met Monday night. Councilors voted 6-1 to back a resolution declaring a climate crisis.