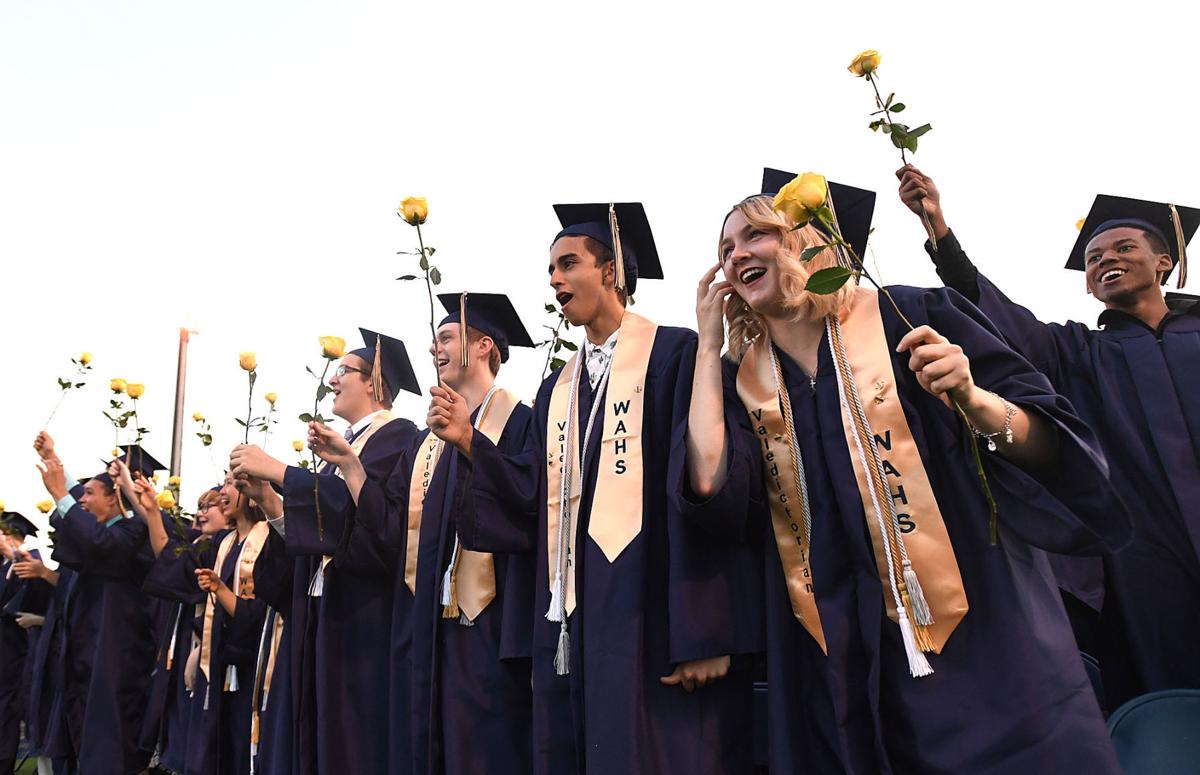 West Albany graduates celebrate during commencement ceremonies at Memorial Stadium in June of 2018. A state report released on Thursday shows that the Bulldogs have some of the top graduation rates in the state. 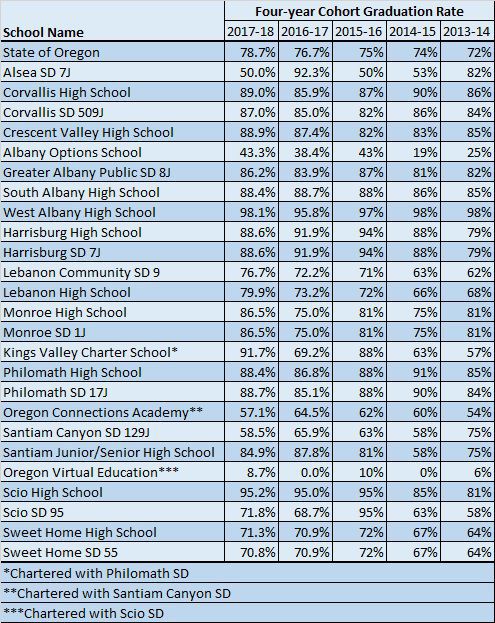 The on-time graduation rate for the state of Oregon rose to nearly 79 percent in the 2017-18 school year, data released by the Oregon Department of Education Thursday morning show.

The improved graduation rate caps more than five years of growth for the state, which has for years struggled with one of the worst four-year graduation rates in the country.

Graduation rates for all Linn and Benton county public high schools for the last five years can be viewed in the chart accompanying this story.

The mid-valley’s top performer on graduation rates was West Albany High School, which graduated more than 98 percent of its students on time. Of schools with senior cohorts of more than 50 students, this was the fourth best on-time graduation rate in the state and represented an increase of about 2 percentage points over the previous year.

South Albany High School’s on-time graduation rate was about 88 percent in 2017-18, which was down less than a percentage point from the previous year.

Lisa Harlan, the Albany district’s assistant superintendent, said the Options School’s performance is better captured by its completer rate, which includes students who earned a GED diploma. The school’s four-year completer rate was about 78 percent.

Harlan said the district’s high schools have worked hard to help each student as an individual to reach graduation.

“I’m really proud of our high schools. We have really high and strong graduation rates in this district.”

“Staff is pretty hungry to see the moment when every student graduates,” she said.

“It’s exciting for us to be continuing to increase those rates. We are really looking forward to hitting 90 percent,” he said.

Noss said the district’s graduation rate has increased because its staff is working hard to build relationships with students.

“It’s just a continuous focus. I’d really like to recognize the work of staff across our district, from elementary to middle and high school,” he said.

“We know with access to real world learning, kids are more engaged,” he said.

Also in Benton County, Philomath High School graduated more than 88 percent of its students on time in 2017-18, up from an on-time graduation rate of about 87 percent the previous year.

Philomath Superintendent Melissa Goff attributed the performance to a focus on each student.

“We’re pleased we’ve continued to have high grad rates,” she said. “We continue to be leaders in our graduation rate in the area. We really attribute that investments we’ve made and the personalization to every kid.”

Goff said the improved performance at Philomath High School follows strategic investments the district made in the school, such as adding a new special education teacher. She said this year the school has also added an AVID college preparedness class for freshman and a new student success coordinator that she expects will help the school continue its graduation rate growth.

Goff added that she was pleasantly surprised to see such a turnaround in the four-year graduation rate for students in poverty, which jumped to more than 95 percent in 2017-18, from about 73 percent the previous year.

“That is something we will study,” she said. “That’s a change in trajectory for us, so we’ll want to look at that.”

Goff said Philomath school staff are proud that the graduation rate has consistently been high from year to year.

“The primary thing is we have an extremely strong teaching and support staff and they are highly dedicated to the success of each student,” she said.

Benton County’s smaller districts, Monroe and Alsea, saw some swings in their graduation rates in the data.

Tom Yahraes, superintendent, said the district has implemented new measures such as a chronic absenteeism team and a care team focusing on struggling students in grades 10 to 12 to improve graduation rates.

“Sweet Home High School has implemented a number of dropout prevention systems this year to increase graduation rates, helping more students succeed in being career and college ready. We have implemented a freshman focus team, a summer school recovery program, and have strengthened our career and technical education programs, which show higher cohort graduation rates.”

However, Yahraes said these things take time to have an impact on graduation rates — although he believes the school’s reduced dropout rate shows they are having an impact. State data shows that the dropout rate in Sweet Home in 2017-18 was under 4 percent, down from over 6 percent the previous year.

“While graduation rate data involve four-year cohorts which takes time to show upward trends, dropout rates we can measure annually," he said. "Sweet Home High School's dropout rate significantly improved from the previous year. Possibly this is an indication of the early success of our new dropout prevention systems.”

He added that Sweet Home educators do an amazing job of attempting to level the playing field to serve all students.

“But I also know that we will not be satisfied until we help every student fulfill their potential and find a pathway to graduate with the skills necessary to to succeed in life,” he said.

Lebanon High School’s graduation rate climbed to nearly 80 percent in 2017-18, up from about 72 percent the previous year.

Anthony Rimel covers weekend events, education, courts and crime and can be reached at anthony.rimel@lee.net, 541-758-9526, or via Twitter @anthonyrimel.

A real estate broker, a distiller and a security expert went home with the top individual honors at the 2019 Celebrate Corvallis Awards, held …

Luhui Whitebear beat out four other candidates, a slew of questions and deciphered a data graph on the way winning the open seat on the Corval…

Corvallis Culinary Week, which began Sunday and wraps up Saturday, is under new management this year, but is still offering locals a chance to…

West Albany graduates celebrate during commencement ceremonies at Memorial Stadium in June of 2018. A state report released on Thursday shows that the Bulldogs have some of the top graduation rates in the state.