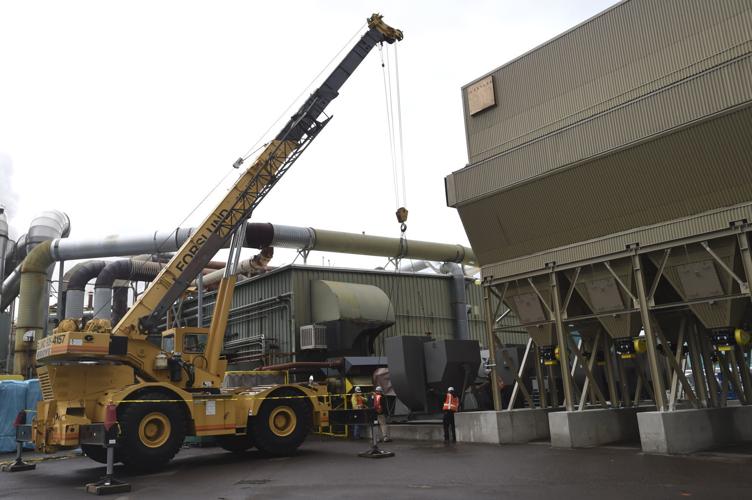 A crew works to place a process fan for new pollution control device at Hollingsworth & Vose in Corvallis on Thursday. The company claims its new system will slash particulate and fluoride emissions. 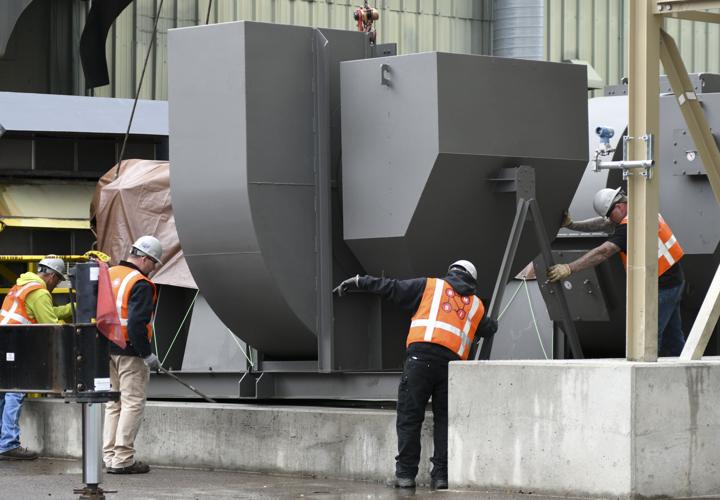 Workers from Bender Mechanical Services set a 7-ton fan for a new emissions control device in place at Glass Plant 1 on the Hollingsworth & Vose site. 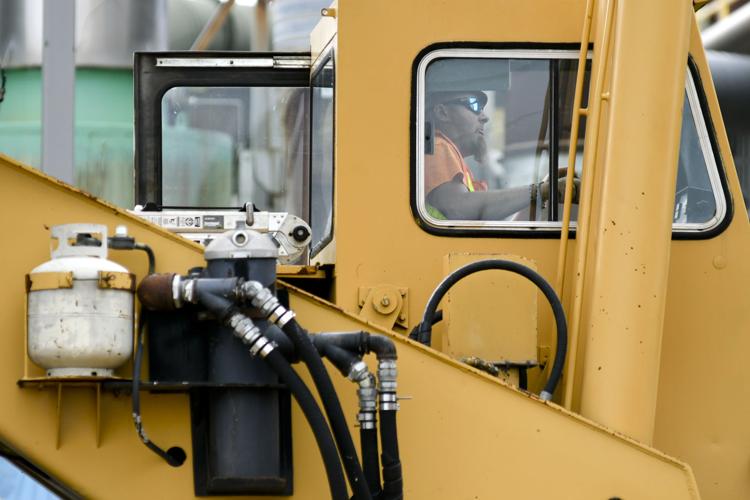 An equipment operator with Forslund Crane Service lowers the fan into place at Hollingsworth & Vose in Corvallis on Thursday.

Hollingsworth & Vose is installing new pollution control equipment the company says will significantly reduce particulates and other emissions at its south Corvallis plant.

On Thursday morning, workers with Forslund Crane Service and Bender Mechanical Services used a crane to lower a 7-ton fan into place for the first of a planned 18 ceramic dry filtration units at the H&V glass fiber plant at 1115 SE Crystal Lake Drive.

After testing the first unit to make sure the custom-designed equipment works as intended, the company plans to install the rest of the filters over the course of the summer, with a goal of completing the work by late July or early August.

Once the entire system is up and running, company officials say, it will eliminate 99 percent of all filterable particulates, significantly cut fluoride emissions, reduce water use by 80-90 percent, virtually eliminate the visible steam plume above the plant and reduce noise levels from the operation.

The new system will not reduce carbon monoxide emissions coming out of the stacks, but H&V officials say they hope it will ease at least some of the concerns expressed by people in the residential district around the factory.

“Our intent was to take the particulate level — which was the main concern of the neighborhood — as low as we possibly could,” said Ken Fausnacht, the company’s vice president for global operations.

Fausnacht declined to say how much money the company is spending on the new equipment, but a building permit application filed with the city of Corvallis puts the value of the project at $2.2 million.

Headquartered in Massachusetts, Hollingsworth & Vose has 14 locations in a half-dozen countries around the world. The Corvallis plant employs about 150 people and produces glass fiber for use in specialty applications such as battery separators and clean room air filters.

In late 2015, state environmental regulators learned that the Corvallis plant had been operating under the wrong class of air pollution permit for almost 20 years and had been putting out much higher levels of fluoride and carbon monoxide than its permit allowed. The Oregon Department of Environmental Quality fined H&V but allowed the plant to continue operating at established production levels while it applied for the appropriate permits.

The revelations alarmed neighbors, who flocked to a series of community meetings to voice their concerns over the DEQ’s regulatory lapses and the possible health effects of breathing tiny glass fibers and other pollutants coming from the plant.

The new ceramic dry filtration devices are among several steps H&V has taken to address those concerns and position itself to meet potentially more stringent emissions limits coming down the pike from the state, which is developing new health-based air pollution standards. The company also has installed several monitors in and around the plant to measure carbon monoxide levels in its emissions and in the ambient air around the plant, as well as a weather station to capture data about wind patterns and other factors that can affect where pollution ends up.

Marilyn Koenitzer, founder of a citizens group called Clean Corvallis Air, said she welcomes any reduction in emissions at the plant but fears some of the smallest and most concerning particulates may still get through. She also worries that the Title V air pollution permit the company is seeking may allow higher levels of carbon monoxide emissions than the plant is currently discharging.

“I don’t care what their production rate is if they contain the effluent,” she said. “If that happens I will be very happy, but I’m waiting to see. I’m reserving total judgment until we see what the testing reveals.”

Fausnacht said he hopes the new equipment will not only slash emissions but also demonstrate the company’s good intentions.

“We want to reduce our emissions dramatically, we want to position ourselves for the long-term viability of this site and we want to show that we’re responding to the concerns of the community — specifically the people in this immediate neighborhood,” he said.

The Benton County Health Department will offer coronavirus vaccination events throughout the county during May.

Froma Harrop: 2 centuries are at war in Ukraine

Russian President Vladimir Putin is clearly out of his mind. Only a deranged and isolated leader stuck a 20th century time warp would launch an unprovoked and barbaric attack against a people he says are the same as his own — and say he is saving them from Nazis. The insanity of it all has freaked out his European neighbors, most notably the once-fiercely neutral Finland and Sweden.

Bird of e-scooter fame is offering free rides on Election Day in Oregon.

Hoyle a no-show in Corvallis congressional debate, that sparked these comments

Nine people are running to replace U.S. Rep. Peter DeFazio. Six made it to the local event.

Oklahoma Legislature passes the most restrictive abortion ban in the nation

Oklahoma Legislature passes the most restrictive abortion ban in the nation

A crew works to place a process fan for new pollution control device at Hollingsworth & Vose in Corvallis on Thursday. The company claims its new system will slash particulate and fluoride emissions.

Workers from Bender Mechanical Services set a 7-ton fan for a new emissions control device in place at Glass Plant 1 on the Hollingsworth & Vose site.

An equipment operator with Forslund Crane Service lowers the fan into place at Hollingsworth & Vose in Corvallis on Thursday.