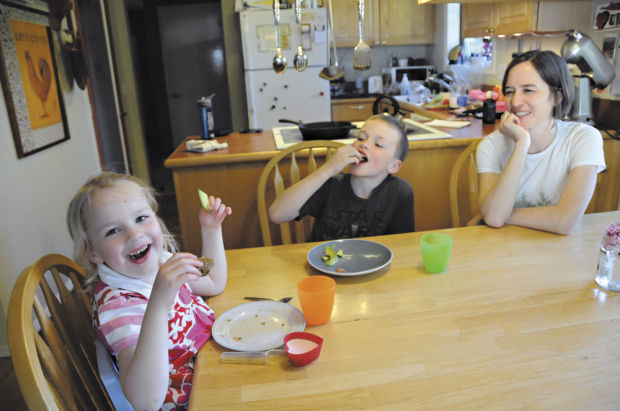 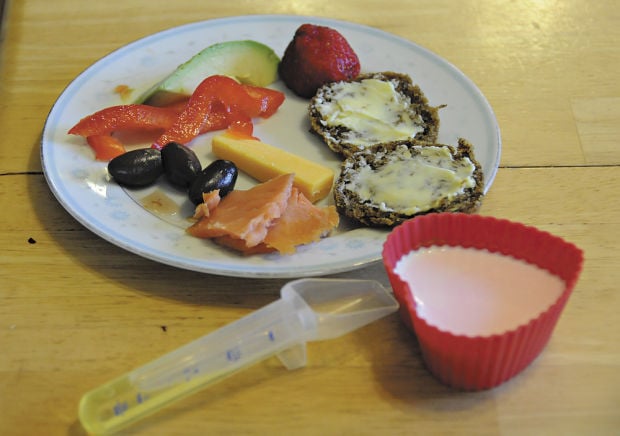 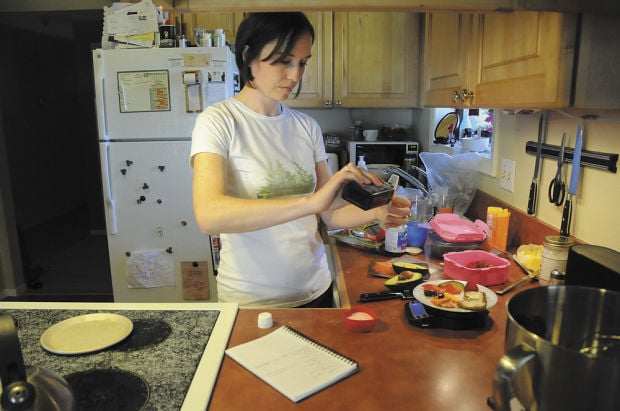 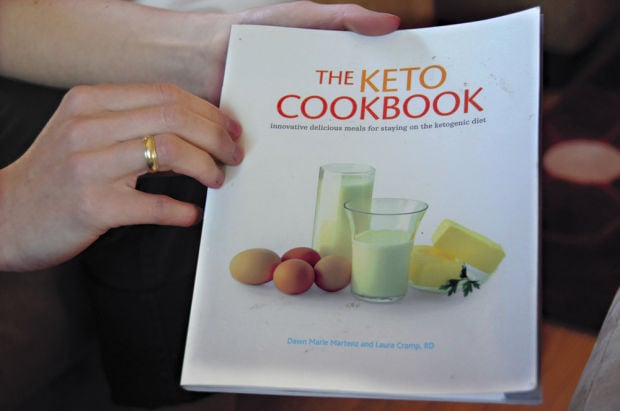 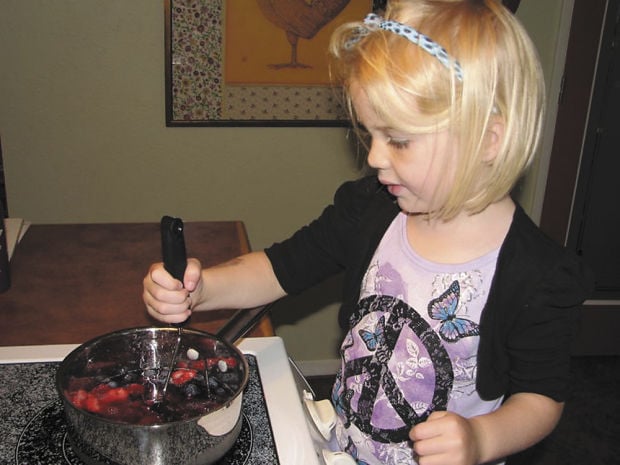 Four-year-old Nora finished her salmon sashimi, but then she wanted another piece.

“She was so excited about the sushi, it was hard to say no,” recalled her dad, Ted Brekken of Corvallis. “We doled her out a certain amount of salmon — it was all calculated — then she said, ‘Can I have more?’”

With Nora’s ultra-strict diet, she rarely gets to eat at restaurants with her family. So that evening, her parents made an equally rare exception and strayed from the plan.

Using a digital jeweler’s scale, which measures to the nearest tenth of a gram, they weighed out another piece of salmon. In order to hit the proper ratio of protein, carbohydrates and fat, however, Nora had to pay for that additional bit of protein by downing 6 tablespoons of cream.

Nora has epilepsy. When medications failed to stave off her daily seizures, her parents — under the guidance of a doctor — turned to a high-fat, low-carbohydrate ketogenic diet. The widely accepted treatment for childhood epilepsy has been documented since the 1920s, but the advent of better drugs and the difficulty of implementing the diet  caused the treatment to wane in popularity — until it re-established itself over the past couple of decades as an alternative for children who have run out of other options.

The seemingly radical treatment, in which more than three-quarters of Nora’s calories are delivered in the form of fat, has taken intense dedication on her parents’ part, but the results were immediate and astonishing.

Wednesday marked one year since Nora has had a seizure.

Nora talks about the things other children her age would: her chickens, building Legos with her dad, baking with her mom, playing Pokemon with her 8-year-old brother, Anders, and jumping on the trampoline in the backyard.

When the conversation turns to food, she is a little less chatty.

She knows how to respond if someone other than her parents offers her food, even if it’s a cookie.

“I can eat my own cookies,” she is trained to say.

It’s been so long since Nora started the diet that she has forgotten the taste of ordinary toast and macaroni and cheese and other former favorites.

Nora generally consumes 1,200 calories split up evenly throughout the day. Every evening, Nora’s parents calculate what she will eat the following day. The fat, carbohydrates, protein and fiber in each food must be broken down to the nearest gram. Every single thing that will go into Nora’s mouth is entered into the formula to ensure that Nora maintains a perfect ratio throughout the day.

Once the day is planned out, her parents carefully weigh and separately package each meal and snack.

Carbs are hidden in everything, including children’s vitamins, so premade, store-bought food is generally out of the question. Christy has become an expert at inventing and adapting recipes. Nora also must take vitamins to make up for the nutrients that she’s missing, fiber to combat constipation from a high-fat diet, and potassium citrate so her blood’s pH stays at a safe level.

Before all of the food calculations and the meal spreadsheet, Christy and Ted’s lives were consumed by more heartbreaking statistics and tracking. They kept a tally on the fridge of the number of seizures Nora had in a day, and Ted produced spreadsheets that counted seizures and tracked the variables that might have affected them.

It was terrifying for Ted and Christy to watch Nora’s first seizure in Novermber 2010. Nora, then 2, fell into her mother’s arms, went limp and began to convulse and turn blue.

They rushed her to the hospital.

Seizures occur when clusters of nerve cells in the brain signal abnormally, and children experience them for different reasons. Her parents had hoped it was an isolated incident, but three weeks later she had another seizure while at day care.

Nora was diagnosed with epilepsy, a disorder that affects more than 300,000 American children under the age of 15.

When doctors could find no obvious cause, Nora was put on an anti-seizure medication. The disorder disappeared for six months but when she was weaned off the medicine, the seizures returned. Then she began experiencing another kind of seizure — sometimes 10 or more a day.

They weren’t as dramatic — her upper body jerked, and she could be thrown off balance — but she recovered immediately as if nothing had happened.

“Our whole life was surrounded by, ‘Nora is having seizures and how do we make them stop,’” Christy recalled.

The new kind of seizure was known to hinder children’s development. The threat that each seizure could be “frying her brain,” Christy said, and turning their smiling, outgoing and gifted little girl into a whole different person was consuming and terrifying.

“One morning I had already counted a dozen seizures,” Christy said. “I said, we can’t do this anymore; this is not helping. We have got to do something different.”

“She is definitely one of my success stories,” Wray said.

The treatment is a last resort for children who are not candidates for surgery and for whom a combination of drugs has not worked. Positive results have been documented for the better part of a century, and in the past five years, two peer-reviewed studies have corroborated them.

“More than half of the kids will have a greater than 50 percent reduction in their seizures, so a lot of kids benefit,” Wray said. “About 15 percent of kids will stop having seizures altogether, which is way better than trying a third medicine or a fourth medicine or a fifth medicine.”

Only two out of the 10 children will have no response at all to the diet.

The effectiveness of the diet is not in question, Wray said, but the ability to implement it is a barrier for some families.

Christy and Ted, however, are more determined and equipped than some parents to follow the diet. Ted, an engineering  professor at Oregon State University, has an eye for detail. Christy, who has a law degree, teaches at OSU and is finishing her Ph.D. in applied economics, said she loved cooking, baking and nutrition before Nora was diagnosed.

“They are parents that have embraced being able to feed her in a different way than a lot of parents are able to,” Wray said.

Because Nora consumes only 10 grams of carbs per day, her body burns fat for fuel instead of carbs, a process called ketosis. Her brain cells are fed on ketone bodies from the 110 grams of fat she eats each day, not on glucose from carbohydrates. For some yet undiscovered reason, ketosis has an anti-seizure effect.

“It does work, but the exact mechanism is unclear,” Wray said.

Wray is currently treating about 50 epileptic children who are on the ketogenic diet or one of the two less intense versions, the modified Adkins diet or the low glycemic index diet.

Nora’s parents saw a reduction in seizures as soon as they began her on a less stringent version of the diet in December 2011. When they clamped down and essentially transitioned into a ketogenic diet three months later, the seizures began to completely dissipate.

But there have been sacrifices: Nora didn’t go berry picking this year with her mom and brother because the temptation to pop berries in her mouth without carefully weighing them out first would have been too difficult to resist.

“It just would have been too cruel,” Christy said.

The family doesn’t eat out anymore. Traveling long distances with Nora also has been suspended.

“We have not been back to (visit family in) North Dakota with Nora since we started this diet,” Christy said. “There is a risk you can’t get the same brand of food there … then you have to recalculate and reweigh everything all while you’re surrounded by well-meaning relatives who want to feed you.”

If they could give her a pill to make the seizures go away, they would, but that isn’t an option. The hours Christy spends developing new recipes and Ted spends calculating meals on the spreadsheet are worth the time, they said, to ensure the health of their little girl’s brain.

“Initially there is a stressful period of adjustment, but if it works, the half hour or 45 minutes I spend in the evening calculating and preparing food for the next day, that is nothing compared to watching her have 20 seizures a day,” Ted said.

Nora will enter kindergarten next year, and she and her parents will face a new set of challenges. But if she can go one more year without a seizure, there is a chance that her brain will develop beyond whatever was causing the seizures.

“We are shooting for two years of seizure freedom and then ending the diet,” Christy said.

In the meantime, Christy has made it her goal to spread the word about its success. Neurologists assume that parents don’t want to go through the trouble, she said, but they should provide the information and allow parents to make the decision.

Nora’s previous neurologist at Doernbecher had warned them how difficult the diet would be.

One year later, Nora certainly doesn’t appear negatively affected by her ketogenic diet. In the living room at the Brekken house last week, she gleefully hurled her body onto the couch yelling, “Bombs away!” She backed up a little farther to build more speed and jumped again and again.

In between runs, Nora offered this self-assessment: “I’m just a normal kid.”

To learn about Nora’s diagnosis, her journey on the diet and ketogenic recipes, visit her family’s blog at blogs.oregonstate.edu/modifiedketogenicdietforepilepsy.

“Thirty-five and a hundred years ago!”