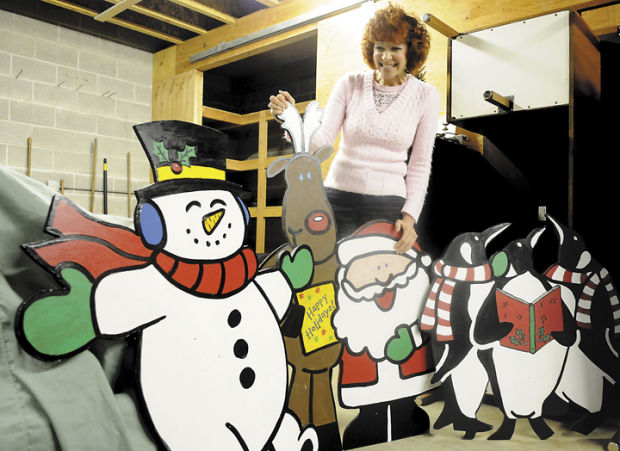 Debbie Luster looks over some recently repainted figures from the Pastega family Christmas light display. Luster, who’s been involved with the annual production since 1994, has been helping with a major refurbishment of the light show. (Jesse Skoubo | Corvallis Gazette-Times) 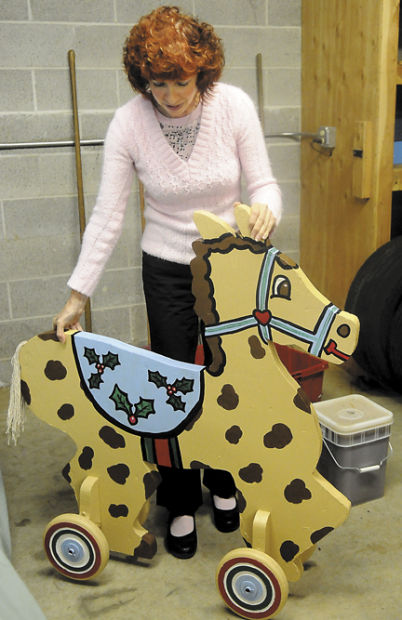 Debbie Luster never had any formal art training, but she grew up drawing.

“It just came naturally to me,” she said.

As a student at West Albany High School, she drew a cartoon strip for the student newspaper featuring a pair of lovable bulldogs. Later in life she satisfied her creative urges by painting holiday scenes in storefront windows.

But perhaps her most rewarding artistic endeavor has been her 19-year association with the Pastega family’s community Christmas light display.

Luster got involved after noticing a glaring omission on a visit to the display in 1994: Even though “The Lion King” was one of that year’s most popular movies, there were no figures from the Disney megahit.

“I’m a huge, huge Disney fan — fanatic would probably be more like it,” Luster confessed.

So she wrote Pastega a letter volunteering to paint some new pieces for the Christmas display, and he leapt at the offer. Her first contribution was a scene from the “The Lion King.”

More than 20 other creations followed, mostly characters from animated Disney classics such as “Pinocchio,” “Beauty and the Beast” and “101 Dalmations.”

One year Pastega asked her to paint a Teenage Mutant Ninja Turtle to satisfy a request from a 7-year-old boy. In the aftermath of the Sept. 11 terrorist attacks he came to her with a more somber commission: “The True Badges of Courage,” a composition honoring the New York firefighters and police officers who died trying to rescue the people trapped in the World Trade Center’s twin towers.

Luster worked closely with Alma Pastega, Mario’s wife, who was the main artist on many of the light show’s figures, and Ole Brensdal, a longtime millwright at the Pepsi plant who created a number of mechanized pieces for the display.

Both are gone now. Brensdal died in 2007, and Alma Pastega passed the following year. After Mario Pastega’s death in 2012, the light show ran for one more Christmas under the Pepsi plant’s new owners, but it just wasn’t the same.

But now it’s getting ready for a new beginning. The Pastega Family Foundation, run by Mario and Alma’s children, took possession of the 130 or so individual pieces that make up the display and invited the community to help spruce them up. Dozens of local residents came forward to adopt some of their favorite scenes, pitching in to replace missing bulbs, repair broken parts and apply fresh coats of paint.

The fully refurbished Pastega Family Christmas Display will open for the season Nov. 29 in its new home at the Benton County Fairgrounds.

“It looks like new,” said Ken Pastega, who worked with his father for many years in the family enterprise. “My folks would be really happy to see it’s still in existence because it easily could have disappeared.”

Luster has been deeply involved in the renovation process, though she admits it’s been tough to let others repaint some of the pieces she created herself.

“It was hard to let them go because these are my babies,” she said. “I’m like a mama hen.”

At the same time, however, she’s pleased with the surge of community support for the project, and she’s sure the light show’s founder would be, too.

“Mario will be smiling down from heaven,” Luster said.

“It’s been wonderful to have the whole community involved. It’s just been a labor of love for everybody.”

The Story Next Door

SECRET OBSESSION: All things Disney; Luster estimates she’s made between 15 and 20 trips to Disneyland and Disney World, and she once spent a week at the Disney Institute, learning illustration techniques from Disney artists and animators

Debbie Luster looks over some recently repainted figures from the Pastega family Christmas light display. Luster, who’s been involved with the annual production since 1994, has been helping with a major refurbishment of the light show. (Jesse Skoubo | Corvallis Gazette-Times)