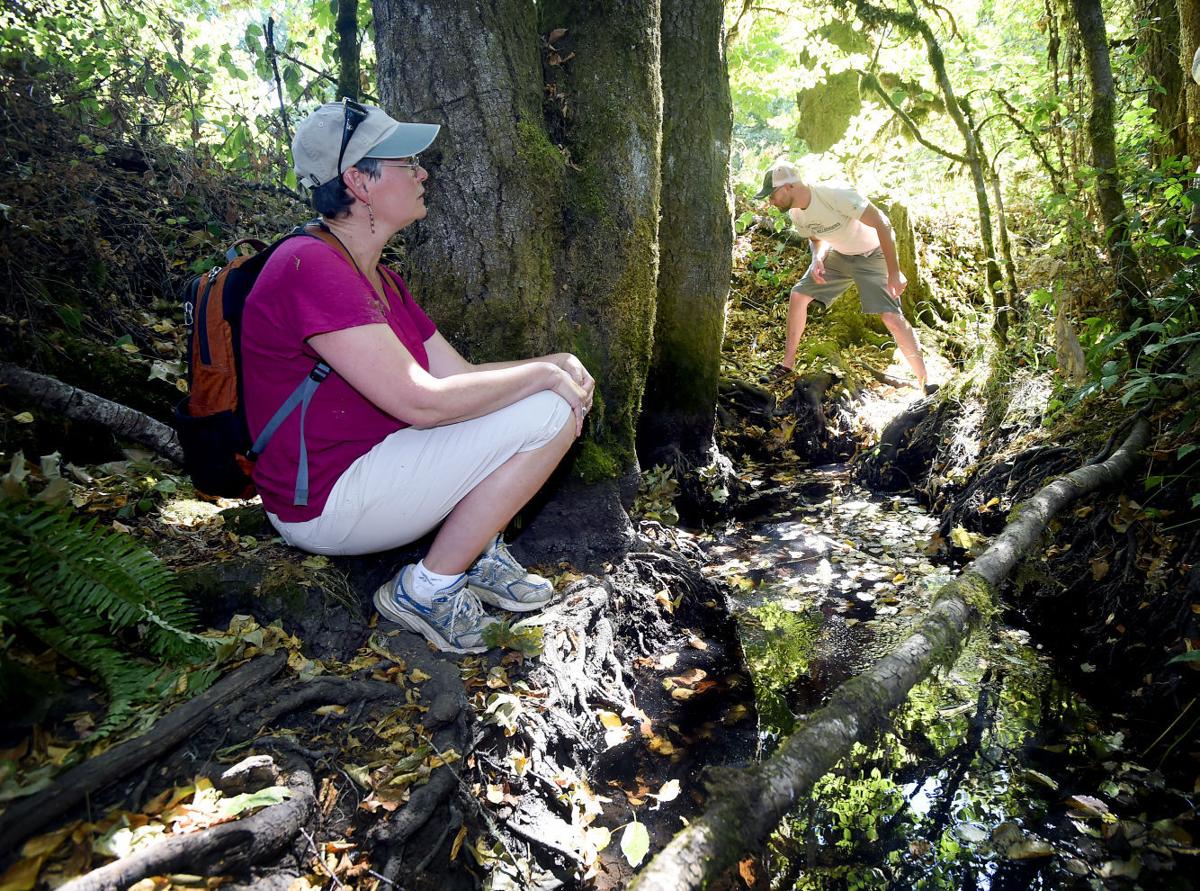 Augerot and Marys River Watershed Council board member Jeremy Monroe explore the newly named Lamprey Creek, a small Oak Creek tributary that runs through northwest Corvallis, in August. The two were part of a local group that won approval for the name from state and federal authorities. 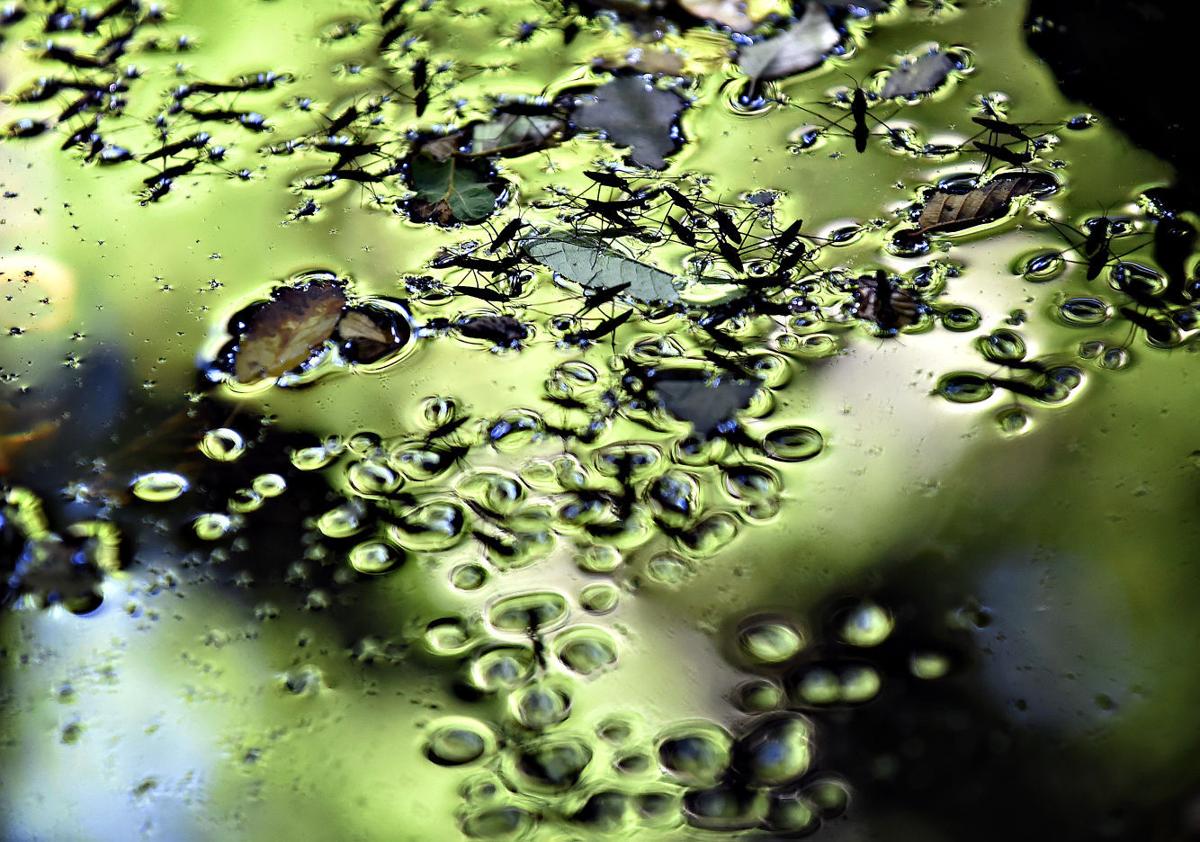 Water skippers cavort on the surface of Lamprey Creek on Tuesday afternoon. 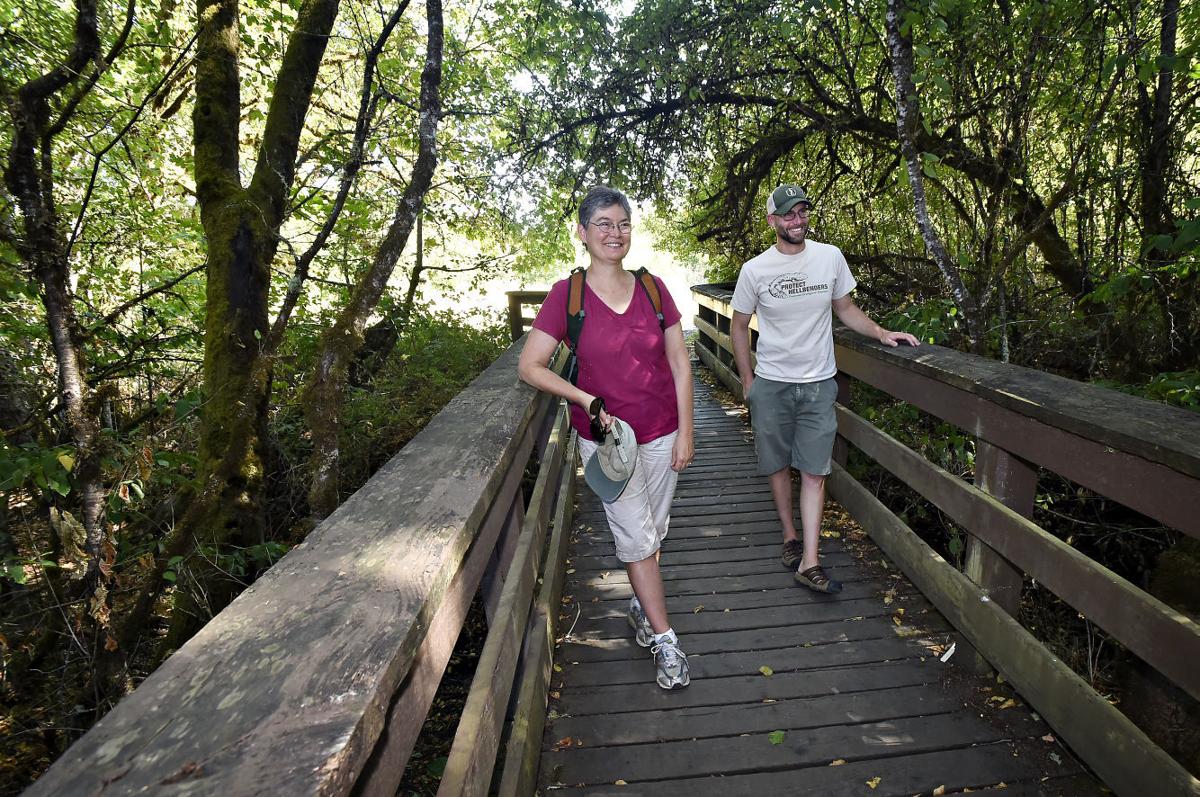 Augerot and Monroe stand on a bridge over Lamprey Creek at Martin Luther King Jr. Park in northwest Corvallis. The stream is the first in the United States to be named for the lamprey, an eel-like fish that was once plentiful in the region but is now in steep decline. 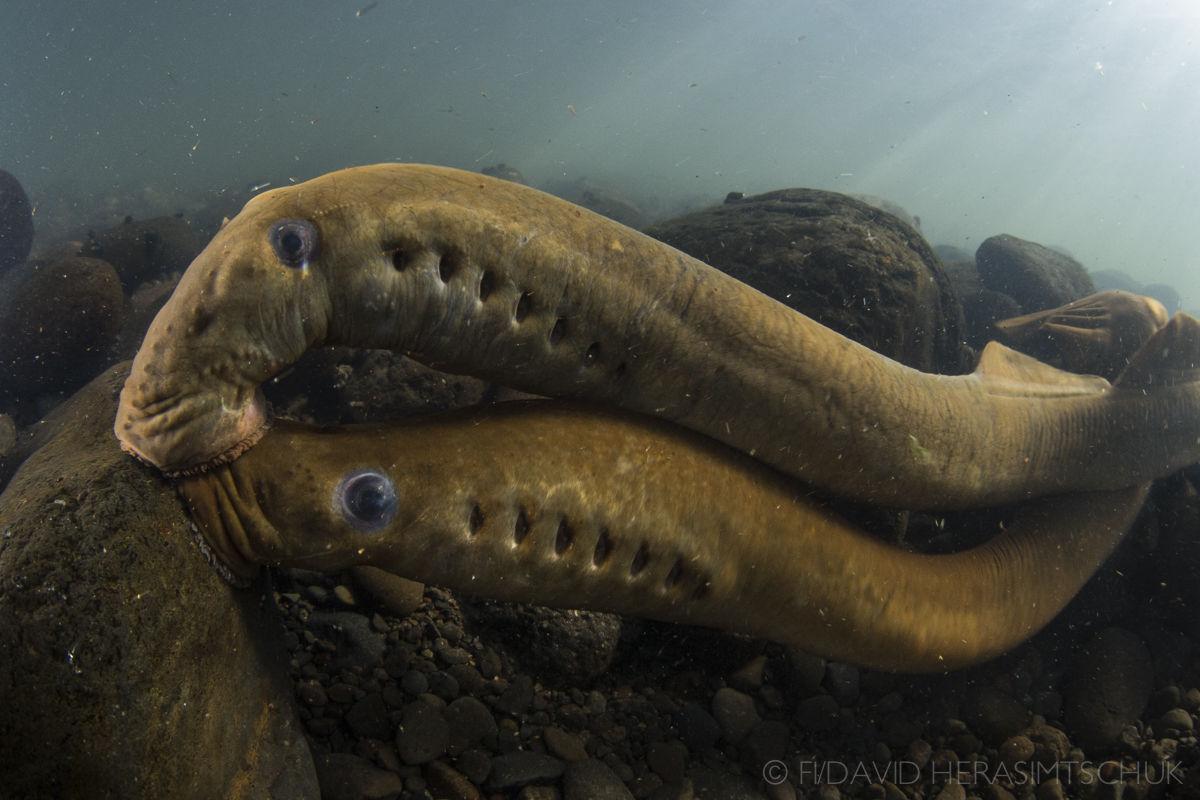 A pair of Pacific lamprey hold themselves steady against a river current by clamping onto a rock with their suckers. Once an important food source for Northwest tribes, the calorie-rich fish are declining sharply throughout the region.

Quick: What’s the name of that little stream that flows through Martin Luther King Jr. Park?

Until recently, it didn’t have one.

Only 3 miles long, this unassuming watercourse drains about 800 acres of forested foothills in the city’s northwest corner and flows only intermittently in the summer. It wanders quietly past the homes of the Skyline West neighborhood, meanders through the park and then ambles south beside Walnut Boulevard before crossing under the road via culvert and emptying into Oak Creek near the northeast corner of Walnut and Harrison Boulevard.

And for the longest time, nobody knew what to call it. But that changed on Aug. 13, when the U.S. Board of Geographic Names gave the stream a formal designation: Lamprey Creek.

The naming was the result of a months-long effort by a handful of area residents who wanted to protect the stream and call attention to the plight of the Pacific lamprey, an eel-like fish once plentiful throughout the Northwest but now in steep decline.

Dave Eckert, who heads the Corvallis Sustainability Coalition’s water action team, started thinking about what to call the stream in late 2013 when he was part of a group working on a model of the Oak Creek watershed. Most of the major tributaries, including Alder, Mulkey and Skunk creeks, were clearly marked on maps of the area. But there was one feeder stream that remained a mystery.

“We noticed there was another creek that didn’t have a name, but it was every bit as long as those other tributaries,” Eckert said.

A check with the Benton County Historical Society confirmed that the stream had never borne a name on any local maps.

The issue took on a greater sense of urgency for Eckert in February 2014, when he read an article in the Gazette-Times about an intoxicated woman who had fallen into the rain-swollen creek and had to be rescued. She called for help on her cellphone, but emergency responders had a hard time locating her because neither they nor the woman knew what to call the stream.

“That article was the final push,” Eckert said.

He hit on the name Lamprey for several reasons. He knew the fish had been an important food source for Northwest tribes, including the Kalapuya people who populated this area before European settlers drove them out. He knew that Oregon State University — which owns much of the property traversed by the creek — was a world leader in the study of lamprey. And he knew that the threatened creatures could still be found in Oak Creek and, most likely, in its tributaries.

Not everyone was enamored of the name, however.

Pacific lamprey, it must be said, don’t measure up to conventional standards of beauty. Growing up to 31 inches long, they have slender, sinuous bodies and sucker-like mouths that make them look like a cross between an eel and a leech. They feed by latching onto other fish and sucking their blood, and they have bulbous blue eyes that give them an otherworldly look.

Among the other name suggestions were Yew (after a tree native to the region), Bashaw (after a local soil type) and Acorn (after, well, a baby oak tree).

But Eckert’s idea gained support from a number of local organizations, including the Marys River Watershed Council, which agreed to sponsor the naming proposal. Signing on as cosponsors were the Corvallis Sustainability Coalition; Freshwaters Illustrated, a Corvallis nonprofit that makes documentaries promoting stream and lake conservation; and the Oregon Cooperative Fish & Wildlife Research Unit, a partnership involving the U.S. Geological Survey, U.S. Fish and Wildlife Service, Wildlife Management Institute, Oregon Department of Fish and Wildlife and Oregon State University.

The 18-page proposal went first to the Oregon Geographic Names Board, where it found favor in part because it met a state requirement that new names for geographic features should be unique. As it turns out, there was no river or stream named Lamprey in Oregon — or anywhere else in the country, for that matter.

Augerot’s still shaking her head over that one.

“Given the importance of lamprey to the native peoples around here, it’s amazing there are no Lamprey Creeks in the Northwest,” she said.

But Freshwaters Illustrated’s Monroe, whose organization recently released a documentary on the Pacific lamprey titled “The Lost Fish,” said the creatures were largely ignored by fish biologists until recently, despite years of complaints by Northwest tribes that the lamprey runs they had relied on for countless generations were dwindling rapidly.

“One of the surprising things about lamprey is how little we know about them,” Monroe said. “It’s kind of a metaphor for the obscurity of lamprey that there are no creeks named for them.”

The Oregon Geographic Names Board approved the application in June and passed it on to the U.S. Board of Geographic Names, which bestowed its blessing last month. Now that the Lamprey Creek handle is official, the organizations that proposed the name are planning a sort of christening celebration in October at Martin Luther King Jr. Park, where local residents can get a look at the pretty little stream most probably never gave much thought to before.

Besides raising awareness of threatened lamprey runs, the new name’s backers are also hoping to drum up support for protecting the creek itself. According to Augerot, Lamprey Creek is under pressure from a variety of factors, including pesticide runoff from lawns and farm fields, sediment and animal waste from pastures, and pollution carried by rain washing over urban roadways.

Now that we know what to call it, she’s hoping it will be harder for local residents to take Lamprey Creek for granted.

“An unnamed creek is an unloved creek,” Augerot said. “It quickly becomes a ditch.”

An investigation into the deaths of a Philomath couple last month provides confirmation that the incident was a murder-suicide, according to a…

Augerot and Marys River Watershed Council board member Jeremy Monroe explore the newly named Lamprey Creek, a small Oak Creek tributary that runs through northwest Corvallis, in August. The two were part of a local group that won approval for the name from state and federal authorities.

Water skippers cavort on the surface of Lamprey Creek on Tuesday afternoon.

Augerot and Monroe stand on a bridge over Lamprey Creek at Martin Luther King Jr. Park in northwest Corvallis. The stream is the first in the United States to be named for the lamprey, an eel-like fish that was once plentiful in the region but is now in steep decline.

A pair of Pacific lamprey hold themselves steady against a river current by clamping onto a rock with their suckers. Once an important food source for Northwest tribes, the calorie-rich fish are declining sharply throughout the region.