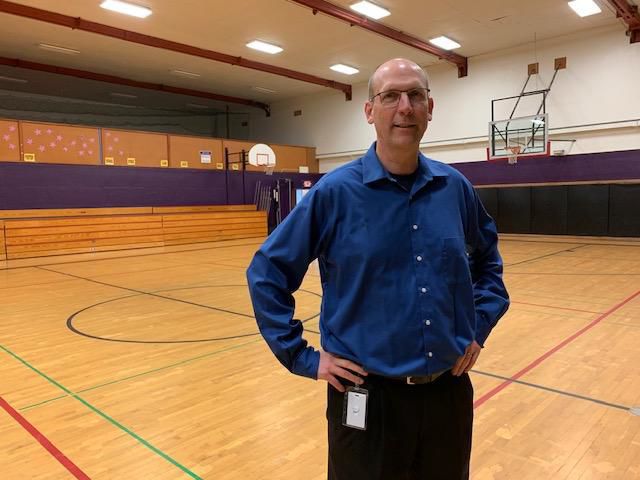 Scott Jantzi had a heart attack during a staff-versus-students basketball game at Jefferson Middle School. Residents in attendance gave him CPR almost immediately and also used an automated external defibrillator to revive him. 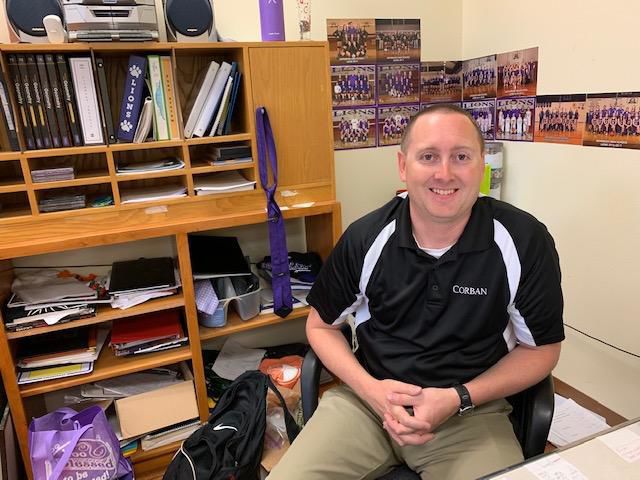 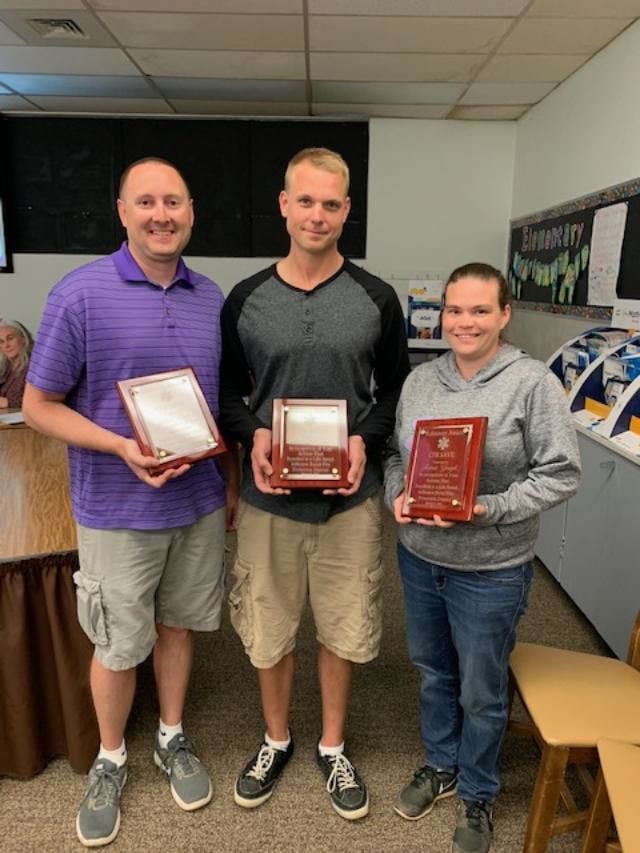 For saving Jantzi, Nick Plotts, Aaron Kunkel and Jamie Gough received Heart Saver Awards from the Jefferson Fire District at the Jefferson School Board meeting on May 13. 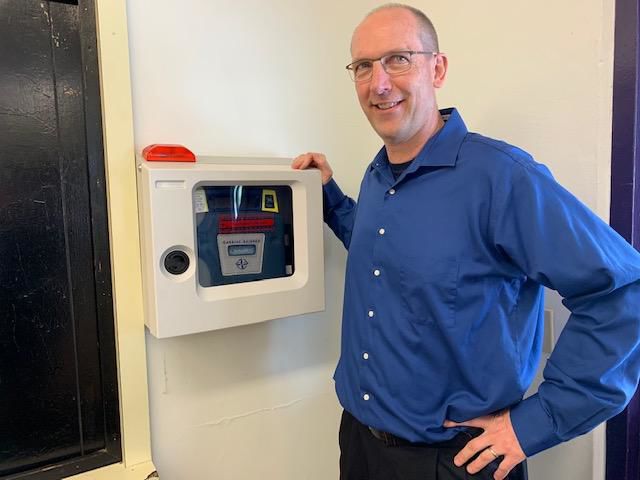 Jefferson Middle School Principal Scott Jantzi shows the AED, just outside of the school gymnasium, that helped save his life when he had a heart attack during a staff-versus-students basketball game.

JEFFERSON – Scott Jantzi, Jefferson Middle School’s principal, said he was lucky that he had a heart attack at work instead of anywhere else on March 21.

“Had I not been at a place with an AED (automated external defibrillator) and people trained in CPR, my family would have gone to my funeral on spring break. They saved my life,” Jantzi said.

The heart attack came during an after-school staff-versus-students basketball game, and a group of residents started chest compressions and rescue breathing almost immediately. An AED, mounted in a hallway just outside the gym, was retrieved and Jantzi was shocked once. Jefferson Fire District medics took over as Jantzi opened his eyes and started breathing on his own.

“Everybody kind of sprang into action,” Jantzi said.

On May 13 during the Jefferson School Board meeting, the Jefferson Fire District gave Heart Saver Awards to the residents who helped save Jantzi.

They included: Jamie Gough, a nurse in attendance; Nick Plotts, a Jefferson High School teacher and varsity girls basketball coach who was asked to play in the game; Lincoln Case, a Jefferson Middle School parent who was refereeing the contest; and Aaron Kunkel, the parent of an eighth-grader.

Gough started CPR, and was assisted by Kunkel and Plotts, who performed rescue breathing. Case ran to get the AED and helped hook it up to Jantzi.

Tammy Robbins, Jefferson Fire District spokeswoman, said that it’s rare for the district to respond to emergencies in which an AED is used by the public. “We don’t see this that often. To see that save is incredible,” she said.

She added that a quick response plays a huge part in giving heart attack victims a chance to survive.

“If you see somebody going down, it’s important to start doing compressions right away,” she said.

Jantzi said that thanks to his rescuer’s swift actions, he has no significant long-term brain or heart damage, which are common after cardiac arrest.

In plenty of instances, no medical assistance is given to cardiac arrest victims, Robbins said.

Sometimes, fear will keep people from doing something to help, or they’ll freeze in an emergency, especially if it’s a family member, Robbins said.

“The biggest thing is if you can go through CPR training, first aid training, AED training,” she added.

Robbins said the quartet of residents who provided medical assistance to Jantzi didn’t feel like they deserved awards. But she called them heroes nevertheless.

“If I wasn’t there, someone else would have done the exact same thing,” said Plotts, who graduated from Santiam High School in 1997 before playing basketball for Western Baptist University, now Corban University.

And he has a point.

Jantzi said that the Jefferson School District, like other school districts in the mid-valley, is diligent in making sure all employees are trained in first aid and CPR.

Plotts said he didn’t really think about doing CPR. He just reacted. “That’s why you go through the training every year,” Plotts said.

When Jantzi stopped running and fell, Plotts was dribbling past half-court.

“He just hit a three-pointer the previous play,” Plotts said.

An adolescent — Plotts couldn’t recall who — was the first to help out, and cradled Jantzi’s head.

“It sounded like he was snoring. He had a pulse, and then 30 seconds later, nothing,” Plotts said.

Plotts had never performed CPR before, though he has helped out with students’ medical issues.

In the moment, he was scared for the students who witnessed the incident.

Jantzi is in his first year leading Jefferson Middle School, after working for Greater Albany Public Schools and the Salem-Keizer School District.

The 56-year-old grew up outside Shedd and suited up at power forward for Lebanon Union High School.

“Kyler Whitaker was the big star on the team. He played at Navy with David Robinson,” Jantzi said.

After graduating from Lebanon in 1981, Jantzi played hoops for Heston College, a junior college in Kansas, and Goshen College in Indiana.

Jantzi still looks trim. Because of his family’s history of heart disease, he’s tried to watch his weight and exercise regularly.

His brother, Curtis Jantzi, died at age 52 from heart failure. While his wife was a nurse, there was no AED near their home, and she couldn’t save him with CPR alone. Jantzi’s grandfather and great-grandfather also died from cardiac arrest.

While Jantzi is fit, he isn’t basketball fit anymore. And he was pushing himself chasing around the middle schoolers.

Janzti has no recollection of collapsing in front of the eighth-graders’ bench, and doesn’t remember feeling any symptoms.

But he’s heard the stories, and he knows it was traumatic for students and other community members in attendance.

After he keeled over, the gym was cleared, and students and parents waited in a breezeway, and there was plenty of crying.

“They say when they wheeled me out, my eyes were open and I was talking, so that was a big relief to people,” Jantzi said.

Robbins said that Jantzi wasn’t worried about himself. “He started asking how the kids were. How amazing is that?” she said.

The Monday after spring break, Jantzi came back to the school, to thank staff members and see students for an hour or two.

“I got a lot of hugs. I think it was pretty scary for them,” he said.

He then went on what he described as a “thank you tour,” visiting the Jefferson Fire District and Jefferson High School.

Last week was Jantzi’s first full-time week back at work.

Oddly enough, Janzti is having more health issues with post-concussion symptoms than anything else right now. When he collapsed, he fell backward and hit his head on the gym floor.

Because of Jantzi’s experience, the district is considering holding a CPR training for students. Jantzi is sure that there would be some attentive learners.

The Jefferson Fire District has a five-year levy on the May 21 special election ballot that would raise a total of $1.38 million.

Descendants of Jacob Conser support a plan to turn the settler’s home, the city of Jefferson’s most historic building, into a local museum.

JEFFERSON – The Conser House has had a prominent place in this small town ever since it was built by pioneer and businessman Jacob Conser, who…

Voters appeared to be on track to pass a five-year levy that will raise $1.38 million for the Jefferson Fire District, according to preliminar…

The city of Jefferson will hold a ground-breaking ceremony for its new water treatment plant at its public works facility, 700 N. Second St., …

Scott Jantzi had a heart attack during a staff-versus-students basketball game at Jefferson Middle School. Residents in attendance gave him CPR almost immediately and also used an automated external defibrillator to revive him.

For saving Jantzi, Nick Plotts, Aaron Kunkel and Jamie Gough received Heart Saver Awards from the Jefferson Fire District at the Jefferson School Board meeting on May 13.

Jefferson Middle School Principal Scott Jantzi shows the AED, just outside of the school gymnasium, that helped save his life when he had a heart attack during a staff-versus-students basketball game.