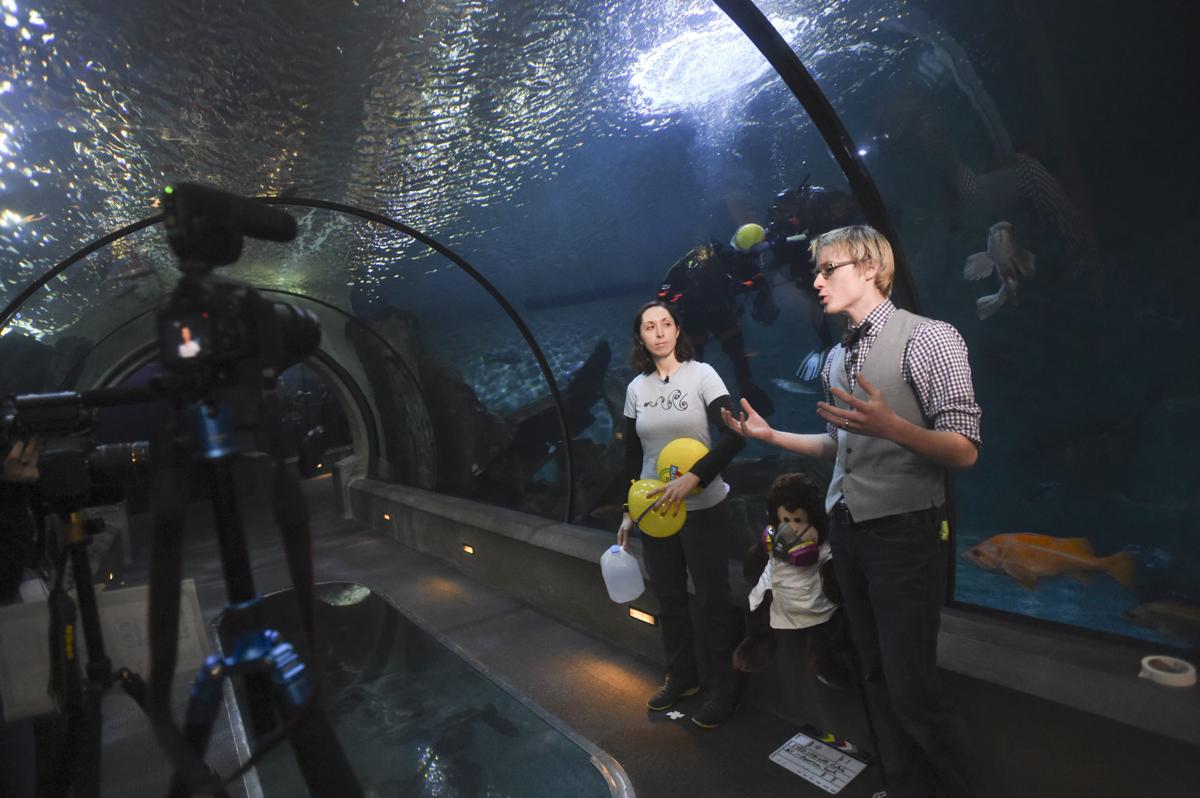 "Lib Lab" host Aaron J. Fillo, right, and Nicole Sharp, of FY Fluid Dynamics, work on a shot as scuba divers Kevin Buch and Will Fennie get into place last December in the Halibut Flats exhibit at the Oregon Coast Aquarium in Newport. The video from the shoot was released Friday onto YouTube. 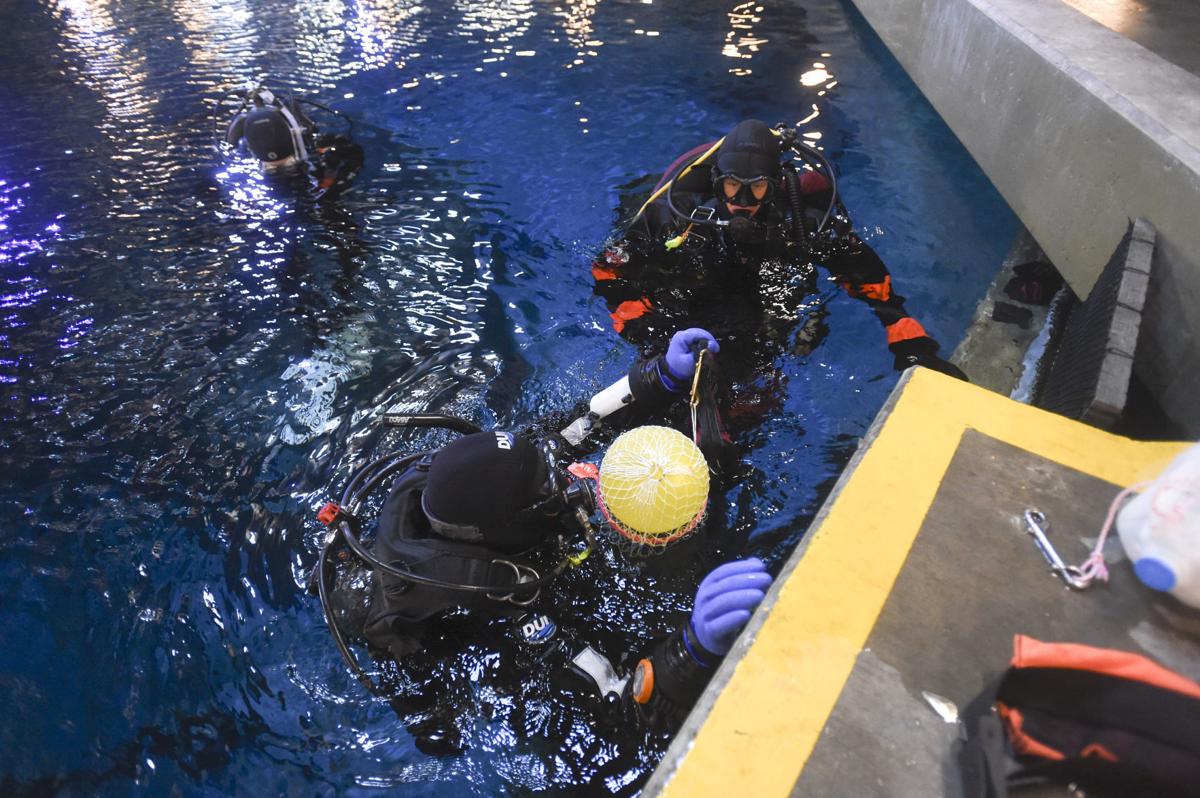 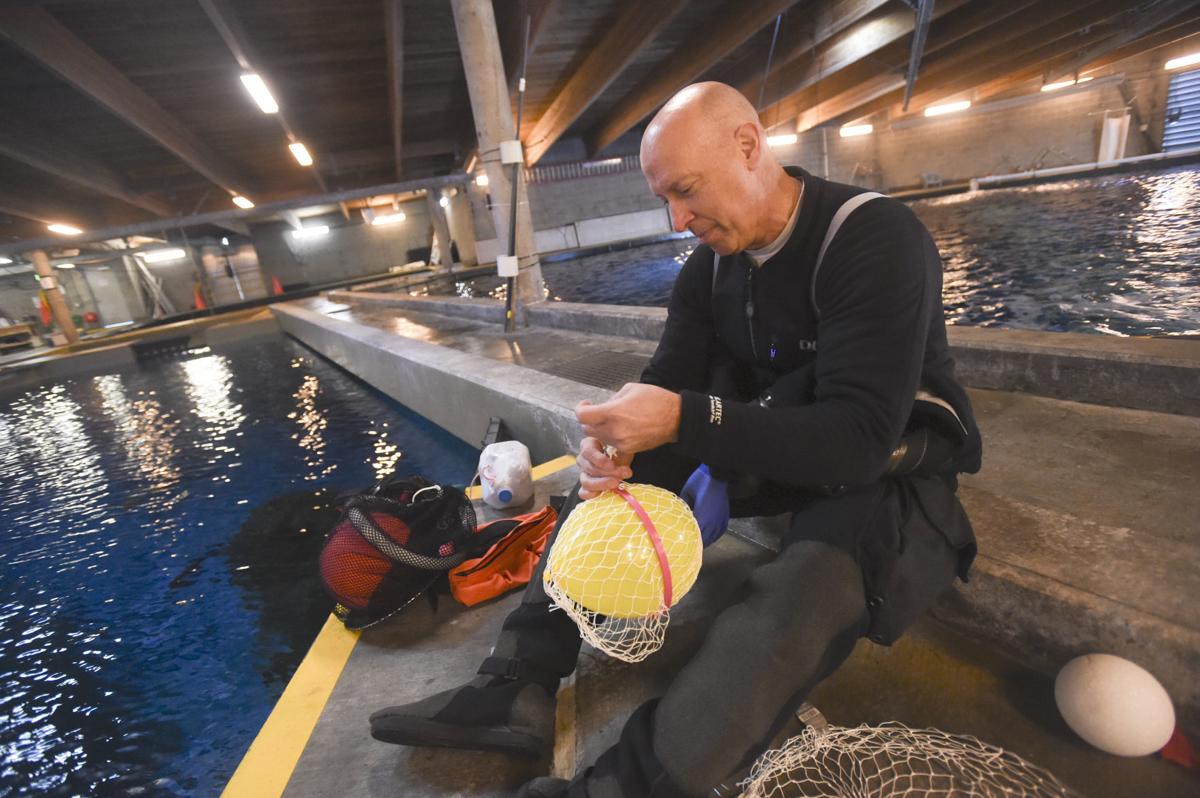 Buch, diving safety officer at Oregon State University, configures the props to be used underwater during a filming of "Lib Lab" at the Oregon Coast Aquarium in Newport this week.

The shoot at the Oregon Coast Aquarium took Aaron J. Fillo months to plan: He had to get approval from the aquarium, line up certified volunteer divers, find people to operate cameras during the shoot and coordinate with a partner from Colorado on scripts.

At the end of all that, Fillo, creator, host and showrunner for "Lib Lab," an educational video series produced in partnership with the Corvallis-Benton County Public Library, had just a few hours to shoot a demonstration of how pressure affects everyday objects in one of the aquarium’s large tanks.

But even in the midst of the chaos of coordinating a crew of around 10 people during the shoot Tuesday, Fillo stopped repeatedly during his experiment to explain the science behind the demonstration to kids passing by where he was filming.

After these explanations, the passersby often paused to watch the demonstration, which involved divers slowly bringing a balloon, a dodgeball and an air-filled milk jug to the bottom of the tank to demonstrate how the water pressure deflated each.

“He’s just like Bill Nye the Science Guy,” commented one mom as her family passed the demonstration.

Fillo, a Ph.D. candidate in engineering at Oregon State University, said the shoot was just one in a week of filming that will result in a six-part video series on the fundamentals of pressure. Half of the videos will appear on the library’s YouTube channel, and half will appear on the FY Fluid Dynamics YouTube Channel. Nicole Sharp, who runs FY Fluid Dynamics, a blog with 250,000 subscribers aimed at making fluid dynamics accessible to more people, came out from Denver to work with Fillo.

Sharp said she had seen Fillo’s "Lib Lab" videos and met Fillo at a conference. After communicating following the conference, they decided to work together. Fillo and Sharp’s plan is to create a cohesive mini-documentary on pressure, with all the episodes co-branded and forming complementary pieces of the whole.

The plan, Fillo said, is to release the first videos in the series in January and release two a month after that. Fillo said he hoped the collaborations would demonstrate how educational videos can be produced collaboratively for other YouTube creators.

Wednesday, for the project, Sharp and Fillo also used pressure to blow up a carboy, a large bottle enclosed for protection, with help from the Corvallis Fire Department.

“From an education-theory perspective one of the things that is really valuable is teaching to an extreme," Fillo said. "The reason for that is we learn best if we can break down our misconceptions and kind of the barrier we have to learning.

With the aquarium demonstration, he said, the idea was to pick objects that would change in size under pressure from water.

“A value of doing that in an aquarium is you don’t typically see divers in an aquarium, especially divers with a balloon or a dodgeball," he said. "Taking something normal and putting it into an unusual environment allows you to approach the problem from a slightly different perspective and hopefully kind of break down that wall and encourage learning and engagement. Plus, we’re in an aquarium. This is really cool.”

"Lib Lab" got started earlier this year with a $15,000 grant from the Friends of the Corvallis-Benton County Public Library, which funded the filming of the project’s first three episodes. Episodes include a lesson on a scientific concept, demonstrations of the concept and information about how kids can do experiments on their own to explore the concepts. Kits with materials for these experiments are available at Benton County library branches.

The pressure lessons will be accompanied by a Cartesian diver lesson, in which kids can make a water-filed plastic bottle with a nearly neutrally buoyant floating object in it, which sinks when the bottle is squeezed, increasing the pressure on the object.

Andrew Cherbas, a deputy director with the library, said the Friends of the Library group still is providing funding for "Lib Lab," but less than it did initially. One result of the reduced funding is that Fillo doesn’t have a professional film crew anymore.

On YouTube, "Lib Lab" has videos that have generated thousands of views. Fillo said he’s occasionally been recognized from the show, and has heard from parents that kids really like his videos.

“That makes me really happy," he said. "Especially knowing that parents are watching the show, doing the demonstrations with their kids and encouraging learning. Knowing we are having an impact is really positive.”

"Lib Lab" host Aaron J. Fillo, right, and Nicole Sharp, of FY Fluid Dynamics, work on a shot as scuba divers Kevin Buch and Will Fennie get into place last December in the Halibut Flats exhibit at the Oregon Coast Aquarium in Newport. The video from the shoot was released Friday onto YouTube.

Buch, diving safety officer at Oregon State University, configures the props to be used underwater during a filming of "Lib Lab" at the Oregon Coast Aquarium in Newport this week.