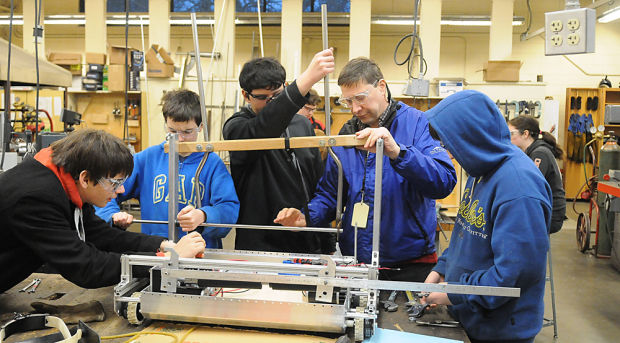 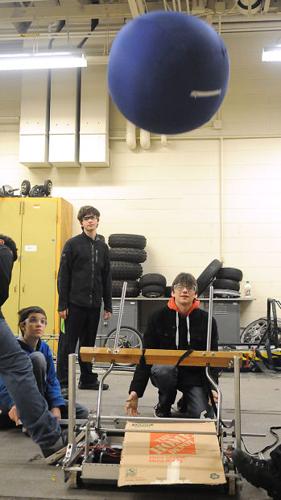 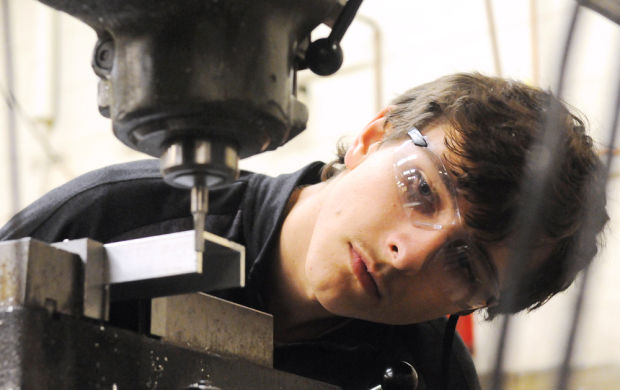 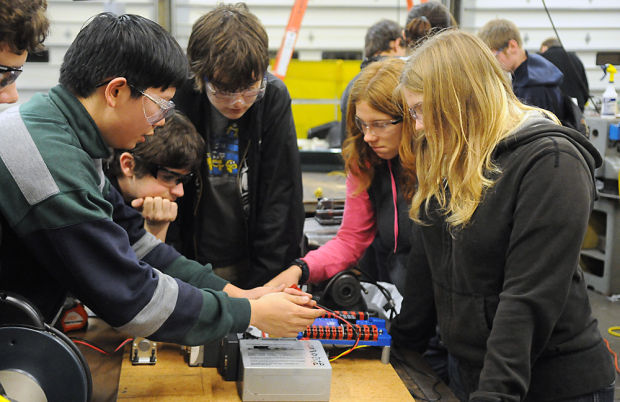 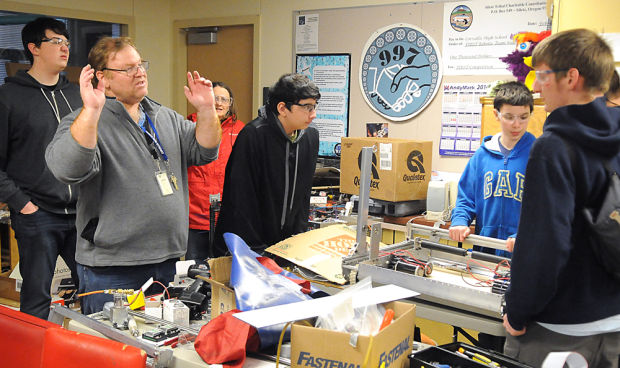 The Corvallis High School Robotics electronics subsystems team had a problem Tuesday afternoon: It couldn’t attach components to the robot because a mechanical systems team was busy working on the robot’s catapult.

It’s a common problem during the “build season” for the FIRST Robotics Competition, which began Jan. 4 and ends Feb. 18: Student teams often work on different subsystems, and all of them need access to the robot’s chassis, but they can’t all work at the same time. Plus, the short build season increases the pressure.

This year, the challenge for students is to design a robot for a game called “Aerial Assist,” which has two teams of three robots that play a game where they get points for putting a ball through goals of two different heights. More points are awarded for the higher goal.

Floyd Moore, a team mentor and engineer at Hewlett-Packard, asked the students who were working Tuesday on the robot’s electronics if they could possibly mount the components to a board, which then could be bolted onto the space where the components were supposed to be installed.

The students discussed the idea. Eventually, Olivia Helback, a freshman in her first year with the team, said they would try to make the concept work.

“We’ll have to take some measurements,” she said.

An hour later, the students had found and cut a board to the right dimensions and were plotting the location of the components on the board. Helback said the idea was a good one because it made the electronics board modular, so it could be removed easily for repairs.

She added that the electronics team often is at the mercy of other teams because they have to place components where they will fit to allow the mechanical parts to move and function properly.

“You have to be incredibly creative and flexible to be in electronics,” she said.

About 35 students are on the build team, said Daniel Zhu, the co-president of the Corvallis High School team. Figuring out how they all can do their work on the robot is one of the major challenges of the competition. “The entire robot is essentially a packing game,” he said.

During the build season, he works on the robot for about 25 hours a week.

“It’s difficult, but it’s worth it. You meet a bunch of people who are interested in the same things you are.”

Zhu also said he enjoys the mental challenge of robotics.

“It pushes me. That makes me a better person.”

Students at Crescent Valley, Philomath and Santiam Christian high schools also are in the middle of build season, which concludes at midnight Feb. 18.

The Benton County schools, along with teams from Albany, Lebanon and Newport will scrimmage at Crescent Valley on Feb. 15, from 8 a.m. to 4 p.m., a free public event.

Zhu said that the goal is for the Corvallis High robot to be finished for the scrimmage.

“We are hoping to use it not just to debug, but also as driver practice,” he said.

According to Zhu, a Corvallis High junior who wants to study medicine, team members will then use the last few days of build season to finish the robot, and make last-minute modifications before the robot is sealed up until their first competition.

The model for the robotics competition in the Northwest has changed from last year because of the increasing numbers of high schools participating. Instead of a single regional competition, the teams will compete at two events in the Northwest region.

The district events are held throughout Oregon and Washington, including a competition at Gill Coliseum on April 4 and 5, for which nearly 30 teams are registered.

Moore, who has mentored the team for the past five years, said the robotics competition gives students real-world project experience that universities and employers consider valuable.

“It’s crazy and intense. They learn about doing things on a schedule,” he said, adding that they also learn about keeping costs under budget. That’s important because they also do their own fundraising.

Participation isn’t cheap. It takes $5,000 just to register for the competition and to get the basic parts kit from the organizers. Moore said the team needs another $4,000 for additional components.

In fact, some robotics students are not involved in the build at all, and work instead on fundraising, management and marketing for the team.

Moore said robotics is fun for the participants, and he compared the regional competition events to a mix between an NHL game and a rock concert: “The energy is off the charts.”

Froma Harrop: The credit for EVs is unusually well crafted

It isn't true that the new subsidies for buying electric vehicles will only benefit the rich. Even if it were, I wouldn't care.

Froma Harrop: When a story has little to do with the news

Interesting headline in The New York Times: "In an Unequal Economy, the Poor Face Inflation Now and Job Loss Later."

It is with a very heavy heart we announce the unexpected passing of Dakota Johnson of Corvallis, Oregon. He left this earth too early, at the young age of 26. Dakota was born in Missoula, Montana on Oct. 15, 1995. He was known for his quirkiness, and ability to put a smile on people's faces with his humor and sarcastic remarks. Although his life was too short, the impression he left on family and friends will never be forgotten. Dakota had extensive knowledge with technology but was very passionate about computers. In his free time, he often enjoyed fixing and rebuilding them or playing video games such as League of Legends. Dakota very much enjoyed skiing and was part of the Corvallis High School ski team.

In the end, Albany says yes to therapeutic mushrooms