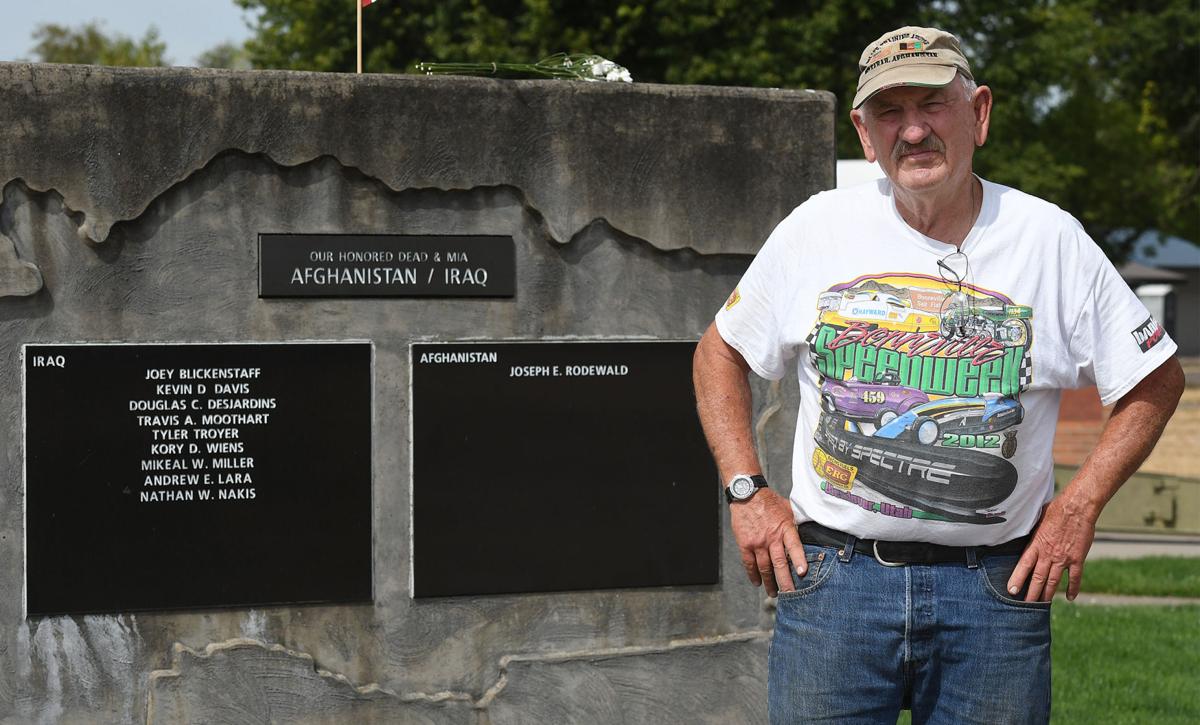 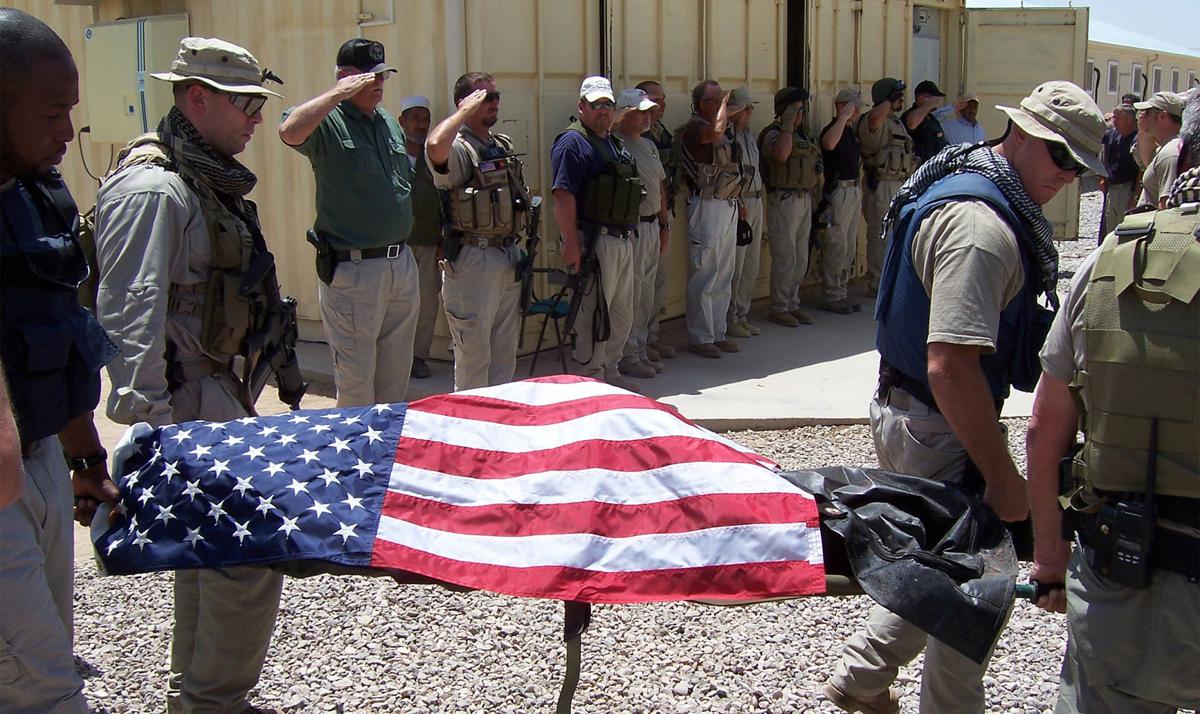 The body of contractor Ron Zimmerman is transported to the base after a suicide car bomb struck the convoy.

Workers prepare to remove the truck in which a contractor was killed during a suicide car bombing. 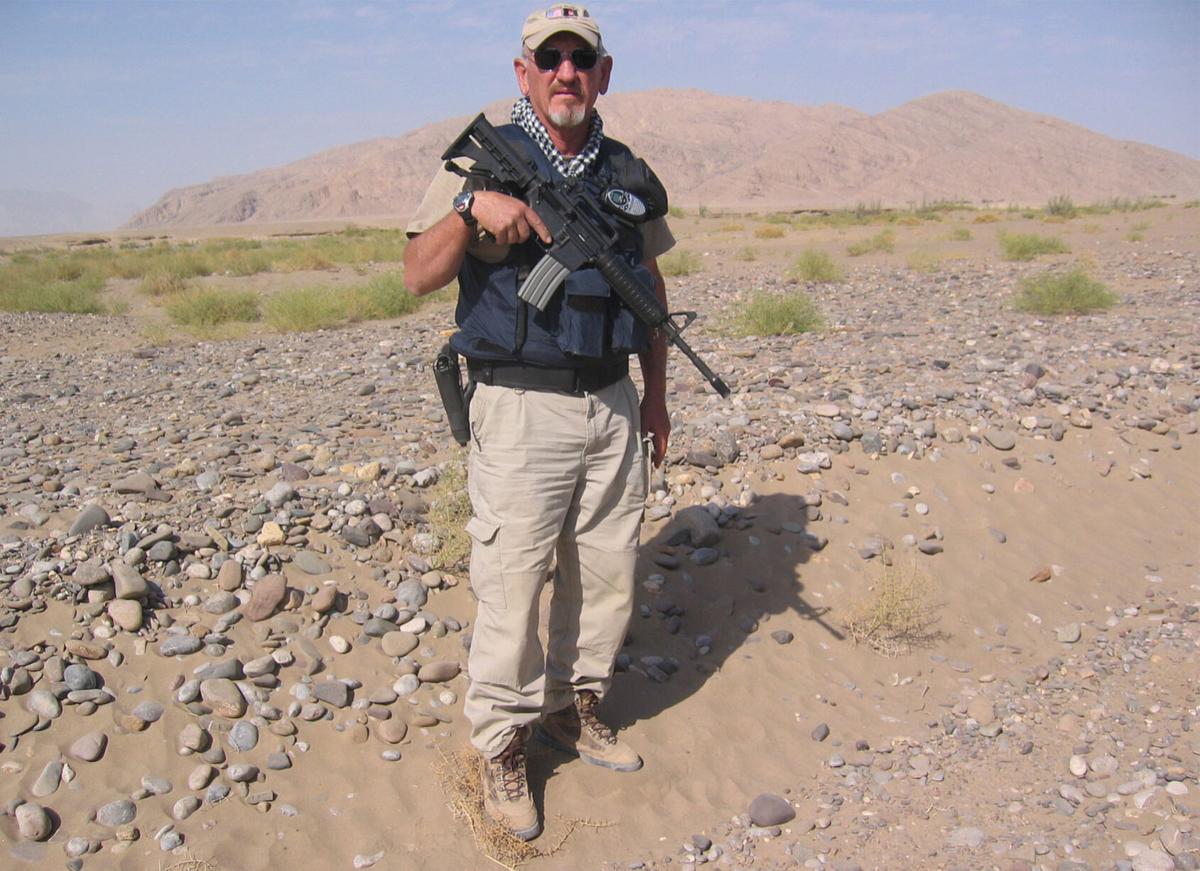 Randy Martinak stands along the Hare Rud, which is a river between Farah and Harat 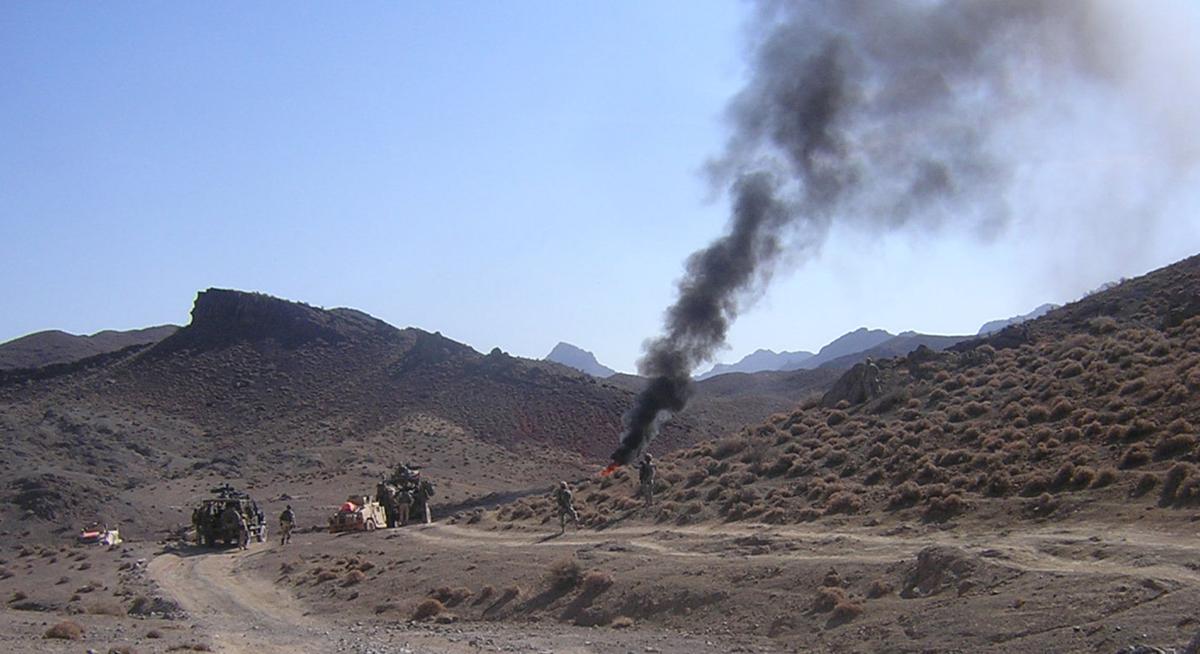 Both U.S. veterans and Afghans describe a sense of betrayal over the United States’ swift evacuation after decades of conflict and purported nation-building. Those who were deployed describe a slapdash and doomed effort to try and build a nation that could stand up against the Taliban and other insurgency groups. After the nation collapsed in about a week following the withdrawal of American forces, the outcome has left many who sacrificed scratching their heads.

“They want us and our kids to put our lives on the line and defend this country and the principles of this country and they pull stunts like this,” said retired Navy Chief Chuck Zeitler of the withdrawal. “I’m so fed up because this is the same thing we did in Vietnam.”

Many are making the comparison to America’s next-longest war. There are certainly similarities. Both were political missions as well as military ones, with the aim of installing a government that was friendly to the United States and its allies, and which could stand up against threats from insurgency groups and the influence of other world powers.

Both the wars in Afghanistan and in Vietnam were protracted conflicts against guerrilla groups who were deeply entrenched in the country and in the communities that U.S. forces were deployed in. The fall of Kabul, Afghanistan’s capital, is similar to the fall of Saigon, the capital of South Vietnam, in that the taking of both cities by opposing forces signaled a defeat of the United States’ forces in the region.

Started after the attacks on Sept. 11, 2001, during the George W. Bush presidency, the U.S. presence in Afghanistan was tied to a commitment to rooting out terrorist organizations and bringing them to justice.

The effort to pull out of the country was started by President Trump, particularly after a February 2020 agreement with the Taliban that agreed to a halting of military actions against the Taliban and a full withdrawal of U.S troops and personnel. That agreement originally stated that U.S. forces would leave the country by May of this year, but the deadline was extended to August under the Biden administration.

It didn’t take long for the Taliban to reassert its dominance over the region and over the local populace. Every region where American troops were pulled from fell to the Taliban in a matter of days.

Now, the remaining U.S. personnel have been leaving the last foothold in the region, at the Hamid Karzai International Airport in Kabul. The mad dash to the airport by thousands of Afghans hoping to flee to the safety of foreign lands over the past few weeks has led to harrowing images of desperation.

For veterans like Zeitler, who was deployed on a naval supply ship off the coast early in the conflict, the stinging nature of the U.S. withdrawal — and how many deaths and abandoned equipment has resulted from it — makes the whole conflict feel fruitless.

“I feel betrayed by my country because we went and people gave their lives for that and we hurried up and pulled out. It pretty much gave up everything that lives were given for,” Zeitler said, adding that he is not alone in his frustration. “If you were in the military, even on the stateside of this, a lot of veterans I know are very upset because this happened.”

Randy Martinak, president of the Linn County Veterans Memorial Association and a retired Navy officer himself, was stationed in Afghanistan for years as a private contractor for Dynacorp, a private security firm hired by the U.S. Department of State. Retired from the Oregon State Police and Oregon Department of Justice, he was there in 2006 training local police forces, especially border police, so they could be self-sustaining and have the experience and armaments to stand up against insurgent threats.

Martinak says the quick fall of the recognized Afghan government highlights how doomed these efforts were from the start.

He described a disjointed operation that was bogged down by bureaucracy. U.S. forces, partnered with multiple countries and coordinated through multiple private and public sector agencies, were often lost in the shuffle, he said. The whole situation was more of a quagmire than most people back home realized.

“I was part of … actually a Department of State police training team but I was working for not only the state department there but hired by Dynacorp … they’re a contractor that hires cops,” he said.

There were also efforts by the Department of Justice, in the form of FBI task forces, as well as Department of Defense operations. Add in all the armies and agencies from foreign countries that were also stationed around Afghanistan and you begin to see just how unwieldy the whole operation became.

He described multiple instances in which Dynacorp management was out of lockstep with what the state department wanted, and vice versa, leaving him and others waiting for approval that had to pass through too many different desks. By the time a decision was made, the situation on the ground had already changed.

And changing situations were the only constant in Afghanistan. Days of training could be interrupted at any moment by people shooting, machine guns or rockets, at police buildings and convoys. A simple drive from one town to the next could be disrupted by roadside bombs and improvised explosive devices.

Martinak was helped overseas by an interpreter, a local who was not only helpful in communicating to other Afghans, but someone who knew how to quickly traverse the landscape and avoid danger.

“I owe that guy my life, he did us a lot of getting through town without getting blown up,” Martinak said.

He’s still in touch with the interpreter, who requested to go by his middle name of Ahmad so as to be less identifiable as someone speaking out against the Taliban. While Ahmad now lives in the United States, in Virginia, he fears for the safety of his family back in Afghanistan.

“Everyone knew I was working with the U.S. … they are looking for them … it’s a really big threat to my family,” Ahmad said.

He and Martinak spent time in the western towns of Farah and Herat. Their focus was on training up the border police, which was a crucial piece of protecting Afghanistan from military groups and drug runners who would sneak across the border from Iran.

Martinak described how the police force was a constant target for these groups.

“They lost a lot of cops because insurgents were coming all out of Iran,” he said. “They would attack the border police (with) six or eight Toyota pickups with … machine guns mounted on them … make an incursion into the country of Afghanistan and then flee to the safety of Iran.”

Ahmad was in charge of recruiting, as well as training officers at the shooting range. Eventually, he was promoted to be a legal interpreter for a provincial group created by the International Monetary Fund, which more directly aligned with Ahmad’s skillset. Although he became a pretty accomplished sharpshooter while working as a police sergeant, he graduated with a degree in law before joining the police training efforts.

Because he assisted U.S. forces in-country, Ahmad was able to get a special immigration visa and come to the United States. He’s lived here since February 2016. But not everyone who aided American troops in Afghanistan was so lucky. As the hasty withdrawal has shown over the past several weeks, many Afghans who worked for the U.S. military or diplomatic operations are stuck at the airport in Kabul or scattered in other parts of the country. They all fear retribution by the Taliban.

“They haven't even been able to evacuate the people who have been working with the US … there are many interpreters there on the ground,” Ahmad said. “All this happened very fast … no one was expecting this would happen one day.”

That sense of betrayal expressed by Americans witnessing the chaos of the withdrawal is even sharper among Afghans, Ahmad said. For people who spent the past 20 years building up their country, expecting a stable nation that could survive without American aid, the country’s quick fall to the Taliban represents an erasure of these hard-fought gains.

“What was the reason for all this? Why did so many people give their lives and their country?” Ahmad said. “But now all that achievement is gone. Everything.”

Troy Shinn covers healthcare, natural resources and Linn County government. He can be reached at 541-812-6114 or troy.shinn@lee.net. He can be found on Twitter at @troydshinn.

The Memorial Day Weekend observances kicked off at Timber Linn Memorial Park in Albany on Saturday, where 31 bricks were added to the walls co…

PHILOMATH – In honor of Armed Forces Day and Peace Officers Memorial Day, the tight-knit community of Philomath turned out by the dozens at Mt…

Hundreds gather in Linn County for 20th anniversary of 9/11

The shape of the 2022 election could take a step forward Sept. 20 with a special session of the Legislature called by Gov. Kate Brown.

Lebanon celebrated the grand opening of a 48-unit affordable housing complex, primarily geared toward veterans, on Thursday afternoon. The pro…

The body of contractor Ron Zimmerman is transported to the base after a suicide car bomb struck the convoy.

Workers prepare to remove the truck in which a contractor was killed during a suicide car bombing.

Randy Martinak stands along the Hare Rud, which is a river between Farah and Harat 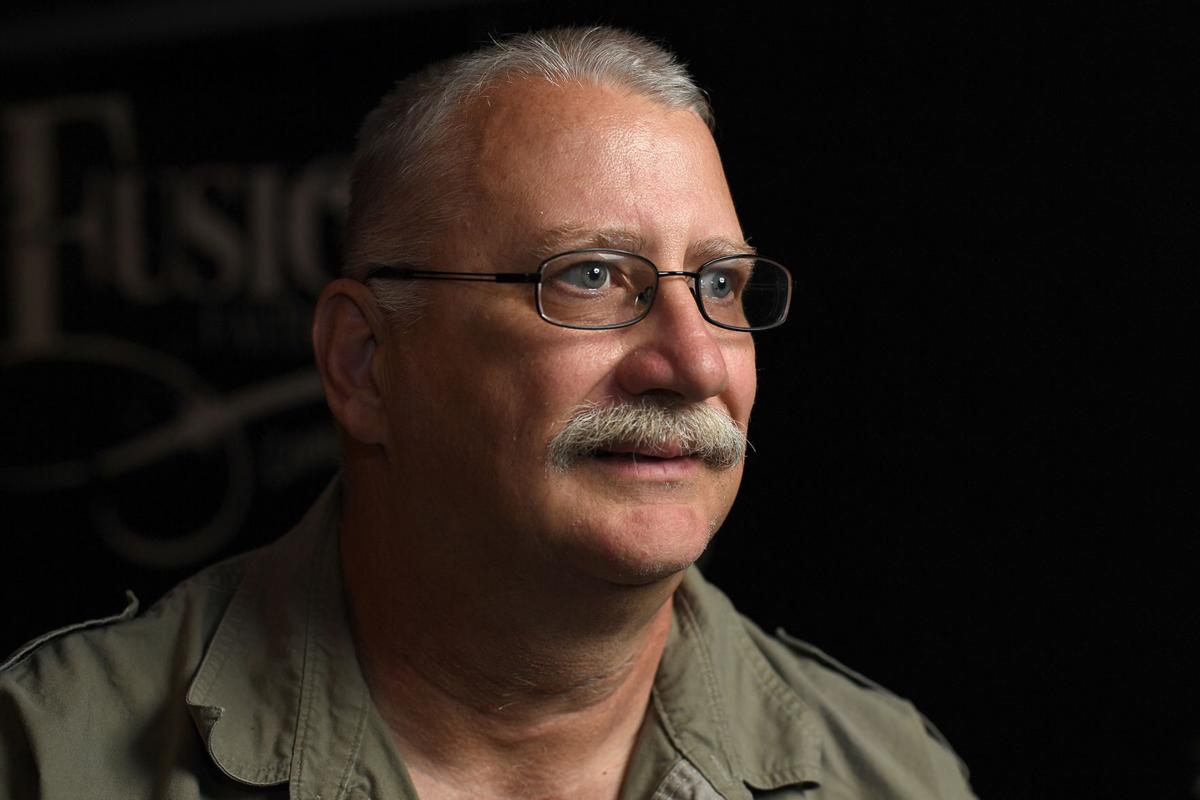 Chuck Zeitler, a pastor at Fusion Faith Center who pulled a man out of a burning semi truck on I-5. He works as a boiler room operator at the Oregon State Penitentiary.