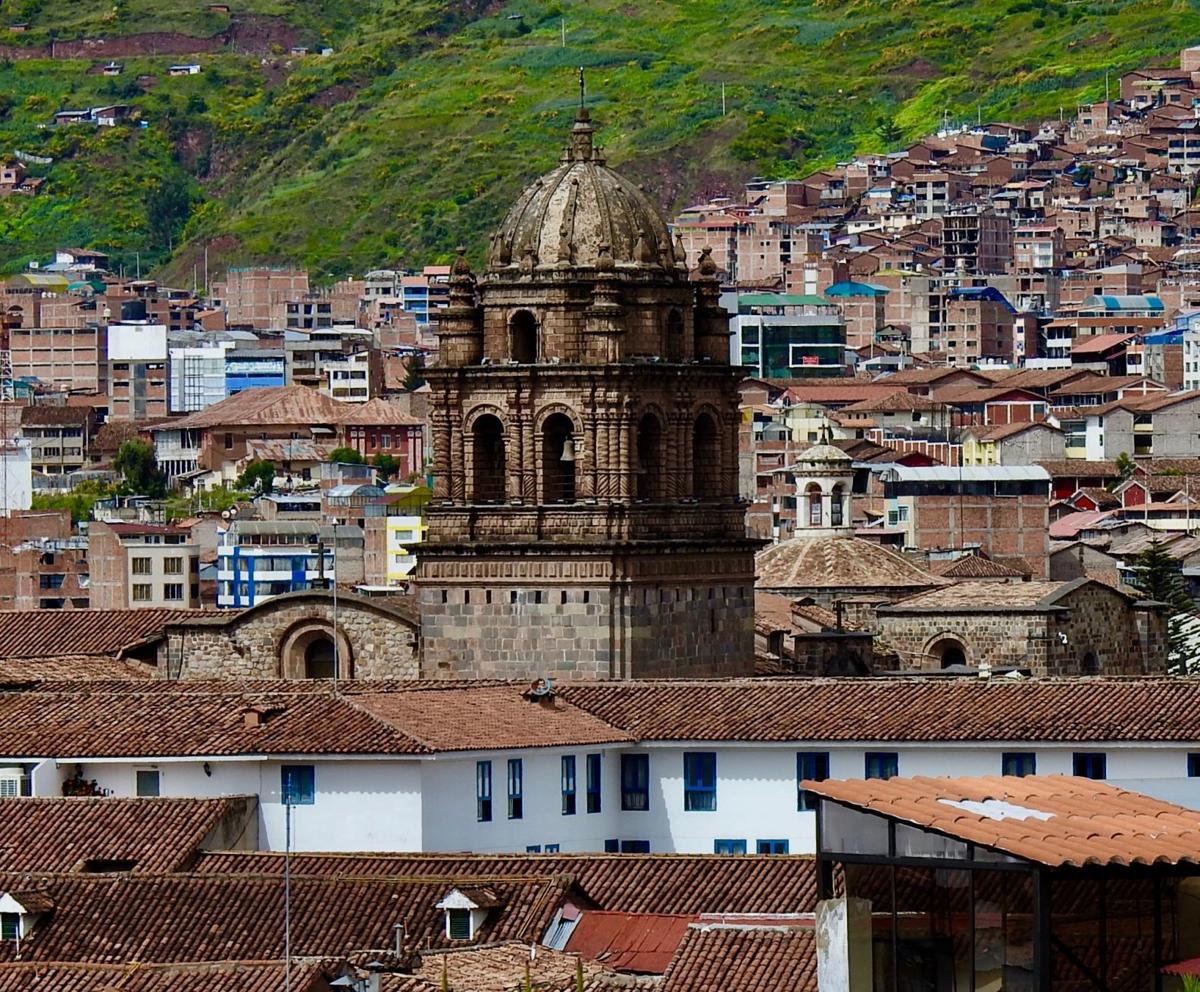 The Basilica Menor de Merced rises above the city skyline in Cusco, Peru. Albany residents Dena Minato and Dave Kullowatz can see the historic church from the roof of the guesthouse where they are staying while they await clearance to return to the U.S. Peru has closed its borders because of the coronavirus pandemic, leaving hundreds of American travelers stranded. 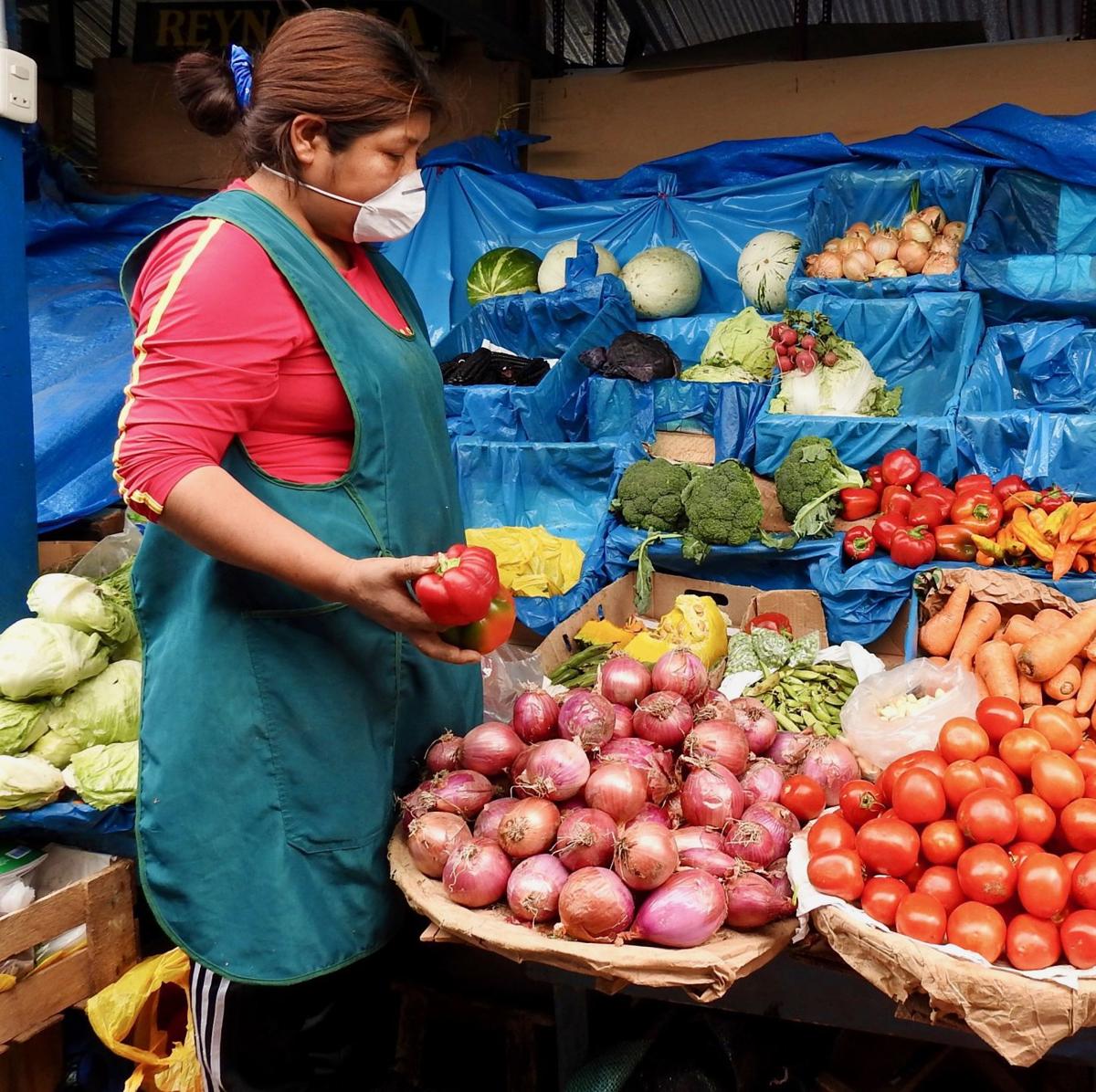 A masked woman works at a market stall in Cusco. 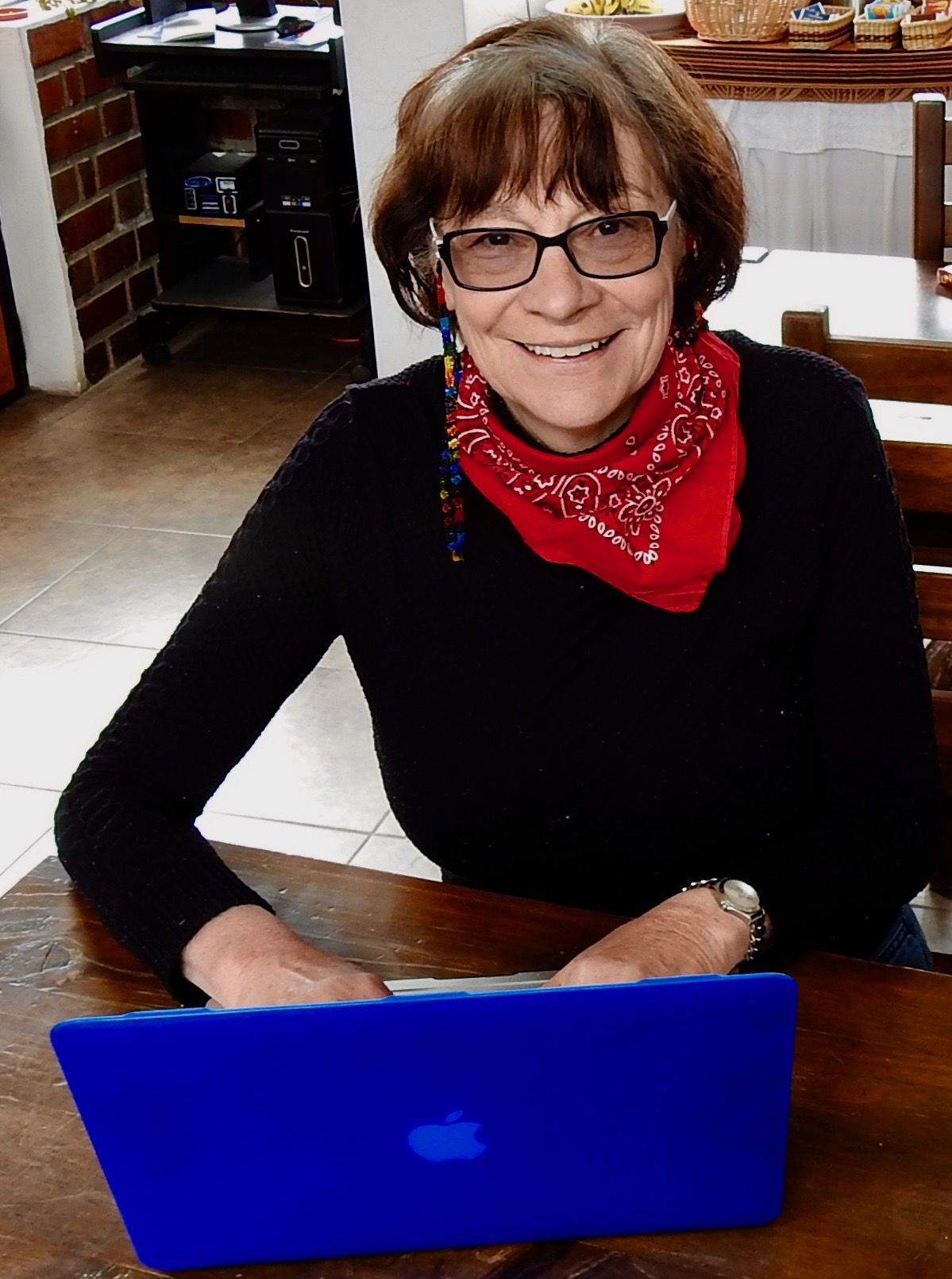 Dena Minato sits with her laptop, her link to the outside world while she is stranded in Peru.

Dena Minato and Dave Kullowatz have spent nearly four decades traveling together, and their trip this month was supposed to represent a meaningful milestone.

The couple of retired teachers embarked on a vacation to Peru in early March to celebrate their 39th wedding anniversary in the 39th country they have visited together. They planned to hike to Machu Picchu and venture to nearby Ecuador to see the Galapagos Islands during a monthlong holiday.

Instead, the longtime Albany residents have spent the past week quarantined in a guesthouse in Cusco, wondering when they will be able to return to the States.

Like hundreds of other Americans, Minato and Kullowatz are stranded behind closed borders in Peru due to the coronavirus pandemic. The country declared a state of emergency on March 15 and announced that it would shut down its borders for at least 15 days starting March 16.

“Our concern is we’ve watched a little bit of the news conferences, and the indication by some in our nation's leadership is that we all had this warning to get a flight out,” Kullowatz said. “We had really no warning. No official warning that you have 24 hours or 48 hours. It was just literally dropped on us.”

Several countries, including Canada and Israel, took measures last week to repatriate their citizens from Peru after it closed its borders. But the U.S. has yet to do so.

In a television interview Friday night, Peru’s defense minister said that Saturday would be the last day foreigners would be able to leave the country and said Peru would take “a much stricter measure.”

Oregon's congressional delegation has pushed for an immediate national response to help bring stranded U.S. citizens home. On Thursday, U.S. Sen. Jeff Merkley’s office released a statement announcing he and nine colleagues on the Senate Foreign Relations Committee sent a letter to Secretary of State Mike Pompeo “raising serious concerns about Americans struggling to return home after being stranded abroad due to the COVID-19 pandemic.”

“We recognize these are extraordinary times for the nation and the world,” the letter stated. “Yet this crisis calls for creative measures. We look forward to an immediate briefing on all steps the Department is taking, including working with foreign governments, commercial airlines, U.S. military and other agencies to ensure that every American can be safely returned home."

Sen. Ron Wyden’s office released a statement voicing similar concerns on Saturday. “Senator Wyden has amplified the concerns he’s heard from Oregonians stranded in Peru by raising their issues to State Department leadership. He has been told a task force is working to extract all Americans overseas, and he remains determined to make sure this task force translates into action that gives all Americans trying to leave Peru, and any and all other countries, clear guidance and urgently needed assistance to bring them home.”

Kullowatz, 65, is a former history teacher, while Minato, 63, taught English and journalism. They spent portions of their lives living in Turkey and the Netherlands, but said in all their travels they have never experienced anything like their current predicament.

Before they left the U.S., the couple spent plenty of time researching whether it would be safe to do so. There was no advisory against traveling to South America when they began their trip, and the city of Seattle alone had more confirmed cases of coronavirus than Peru and Ecuador combined at that time.

They spent two days stuck at the airport in Arequipa — their flight to Cusco, where they planned to stay and do most of their sight-seeing, was delayed due to inclement weather. During that time, they got no indication that staying in the country could be problematic. But when they arrived at their guesthouse in Cusco on March 15, they were told that the country had closed its borders.

Now they are trying to make the best of their situation and find as much joy as possible during an uncertain experience. They said they have made lifelong friends in the past week, and they praised the graciousness of their host, who has made sure they are comfortable in their hotel.

“We’re in a pretty good place,” Minato said. “I mean, it’s not the place we chose to be. Our families are worried. But it’s the uncertainty — if somebody told me right now, ‘You have a flight home on April 1st,’ I would be pretty comfortable. We’re being well taken care of. We’re managing well. But the uncertainty for our family is really difficult.”

They aren’t the only local residents looking for a way out of Peru. Robert Meinke, a retired Oregon State University professor, is stranded in Iquitos — a port city on the Amazon River.

Meinke worked in OSU's College of Agricultural Sciences, and now does part-time work for a natural history travel company. He was on an overseas trip with a birding group made up of eight Americans, including another former OSU faculty member, Kelly Amsberry.

They, too, arrived in Peru before the State Department had issued any travel advisories regarding the country. Four days after they arrived, they were on a river excursion when they received word via satellite phone that Peru would suddenly be closing all borders within 24 hours.

They were directed back to Iquitos by the Peruvian port authority and met by police at the dock on the night of March 18. Meinke said they were taken off the boat by armed officers and given an escort back to a hotel. Their party has been in the hotel since and is not allowed to leave.

“Early (Saturday) morning, I saw four 20-something American, or maybe Canadian, backpackers staggering through the plaza below my room,” Meinke said in an email. “They looked confused and frightened. Our hotel was locked and they couldn’t get in. They eventually moved on, but were certain to be detained or arrested if they couldn’t get off the street. It was heartbreaking to see.”

Getting out of Iquitos poses a particularly difficult set of circumstances; it is the largest city in the world that cannot be reached by road, only by river and air. Since there are no flights going out of the local airport, Meinke and his party would either need to reach the capital city of Lima for a commercial flight, or would need a charter flight directly from Iquitos, where he estimates there are more than 100 stranded Americans.

“Our embassy tells us nothing,” Meinke said.

He is concerned for stranded citizens who need medication, and is worried that some may run out of money if they lose access to ATMs.

“My group is resilient and tough,” Meinke said. “But unless the U.S. assists us as other countries have done for their citizens, we may be here a long time.”

A4: An update on student meal sites

A7: A full page of national/international news

A9: Stocks ride surge of optimism

B4: Tips on indoor workouts

B9: Working from home and home-schooling

Clean hands for everyone

Oregon Gov. Kate Brown is working on a multi-pronged mandate to slow the spread of coronavirus, but she is not expected to issue the full-fled…

An Albany pediatrics clinic has closed temporarily after a staff member tested positive for COVID-19 and several other people experienced symptoms.

The Oregon Health Authority reported 57 new cases of COVID-19 on Wednesday, including six in the mid-valley, bringing the tally of Oregonians …

With many kinds of medical supplies at a premium during the coronavirus pandemic, one Corvallis resident has found a unique way to help allevi…

The Basilica Menor de Merced rises above the city skyline in Cusco, Peru. Albany residents Dena Minato and Dave Kullowatz can see the historic church from the roof of the guesthouse where they are staying while they await clearance to return to the U.S. Peru has closed its borders because of the coronavirus pandemic, leaving hundreds of American travelers stranded.

A masked woman works at a market stall in Cusco.

Dena Minato sits with her laptop, her link to the outside world while she is stranded in Peru.