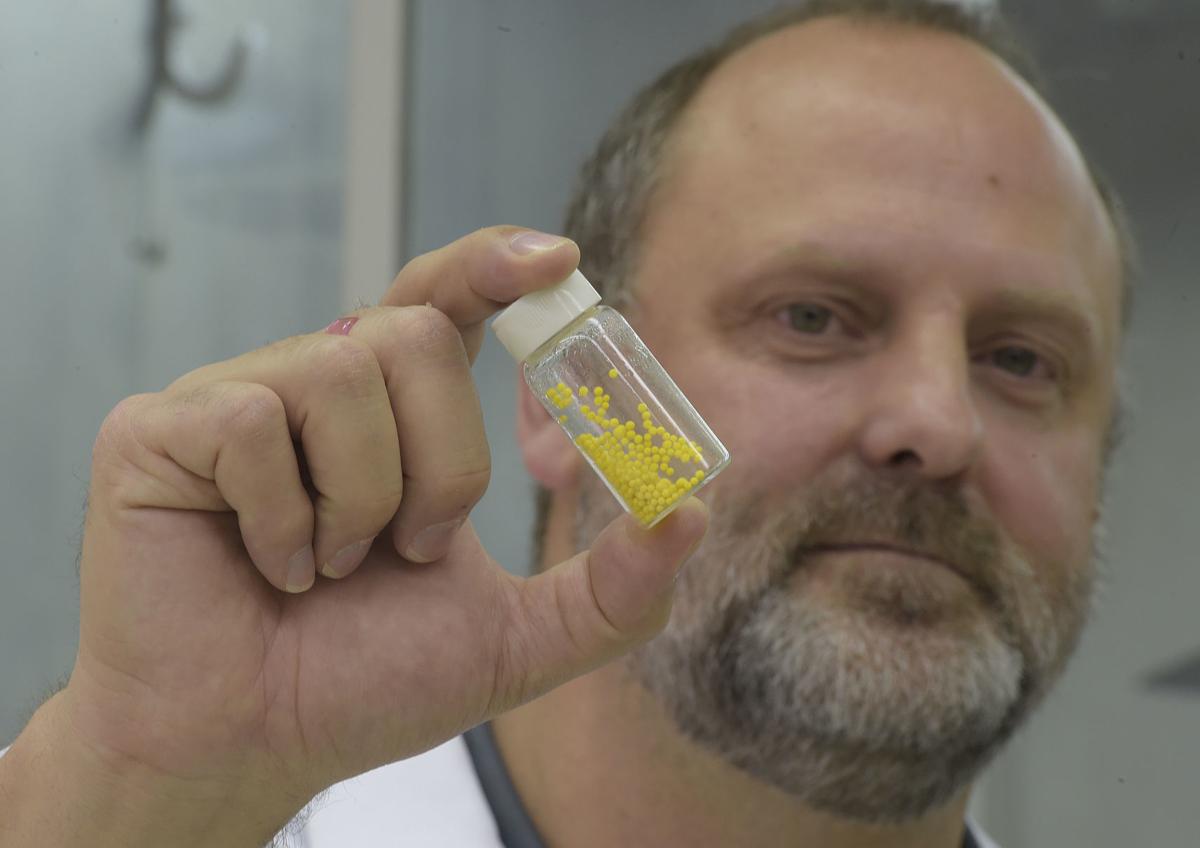 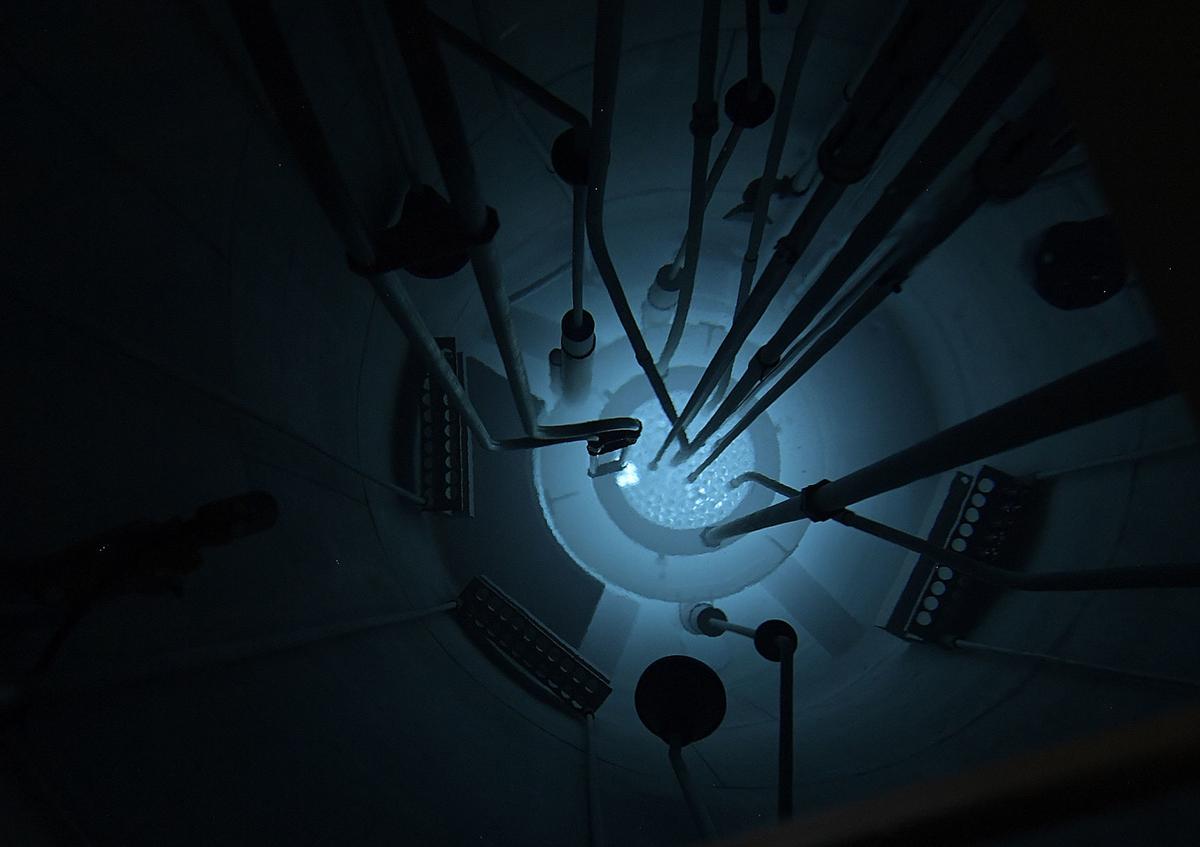 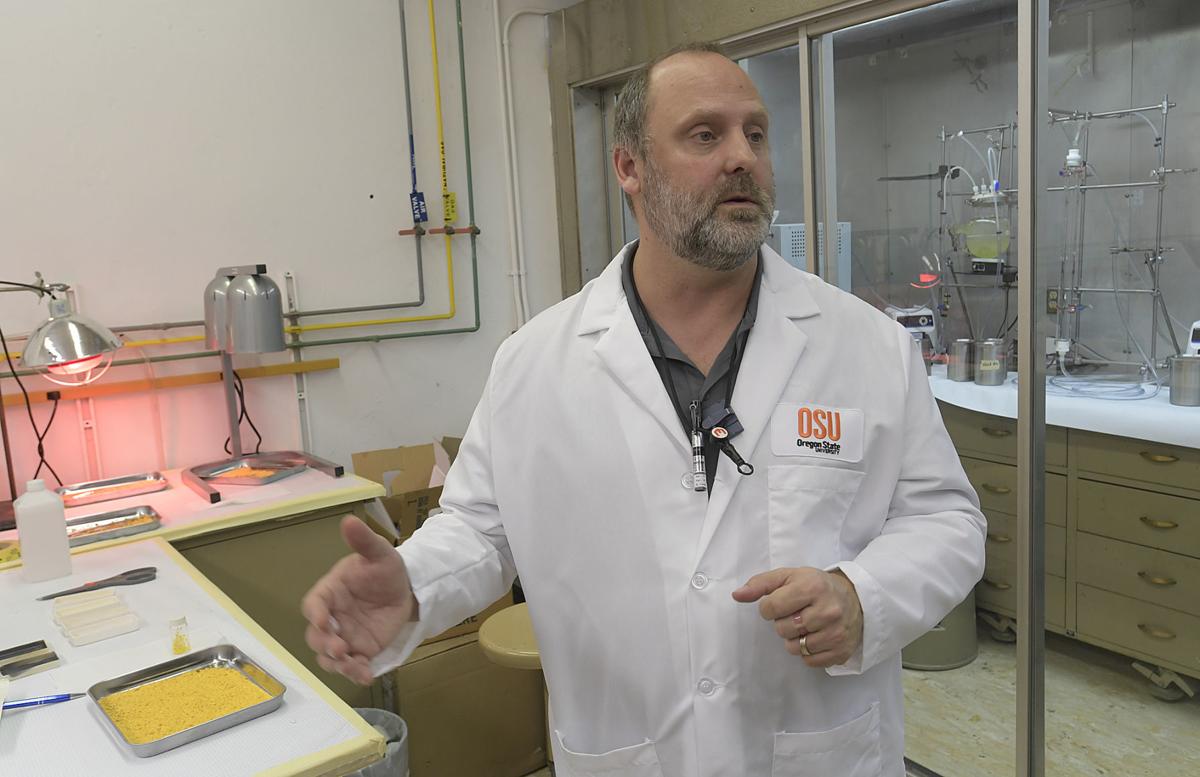 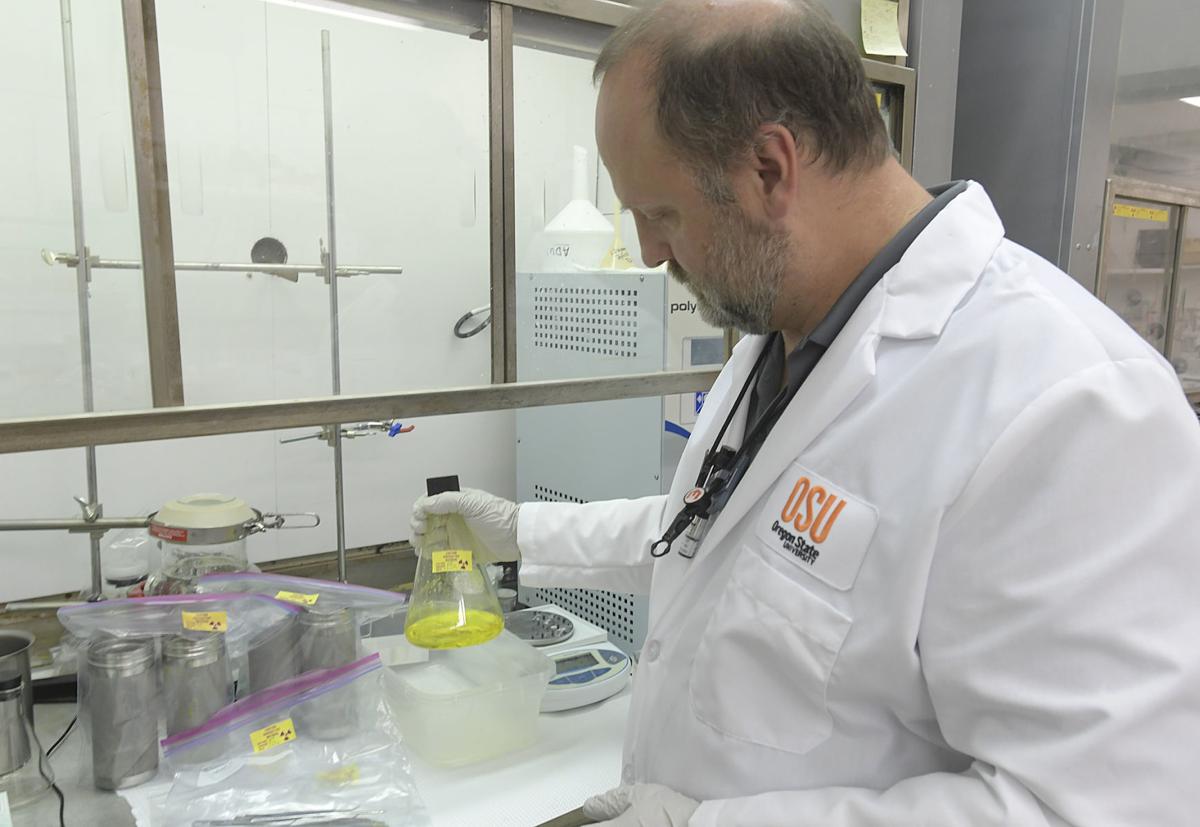 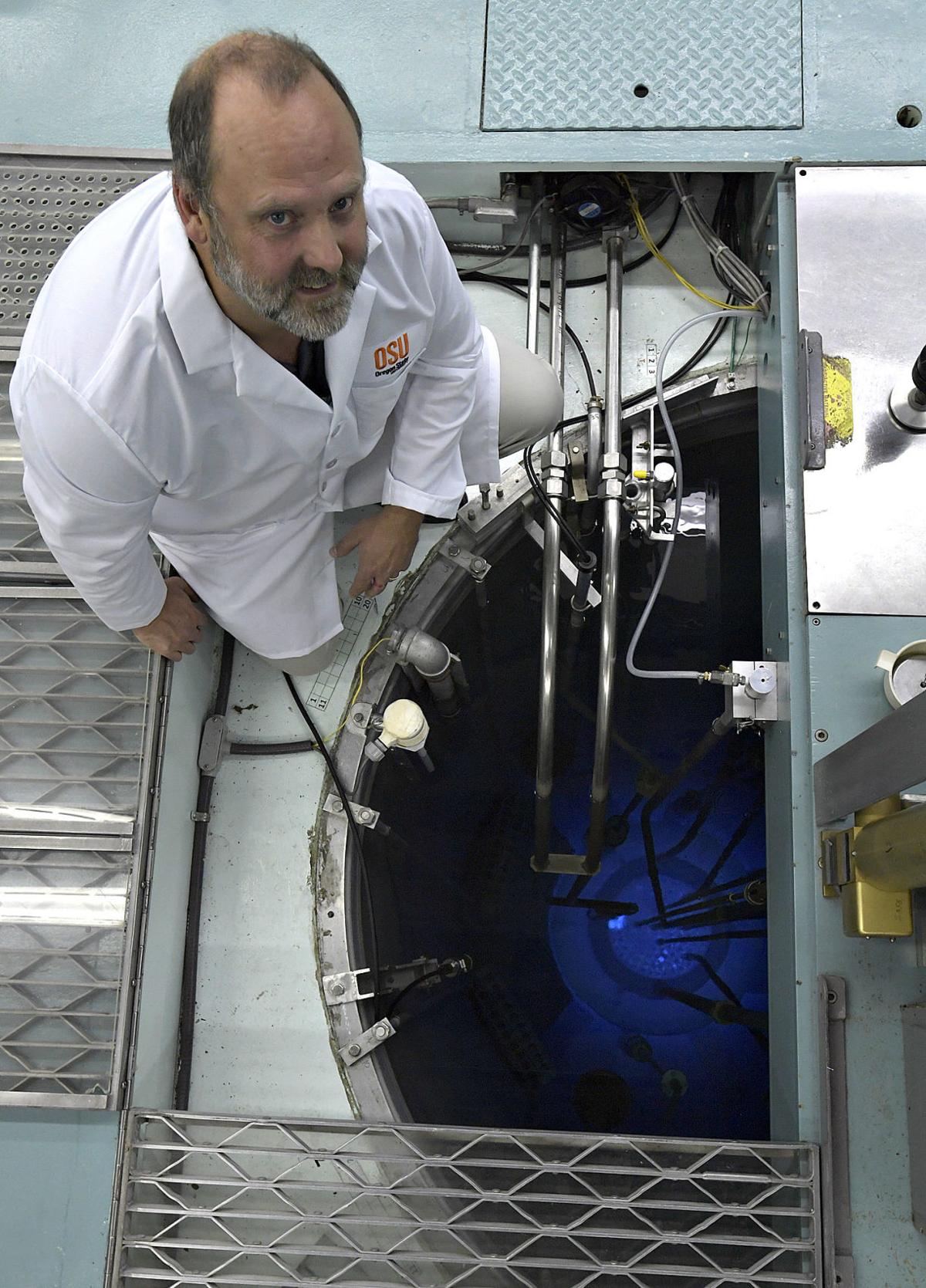 About 50,000 times a day, U.S. hospitals perform diagnostic procedures using technetium-99m, a radioactive isotope that enables high-quality imaging for bone scans and functional studies of the brain, heart, lungs and other organs.

Technetium is a byproduct of another isotope, molybdenum-99, which is generally produced — along with other radioactive elements — by splitting uranium atoms in a nuclear reactor.

But only a handful of research reactors around the world are set up to harvest the moly-99, as it’s known, creating a bottleneck that results in frequent moly shortages and subsequent delays in vital medical procedures. To make matters worse, the only source in North America (a reactor at Chalk River in Canada) ceased production in 2016.

A Corvallis startup using technology developed at Oregon State University is taking a novel approach to the moly supply problem — and the company got a big boost last week when it was shortlisted by the Department of Energy for up to $15 million in federal matching funds to help it get to production stage.

The company, called Northwest Medical Isotopes, was founded in 2010 by a consortium of investors that includes a number of regional health care networks, such as Corvallis-based hospital operator Samaritan Health Services, Montana’s Benefits Health System and Dignity Health, which operates 39 hospitals in California, Arizona and Nevada.

The venture is built around a patented device developed by four Oregon State researchers: Steve Reese, an associate professor in the School of Nuclear Science and Engineering and director of the OSU Radiation Center; Todd Palmer, a professor of nuclear science and engineering; Todd Keller, a reactor engineer in the Radiation Center; and Madicken Munk, who worked on the project as an undergrad and is now doing postdoctoral research in plasma physics at the University of Illinois.

The purpose of the device, called a target, is to hold tiny, round pellets of uranium oxide for insertion into the core of a nuclear reactor, where the fission reaction splits the uranium atoms into moly-99 and other isotopes.

What makes the target so intriguing from a business standpoint is its unique ability to pack the uranium pellets into a package that’s compatible with many different research reactors, not just the small pool that currently provides the world’s molybdenum-99 supply.

That includes the two dozen or so research reactors currently in use at U.S. universities, such as the 1.1 megawatt TRIGA Mark II reactor on the OSU campus.

“The secret is in the geometry,” Reese said. “You can put it in just about any research reactor in the world — we took the reactor out of the bottleneck.”

Northwest Medical Isotopes’ plan is to buy time in some of those research reactors — at OSU, the University of Missouri and possibly other institutions — to create a redundant, distributed production line for molybdenum-99.

But producing the moly is only the first step. Once you’ve done that, you still have to separate it from all the other isotopes generated during the fission reaction, and then you have to deliver it to the hospitals where it’s needed.

And here’s the kicker: You have a very limited time to get the material to end users all over the country before it becomes useless.

One of the things that makes technetium-99m such an ideal radioisotope for medical imaging is how rapidly it decays. With a six-hour half-life, the radioactive material has to be used almost immediately after it’s produced, but it also breaks down quickly in the body, minimizing the chance of harm to the patient.

Molybdenum-99 is also a radioactive element, and as it decays it continually produces technetium. But moly, too, has a short use-by date.

Moly-99 has a half-life of 66 hours, which means that 2.75 days after it’s produced, half of it is already gone. After two weeks, there’s virtually nothing left to produce technetium, so hospitals must constantly renew their supply.

To fill that market, companies like Northwest Medical Isotopes must be prepared to produce molybdenum on a continual basis, process it immediately and get it into the hands of distributors in the tightest of time windows.

“It goes from the reactor to the hospital in about 48 hours — it’s that quick,” Reese said.

“The analogy I use is we make ice, but we don’t have the luxury of a freezer.”

According to a report compiled by the World Nuclear Association, the global market for molybdenum-99 is worth roughly $550 million a year. About half of the demand is coming from the United States, and it’s increasing every year as the population ages and medical diagnostics get more sophisticated.

The combination of growing demand and uncertain supply represents a major opportunity for a company like Northwest Medical Isotopes.

Making moly in the United States would give the firm a significant advantage in the domestic market over established foreign suppliers with longer shipping times, according to Larry Mullins, the former president and CEO of Samaritan Health Services who is now executive chairman of Northwest Medical Isotopes.

“That’s why we believe having production in North America is so critical. It removes a lot of the risk factors — time, distance, politics.”

Plans are in the works for a 60,000-square-foot processing facility in Columbia, Missouri, which would give the company easy access to the University of Missouri’s research reactor and provide a central location for North American distribution.

The $108 million plant (the estimated price tag has doubled since it was first proposed in 2014) is expected to employ at least 85 people at salaries averaging $35 an hour. The company received a construction permit from the federal Nuclear Regulatory Commission last May and was granted a 10-year, 50 percent property tax abatement in September. With negotiations on a land lease in Columbia’s Discovery Ridge Research Park nearing completion, Mullins hopes to begin moving dirt on the project soon.

“We would hope to break ground this year, within the next few months,” he said. “We expect to be in production by 2024.”

The company’s investors are well-positioned to finance the plant’s construction and startup costs, Mullins said. He also said the firm is in advanced discussions with potential distributors, including one that “wants to buy everything we can make.”

But Northwest Medical Isotopes has at least one more significant hurdle to clear before it can start cashing in on the moly market. The company still needs final approval from the Nuclear Regulatory Commission, an expensive and time-consuming process.

That’s where the federal funding opportunity comes in.

In 2012, concerned about ongoing disruptions to the U.S. molybdenum-99 supply, Congress passed the American Medical Isotopes Production Act to encourage domestic production. Last week the National Nuclear Security Administration, a division of the Department of Energy, announced that it had completed a technical review of a proposal from Northwest Medical Isotopes and was ready to begin negotiations on a cooperative agreement.

Those talks could result in up to $15 million in DOE funding for Northwest Medical Isotopes, which the company would have to match. According to Mullins, that would probably be enough cash to get the firm over the finish line to commission approval.

Perhaps even more important, however, is the implicit stamp of approval the government announcement represents for his fledgling enterprise.

“The cash is great,” Mullins said, “but as much as anything, I think the validation is what was important — because it makes a statement that what we have here is worth considering.”

Northwest Medical Isotopes is not the only company in the running for federal funds. Three other firms also made the cut to be considered for the National Nuclear Security Administrtion funding opportunity: NorthStar Medical Radioisotopes LLC of Beloit, Wisconsin; SHINE Medical technologies of Janesville, Wisconsin; and Niowave Inc. of Lansing, Michigan.

But Mullins thinks Northwest Medical Isotopes has some unique advantages of its own, including an investor group that’s heavily weighted with hospital operators, providing both market savvy and an incentive to keep prices moderate.

“Our investors are ultimately our consumers,” he said. “If we have a lower cost of operations, that benefits everybody.”

And Reese believes the company has another built-in edge: simplicity of design. The other three ventures in line for the current round of DOE funding are all working on innovative production systems that rely on particle accelerators or other nontraditional methods rather than nuclear fission to make moly.

By contrast, Northwest Medical Isotopes relies on a clever yet relatively straightforward improvement to that tried and true approach, which should be much easier to attain.

“We are not creating a new technology — we are perfecting an existing, off-the-shelf technology,” Reese said. “These other companies are relying on brand-new technology.”

Here is a look at updates on stories that we have been tracking: