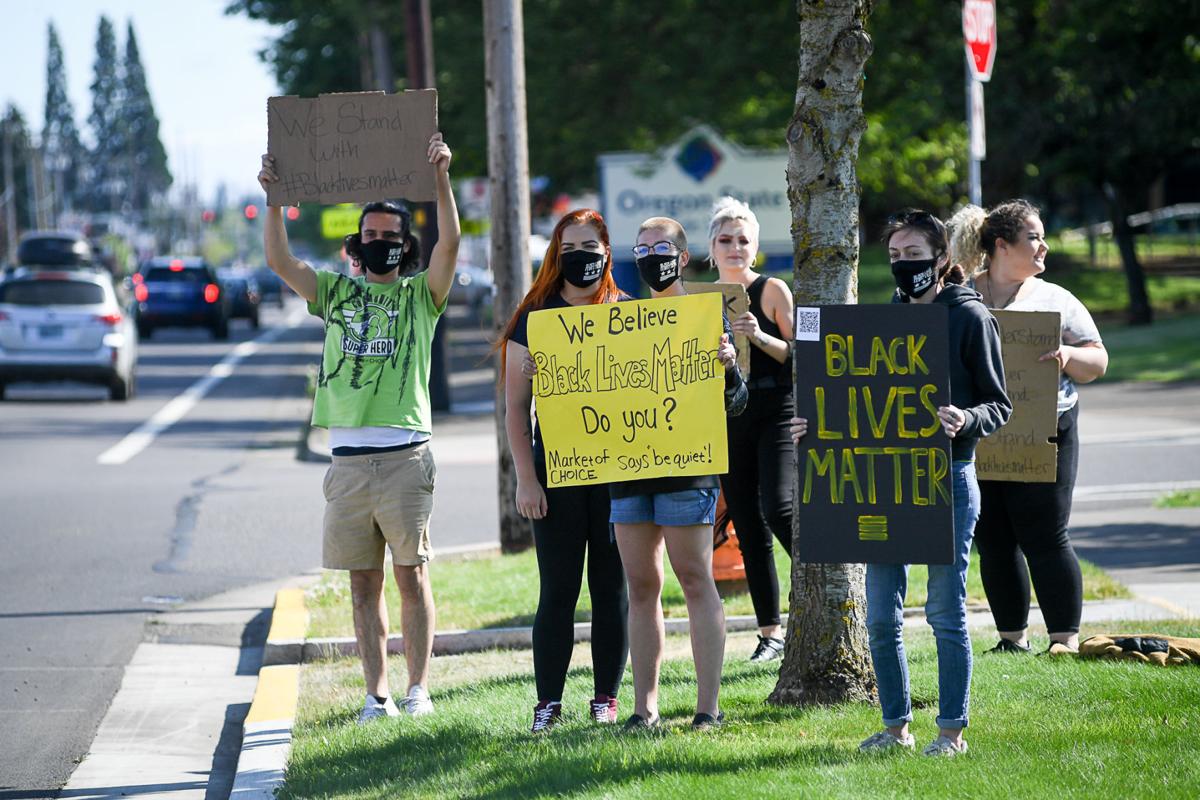 Protesters wave at cars on Northwest Ninth Street in front of Market of Choice in Corvallis. Employees have protested since Friday after the company said they couldn't wear Black Lives Matters masks on the clock. 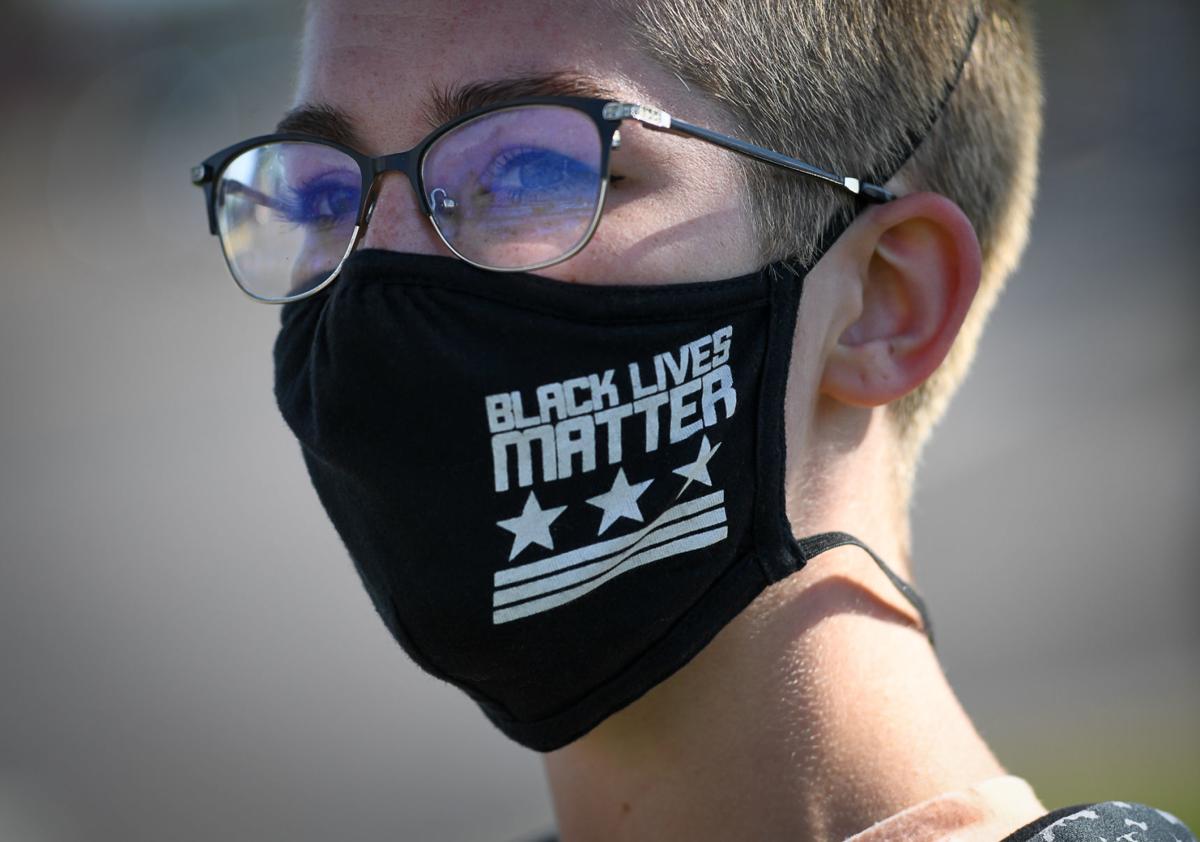 Abbi Bowen, a bakery clerk at Market of Choice, wears a Black Lives Matter face mask during a protest outside the Corvallis store on Tuesday. Employees learned late last week that they could no longer wear the masks at work.

But apparently not when it comes to its employees and their choice of protective masks while on duty.

The supermarket chain’s decision to not allow Black Lives Matter face coverings while on the clock has resulted in a manager of the Corvallis store being out of a job and employees and community members protesting outside the Northwest Circle Boulevard store and other locations.

This comes after a June 12 social media post by Rick Wright, Market of Choice’s CEO, who acknowledged the recent focus on racial bias in the United States and urged that steps be taken to remove it from the country.

“At Market of Choice, we stand with the Black Community. We believe Black Lives Matter. We support our Black Team Members, Customers and Vendors and do not tolerate racial bias, discrimination or injustice at our stores or in our communities,” Wright said.

He added later in the post: “Now is the time to write the final chapter of a dark history of systemic, nationwide problems and create a new story based on equality and civil rights. Our company is actively learning ways for us to take action. These steps will be in response to this historic movement, so we want to be intentional with our choices.”

But 10 days later, several employees of the Delta Oaks location in Eugene walked out on their jobs after they claim they were told by someone in the company’s human resources office to remove their Black Lives Matter masks.

Ian Luthe told The Register-Guard in Eugene that he was fired from his manager position at the Corvallis store last Friday because he also refused to take off his Black Lives Matter mask. Market of Choice, in a statement Monday, refuted the claim that Luthe was fired.

“I just hope for a policy change. I’m not necessarily looking to get rehired,” Luthe told the Register-Guard.

Employees in Corvallis had been wearing the Black Lives Matter masks for several days earlier in the week. Employees on Friday were told to take off such masks or leave. Several decided to go outside the Corvallis store to protest. Daily protests continued through Tuesday.

Protests have also been held at several other Market of Choice locations, including the Eugene corporate headquarters. Market of Choice has five stores in Eugene, three in the Portland area and others in Ashland, Bend and Corvallis.

In response to the company’s decision regarding the masks, Luthe said he turned in a 30-day notice that he would be leaving the company a week earlier, the Register-Guard reported.

He declined to comment for this story, saying he didn’t want to do any more interviews.

“We just don't understand how the company can release a statement saying they support the cause, but won't let their employees stand in solidarity,” said a current employee of the Corvallis store, who wanted to remain anonymous for fear of retaliation, in an email this week.

The employee later said a recent change in the company’s employee handbook prevented workers from talking with the media.

Corvallis employees were given masks in mid-March with no restrictions for what could be on them. They were encouraged to be creative with the masks, the employee said.

The statement says that, since Wright’s June 12 post, store managers have met with every employee — 1,300 in all — and that discussions “have inspired ideas for how we can enhance our contributions and support our Black, Indigenous and People of Color (BIPOC) Communities.”

Market of Choice is increasing the size and representation of its equity and inclusion committee and partnering with organizations across the state to expand a combined outreach and support of BIPOC businesses, the statement read.

In a time when most small businesses, including his own, are struggling, Jeffery Sawyer still felt that he needed to do something to help.

“I’m a student above anything else,” said Corvallis resident Ronny Junkins.

The Benton County Board of Commissioners has issued a statement condemning systemic racism, pledging to examine the county’s own shortcomings …

Protesters wave at cars on Northwest Ninth Street in front of Market of Choice in Corvallis. Employees have protested since Friday after the company said they couldn't wear Black Lives Matters masks on the clock.

Abbi Bowen, a bakery clerk at Market of Choice, wears a Black Lives Matter face mask during a protest outside the Corvallis store on Tuesday. Employees learned late last week that they could no longer wear the masks at work.