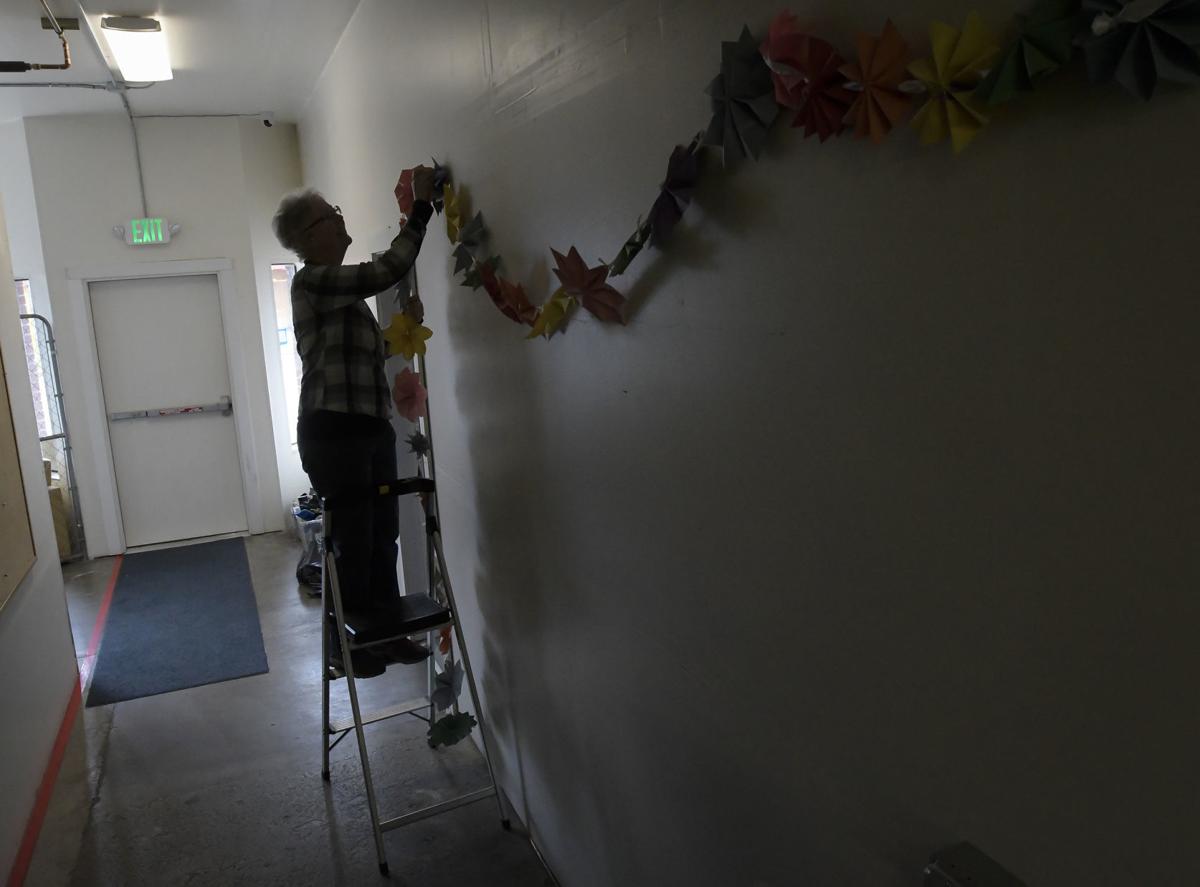 Sherrie Day removes decorations at the Men's Cold Weather Shelter on Monday after it closed for the season. She is the shelter’s co-chair for volunteer recruiting. 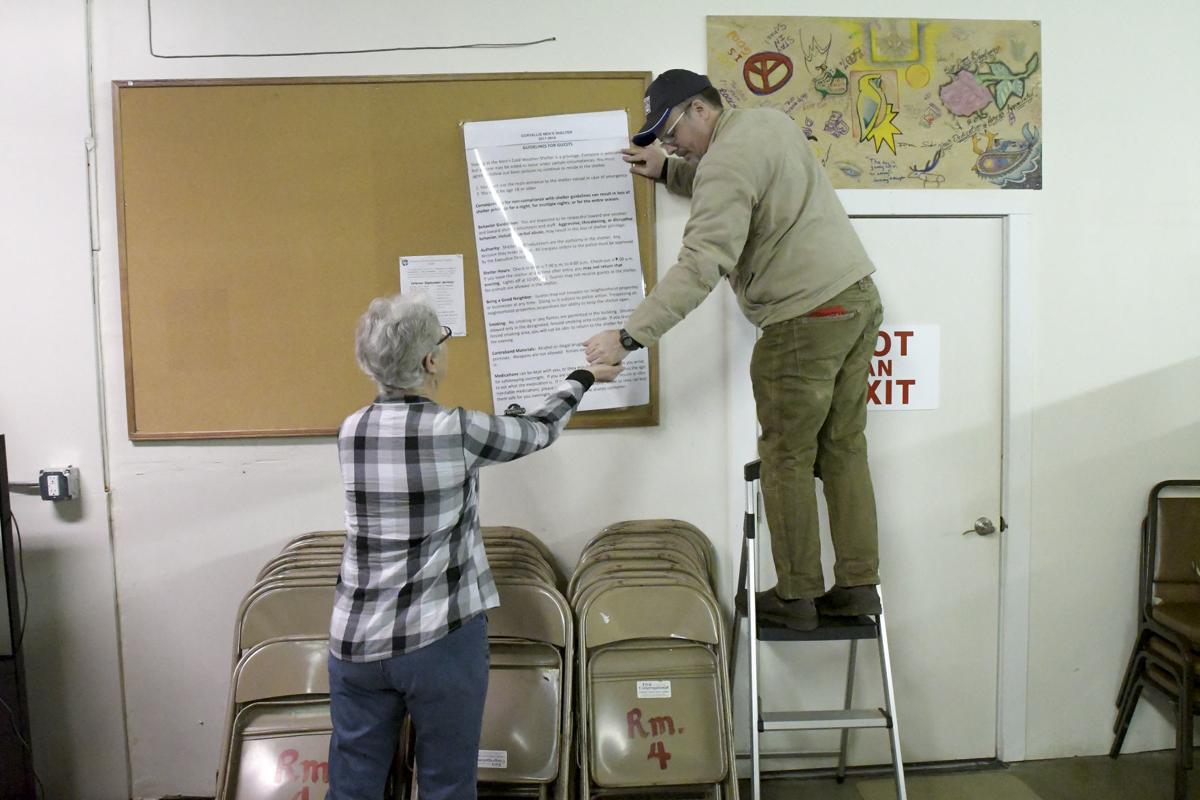 Day and Shawn Collins, program manager for the Housing Opportunities Action Council, remove items from the men's shelter on Monday after it closed. 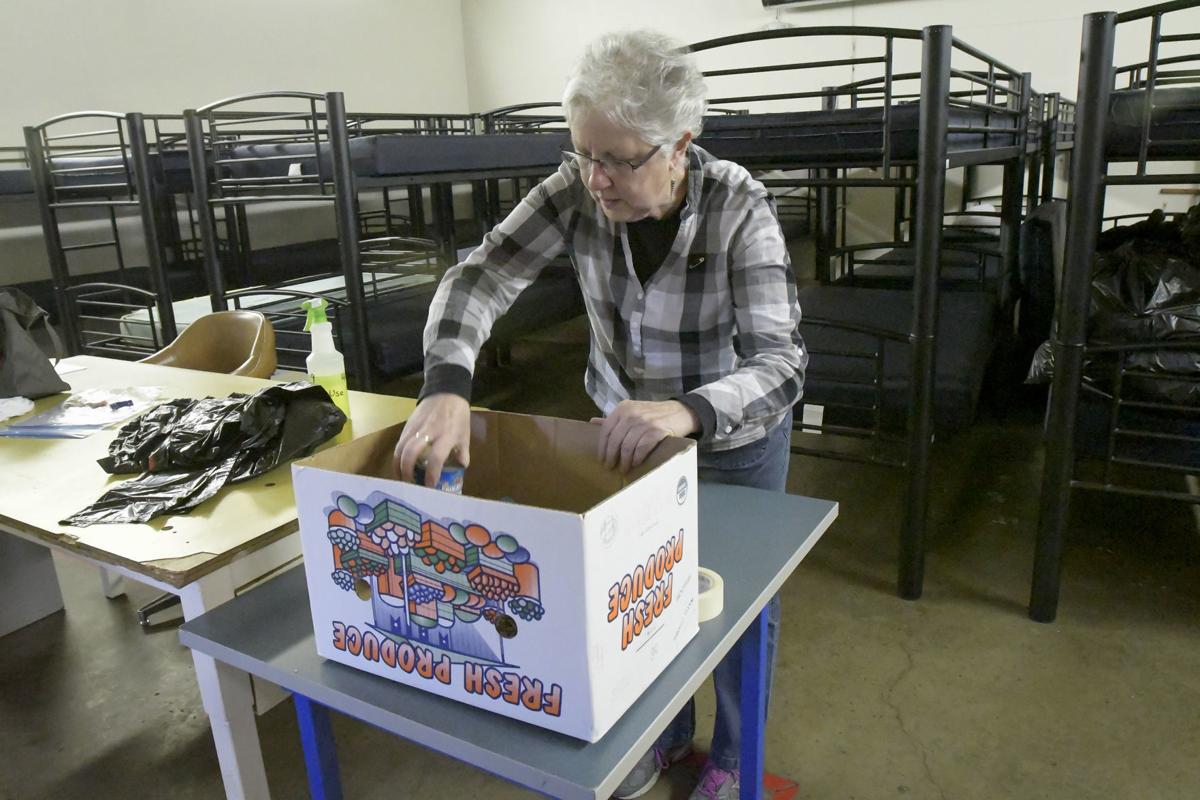 Sherrie Day cleans up the Men's Cold Weather Shelter on Monday after it closed for the season.

The Men's Cold Weather Shelter closed for the season on Monday, leaving 50 fewer beds in Corvallis to house homeless men.

The shelter was located this season in the former Hanson Tire Factory at Highway 99 West and Southeast Chapman Place, but that location was intended only as a stopgap while the search continued for a permanent location. It's not clear where the shelter will be located when it reopens in the fall.

Shawn Collins, program manager for the Housing Opportunities Action Council, which operates the shelter, said men staying at the shelter had been allowed to leave possessions in plastic tubs or their beds during the day when the shelter was closed. But on Monday morning, they had to move all those possessions out of the shelter.

Over the next couple of weeks, Collins said, volunteers will be packing the beds and bedding used at the shelter into a single bay in the building. Devco Engineering, which owns the building, will allow the shelter to use the bay for storage until a new shelter location is identified.

Devco stepped forward to allow the building to be used as a shelter this season after the former Men’s Cold Weather Shelter site downtown was forced to close after the winter of 2016-17 as part of the settlement of a lawsuit filed by a neighbor.

“Devco has been an awesome partner, super-flexible and supportive,” said Collins. “This (location) worked out as well as it possibly could have.”

Collins said the open layout of the Devco building was good because it allowed just a couple of people to monitor the whole site. The previous shelter, he said, had many nooks and crannies and was on two floors, so it was harder to supervise.

Collins said there were a lot of lessons learned from having the shelter at this location this year. One of the biggest lessons was that there are homeless people with medical conditions that are beyond the shelter’s ability to handle.

“To those who think Corvallis doesn’t care about its homeless people, that just isn’t true.”

He said while there is a gap between what services the community can provide people and what people need, that gap isn’t because of a lack of caring.

Collins said that willingness to help extends to people who are contacting the council about potential locations for the next season.

“I can’t discuss specific properties, but the hunt is definitely still on,” he said.

Collins said the committee that has been seeking a location for the new shelter continued to meet during the winter.

"We’re definitely still looking for places. I’m hoping we’ll have some more concrete answers in the next month,” he said.

However, he said he couldn’t make predictions on when a location might be found.

“We’re hoping to identify a place very quickly, so we don’t have the mad scramble we did last year,” he said. The opening of the shelter at the Devco building in November was delayed a few days because remodeling was not complete by the planned opening.

Collins said he thinks people are starting to realize that homelessness isn’t a problem that will go away if nothing is done about it.

Once a permanent location is found, he said he hopes the focus of the council can shift from that search to doing a better job of providing services.

“I want to get out of answering where are we going to do it and onto how we can do it better,” he said.

He added that this time of year, when the shelter is closing, is tough.

“You see (the men) here every night for five months, and you see their health improving and then you have to turn them out and say ‘good luck,’” he said.

Sherrie Day, the shelter’s co-chair for volunteer recruiting, said after getting to know the men it is hard to see them scrambling to figure out where they will stay now that the shelter is closed.

“It’s heart-rending to watch,” she said.

She added that the community has stepped up as volunteers and nearly 400 people volunteered at the shelter this year. And those volunteers are not done yet, she said; many of them have plans to stay in touch with the men through the Corvallis Daytime Drop-In Center and help out as needed.

“From my perspective, the facility is closing but the work goes on,” she said.

For information about volunteering with the shelter, contact Sherrie Day at corvmensshelter@gmail.com.

Men’s shelter, other services to move to Second Street building

Three area social service agencies have teamed up on a plan to locate their operations in the same building on Southwest Second Street.

Sherrie Day removes decorations at the Men's Cold Weather Shelter on Monday after it closed for the season. She is the shelter’s co-chair for volunteer recruiting.

Day and Shawn Collins, program manager for the Housing Opportunities Action Council, remove items from the men's shelter on Monday after it closed.

Sherrie Day cleans up the Men's Cold Weather Shelter on Monday after it closed for the season.