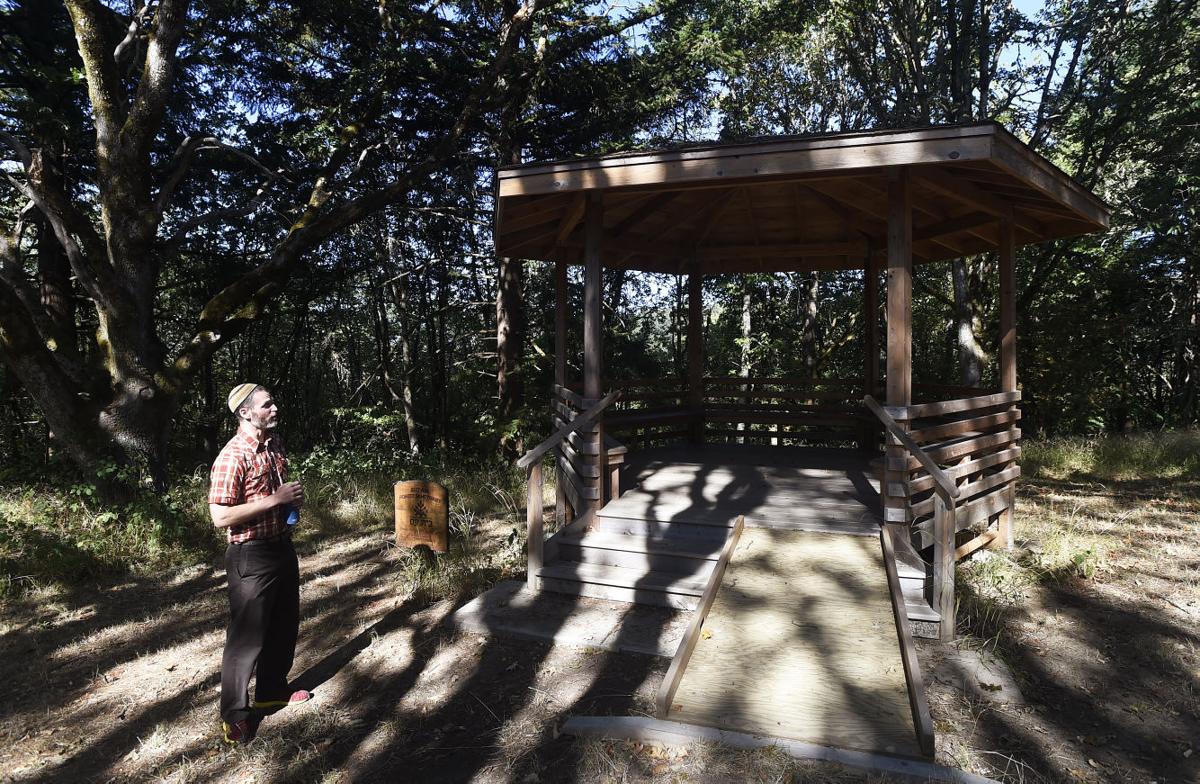 Rabbi Benjamin Barnett pays a visit to the Beit Am Forest Sanctuary on Tuesday. Beit Am, the mid-valley's only organized Jewish congregation, hopes to build a synagogue on the wooded property off Northwest Harrison Boulevard. 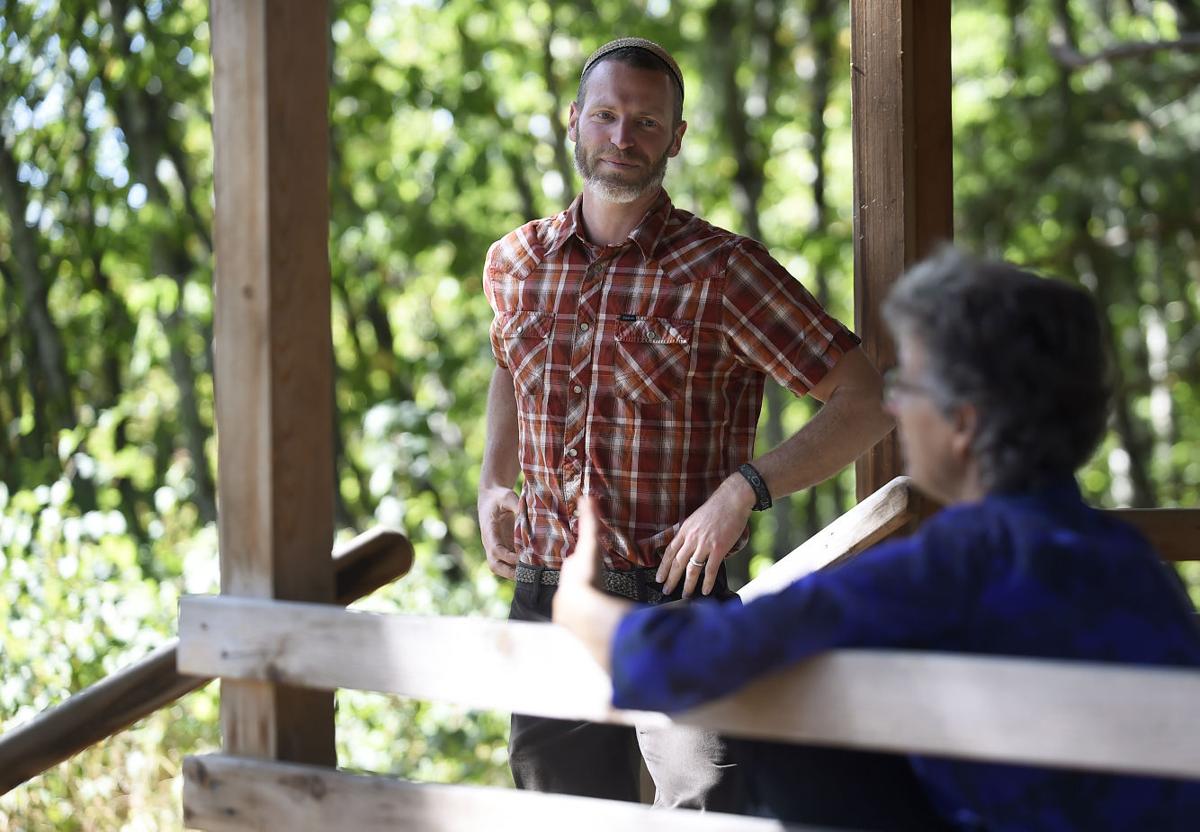 Rabbi Benjamin Barnett listens as Jana Kay Slater, president of the Beit Am board of directors, talks about plans for the new synagogue. 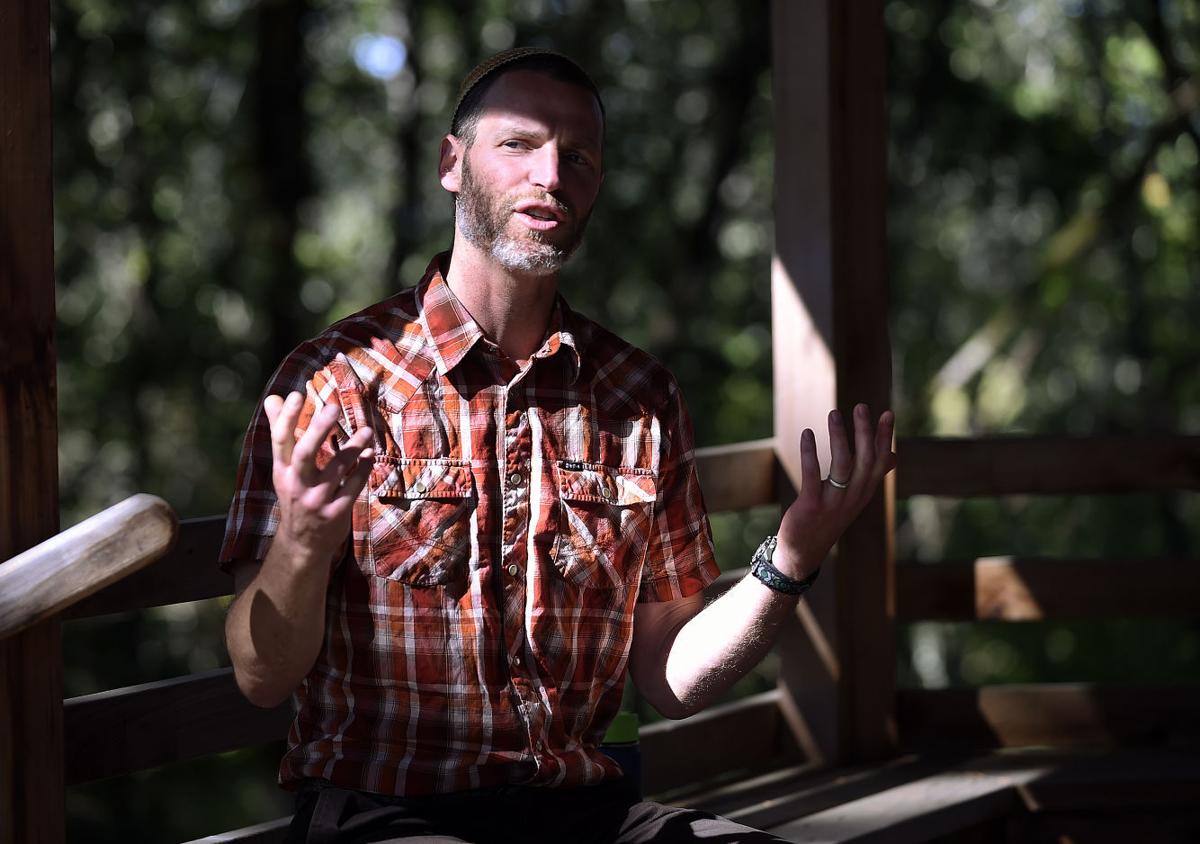 It’s been 15 years since Beit Am bought land for a synagogue on the western edge of Corvallis. Now, after a period of quiet but intensive fundraising and the apparent resolution of a tricky permitting issue, the mid-valley Jewish congregation is almost ready to start construction.

“We’re not at our goal yet,” said Rabbi Benjamin Barnett, “but we’re getting there.”

Beit Am, the only organized Jewish congregation between Eugene and Salem, has been meeting at a two-story house on Northwest 36th Street in Corvallis since 1982, when the group numbered about 25 families. With 140 families among its membership today, Beit Am has long since outgrown that space.

“Our most sacred days of the year are coming up — Rosh Hashana and Yom Kippur — and we rent space at the Unitarian Fellowship,” Barnett said. “That’s what we do for all our bar and bat mitzvah ceremonies.”

If all goes according to plan, however, they won’t be renting space much longer.

The group has raised more than $1.5 million toward what is expected to be a minimum of $2 million needed to build the mid-valley’s first synagogue. More money will still have to be raised before construction can begin, but Barnett thinks the project could get started within a year.

“Our hope is to break ground by the summer of 2016,” he said. “That might be an ambitious hope, but that’s the hope.”

Nir Pearlson of Eugene has been retained as the architect on the project, and Gerding Builders of Corvallis is the general contractor.

While the design is still in the conceptual stage, preliminary plans call for a structure of about 8,000 square feet on the congregation’s wooded 5-acre property, located on a hill behind the Mormon church at 4141 N.W. Harrison Blvd.

In addition to a sanctuary, the synagogue will have classrooms, a social hall, a kitchen, a library and an office for the rabbi, according to Jana Kay Slater, president of the Beit Am board of directors. There will also be an outdoor playground and a trail to the congregation’s forest sanctuary, a gazebo-like structure in an oak grove at the northern end of the property.

The plans have been shaped to a large degree by input from members of the congregation, many of whom took part in a series of meetings to discuss the project. They said they wanted a light and airy design that used environmentally friendly construction techniques and conveyed a feeling of being connected to nature, according to Slater.

“We have engaged our membership,” she said. “People are very excited.”

Beit Am also appears to be well on the way to solving an issue that had threatened to stall the project.

The congregation’s property is just outside the city limits but relies on the Corvallis Fire Department for fire protection, and the city fire marshal had expressed concerns that a well would not provide an adequate water supply for the new synagogue’s sprinkler system. Connecting to the city water system would solve the problem, but that would require annexation of the property into the city limits.

In Corvallis, annexations require voter approval, a time-consuming proposition with an uncertain outcome. When Beit Am asked the city to waive that requirement, city staff recommended against it.

But during a public hearing on Tuesday, the City Council appeared to signal a willingness to compromise, directing the staff to move ahead with a draft ordinance that would allow exceptions to the annexation requirement with certain conditions, including a requirement that the property could be put on the ballot for annexation at a later date to be determined by the city.

They also asked the staff to add some additional provisions aimed at staving off a flood of similar requests from other property owners in the future, such as limiting waivers to properties that are adjacent to the city limits and need city water to meet fire code requirements.

The council is expected to take up the matter again in the near future, perhaps as early as Sept. 21, according the City Manager Mark Shepard.

Barnett, one of several members of the congregation who testified at Tuesday’s hearing, said he sees nothing in the proposed ordinance that would keep Beit Am from moving forward with its plans.

“We felt very positive about the meeting,” he said on Thursday. “We feel confident that there is going to be a solution that is going to allow us to resolve the issue.”

People interested in donating to the Beit Am building fund can contribute online at www.beitam.org/NBC-donate

Rabbi Benjamin Barnett pays a visit to the Beit Am Forest Sanctuary on Tuesday. Beit Am, the mid-valley's only organized Jewish congregation, hopes to build a synagogue on the wooded property off Northwest Harrison Boulevard.

Rabbi Benjamin Barnett listens as Jana Kay Slater, president of the Beit Am board of directors, talks about plans for the new synagogue.