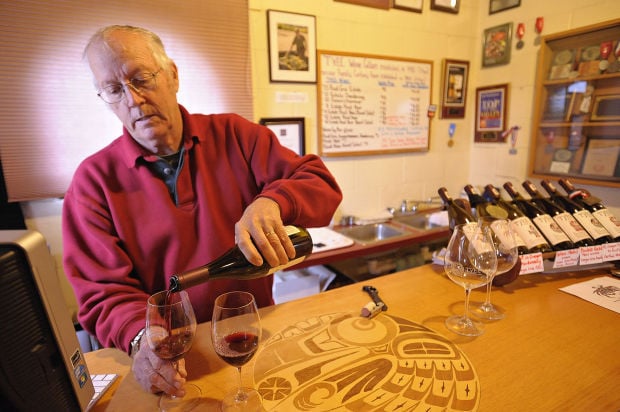 Dave Buchanan, co-owner of Tyee Wine Cellars, pours a glass of the winery's award-winning Pinot Noir in the Tyee tasting room on Friday. 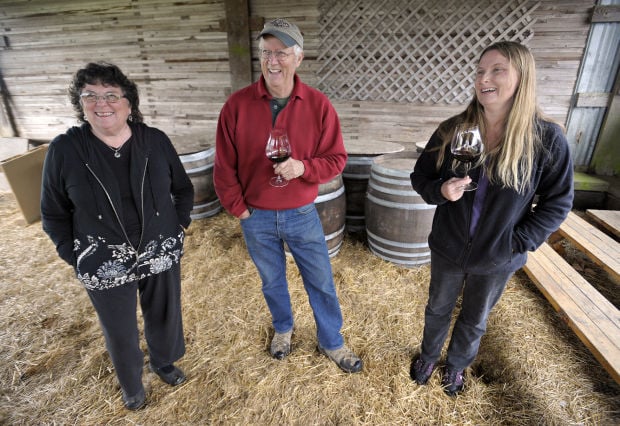 Tyee Wine Cellars owners Margy Buchanan, left, Dave Buchanan and Merrilee Buchanan Benson raise a toast with their top-rated Pinot noir. Long overshadowed by the big-name producers in the northern part of the Willamette Valley, Corvallis-area wineries are starting to get some recognition. 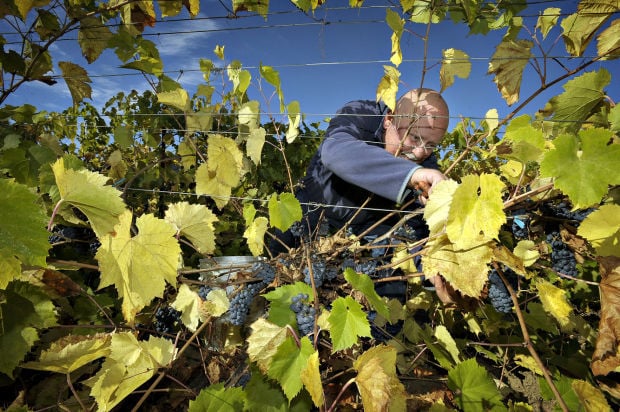 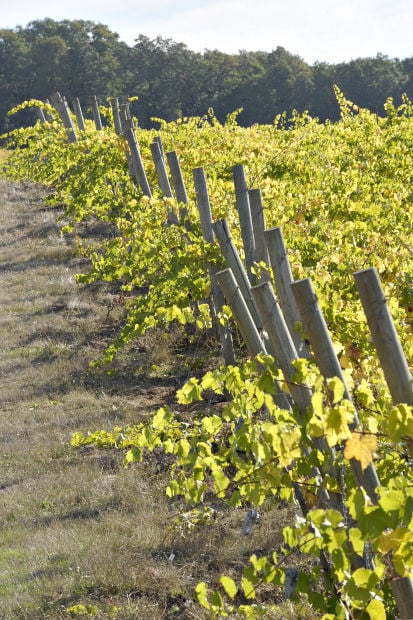 Morning light on the vines at Emerson Vineyards near Monmouth. 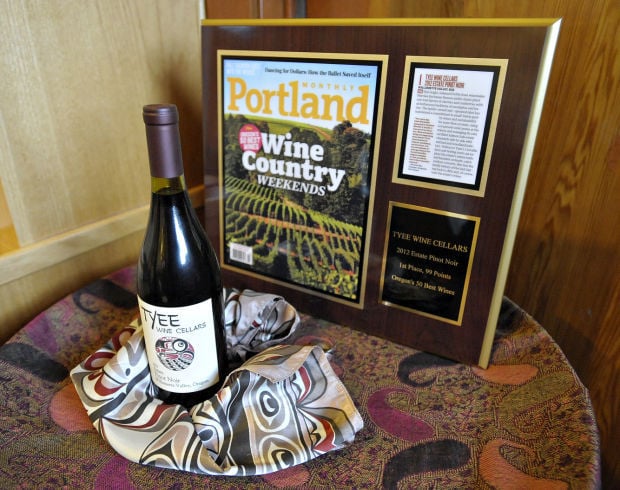 Tyee Wine Cellars' 2012 Estate Pinot Noir was named the best wine in the state by Portland Monthly magazine. Tyee is also one of half a dozen mid-valley labels that won gold in this year's Oregon Wine Awards. 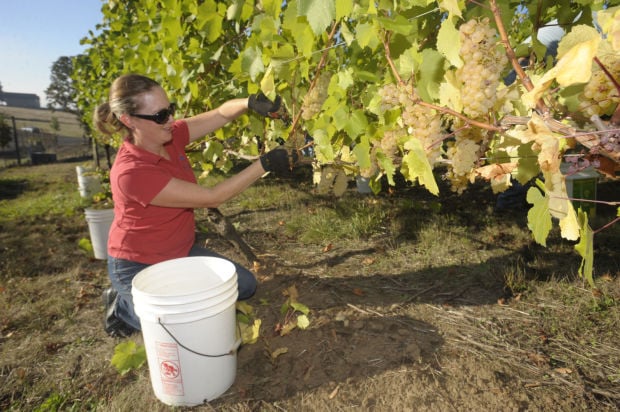 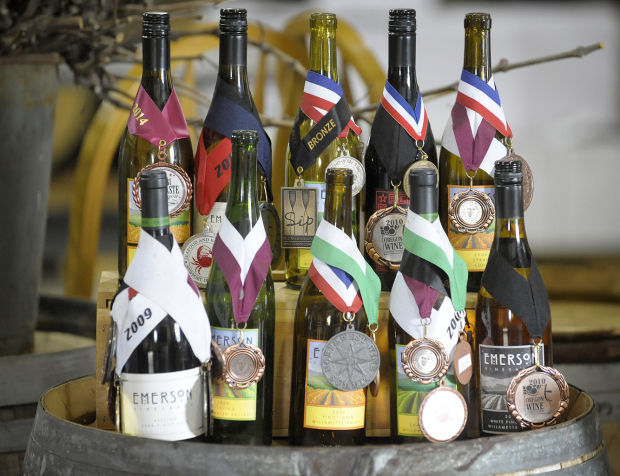 A selection of award-winning wines from Emerson Vineyards. 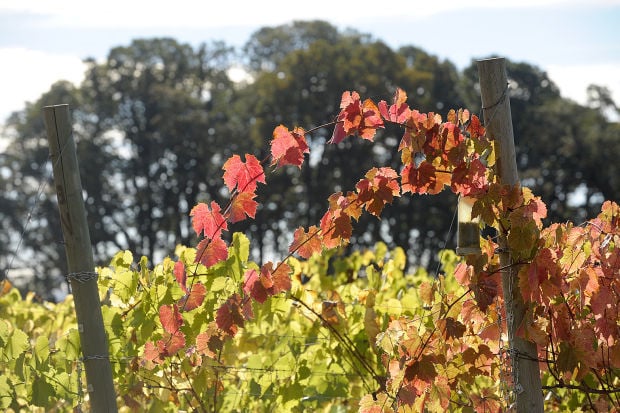 Morning light on the vines at Emerson Vineyards in Polk County during harvest this fall. 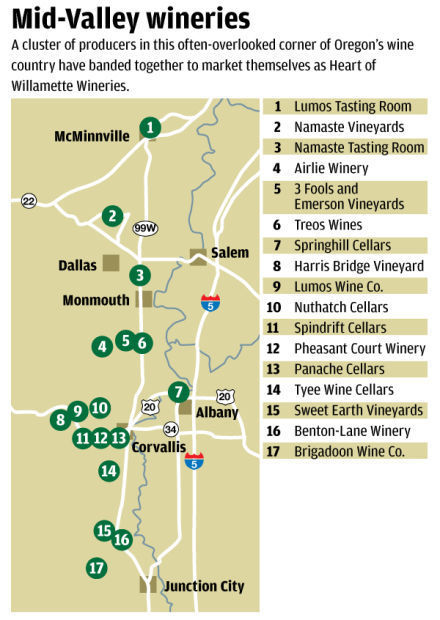 Devotees of the Willamette Valley’s world-class pinot noirs and other fine wines speak knowingly about subregions such as the Dundee Hills southwest of Portland or the Eola Hills west of Salem.

But nobody’s talking about the mid-valley, the stretch from Monmouth through Corvallis down to Junction City — or, at least, they weren’t.

That may be starting to change, thanks to some excellent showings by local producers in recent competitions and a collaborative effort to build a distinctive identity in the increasingly crowded field of Willamette Valley wineries.

And in last month’s edition of Portland Monthly magazine, two mid-valley bottlings made the list of Oregon’s 50 best wines, chosen through a double-blind taste test of more than 1,000 entries by a panel of experts. Brigadoon’s 2012 Lylee Pinot Noir came in at No. 13, and Tyee did better yet — its 2012 Estate Pinot Noir was named the No. 1 wine in the state.

Panelist Savanna Ray, the manager and wine director of Portland’s RingSide Fish House restaurant, had this to say about Tyee’s top-ranked pinot:

“It’s really well made, it’s nicely balanced, it’s light but intense, it’s got this powerful elegance to it. ... There’s something wonderful happening there.”

Mid-valley winemakers are inclined to agree — and they want to make sure the rest of the state gets the word.

For Merrilee Buchanan Benson, the winemaker and vineyard manager at Tyee Wine Cellars just south of Corvallis, the award was a form of vindication.

“You’re always kind of wondering, do people care? Does anyone appreciate what we’re doing? Yeah, it feels good,” she said.

Her father, Dave Buchanan, who started the winery in 1985 with wife Margy, thinks the recognition is important for the entire area.

“We’re producing local grapes here that are just dynamite, they’re breaking the barriers, but a lot of people don’t know it,” he said.

“It’s time for the mid-Willamette Valley to start blowing their horn a bit.”

That’s the job of Heart of Willamette Wineries, a group of 16 producers from Benton, Lane and Polk counties that have banded together to market the region as a destination for wine lovers. But that can be a tall order in a state that now boasts some 600 wineries.

More than 400 of those are in the Willamette Valley, whose cool, moist climate and sheltering mountain ranges make it well-suited for producing pinot noir, a full-bodied red wine made famous by the great estates of France’s renowned Burgundy region. While Oregon winemaking is still a relatively young enterprise, dating back less than 50 years, the valley has built a worldwide reputation for producing high-quality pinot noirs as well as other cool-climate grape varieties such as pinot gris, chardonnay and riesling.

Most of the valley’s wineries are concentrated in areas near Portland and Salem, and that’s where most of the accolades have gone as well. Some of the credit for that can go to the Willamette Valley Wineries Association, a 200-member trade group with plenty of marketing clout.

But even though the organization claims to represent the entire region, some mid-valley producers think it has a decidedly Portlandcentric tilt.

Tom Johns of Emerson Vineyards near Monmouth used to be a member but broke away to join the Heart of Willamette Wineries, which he currently heads.

“When I used to belong to the Willamette Valley Wineries Association, I got no love,” he lamented. “It’s hard for these small (mid-valley) wineries to get recognition.”

The group has a professional, user-friendly website (heartofwillamette.com) and has been working with Visit Corvallis to promote its members as tourism attractions. The campaign appears to be paying dividends. Johns said his tasting room traffic is up 35 percent over last year, and he’s getting a lot more visitors from the all-important Portland market.

Johns sees that as a sign that the mid-valley is starting to carve out its own niche, branding itself as the home of small, unpretentious wineries in off-the-beaten-track locales, where visitors can chat with the owner over a friendly glass of pinot or chardonnay while picking up a few bottles to take home.

“We don’t have the snooty tasting rooms and the high tasting fees, and our wines are cheaper than everybody else’s. When you come up here this weekend or next weekend (Thanksgiving is prime time for tasting room visits and bottle sales at all Willamette Valley wineries), you won’t have to stand in line,” he said.

“We’re trying to say in the backroads of Oregon there’s some really great wineries, and we’re trying to get people to take a drive.”

Tabitha Compton of Spindrift Cellars in Philomath, another Heart of Willamette member, seconds that opinion.

“We’re like this little hidden gem. A lot of times when people come they get the owners in the winery,” she said.

“That’s why we started our winery in the Corvallis area. We knew this was going to be an up-and-coming area (but) we’re not pretentious, we’re down-to-earth.”

What’s in a name?

But Cole Danehower, a longtime Oregon wine writer and marketing consultant, thinks it will take more than a passion for pinot and a homespun, mom-and-pop image to make mid-valley wineries stand out from the crowd.

The vast majority of Oregon wineries, he pointed out, are small operations, and it’s not uncommon to have personal contact with the owners and winemakers on a tasting room visit. Here in the Willamette Valley, the state’s most famous wine region, the areas around Portland and Salem are better known because they have a higher concentration of wineries that have had time to develop a reputation.

In 1983, the valley as a whole was officially designated an American Viticultural Area, a signal to consumers that it had established itself as a distinctive wine-growing region. In the mid-2000s, six smaller AVAs were established within the valley, all in the Portland and Salem areas.

According to Danehower, being part of an AVA carries some obvious marketing advantages.

“If you say ‘Dundee Hills,’ you don’t have to explain any further,” he said.

But there’s also a downside to being a known quantity, he pointed out, and that can work in the mid-valley’s favor.

“Are there advantages to being part of a lesser-known area or group of wineries? You bet there are,” Danehower argued. “It’s an area to explore. It’s an area for discovery.”

That said, it still behooves mid-valley vintners to craft a unique brand for themselves, he added, one based on high-quality wines that break from tradition in some way.

“It’s a question of the consumer trying to understand what makes a region different, what is the story that a particular winery or a particular region has that makes them different,” Danehower said.

“I don’t know quite what it would be yet because I think the story has yet to be told,” he added. “That’s the issue — and that’s the opportunity.”

The crash didn't happen at the Albany Municipal Airport. When news of the family's claim against the city first broke, it wasn't clear how they thought the city was negligent. Here's what their lawyer says.

Coronavirus infection levels rising in Oregon; Linn in the Top 4

Coronavirus infection levels are rising in Oregon, with Linn County posting some of the highest numbers.

Lebanon High School was placed on lockdown Friday morning, Dec. 3, after officials there learned of a potential threat to the campus. Local la…

The charges stem from two incidents in North Albany.

Watch Now: Should my kid get the COVID vaccine?

Dave Buchanan, co-owner of Tyee Wine Cellars, pours a glass of the winery's award-winning Pinot Noir in the Tyee tasting room on Friday.

Tyee Wine Cellars owners Margy Buchanan, left, Dave Buchanan and Merrilee Buchanan Benson raise a toast with their top-rated Pinot noir. Long overshadowed by the big-name producers in the northern part of the Willamette Valley, Corvallis-area wineries are starting to get some recognition.

Morning light on the vines at Emerson Vineyards near Monmouth.

Tyee Wine Cellars' 2012 Estate Pinot Noir was named the best wine in the state by Portland Monthly magazine. Tyee is also one of half a dozen mid-valley labels that won gold in this year's Oregon Wine Awards.

A selection of award-winning wines from Emerson Vineyards.

Morning light on the vines at Emerson Vineyards in Polk County during harvest this fall.