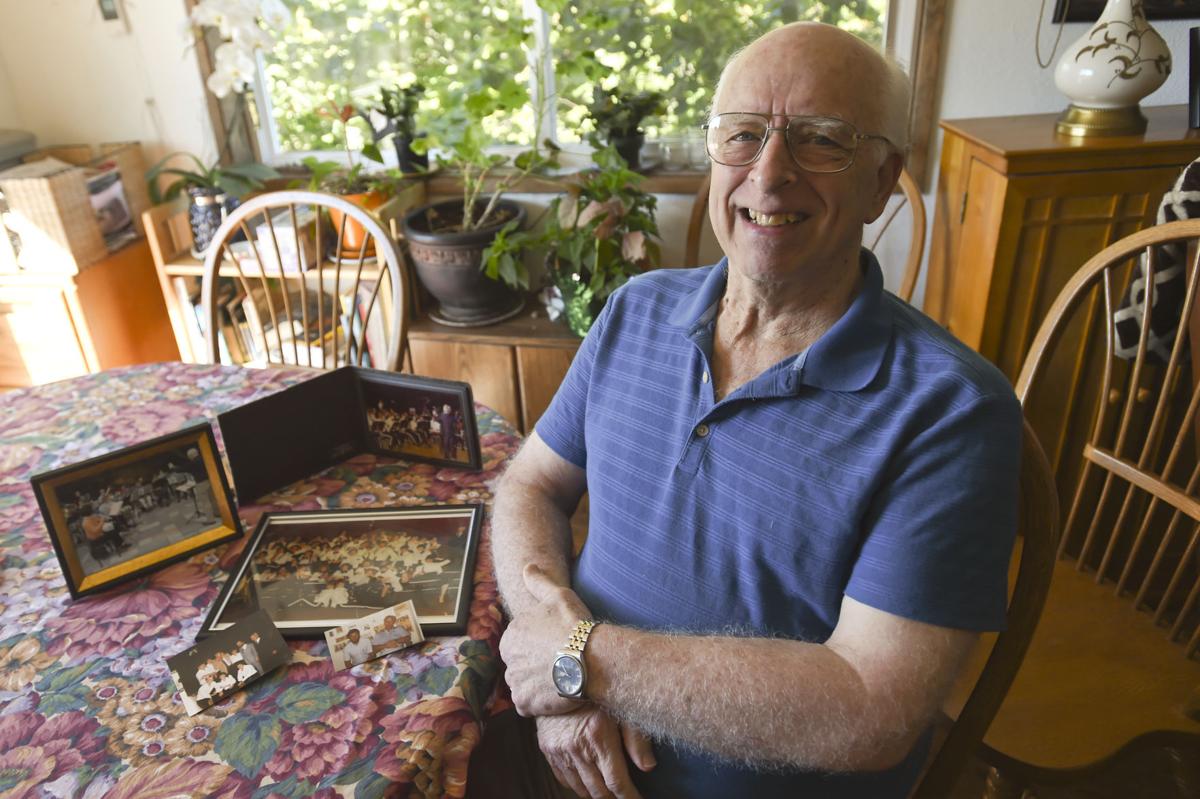 Former West Albany band director Ephraim Hackett will be celebrating his upcoming 82nd birthday with a concert with guest appearances from family and former students. 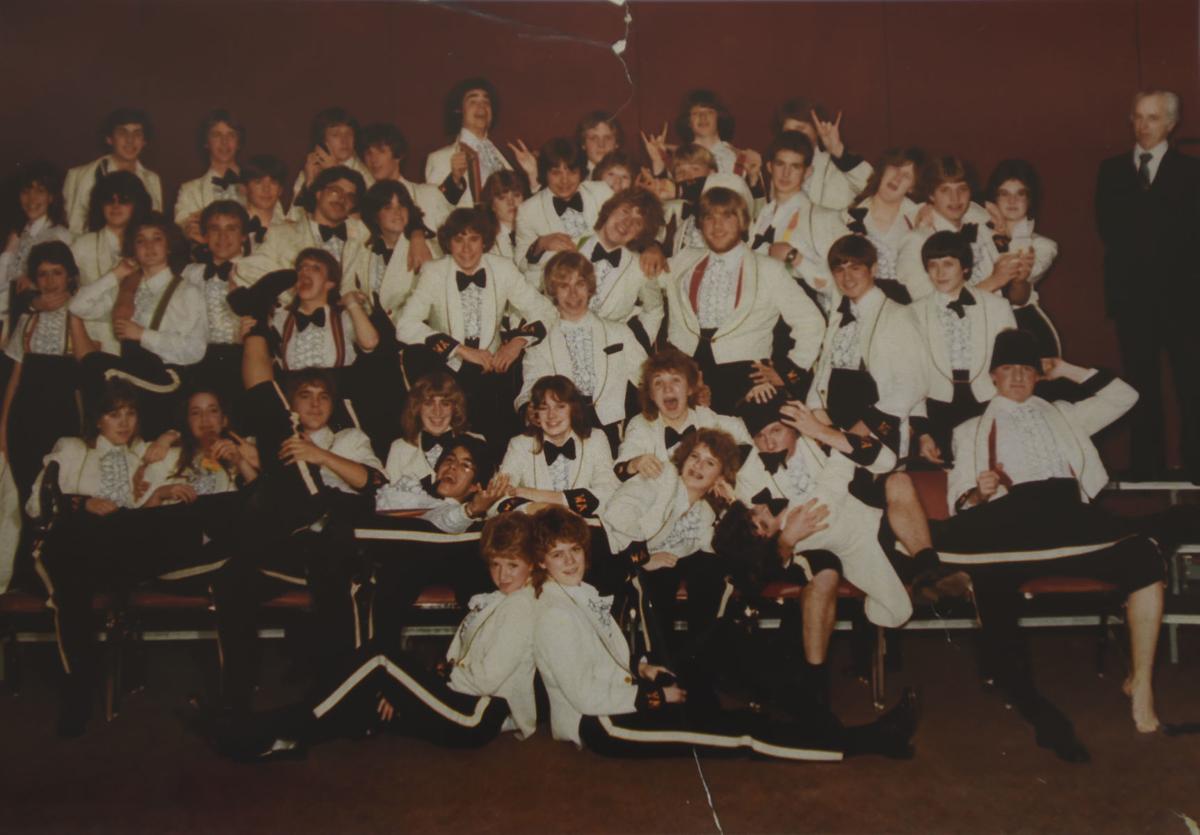 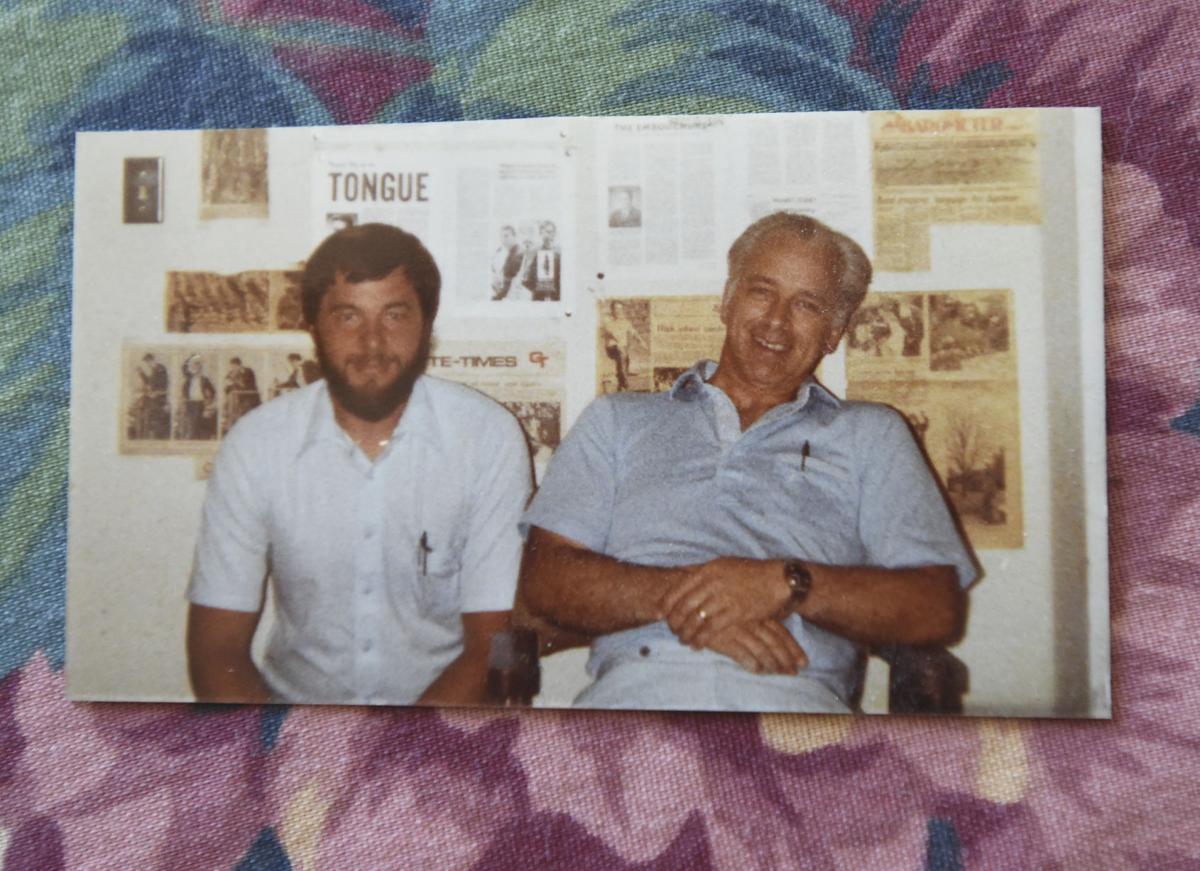 West Albany band director Ephraim Hackett, right, is seen with Scott Janes, who was band director at South Albany High School in the 1980s. Hackett's family is inviting the public, along with friends, faculty and former students, to join them for a birthday concert Oct. 1.

So with Ephraim Hackett, former West Albany High School band director and conductor of the New Horizons Band in Corvallis, turning 82 this October, his family is inviting the public to a birthday concert in his honor.

The concert will be at 2 p.m. Sunday, Oct. 1, at United Presbyterian Church, 330 Fifth Ave. S.W., Albany. It's free, although donations to the church in gratitude for the use of the space are encouraged, said Janet Hackett, Ephraim's daughter and the organizer of the event.

Janet and her brother, Michael Hackett, are on the list of performers. Janet earned performance degrees from the Eastman School of Music and Northwestern University School of Music in Chicago and taught voice for many years at Oregon State University. Michael is a nationally known professional trumpet player and trumpet authority whose CD, "Circles," was released in 2005. He is assistant professor of trumpet and jazz studies at The University of North Carolina at Charlotte.

"We're trying to recruit as many former students, faculty and friends as we can, just to show up and have a little get-together," Janet Hackett said.

Music seemed an unlikely choice for a boy like Ephraim Hackett, growing up in the tiny farm town of Victor, Montana (only about 750 residents as of the 2010 census).

But instruments had long been a part of the family home. Ephraim's mother played piano and his father the fiddle, and Ephraim himself inherited a trumpet that had belonged to his grandfather.

In high school, Ephraim took that trumpet and joined band. The teacher, Newt Buker, was the brother of the man married to his cousin Helen. Ephraim knew he didn't want to follow his father into farming — "I surely did not," he recalled — and playing in the band gave him a new idea for his future.

Missoula, the nearest city to Victor, was an hour's drive away. Hackett's graduating class had just 13 students. "At least half of the school was in band, yeah," he remembered.

"It was not a wonderful place for a band director," he added. "Too small. But I would say the band director had a greater effect on the kids than the other teachers."

The effect on Ephraim Hackett was to inspire him to study music at a higher level. He received a Bachelor of Arts in music education in 1957 from the University of Montana in Missoula and almost immediately landed a job teaching choir in southern Idaho.

He moved from Idaho to teach band in Klamath Falls, returning to Missoula for a six-week summer school program. That's where he met a young opera singer named Sharon Johnson, who sang soprano in the chorus of the Lyric Opera of Chicago.

According to family legend, Janet Hackett said, Sharon's roommate introduced her to Ephraim, who was immediately smitten. Before returning to Klamath Falls and his teaching job, he asked her to marry him. She said she'd think about it.

Ephraim returned to Klamath Falls alone, but received a telephone call not long after he arrived. "Is that offer still open?" Sharon wanted to know. They were married in 1960 in Klamath Falls and were together for the next 49 years, before her death in 2009.

Ephraim Hackett did think about going professional. He and Sharon had planned to return to Illinois so he could study at Northwestern. But then they learned they had a child on the way — the first of four.

"Kids change everything," Janet Hackett said. "So he kept teaching and made a career out of teaching."

Ephraim wasn't sure he could have gone pro anyway — "I didn't have the chops for it," he said with a shrug — and he loved being in a classroom.

After Klamath Falls came Grants Pass, where Ephraim taught junior high and high school band from the mid-1960s until 1977.

The family moved to Iowa for a year after that, so Ephraim could achieve his master's degree at the University of Iowa, and then he was hired at West Albany High School. He taught band for 15 years at both West and Memorial Middle School, retiring in 1994.

All four of the Hackett children studied band under their father, and music was a constant at home.

Ephraim continued to play trumpet himself, forming the Willamette Brass quintet with tubist John Dalen in 1986. In 2003, he and Stuart Curtis organized the New Horizons Band in Corvallis for anyone 30 or older.

"It becomes your life. It absolutely does. No question about it," he said. "Because you work so very hard for so many years to become that level of player. Nothing else that I can think of that compares with it."

A heart attack a few years ago left Ephraim without the physical stamina to keep performing on trumpet, but he still loves to listen: Miles Davis, Louis Armstrong, Doc Severinsen (born in Arlington, Oregon, east of The Dalles, as the family well knows).

And Ephraim especially loves to listen to his family and friends perform, and to share their memories of making music.

Janet Hackett said for Ephraim's 81st birthday last year, what was intended to be a small party with family and friends turned into an impromptu band reunion. "People were so excited to see each other," she said.

This year, she figured she might as well run with the idea from the start. “I thought, gee whiz, why don’t we do a concert?”

Ephraim took his Grants Pass band to Philadelphia and Washington, D.C., in 1976 to perform in the Bicentennial Parade. The students were so deeply affected by the experience that they maintain a Facebook page about it to this day.

“It changed their life. Some of them still have the uniforms they wore in the parade. They brought them to party," Janet said. "We still get messages from people: 'You know, you had a huge impact on my life.'"

Ephraim said he feels the same way about his students, and about the music that shaped them all.

Being a doctor, lawyer or banker are all "wonderful careers and occupations," he said. "But music starts when you're just a little kid. And it follows you all your life."

"Somehow, it becomes the center of your life."

The public is invited to join friends, family, faculty and former students of Ephraim Hackett for a concert and birthday party at 2 p.m. Sunday, Oct. 1.

The concert will be at the United Presbyterian Church, 330 Fifth Ave. S.W., Albany. Admission is free but donations of gratitude for the use of the church are suggested.

Janet Hackett, former voice instructor at Oregon State University, is organizing the event in honor of her father's 82nd birthday, which is Oct. 2. Ephraim Hackett taught band classes for 39 years, 15 of them at West Albany High School and Memorial Middle School, and co-founded both the Willamette Brass Quintet and the New Horizons Band in Corvallis.

Visitors are asked to bring “themselves, their happiness and their memories of band," Janet Hackett said.

Former West Albany band director Ephraim Hackett will be celebrating his upcoming 82nd birthday with a concert with guest appearances from family and former students.

West Albany band director Ephraim Hackett, right, is seen with Scott Janes, who was band director at South Albany High School in the 1980s. Hackett's family is inviting the public, along with friends, faculty and former students, to join them for a birthday concert Oct. 1.