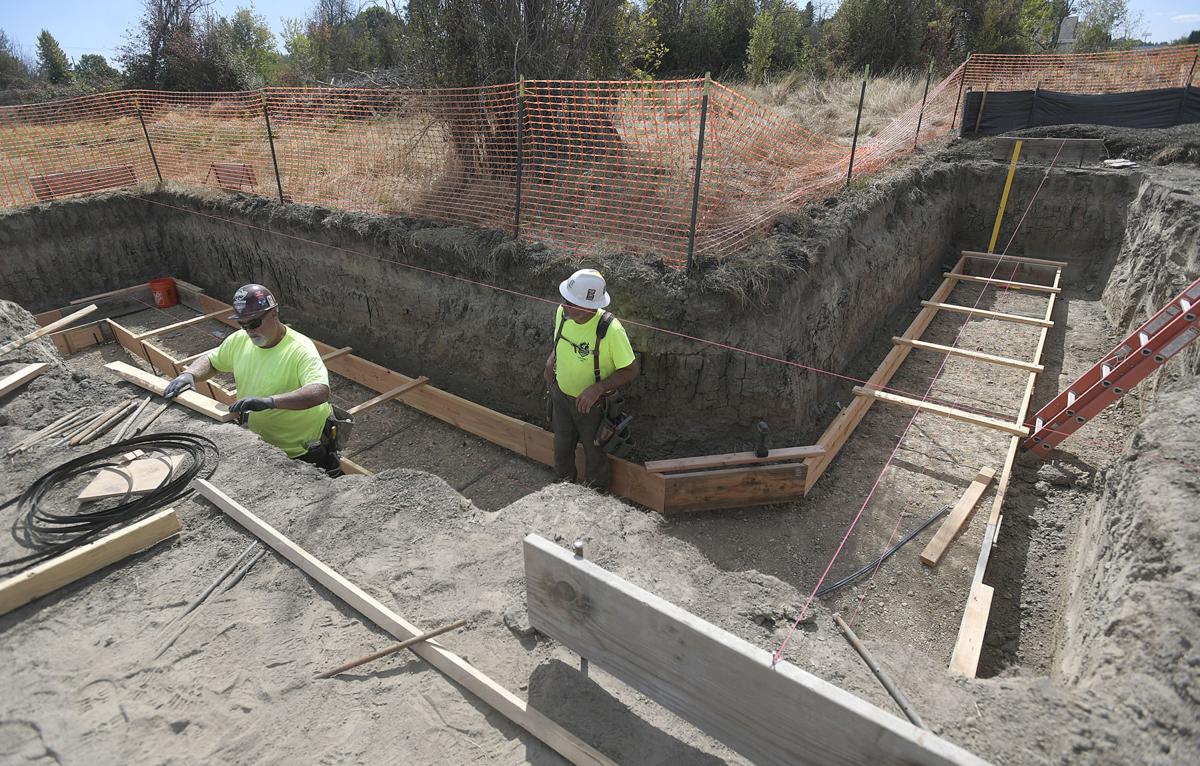 Bryan Goss of Sweet Home, left, and Brent Dozler of Stayton work on a retaining wall for a pond at the Greater Albany Public School's new transportation center site. 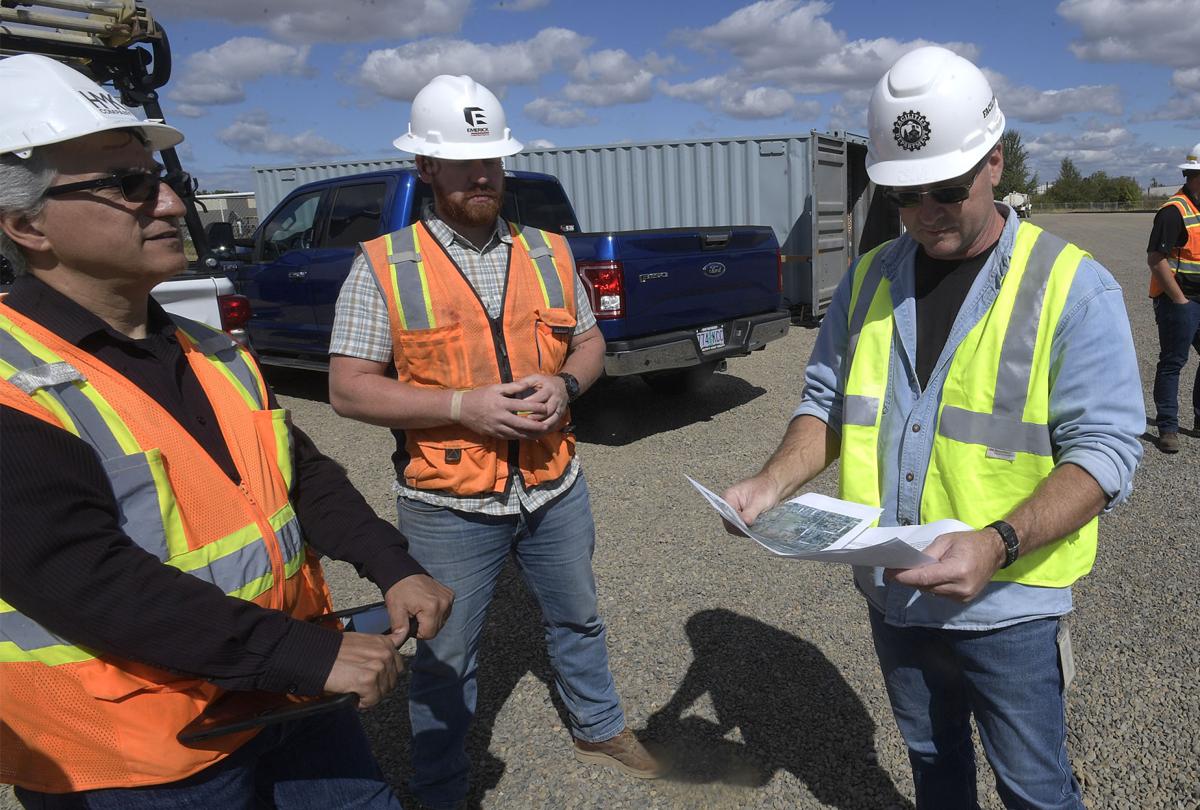 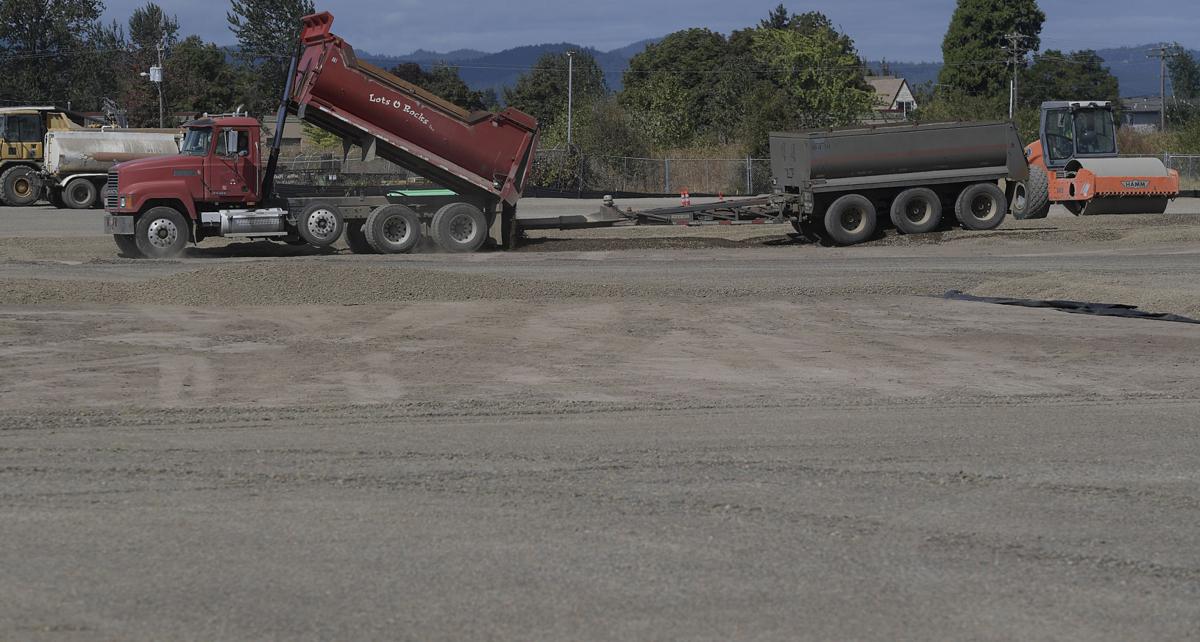 A truck spreads rock as construction crew prepare the groundwork on the site. 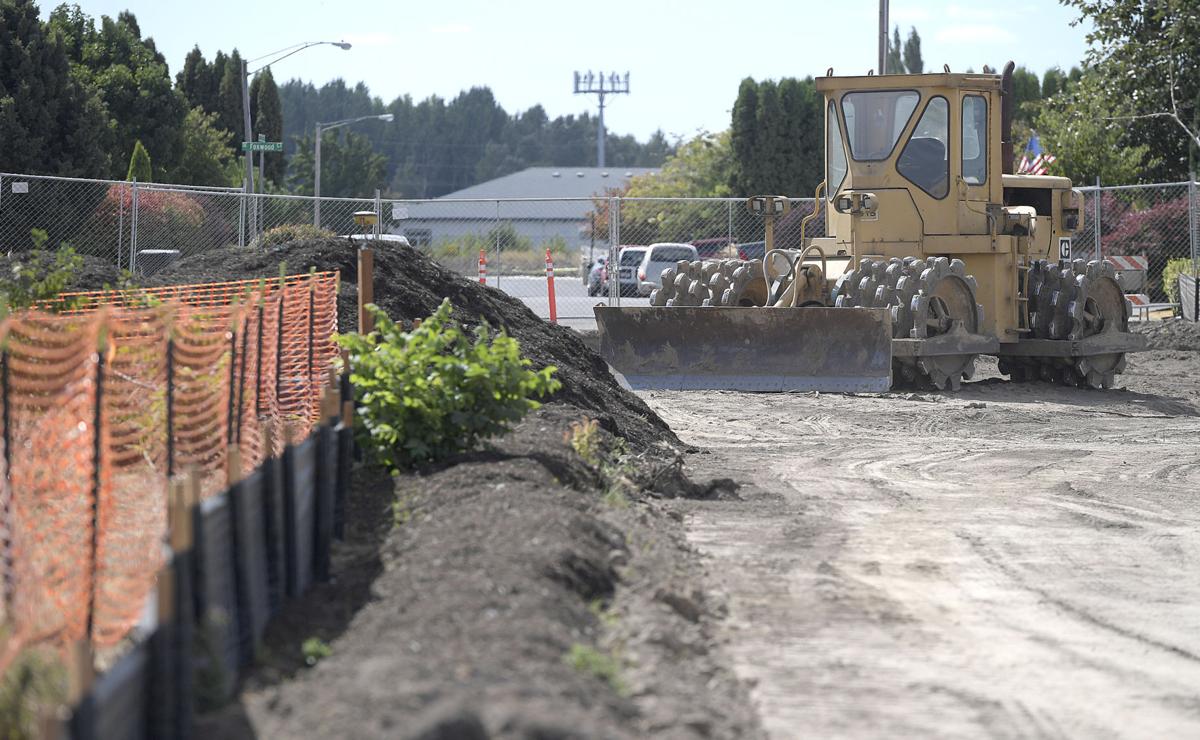 Lyon Street will be extended dissecting the site. The area to the east of the Lyon Street extension will be sold off by GAPS.

Cindy Moran can't wait to come out of the supply closet.

The transportation supervisor for Greater Albany Public Schools is currently sharing the transportation center's storage space with the operations supervisor as an office because it's the only place big enough for desks to be 6 feet apart, minimizing potential contact in the age of the novel coronavirus.

All the center's office staff have moved upstairs, which was the bus garage's training room, so desks could spread out. But when the school district finally finishes its new transportation center — scheduled for next year — there will be plenty of room to grow.

After more than a decade of planning, the new transportation center is taking shape on property the district owns at 2485 S.W. Ferry St.

Crews have brought in dozens of truckloads of rock, dug out a detention pond for stormwater runoff and will soon be putting in the wiring and plumbing for a 43,000-square-foot pre-engineered metal building.

"We're hoping to have buses roll out of here in the fall of '22," said Skip Hamilton of HMK Company, the senior project manager.

The district has 80 buses and 11 vans on site, compared to 50 buses and two vans when Moran started 25 years ago.

"We also have over 80 employees trying to find a parking place on our very small lot," she said. "It will be very nice to have everyone be able to park on site."

A new center will mean everyone can sit in the same room for meetings, and space will be available for small group trainings, she said. It will mean an open space large enough to set up cones for bus drivers to use for reference point training, instead of having to drive to the parking lots at the Linn County Fair & Expo Center or Linn-Benton Community College.

The best part: a space for maintenance. Right now, mechanics do repairs in the parking lot in all weather, Moran said. "The addition of a couple more bays with lifts and updated equipment will make their jobs much more efficient."

The overall approved project budget is $15.6 million. The district has a loan for the up front payment and expects to be reimbursed for 70% of the cost through federal transportation dollars from the Oregon Department of Education, district officials said.

The rest will come from the sale of the old transportation center at 235 13th Ave., as well as the sale of a 3-acre chunk of the Ferry Street property that isn't needed for the new center. Offers for the Ferry Street property must be $500,000 at minimum and must be received by 2 p.m. Sept. 12. More details can be found at https://albany.k12.or.us/district/business/surplusproperty.

The current GAPS transportation center was built in 1966 and has long outgrown its space, Pigman said.

At 55 years old, the building has floors that have sunk as the concrete settled over time, and cracks have appeared in its cinder block walls. Carpenters have to keep caulking the cracks on the restroom walls so people can't see through them, Pigman said.

"There are some fairly significant issues with the building," he said. Continual repair work "doesn't make fiscal sense."

The Ferry Street property has long been the planned spot for a new facility, but it was landlocked. A few years ago, however, Gary Dahlquist, the facilities foreman, got to talking with the person who owned adjacent property and was considering development. Dahlquist connected him with Russ Allen, then the GAPS business director, and they worked out a deal for a right of way.

Buses will enter the site off Ferry, although there will be an emergency exit to Lyon Street. Lyon will be extended to allow access to the 3-acre site GAPS is selling.

The project hasn't encountered any major difficulties so far. Metal buildings are in high demand, which caused scheduling issues at first, but the building coming from Pacific Building Systems out of Woodburn is confirmed to be here in February, Hamilton said.

Crews also found an abandoned well that wasn't documented, but it's been recorded, capped and decommissioned.

Moran said employees have done the best they could with the old building for as long as they could.

"I am so grateful we are finally going to be able to have room to grow as Albany continues to grow around us," she said.

Germaine Joseph-Hays, assistant principal of Corvallis High School, is one of 66 educators selected nationwide for the Fulbright Teachers for …

Bryan Goss of Sweet Home, left, and Brent Dozler of Stayton work on a retaining wall for a pond at the Greater Albany Public School's new transportation center site.

A truck spreads rock as construction crew prepare the groundwork on the site.

Lyon Street will be extended dissecting the site. The area to the east of the Lyon Street extension will be sold off by GAPS.