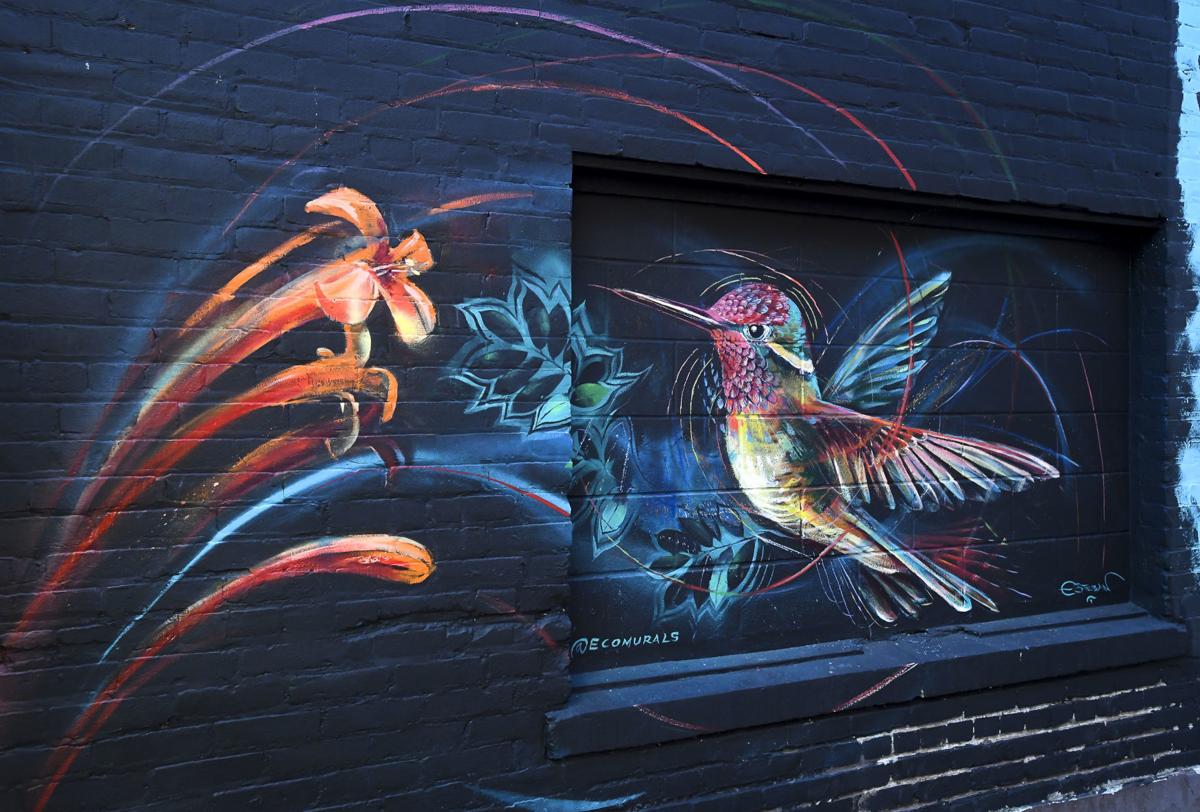 "Hummingjewel," by Esteban Camacho Steffensen, is one of the latest additions to the growing collection of murals in Corvallis. 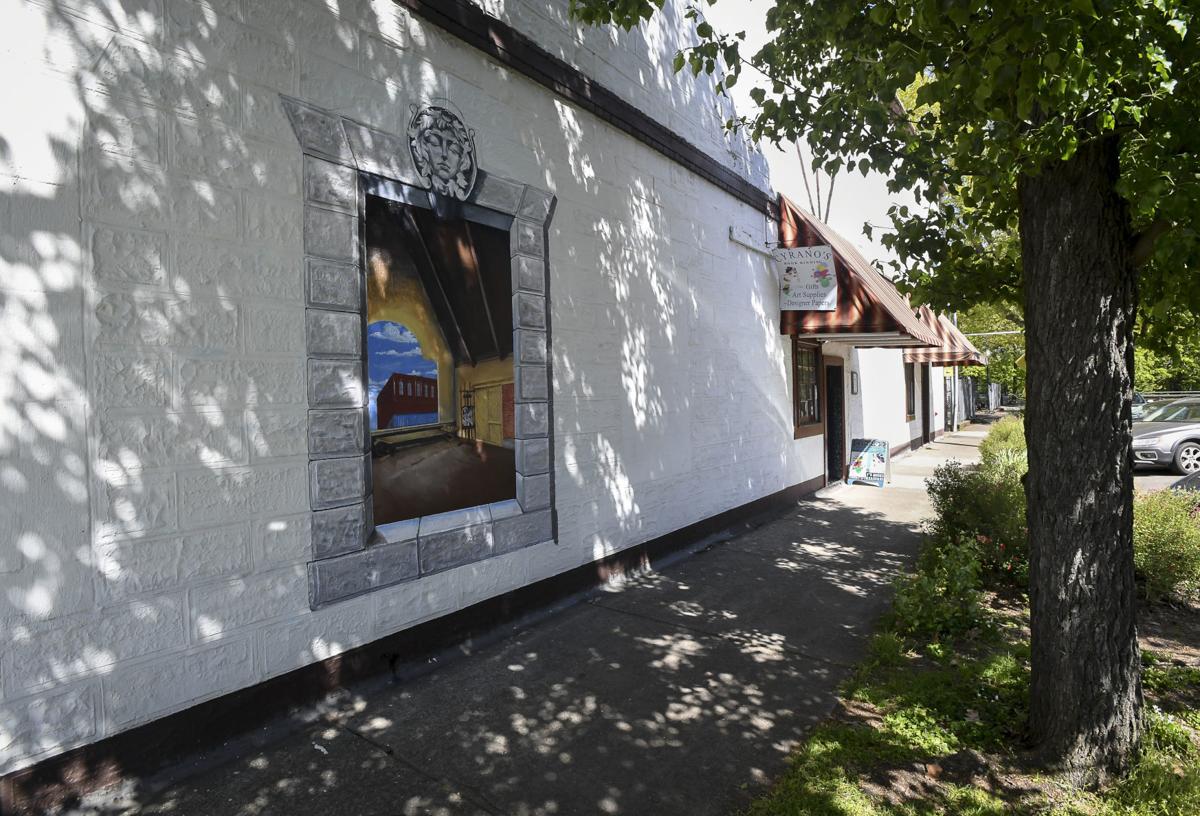 Local artist Dan Hitchcock is still putting the finishing touches on this mural on the south side of the Old World Deli. He and his wife, Mae, have created several trompe l'oeil murals on the downtown building. 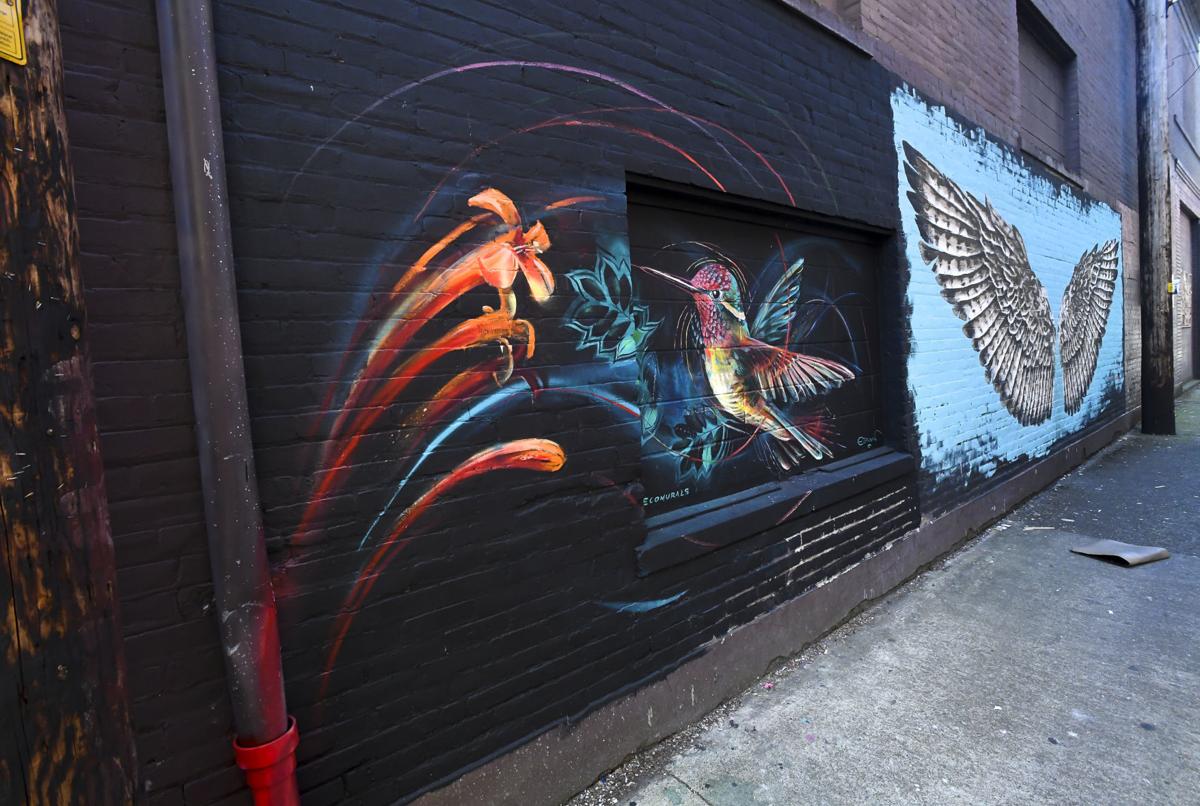 "Hummingjewel," left, and "Take Flight" are among half a dozen outdoor wall paintings in "Art Alley," which runs between Second and Third streets south of Madison Avenue.

Corvallis has some fresh paint.

“Hummingjewel,” by Esteban Camacho Steffensen, covers a bricked-up window and part of a wall on the side of the Madison Square building at 260 SW Madison Ave.

Roughly 10 feet wide and 8 feet high, the mural is painted in vibrant jewel tones on a black background and depicts a multicolored hummingbird hovering before a spray of lush red flowers, with swirling lines creating a sense of movement around its beating wings.

The second mural, by Dan and Mae Hitchcock, can be found on the south wall of the Old World Deli at 341 SW Second St. Like other murals the Hitchcocks have created on the same building, it’s done in a trompe l’oeil (“trick the eye”) style that tends to make viewers do a double-take.

“I like that fakeout stuff,” said Dan Hitchcock, who added that he’s still putting the finishing touches on his latest project.

The untitled mural, about 10 feet high by 8 feet wide, resembles a large window framed by stone blocks that looks into what appears to be a high-ceilinged room with an easel holding a black and white painting of a skeleton holding a bouquet of flowers. The room in the mural has a large window of its own, which appears to provide a view of the red brick building that houses Corvallis Cyclery, across Second Street from the deli.

Hitchcock said the scene is inspired by the painter N.C. Wyeth’s studio, and the miniature painting is a replica of a work by Southern California artist Jesus Cruz Jr.

Both Steffensen and the Hitchcocks have painted a number of murals around Corvallis, which now boasts some three dozen or so scattered around the city.

Many of them are downtown, with the greatest concentration to be found in “Art Alley,” where “Hummingjewel” just went up. The short, narrow thoroughfare, which cuts between Second and Third streets just south of Madison Avenue, is now decorated with half a dozen murals.

The alley is home to “Take Flight,” by Alice Marshall, a disembodied set of hawk’s wings that has become a popular backdrop for selfies, as well as Sage Zaharodni’s “Mountain Sunset”; “Crow in Totality,” by Vela; and a stenciled silhouette of Batman painted by an unknown artist.

On either side of the alley’s mouth are two earlier installations from the Alley Art project led by the Madison Avenue Task Force, a framed poem titled “To September” by Donna Henderson and a glazed clay bas relief titled “Madison Avenue,” a patchwork of images by members of the Willamette Ceramics Guild.

For Jennifer Moreland, Downtown Corvallis Association executive director, it all adds up to a colorful calling card for the city.

“The murals are getting a lot of attention,” said Moreland, noting that the wings in Art Alley have been featured in an advertising campaign promoting Corvallis as a hot spot for the visual arts.

“It’s a destination now,” she added.

Moreland has been involved in the creation of a number of the city’s large-scale wall paintings through the Corvallis Mural Project, which she launched in 2016 after being inspired by the street art scene in Los Angeles.

She plays the role of matchmaker, securing permission from property owners to use their walls as a blank canvas, lining up artists and rounding up sponsorship money.

“Hummingjewel,” which was sponsored by the DCA, is the latest addition to the project’s collection of outdoor art.

And still more murals are on the way.

According to Moreland, Steffensen is getting ready to paint a scene on the wall of the Heartland Humane Society Thrift Shop at 411 SW Third St.

Marnie Ernst Zoa, who helped produce a pair of colorful murals at Jefferson Plaza, 301 SW Fourth St., has two more in the works, Moreland added. One is going up at Spaeth Lumber, 1585 NW Ninth St., and the other is planned for the pedestrian underpass beneath the Harrison Boulevard Bridge.

Dan Hitchcock, too, expects to be painting more murals soon. He’s in discussions with the owners of the Pastega Coffee Service building at 244 NW Second St. and the Shirt Circuit building at 1411 NW Ninth St.

Beyond that, though, he’s constantly on the hunt for more potential mural sites.

“I have a lot of irons in the fire,” he said. “I’m always looking for the walls.”

Moreland believes the recent explosion of public art in Corvallis is more than mere decoration. In her view, murals not only enrich the community visually, they also pump up the economy by drawing visitors to the city.

“We’re trying to use art as a primary tourism focus for downtown Corvallis to stand out among other cities in Oregon,” she said.

Corvallis is getting a lot more colorful these days, and it’s not just the leaves turning: Everywhere you look, bright splashes of paint are t…

Yeah, but is it art? New murals raise questions about expression and commerce

Colorful murals have been brightening the walls of commercial buildings all over Corvallis in recent months, but in some cases they seem to be…

Mural aims to save the world

Corvallis’ latest mural is more than just a pretty picture — it’s a call to action.

Corvallis will host the Oregon Senior Games this August, and the sporting event is expected to bring about 500 participating athletes, said Mo…

The murals just keep on coming in Corvallis.

"Hummingjewel," by Esteban Camacho Steffensen, is one of the latest additions to the growing collection of murals in Corvallis.

Local artist Dan Hitchcock is still putting the finishing touches on this mural on the south side of the Old World Deli. He and his wife, Mae, have created several trompe l'oeil murals on the downtown building.

"Hummingjewel," left, and "Take Flight" are among half a dozen outdoor wall paintings in "Art Alley," which runs between Second and Third streets south of Madison Avenue.