Beavers return to OSU campus for first day of school 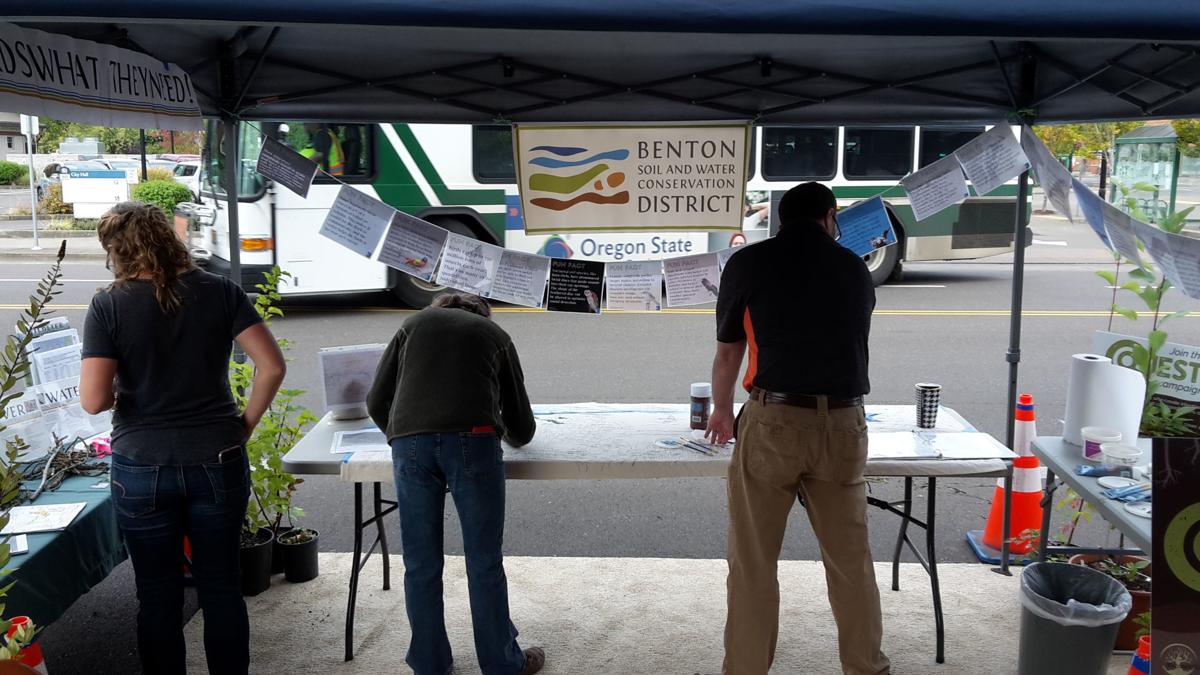 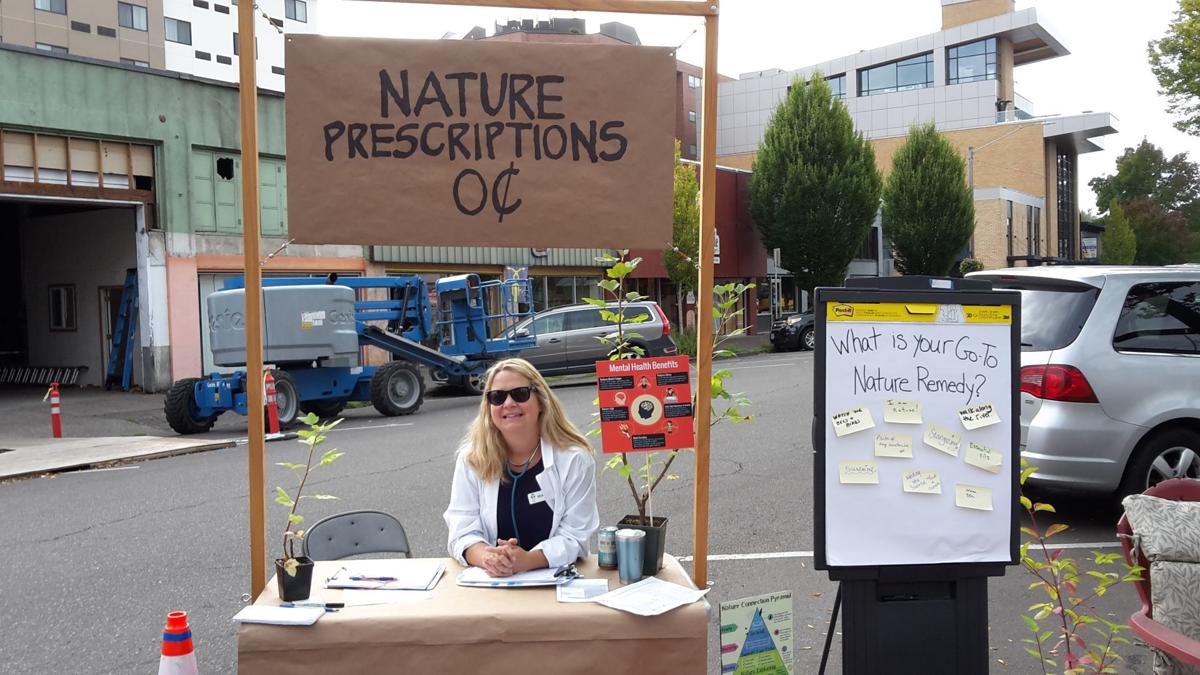 Michel Wiman of the Institute for Applied Ecology staffs the "Peanuts"-themed booth on Second Street on Friday. She asked for participants to look at ways to improve health and well-being naturally, particularly by getting outside. 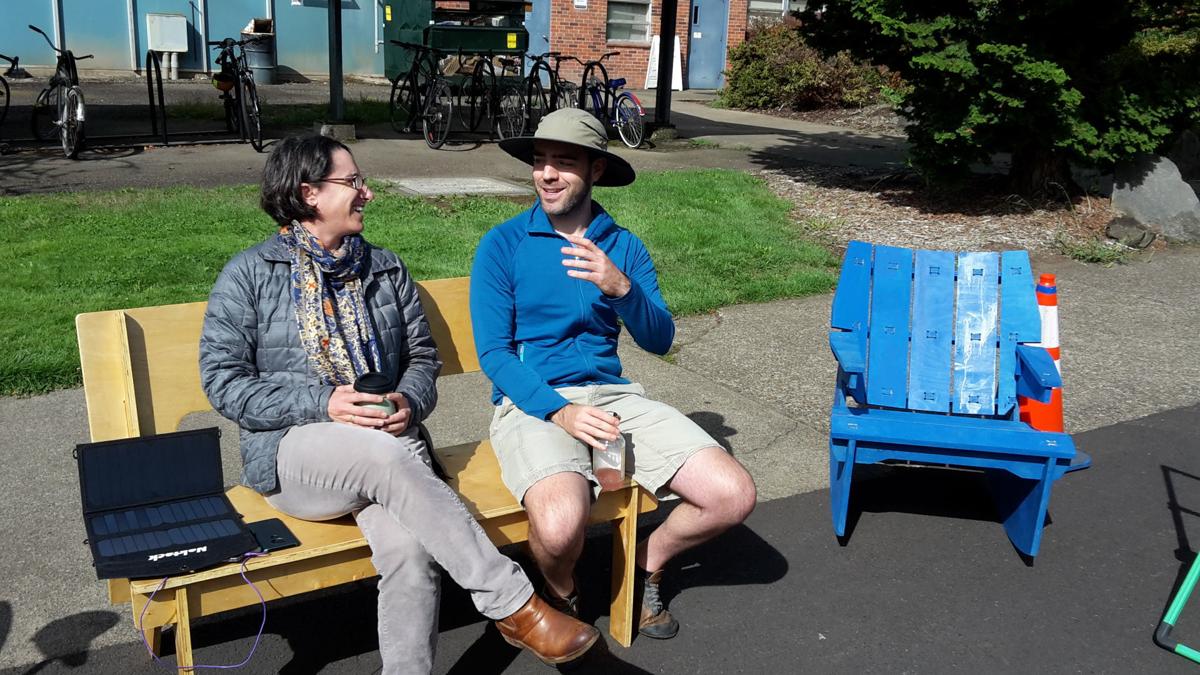 The second rendition of International PARK(ing) Day in Corvallis got going early Friday, with the slot outside the Benton Soil and Water Conservation District opening at 9 a.m. on Fifth Street.

For those new to the concept, PARK(ing) Day seeks to change the way individuals feel about public spaces and parking spaces by using them in different ways.

Last year, activists set down turf and benches and lawn games in a parking spot on Second Street downtown. This year they got a bit more ambitious and staged events at six spots.

Which brings us back to Fifth Street.

The theme at this stop was native birds and plants, with participants invited to help paint a mural that the Benton County Soil and Water Conservation District will use as part of its outreach programs.

“We thought it would be a great idea,” said Laura Brown, resource coordinator for the district. “There are parking spaces all around us and a lot of other things that can be done with them.”

Hard at work on the mural were soil health coordinator Teresa Matteson and Patrick Rollens, public information officer for the city of Corvallis.

“I came over here to take a picture for social media and I got roped into painting a bird,” said Rollens, who drew oohs and aahs from Brown and Matteson for the work he did on a cedar waxwing in the mural.

Brown and Matteson decorated their parking space with donated native plants and trimmed the canopy with fun facts about birds. Matteson said that the banner, once it is filled in by PARK(ing) Day participants, would be used by the district for the next two days.

Then it was on to Second Street near Adams Avenue and a parking space in front of the under-construction Confluence Building, which by 2021 will house the Benton Soil and Water Conservation District, the Corvallis Environmental Center, Cascade Pacific, the Institute for Applied Ecology and the Greenbelt Land Trust.

On hand for the early shift was Michel Wiman of the Institute for Applied Ecology. The other groups had signed up for later shifts. The theme of the space was natural remedies, with Wiman encouraging participants to fill out cards with their solutions and stick them to a poster board.

Among the suggestions were to watch the bees and birds, walk along the river, drink green tea, use essential oils and watch the sunrise without a camera.

“Getting out of the office is really healthy for people,” Wiman said. “Walking, hiking getting out on the water. There are great health benefits and it doesn’t cost a cent.”

Wiman’s booth included tea and grapes and was designed to mimic the psychiatric booth staffed by Lucy in the "Peanuts" comic strip, with the sign saying “Natural Prescriptions 0 cents.”

“We really got the Charles Schulz lettering down,” Wiman said, “but it’s so temporary and ephemeral I hope no one comes after us” for copyright infringement.

Oregon State University was our final stop, where a parking spot had been occupied on Southwest Benton Place in a high-travel corridor with the Kerr Administration Building and the McAlexander Fieldhouse across the street and the pinging of bats audible from the batting cage at Goss Stadium.

On hand was Sylvan Hoover, a doctoral student in industrial engineering, who was representing the transportation action team of the Corvallis Sustainability Coalition.

Hoover disassembled some outdoor furniture from Better Blocks, stowed it in the cargo area of his custom electric bike and drove the whole kit and caboodle to campus. A ladder-toss game also was available.

While the Gazette-Times was present Hoover was visited by Amira Smith of OSU’s sustainability office and Sarah Bronstein, an OSU transportation options supervisor as well as a member of the city’s Bicycle and Pedestrian Advisory Board.

During the general discussion that followed Brownstein noted that the word “parking” got its start with parks being paved over to park vehicles.

“Transportation plans tend to be intuitive,” he said. “We need to apply data science methods.”

Hoover also was a fountain of information, noting that parked cars are empty the vast majority of the time and that “parking is the core element of transportation at OSU even though a lot of people live close enough to use other options.”

Anecdotally, Hoover also noted that his faculty adviser comes to campus an hour early each day to make sure he can get the parking spot he wants.

PARK(ing) Day also was celebrated outside the downtown Starbucks, at the First Alternative-Coop north store and at the Corvallis Bicycle Collective.

Corvallis has a chat about parking

A wise man once said Corvallis is French for “no place to park.”

Michel Wiman of the Institute for Applied Ecology staffs the "Peanuts"-themed booth on Second Street on Friday. She asked for participants to look at ways to improve health and well-being naturally, particularly by getting outside.