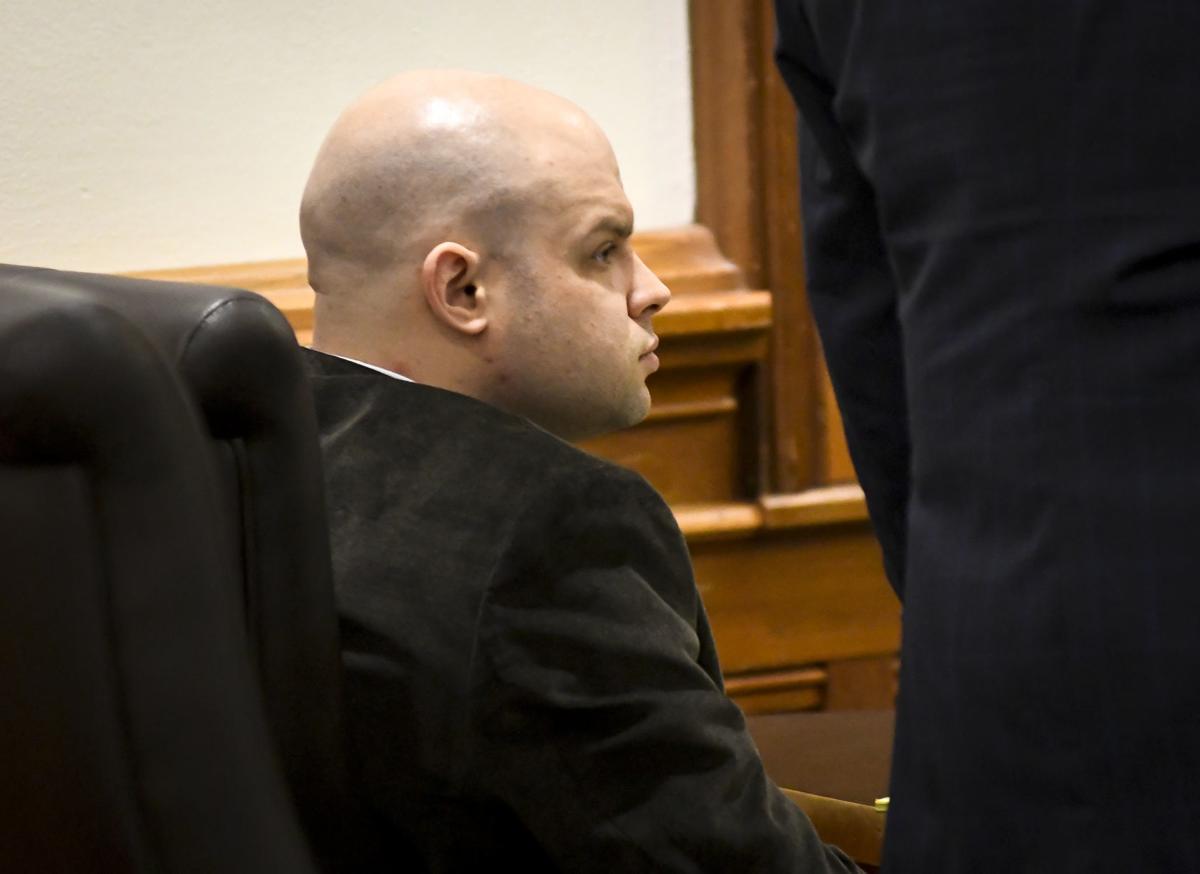 William Chase Hargrove, accused in the murder of Anna Repkina, listens in court on Monday as his attorney, Mike Flinn, speaks. 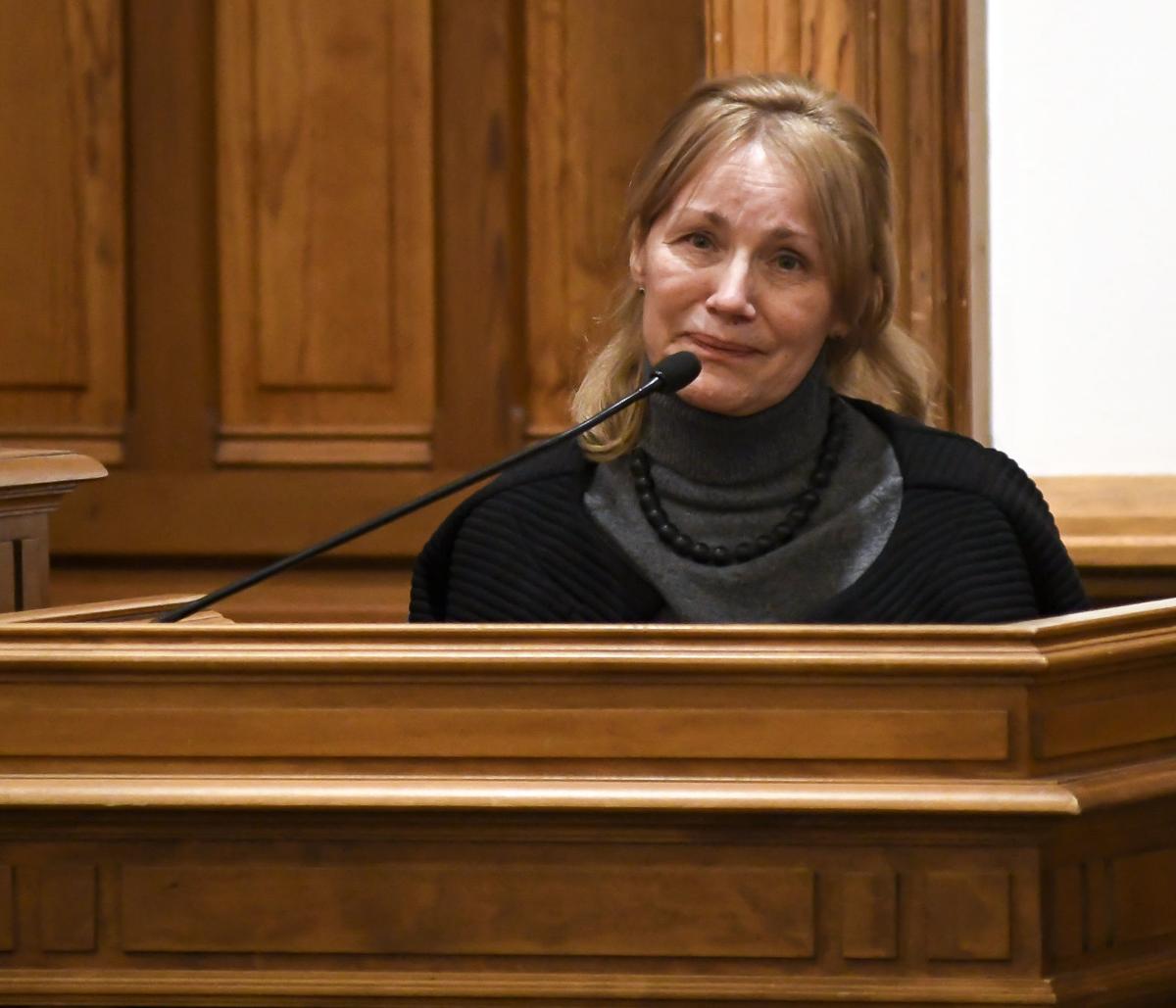 Anna Repkina's mother, Yelena, testifies Monday in the trial of William Hargrove, who is charged with murder in Repkina's death. The dead woman's mother was back in court on Tuesday, when jurors were shown photos from the crime scene. 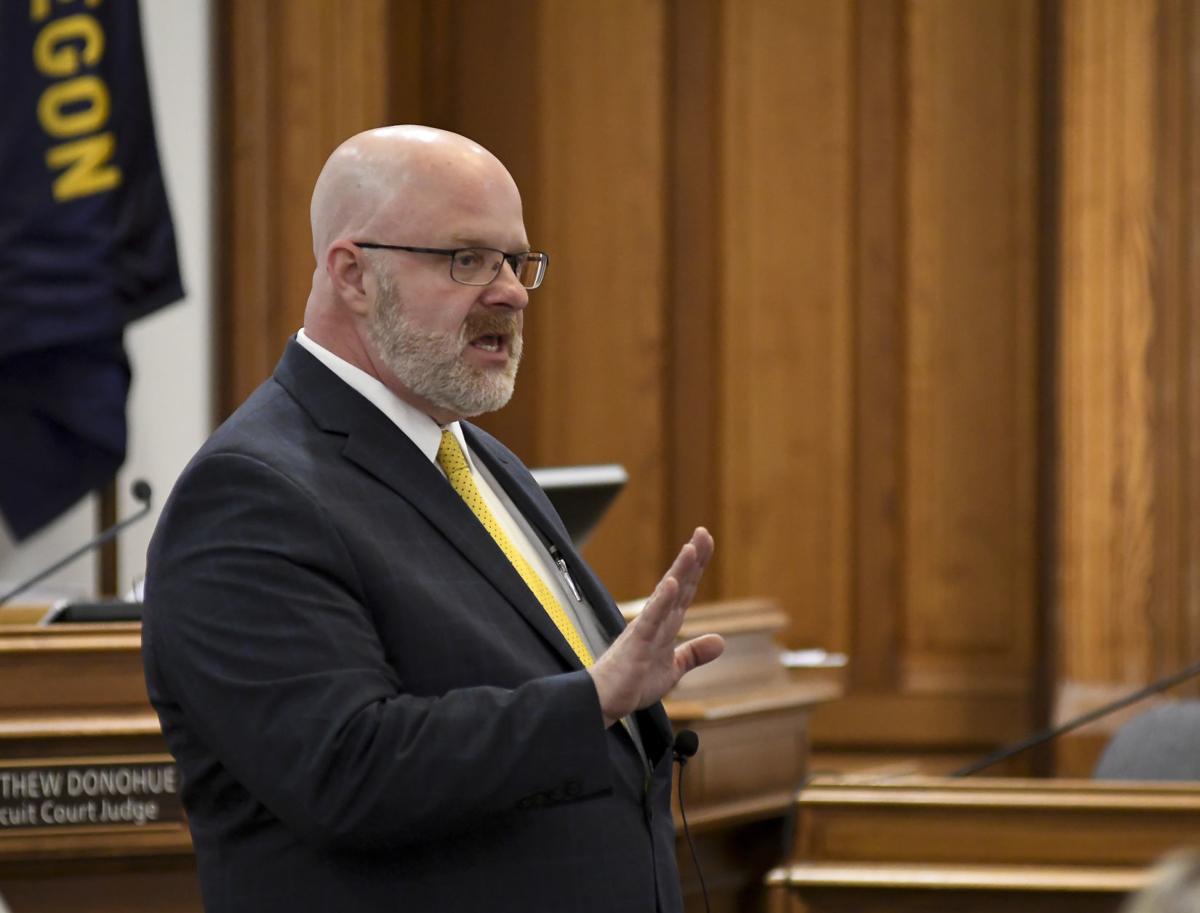 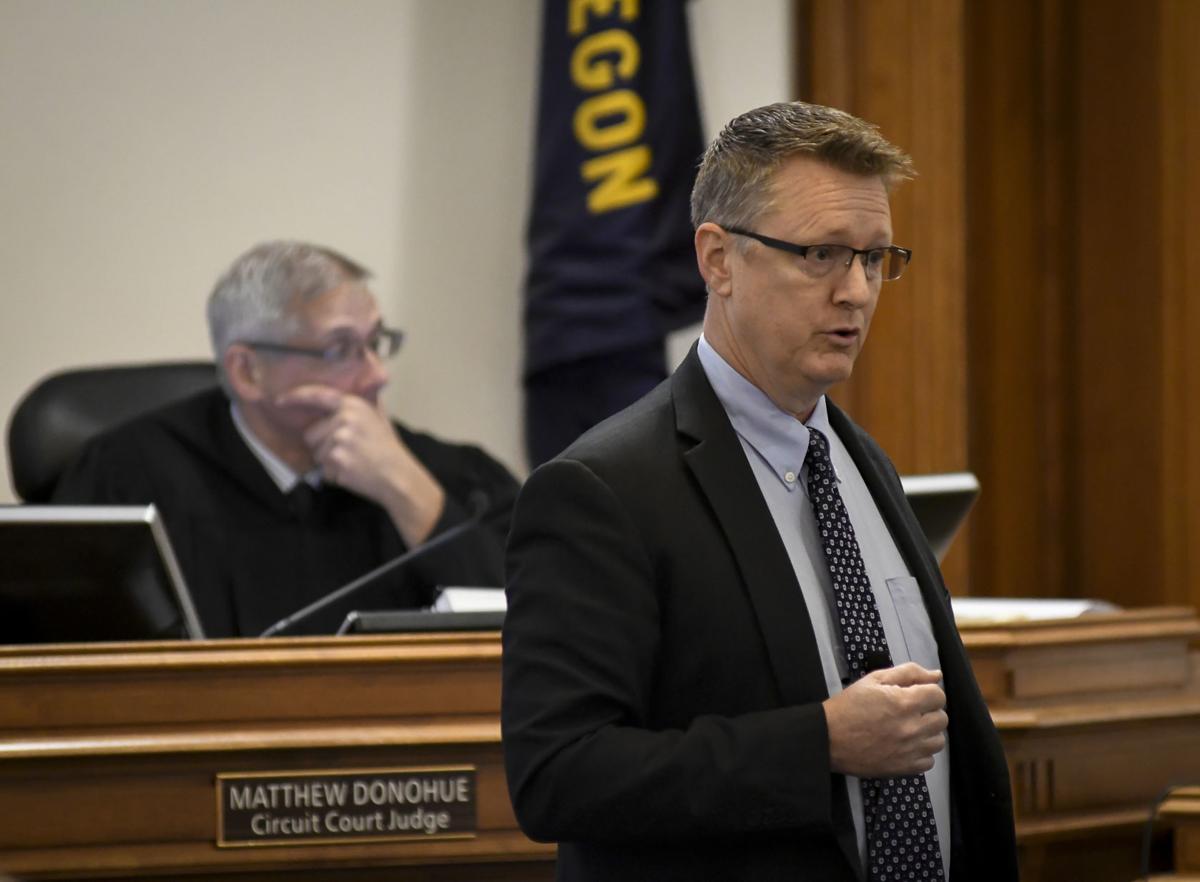 In one version of events Anna Repkina moved to the United States from Russia and was murdered by her fiancé, William Hargrove, to please his married lover.

In the other, it was the other woman, Michelle Chavez, who pulled the trigger of the shotgun that killed Repkina alongside a logging road near Alsea.

Both theories of the April 2017 killing of Repkina were presented in Benton County Circuit Court Monday during opening arguments in Hargrove’s trial. Hargrove, now 29, is accused of the murder of Repkina, as well as related charges of identity theft and two counts of second-degree theft, for allegedly taking Repkina’s bank card after her death and using it to take money from her account.

Ryan Joslin, chief deputy district attorney for Benton County, presented the overview of the state’s case in an opening statement that lasted about 90 minutes.

He said that on March 1, 2017, Repkina, then 27, moved to the United States to start a new life as Hargrove’s wife, but didn’t know Hargrove, whom she had met online, also had an ongoing sexual relationship with Chavez. Chavez was letting Hargrove live in the house she shared with her husband and two children.

“Ms. Chavez knew about her, though, and tried to convince Mr. Hargrove to chose her over Anna and send Anna away,” Joslin said.

Joslin said while Chavez and Hargrove allowed each other to have other sexual partners, Chavez expected Hargrove to be emotionally committed to her and only use other women for sex.

He added that Hargrove played the women off each other, saying to each he was in love with them and casting aspersions on the other: to Chavez, he said Repkina wouldn’t leave and called her foul words; to Repkina, Hargrove said Chavez was his “crazy ex-girlfriend.”

Joslin said Hargrove and Repkina got an apartment together in Corvallis, but Hargrove still spent some nights away with Chavez in Albany, to the point where neighbors worried about Repkina because she never left the apartment and was often left alone.

Joslin said Hargrove and Repkina had planned to marry March 23 at the coast. On the day of the planned wedding she put on her wedding dress and they drove to a Walmart for him to buy rings. While Hargrove went into the store alone to shop, he was on the phone to Chavez telling her he loved her, Joslin said. After Walmart, the couple drove out to meet some of Hargrove’s friends and an officiant at a park near a lighthouse. However, the park was closed and Hargrove told the attendees the officiant called him and canceled because of illness. Joslin told jurors that there’s no evidence Hargrove actually made these plans with the officiant.

Joslin said the night of the couple’s failed wedding, Hargrove left Repkina in the apartment and never returned.

Joslin said as time passed, the financial pressures of supporting his double life with Chavez and Repkina began to take a toll on Hargrove’s income as an oil change technician at Lassen Chevrolet and Toyota in Albany. He said Chavez, who had financially supported him by giving him a room rent-free and co-signing on his Nissan Xterra, continued to pressure him to end his relationship with Repkina. By mid-April, Joslin said Hargrove was worried about his car getting repossessed because his car insurance was going to be canceled due to lack of payment.

Joslin showed slides of text message conversations between Hargrove and Chavez starting April 15 in which they argued about deadlines: Chavez was supposed to end her marriage to her husband and Hargrove was supposed to “get rid” of Repkina. He also showed business security photos from April 16, the day prosecutors believe Repkina was killed, that he said show Hargrove’s Xterra, on the route to Alsea.

Joslin said at 4:35 p.m. that day cell data places Hargrove at the end of the spur of Follett Road, the location where Repkina’s body was found. Shortly after 5 p.m. he met Chavez and they had sex in his car on a logging road. By 6:45 p.m. Hargrove was spotted on security cameras withdrawing money from Repkina’s account at the Jacksons on Ninth Street in Corvallis. He took more money from her account at a Chase bank and then deposited enough money in his account to pay his car insurance at this own bank and then went out drinking.

The next afternoon Repkina was found dead of a shotgun wound to the back of the head.

He said the jurors may conclude they don’t like Chavez, or that she was involved in covering up the killing, but the forensic evidence doesn’t implicate her and she didn’t want Repkina killed.

“It is the state’s contention that the evidence is conclusive that the defendant committed the crime,” Joslin said.

Hargrove’s attorney, Mike Flinn, presented the summary of the defense theory of the case in about 45 minutes.

Flinn said Chavez was fixated on his client and jealous of Repkina. He said the evidence will show that Hargrove and Repkina were in a romantic relationship and his communications with Chavez were an attempt to placate her.

“He had nothing but love for Repkina,” Flinn said.

Flinn said Hargrove made some bad decisions, but it was Chavez who committed the crime.

He argued that evidence will show Chavez was drinking and left a family gathering to meet Hargrove in Alsea, where she killed Repkina. Flinn said Chavez told Hargrove she has family connections to an outlaw biker gang and used that to intimidate him into being silent about the crime.

Flinn added that Hargrove had Repkina’s permission to use her money, and he took it out of the bank because he was planning to use it to flee the area to get away from Chavez.

He said before his client could run he was confronted by police, who interviewed him and arrested him. Flinn said when his client was interviewed police he was under stress and made a bad decision to lie.

“He lied, badly,” he said. But through four interviews with police, he said, “Michelle Chavez also lied, badly.”

Flinn said Chavez also made statements to a friend in which she alludes in code to killing someone.

“You’re going to find she’s hiding something,” he said of Chavez.

He said the evidence will exonerate his client.

“Be curious and be skeptical when you hear the evidence,” he told the jury.

The day also featured testimony by Yelena Repkina, Anna Repkina’s mother, who spoke through a translator and frequent tears.

She told the jury that in September 2016, she learned her daughter had met Hargrove online and started a romantic relationship with him. Her daughter then went to visit Hargrove over Christmas for a week that year. She said she learned Hargrove had proposed during that trip.

Yelena Repkina said Anna Repkina was born and raised in Moscow and was an office worker before she moved to the United States with the hope of marrying Hargrove. She said her daughter had an active social life and with her older brother did historical reconstruction as a hobby.

She added that she was categorically against her daughter moving so far away after such a short relationship.

“I thought she was rushing things,” she said.

Yelena Repkina said she began to suspect things were off after her daughter moved to Corvallis, but whenever she tried to probe deeper into how her daughter’s life was going, she would say her phone was dying and end the call.

She said she realized something was wrong when Repkina stopped replying to messages. She then began searching for information online and saw one of her daughter’s friends had posted an article in English about Hargrove being arrested for murdering a Russian woman. With the help of a family member fluent in English, she called the Corvallis Police Department and learned it was her daughter.

In the crime scene photos, Anna Repkina lies on her back in a clearing in the forest.

The “other woman” in the William Hargrove murder trial took the stand on Thursday, mapping out the complex tangle of emotional ties she says b…

On the night prosecutors believe Anna Repkina was murdered, the man accused of killing her went drinking at a Corvallis bar, where he appeared…

After less than three hours of deliberation, a 12-person jury found William Hargrove guilty on Friday of killing his fiancée and pilfering her…

William Chase Hargrove was given a life sentence for murder during a hearing in Benton County Circuit Court Thursday morning.

William Chase Hargrove, accused in the murder of Anna Repkina, listens in court on Monday as his attorney, Mike Flinn, speaks.

Anna Repkina's mother, Yelena, testifies Monday in the trial of William Hargrove, who is charged with murder in Repkina's death. The dead woman's mother was back in court on Tuesday, when jurors were shown photos from the crime scene.