Opinions were sharply divided at a town hall meeting at Corvallis High School Tuesday night on whether Benton County should stay in or opt out of a lawsuit seeking $1.4 billion from the state for failing to maximize logging revenues on 650,000 acres of forest trust lands.

The purpose of the event, organized by the Benton County Board of Commissioners, was to gauge public sentiment on the suit filed by Linn County on behalf of 15 counties and dozens of smaller taxing districts that receive revenue from timber harvests on those lands, mostly foreclosed properties deeded to the state for management in the 1930s and 1940s.

Under a 1939 law, the forest trust lands are supposed to be managed for “the greatest permanent value to the state.” The lawsuit argues that counties have lost out on hundreds of millions of dollars in revenue sharing since 1998, when the Department of Forestry began to emphasize environmental protection, recreation and other values in addition to timer production.

“This lawsuit is not about forest management. This lawsuit is a straightforward breach-of-contract (case),” argued Mark Gourley of Starker Forests, one of two speakers invited by the commissioners to lay out the pros and cons of participating or pulling out of the suit. “Opting out, in my opinion, is in direct conflict to the county’s responsibility to the taxpayers.”

Chris Smith of the North Coast State Forest Coalition took the opposite position.

“This lawsuit doesn’t come out of thin air,” Smith countered. “For the past several years, there has been a push from some counties and timber companies to drastically increase logging on state lands. … The Linn County lawsuit is the next legal prong in that effort.”

More than 100 people attended the town hall, and 45 of them stepped to the microphone to tell the commissioners their views on the lawsuit.

Just over half of those who spoke urged the commissioners to opt out of the lawsuit, arguing that the current forest management plan is working and that “greatest permanent value” should include environmental and recreational benefits as well as timber revenues.

Environmental activist Chuck Willer, director of the Coast Range Resource Association, said he helped draft the state’s current forest management plan in 1998, an effort he said had strong participation from the timber industry.

“We hashed out all this stuff back then,” he fumed. “For two years we talked this through.”

Many of those opposing the lawsuit also claimed that taxpayers would wind up footing the bill for any damages awarded by the court.

“Let’s get real,” said David Patte. “What are we going to do if this lawsuit goes forward and is carried out?”

Those in favor of staying in the lawsuit were just as passionate in their comments, with many arguing that the state has a contractual obligation to abide by the terms of the 1939 law.

“That ground was set aside to produce the maximum amount of timber revenue that it possibly could on a sustained yield basis,” said Wayne Giesy. “We need to have a management plan in place that meets the requirements of the original agreement between the state and the counties.”

And a number of speakers warned that they would not support future bond measures if the county ignored the opportunity to share in the suit’s financial benefits.

“If you opt out, you’re making a very strong statement that yes, Benton County has enough money that we don’t need this $30 million,” Charles Nelson said. “So when you come back in another year with a bond measure and you say you need this money, I will remember that.”

A significant number of those who favored staying in the suit said they didn’t necessarily support more logging but wanted the county “to have a seat at the table” in settlement negotiations with the state if the suit is successful.

It’s not clear how much money Benton County might receive if the lawsuit is successful. Early estimates were as high as $29.8 million, but preliminary rulings by the judge in the case may limit the potential damage award somewhat.

Benton County has a relatively small share of the land at issue in the suit, with only about 8,400 acres in the northwest corner of the county under Department of Forestry management. The amount of revenue from timber harvest on that land is highly variable. According to county records, the number has been as high as $936,000 in 2004 and as low as $114,000 in 2015.

The first $200,000 each year is generally set aside for road maintenance on those lands, and the remainder is split between the county and eight smaller taxing districts.

Members of the class have until next Wednesday to decide whether to remain part of the lawsuit. The Clatsop County Board of Commissioners voted 3-2 last week to pull out of the suit.

The Benton County commissioners are expected to make their decision on Tuesday.

The Benton County Board of Commissioners will accept written comments on whether to opt out of the timber lawsuit until 5 p.m. Friday. Comments can be emailed to bocinfo@co.benton.or.us or delivered to the county offices at 205 N.W. Fifth St. in Corvallis.

Local groups ask Benton commission to back out of timber lawsuit

A group of 15 environmental, outdoor, community and progressive organizations asked the Benton County Commission to pull the county out of a $…

Wayne Giesy, a tireless champion of Oregon forestry, dies at 99

Wayne Giesy never backed down from a fight. So it was no surprise to anyone that, when he broke his leg this summer on his Philomath-area tree… 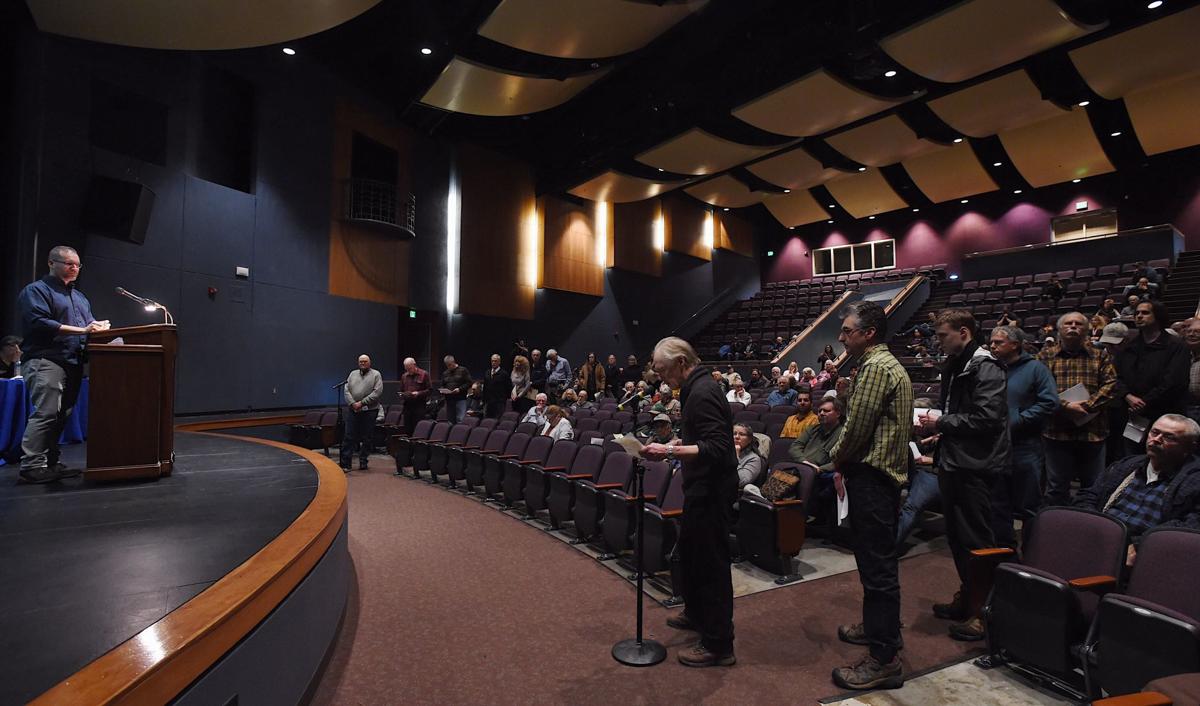 People line up at Corvallis High School on Tuesday to offer their opinions on whether Benton County should opt out of a Linn County lawsuit seeking $1.4 billion from the state for failing to maximize logging revenues on state forest trust lands. 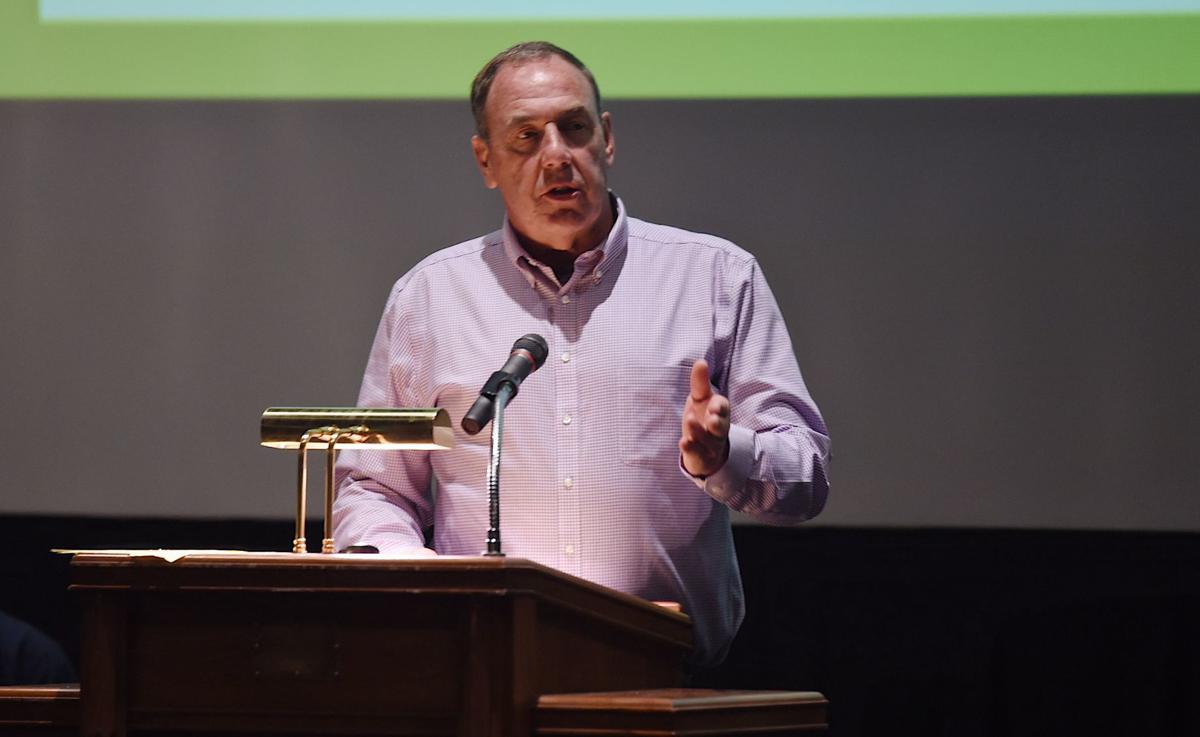 Mark Gourley of Starker Forests speaks during a town hall at Corvallis High School on Tuesday where residents could offer their opinions on whether Benton County should opt out of a lawsuit seeking more logging on state lands.