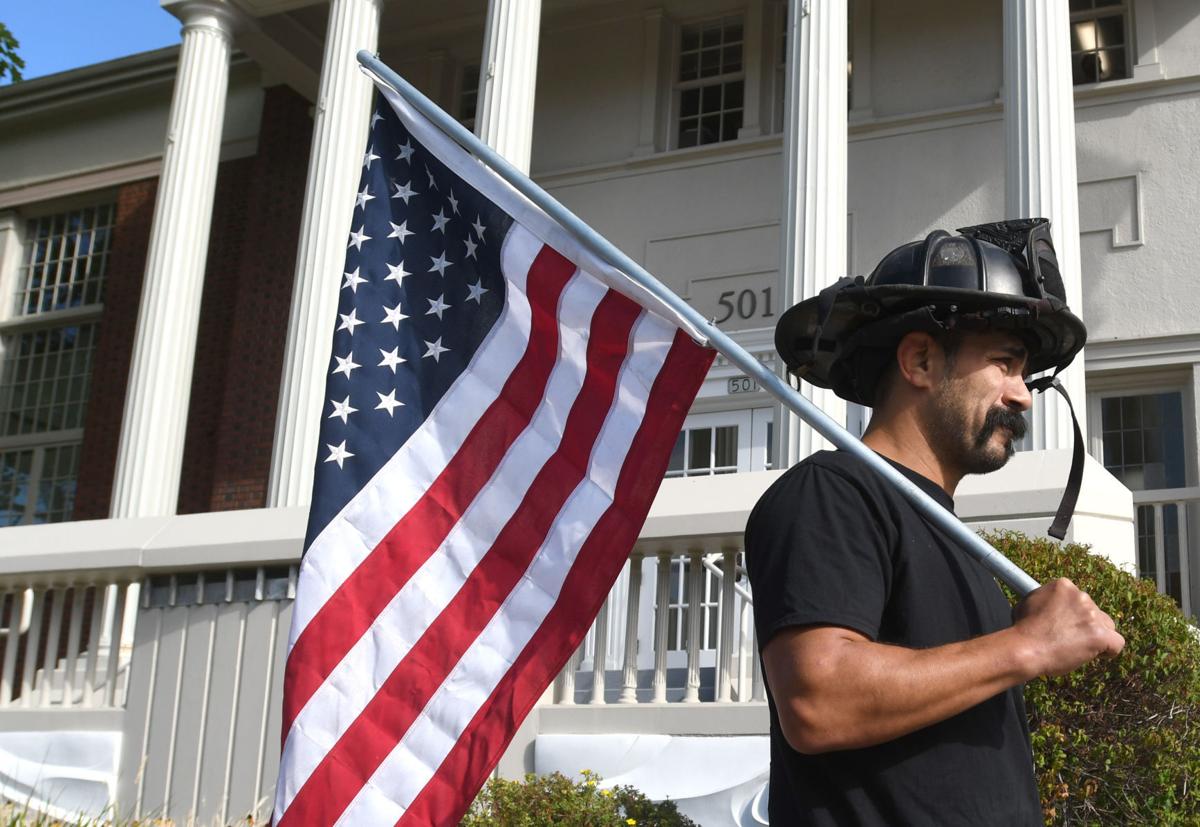 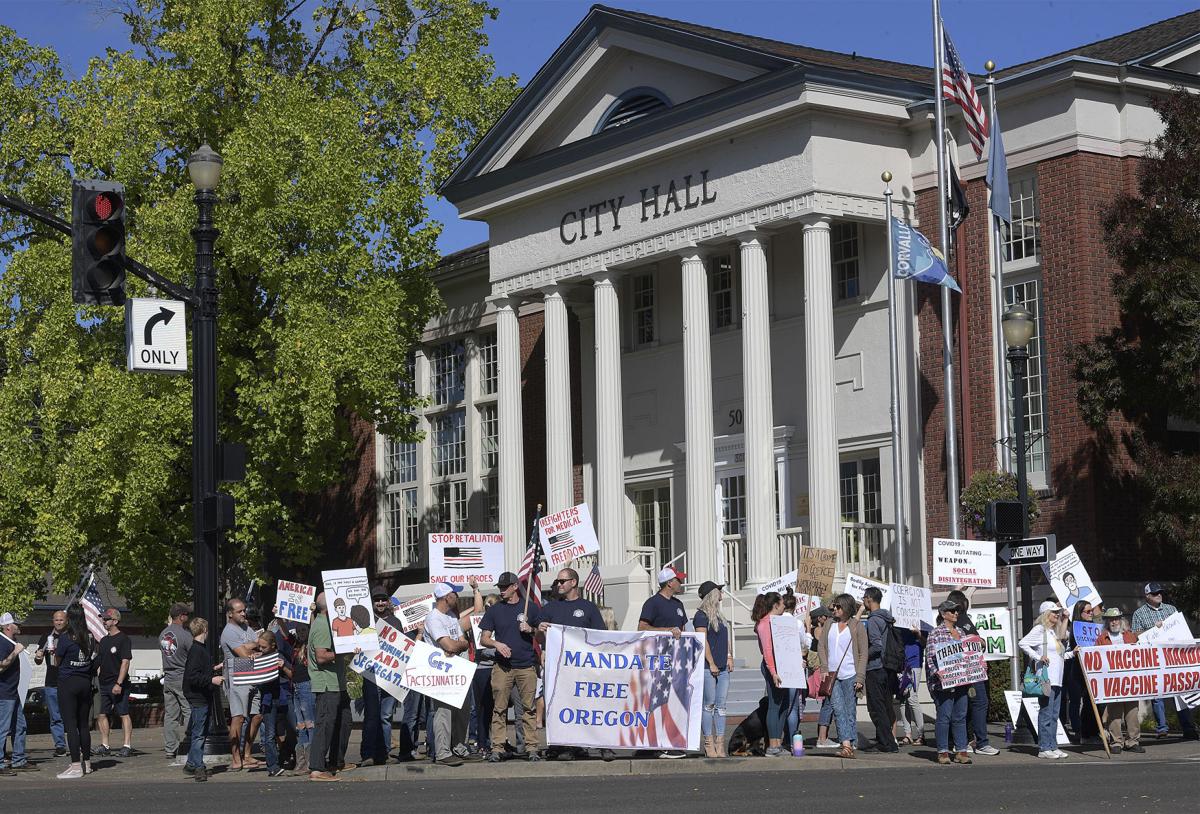 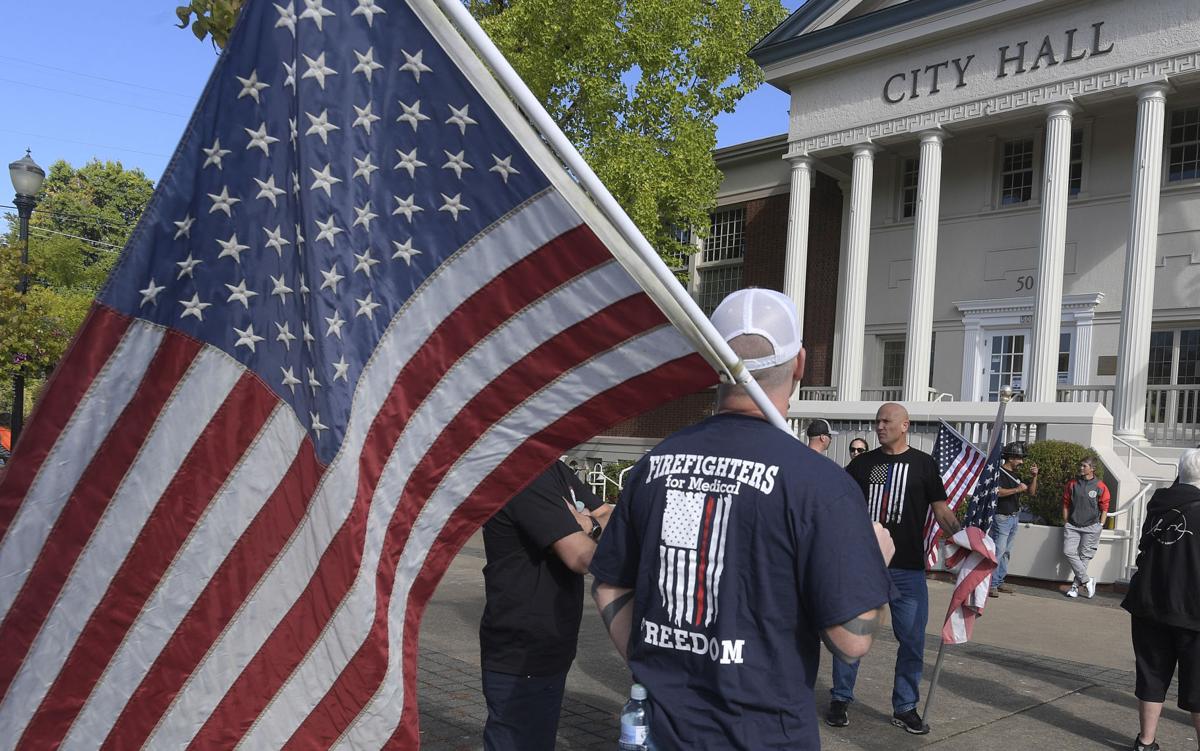 Corvallis' new directives for unvaccinated city firefighters brought an eclectic group of Oregonians to the front of City Hall in protest of rules they say are both discriminatory and punishments instead of accommodations.

Firefighters from nearly a dozen organizations stood shoulder to shoulder with a homeschool family from Harlan, an environmentalist from Eugene and a former Green Party senatorial candidate. They expressed their concerns centered around what several called "excessive" requirements for four Corvallis firefighters who have filed vaccine exemptions with the city.

At issue are rules handed down by the city of Corvallis that require exempt firefighters to segregate themselves during meal time and to wear a N95 masks at all times in the station, including when they sleep.

“The department had some employees that chose not to get vaccinated, and those employees requested an accommodation,” said Patrick Rollens, Corvallis public information officer. “The city chose to provide an accommodation to the unvaccinated employees. We had other options available to us under state law, including dismissing the employees or putting them on unpaid leave. But again, we chose to offer an accommodation.”

The protest, organized by the nonprofit Mandate Free Oregon, gathered Thursday morning around Corvallis City Hall holding signs while passersby honked to show their support for the firefighters. Several firefighters wore shirts with the words "Firefighters for Medical Freedom" on their backs.

"We believe that the city of Corvallis is imposing very unreasonable punishment against them," said Scott Stiener, spokesman for Mandate Free Oregon. "The idea that they are having to walk around wearing an N95 mask the entire time they're on shift, even when they sleep, is unreasonable.”

“All city employees, including firefighters, are required to wear masks while working indoors.” Rollens said.

Salem-area firefighter Juan Deleon, who resides in Albany, said he considered some of those measures over-the-top.

"In particular, having their employees sleeping with masks on," said Deleon, who has been a professional firefighter for 27 years. "It's basically overreach  by the city of Corvallis."

“We just want to express to the city of Corvallis it's just not right for them to be treating their firefighters this way,” said Stiener. “It’s not reasonable accommodation, they are punishments.”

Firefighters from both Albany and Lebanon joined first responders from as far away as Canby, Portland, Tualatin and Newberg at the morning protest. Several of the agencies have yet to fully implement the rules for unvaccinated firefighters.

"We do have the same concerns." said Desiree Barringer, a Lebanon firefighter. "We don't know exactly what's going to come down with our religious exemptions. A concern for us is that we are going to be in the same boat as these guys.”

Lebanon currently has three first responders that have requested exemptions, said Barringer who has been an engineer and paramedic with Lebanon Fire Department for 13 years.

“We had a lot more but people are getting nervous,” said Barringer.  “We had a lot of single income fathers that were really stressed about being able to provide for their families. They just went and did it out of duress and I think that's very unfortunate and unfair.”

In Albany there are nine or 10 firefighters who have requested exemptions, said Albany firefighter Charlie Williams.

"I’m here because I'm against forced vaccines,” Williams said. “It has to do with my faith. In all these vaccines they've used aborted fetal cells in either the manufacturing or testing and that's something I cannot condone based on my religion."

Williams came out with a fellow Albany firefighter to show his support for the Corvallis firefighters.

“There is no scientific basis whatsoever, for the segregation of the unvaccinated firefighters," said Williams.

“The only basis for setting up these accommodations and to ostracize members of the department is to publicly shame and to be discriminatory; there is no scientific data to support it whatsoever,” Williams said.

In the middle of the crowd of protesters lining the corners of Fifth Street and Madison Avenue stood Jack Dresser, a retired psychologist from Eugene who was one of a group of four that came up to support the firefighters.

Dresser, a well known organizer of Eugene's annual Earth Day celebration, expressed his concern of the overreach of Governor Brown's office using executive orders instead of going through the legislature for current COVID rules.

"I am here advocating government integrity for health crisis issues," said Ibra Taher, former green party senatorial candidate, who now considers himself nonpartisan. "I'm here to show my support for the firefighters. This issue of medical freedom is very pertinent to what's going on."

Mandate Free Oregon is also supporting the anti-vaccine cause through legal action.

"We have lawsuits going forward fighting the vaccine mandates imposed on healthcare workers, we have other ones going out for teachers," said Chrissy Fish of Mandate Free Oregon.

“Our sole focus is the vaccine,” said Fish, who has been a professional firefighter for 18 years.

Rollens wrote in an email that the Corvallis community had one of the highest vaccination rates in the nation during the height of the mass vaccination effort last year.

"City staff contributed hundreds of hours to the pandemic response and vaccination effort led by the Benton County Health Department. Our community strongly supports vaccination for everyone, particularly healthcare workers, to help us beat this pandemic," Rollens added.

According to the Oregon Health Authority, vaccination remains the most effective tool to reduce the spread of COVID-19, and cases of the illness are approximately four times more common in unvaccinated people.

A controlled burn at the Herbert Farm and Natural Area in Corvallis on Thursday was part of habitat restoration efforts aimed at improving the site.

It was perfect Scottish weather, according to Shelley Reed of Albany.