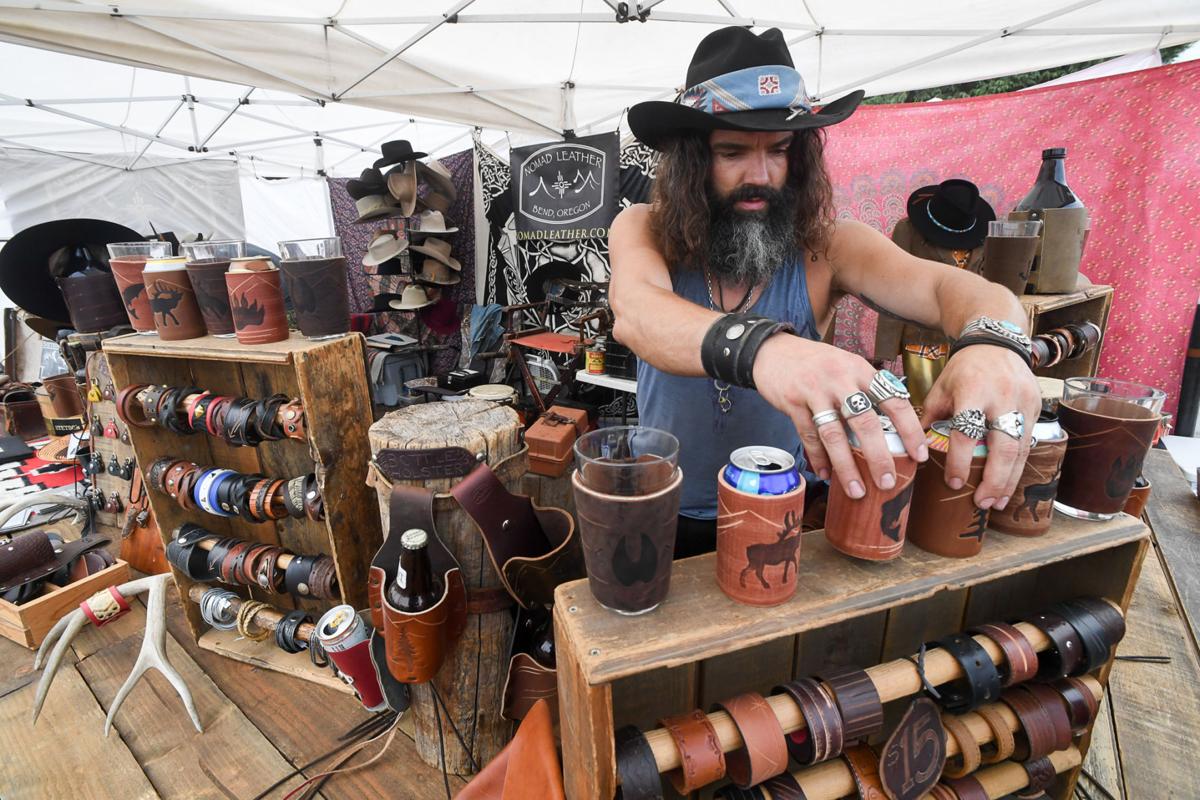 Damon Vracin with Nomad Leather is one of the vendors who set up shop in Sweet Home for the Oregon Jamboree on Friday. This is the fifth Jamboree for Nomad and Vracin said it likely will produce his highest sales of the summer. 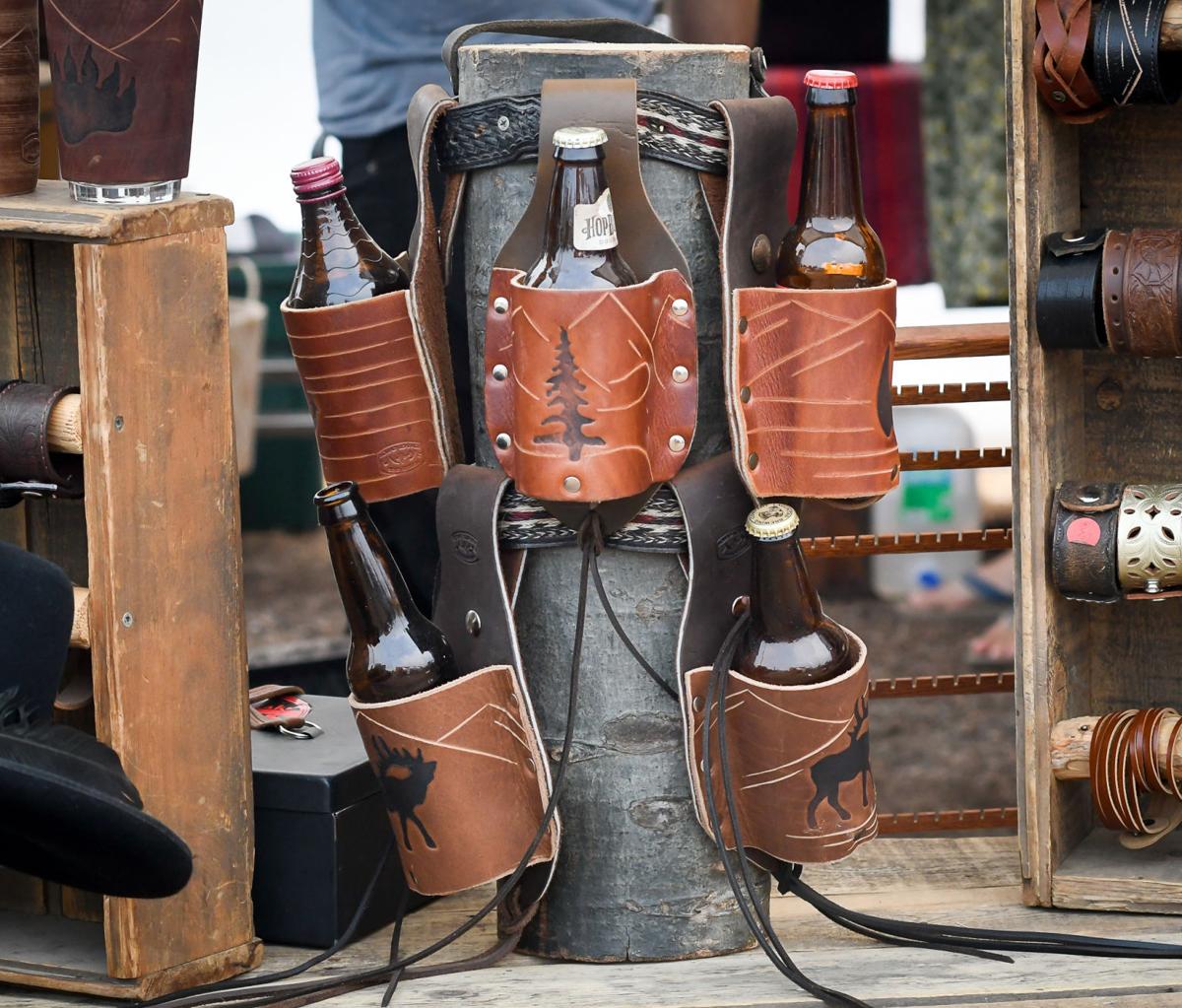 Damon Vracin with Nomad Leather said the beer holsters are his most popular item when he has a booth at the Oregon Jamboree. 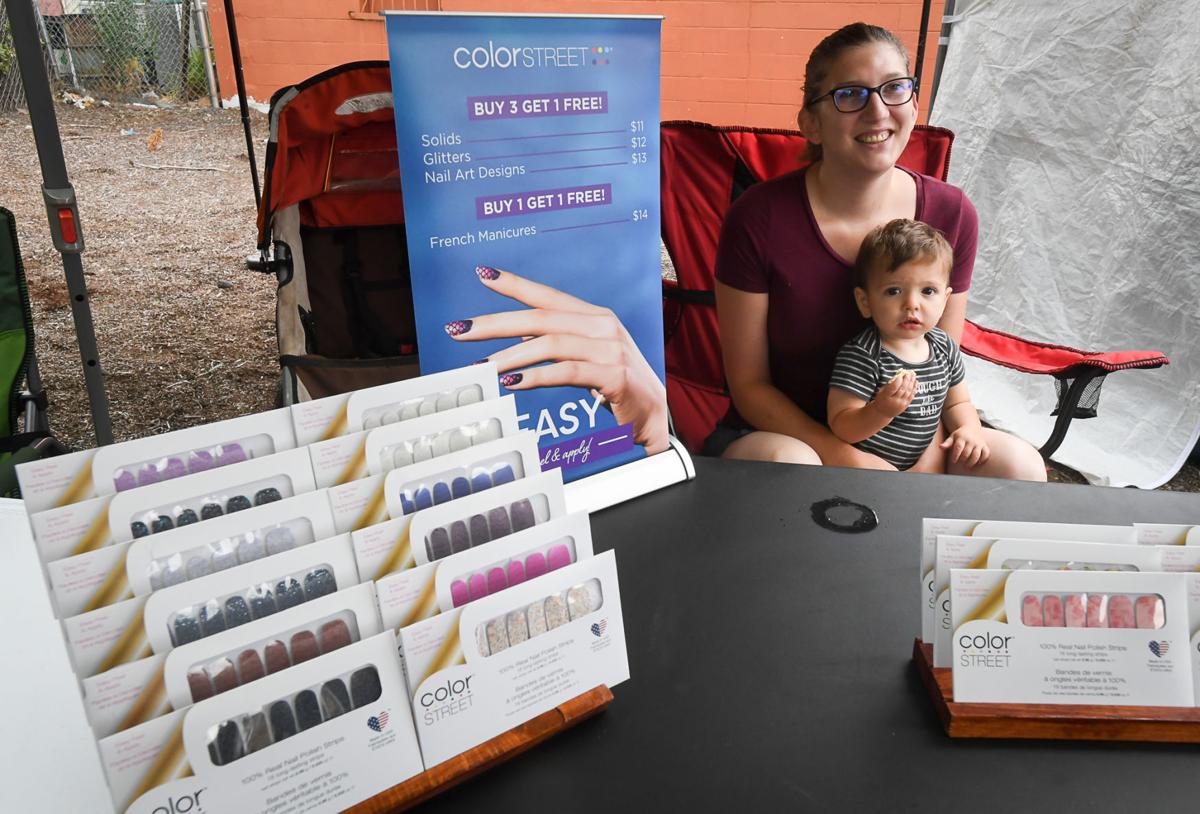 Dawnnita Grose, shown in her nail polish tent, is a first time vendor in Sweet Home for the Oregon Jamboree. She thinks the Jamboree will give the town a big boost. 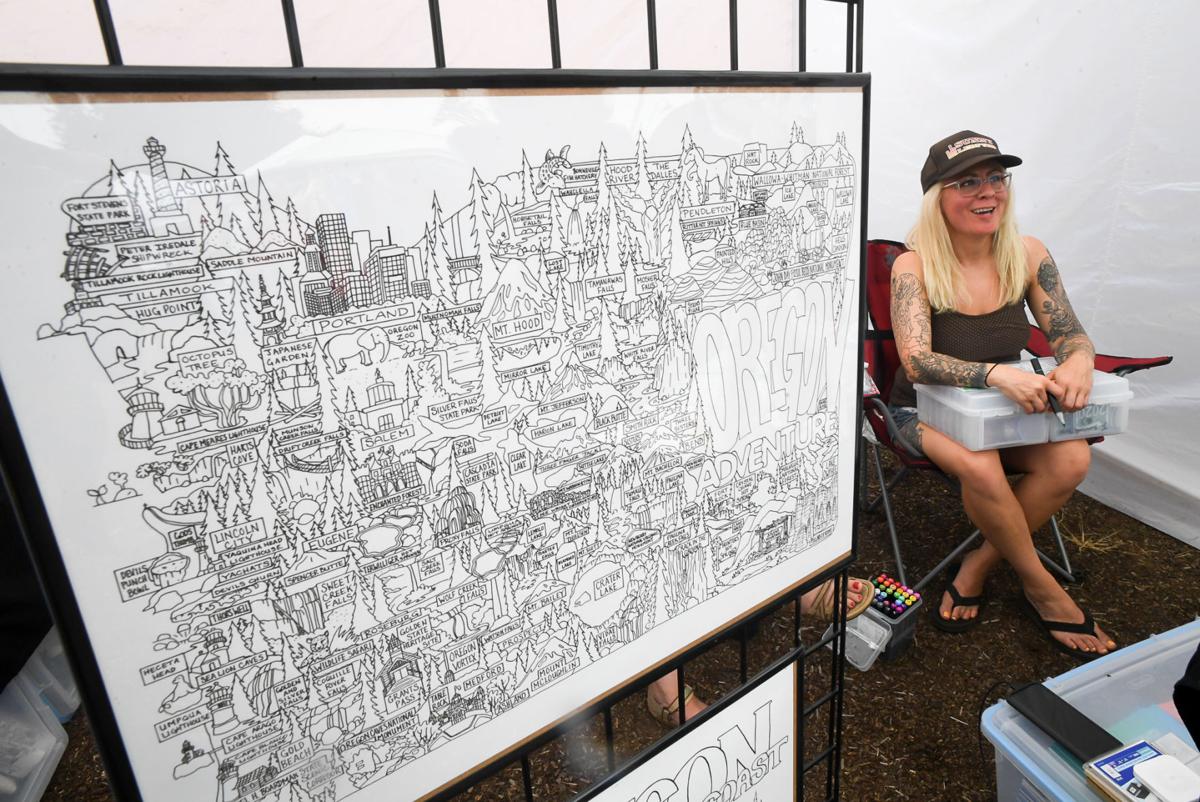 Aimee Fogoros has traveled throughout Oregon to create the posters and coloring books she is selling at the Oregon Jamboree this year. 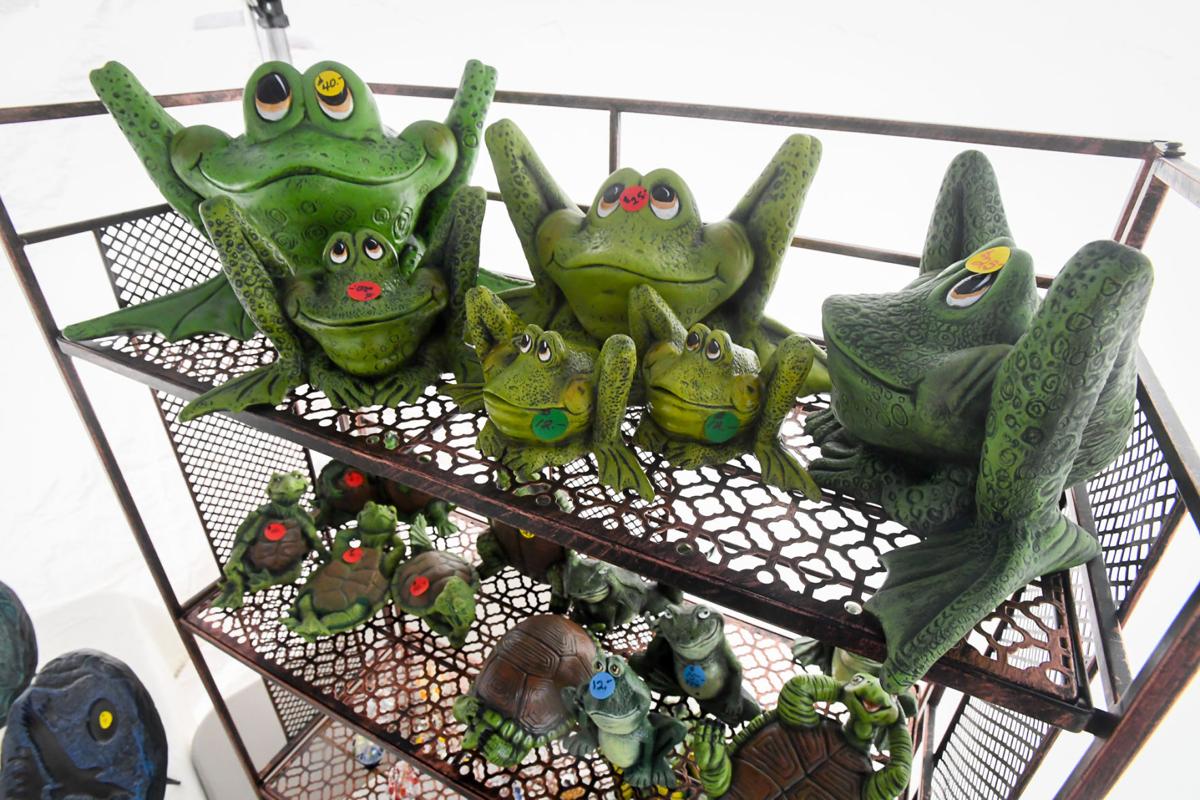 Carolyn Morton of Sweet Home said that her frogs are the most popular item she sells at her booth, Carolyn's Creations, just outside the Oregon Jamboree. 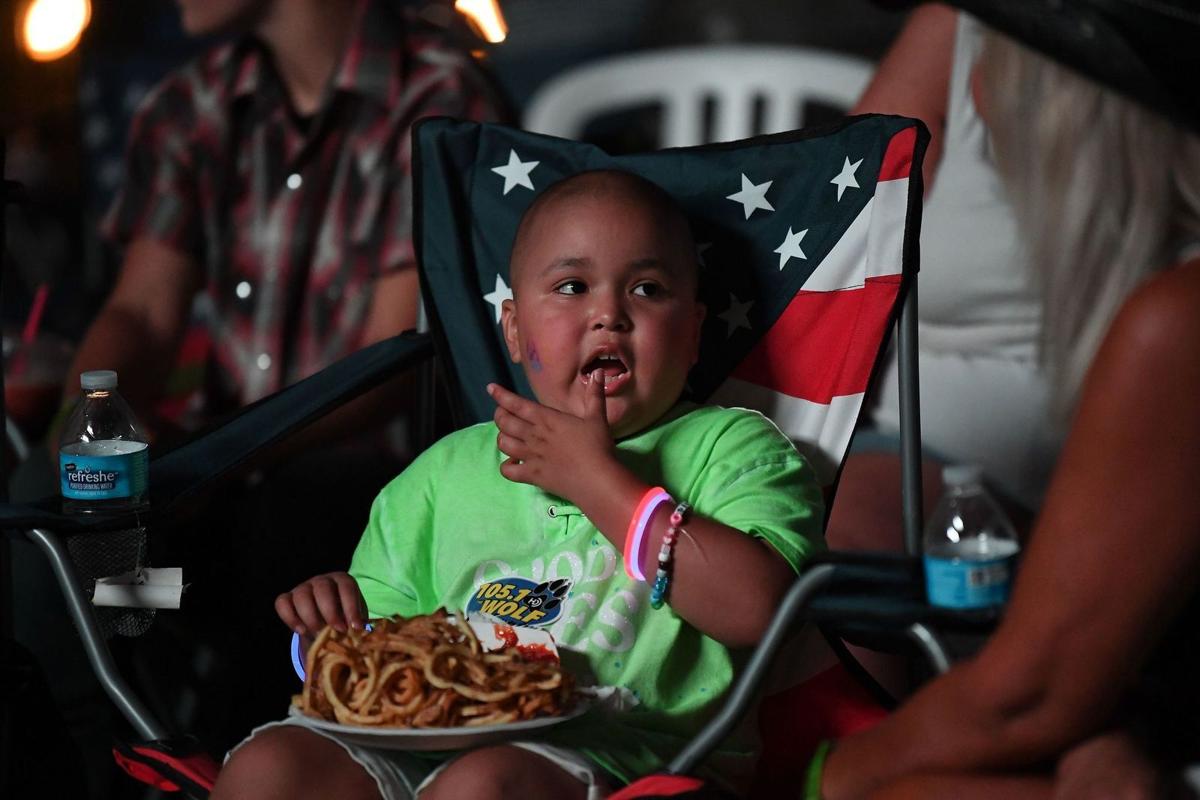 A young fan enjoys a plate of curly fries at Friday night's show at the Oregon Jamboree in Sweet Home.

SWEET HOME — The Oregon Jamboree, wrapping up in Sweet Home today, brings a lot of business to the Linn County community. It also brings all the headaches that come with so many thousands of people converging on the community.

Many local businesses described the weekend of the Jamboree as their biggest of the year, even more than the sales holidays of Thanksgiving and Christmas. For other kinds of vendors, the music festival circuit provides the best chance to sling their wares.

For Nomad Leather, based in Bend, 2021 is the fifth time they’ve set up a booth to sell leather products, jewelry and Stetson hats.

“This should be the largest festival we do this summer,” said leatherworker Damon Vracin, mentioning that they also have plans to be vendors at the Chinook Festival near Yakima, Washington, and the Four Peaks Music Festival in Bend.

“Yeah, it’s always a good crowd, fun crowd,” Vracin said of the Jamboree. “There’s not a lot of negativity. The country music scene, I think, brings a lot of that positivity.”

Nomad Leather and other vendors were set up in a lot off of Main Street dubbed “Artisan’s Alley,” which is organized by the Sweet Home Chamber of Commerce. These kinds of vendors would normally be set up inside the venue itself, but to reduce crowds of people during a pandemic the booths were moved to the streets.

Aside from festival vendors, downtown businesses in Sweet Home also tend to see a huge uptick in business during the three-day span. Mr. Lucky’s Deli, Sugar Vibes Donut Shop, The Sweet Home Inn and many other businesses described the weekend as the biggest of the year for them in terms of sales.

Garage sales crop up in Sweet Home neighborhoods to take advantage of the higher customer base, as well. It’s not just Sweet Home businesses, either. Nearby hotels in Lebanon and Albany tend to get booked up, too.

But more sales means more people, and more people can mean more trouble. Not everyone is as enthused by the bustle that accompanies the crowds. The heavy traffic, the drunken altercations and the rubbish left behind in campgrounds were all cited by locals as negative aspects of the recurring country music showcase.

“There’s a lot of locals who specifically leave town whenever the Jamboree is here, so if anything it’s a wash,” said Jon Farthing, who co-owns the OK Country Feed & Supply store on the west end of town. “People live in a town like this because it’s not inundated with traffic problems and whenever there’s — I don’t know what the final count is — but something like 30,000 people in town over the weekend, it’s kind of a trying time for a lot of people.”

Farthing and his wife, Diane, are one of those families that tends to flee the area to avoid the crowds, especially because they say their business doesn’t see much of an uptick during the Jamboree.

“I think the Jamboree itself, it helps a lot of people on the other end of town,” said Diane Farthing. “But I know some people who are in this end of town and they’ll come in and grumble about it. It gets really congested downtown. If you’re going through, there’s just lots of cars and bodies.”

One homeowner standing on her porch on 18th Street, right near the entrance to the festival grounds, could be heard complaining to someone on the other line of a phone call Friday morning that people had tried to park in her driveway without permission the night before. Some businesses had their parking lots cordoned off with traffic cones and yellow tape to avoid the same kind of thing from happening.

John Suh, the night manager of Mr. Lucky’s, said that he often has to deal with the drunken crowds heading into the restaurant for a few more drinks once they’re done at the festival grounds. He also mentioned the trash that blows down the streets from parking lots turned into temporary campgrounds.

“It’s a good festival but most of the local people, they’ve kind of had it with the camping and the trash around,” said Suh. “It’s kind of a nightmare, it’s crazy. (Attendees) walk around, find the restaurants for the food … and they’ve been drinking like crazy. There’s a lot of drunk people coming in during night time.”

Sometimes, he has to cut off these intoxicated folks and he says it can lead to some tense exchanges. Nevertheless, Suh said the business relies on the boost in sales thanks to the Jamboree crowd.

Even those who sympathize with the grumblers say they recognize the community value of the festival to the community. It’s also a major source of fundraising and volunteerism.

“A lot of the kids benefit from it,” said Diane Farthing. “They volunteer or do the can collections … it’s a good way to teach them to I guess volunteer and also raise funds for different sports.”

The cans component will be huge this year, because the Jamboree has switched to exclusively canned beers sold at the festival. Jamboree director Robert Shamek estimated that there could be $10,000 worth of cans for teens to collect and redeem. The festival itself also cuts a check every year to the school district, which is divided out among various school-sponsored squads and activities.

“Into this area, we’ll bring millions of dollars,” said Shamek of the economic benefit. “A lot of our patrons look forward to going out into our community.”

Local churches and other properties tend to prosper by offering their parking lots for festival attendees. Prices can range from $10 to $20 or even higher for all-day parking.

The ability to make money off the crowds is one that vendors say can’t be overstated. After a long year of COVID-related closures, many said that this year’s festival is their saving grace.

“All these businesses, they were waiting for this,” said Dawnnita Grose, who manned her Color Street nail polish sales tent in Artisan’s Alley. “This is going to save a lot of small businesses, even the bars.”

“This is huge for Sweet Home, it always is,” she added. “And it couldn’t have come at a better time.”

Please see this story at the website for a photo gallery from Friday's artists.

The Oregon Jamboree, one of the biggest country music festivals in the state, kicks off this weekend in Sweet Home. The annual three-day affai…

It was a disheartening week of steps backward in terms of COVID-19 caseloads. While deaths have decreased, caseloads have soared and hospitali…

Containment of the Bruler Fire burning northeast of Sweet Home has more than doubled since the weekend, with crews making progress on mop up e…

SWEET HOME — The Willamette Valley county that has the highest risk of COVID-19 transmission, according to the Centers for Disease Control and…

Damon Vracin with Nomad Leather is one of the vendors who set up shop in Sweet Home for the Oregon Jamboree on Friday. This is the fifth Jamboree for Nomad and Vracin said it likely will produce his highest sales of the summer.

Damon Vracin with Nomad Leather said the beer holsters are his most popular item when he has a booth at the Oregon Jamboree.

Dawnnita Grose, shown in her nail polish tent, is a first time vendor in Sweet Home for the Oregon Jamboree. She thinks the Jamboree will give the town a big boost.

Aimee Fogoros has traveled throughout Oregon to create the posters and coloring books she is selling at the Oregon Jamboree this year.

Carolyn Morton of Sweet Home said that her frogs are the most popular item she sells at her booth, Carolyn's Creations, just outside the Oregon Jamboree.

A young fan enjoys a plate of curly fries at Friday night's show at the Oregon Jamboree in Sweet Home.