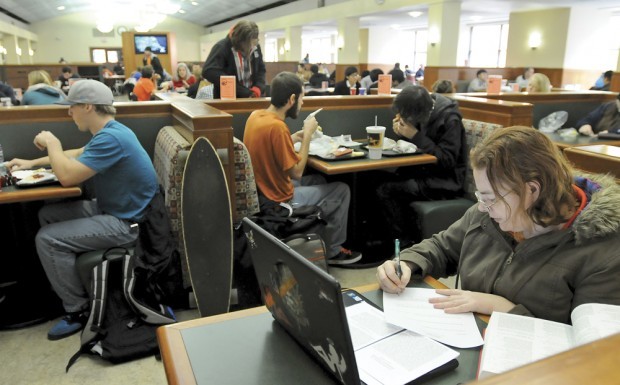 Freshman Roseallynn Northcutt, right, tackles a homework assignment as The Commons at the Memorial Union is filled with students on their lunchbreak Thursday afternoon. (Amanda Cowan | Corvallis Gazette-Times) 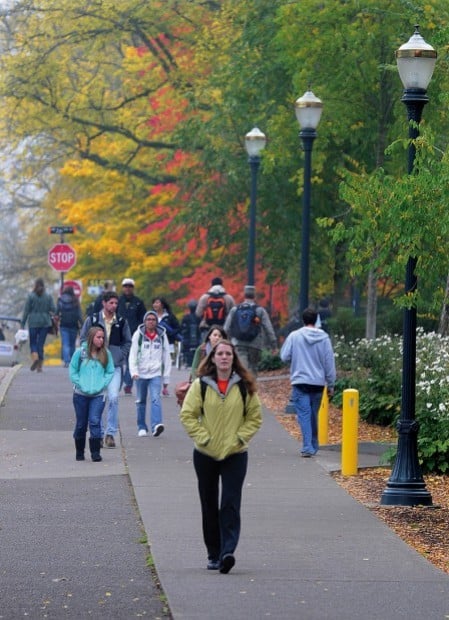 Officials announced Thursday that nearly 25,000 students enrolled at Oregon State University this fall, a record total that includes a significant number of transfer and out-of-state students.

Overall, OSU’s student population is 24,977, up 5.1 percent from last fall. It’s the second-largest percentage increase of students within the seven-institution Oregon University System.

The numbers are based on an annual count of students during the fourth week of the term.

Among this year’s students, 1,804 are transfer students and 1,519 students hail from outside of Oregon.

A shaky economy explains the increase in both demographics. More people are likely to attend a community college and eventually a four-year university when unemployment is high, and budget woes in California and Washington have sent public university tuition in those states skyrocketing. That made Oregon’s public universities look appealing and provided OSU with its two biggest sources of out-of-state students.

Oregon State credits the growth in new transfer student enrollment to dual-enrollment agreements with each of Oregon’s 17 community colleges, plus a handful of junior colleges in Washington and Hawaii. The partnerships ensure that dual-enrolled students get advising that helps them quickly progress toward an OSU degree while saving money with lower-priced community college credits.

“It helps OSU to do even more to fulfill its land grant mission,” said university spokesman Todd Simmons, adding that OSU is the state’s only public university to have partnerships with all Oregon community colleges.

Simmons also noted that many new students are high achievers. In September, the Gazette-Times reported that 140 new OSU students were valedictorians of their high schools.

And many traditional students — new in-state freshmen who just finished high school — have found a home at OSU. About one-third of new Oregon freshmen enrolled in the state’s public universities this fall are attending OSU.

Oregon’s public university system also saw an overall record enrollment, with 100,316 students. Enrollment is up 35.8 percent since 2001, when 73,883 students enrolled.

The system’s growth is outpacing the 10-year national average of 22.8 percent at public four-year institutions. Oregon University System spokeswoman Di Saunders said that’s due to a number of factors: Oregon’s overall population growth, easy pathways between community colleges and universities and individualized efforts to retain students, such as culturally focused programming and mentoring.

The latter can be a tough task in light of dwindling state funds. The Oregon University System’s 2011-13 budget is down 11 percent from last biennium.

“The campuses have done a really excellent job despite the funding cuts,” Saunders said.

Freshman Roseallynn Northcutt, right, tackles a homework assignment as The Commons at the Memorial Union is filled with students on their lunchbreak Thursday afternoon. (Amanda Cowan | Corvallis Gazette-Times)