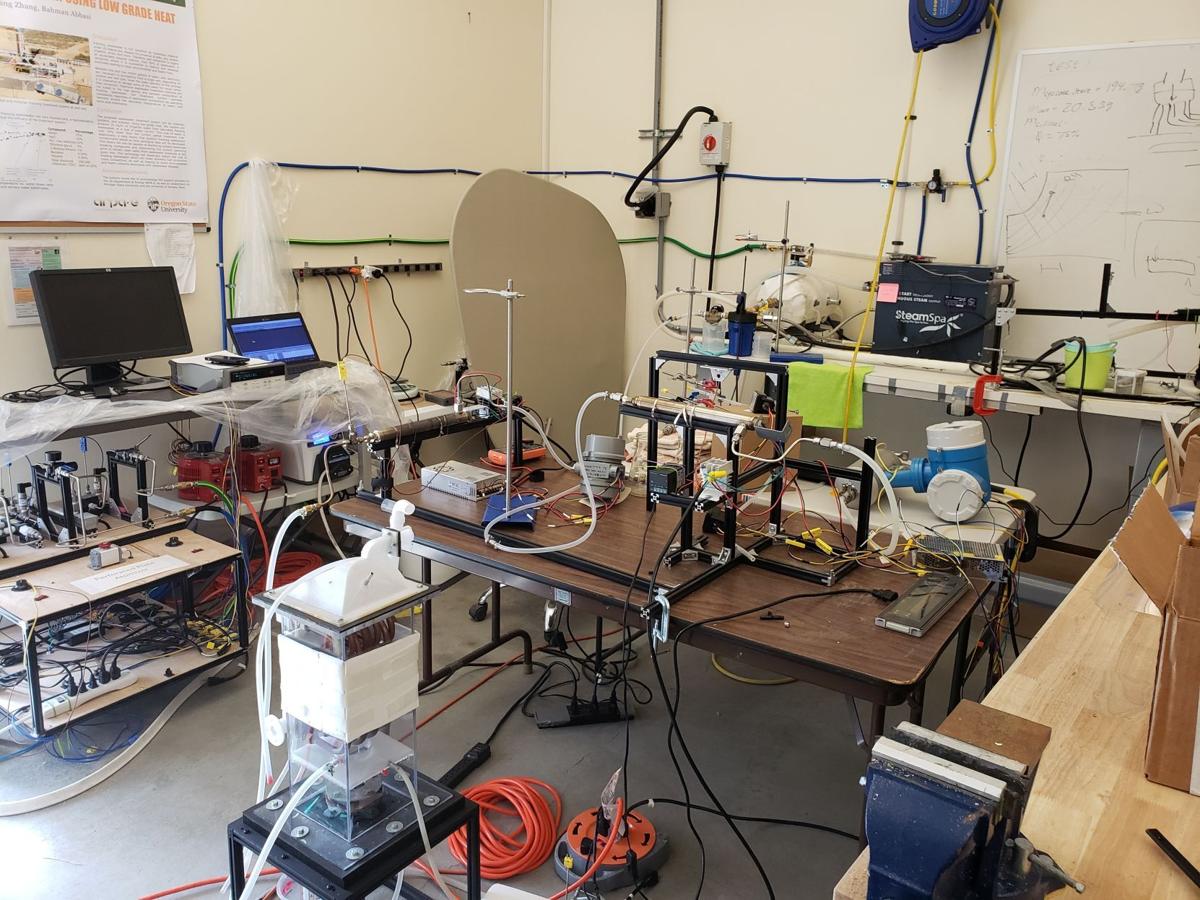 Here is a look at the lab at the OSU Cascades campus in Bend where Espiku is working on a prototype for solar-powered desalination. 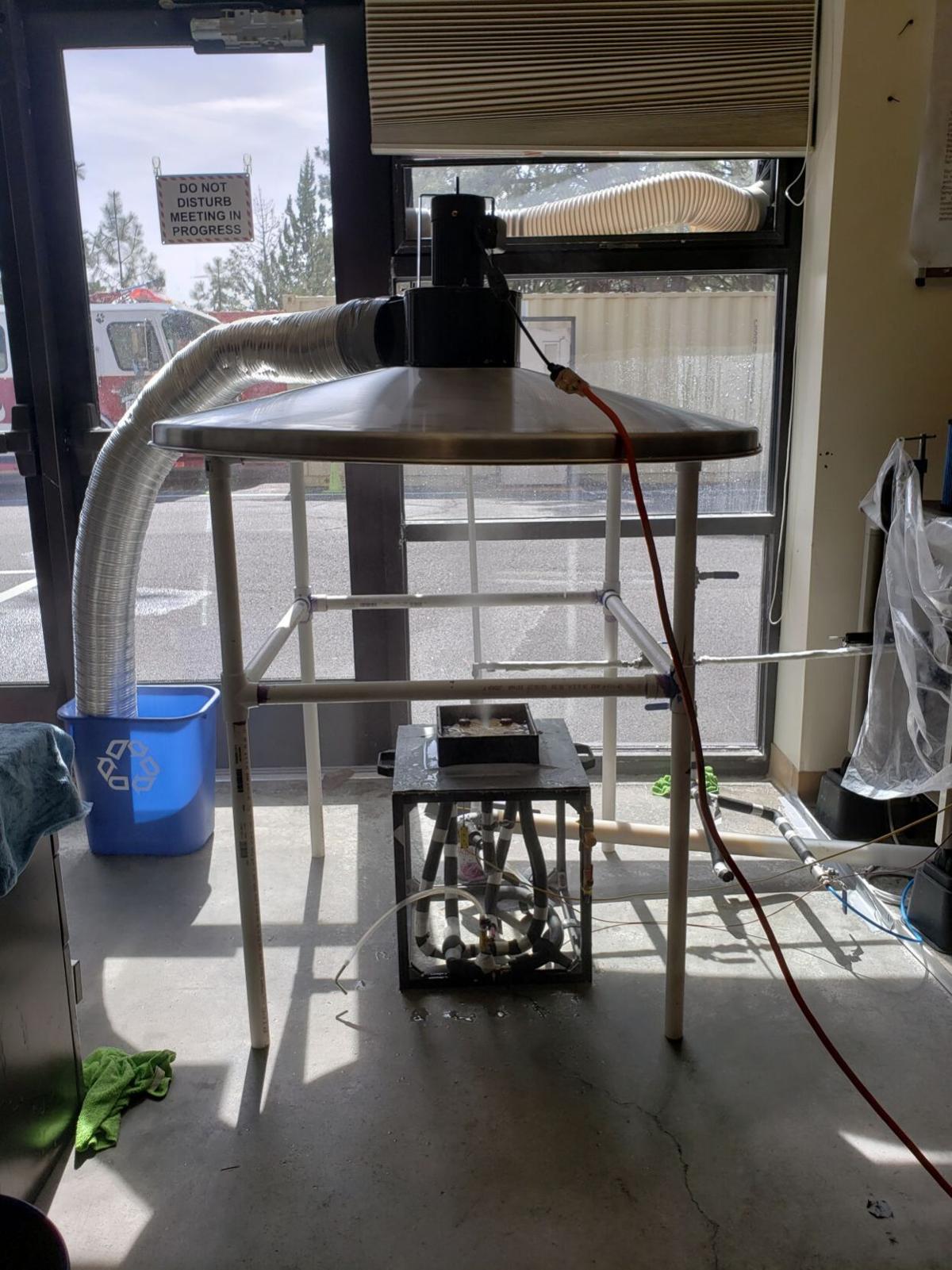 Here is a look at the work on the prototype for Espiku's solar-powered desalination unit. 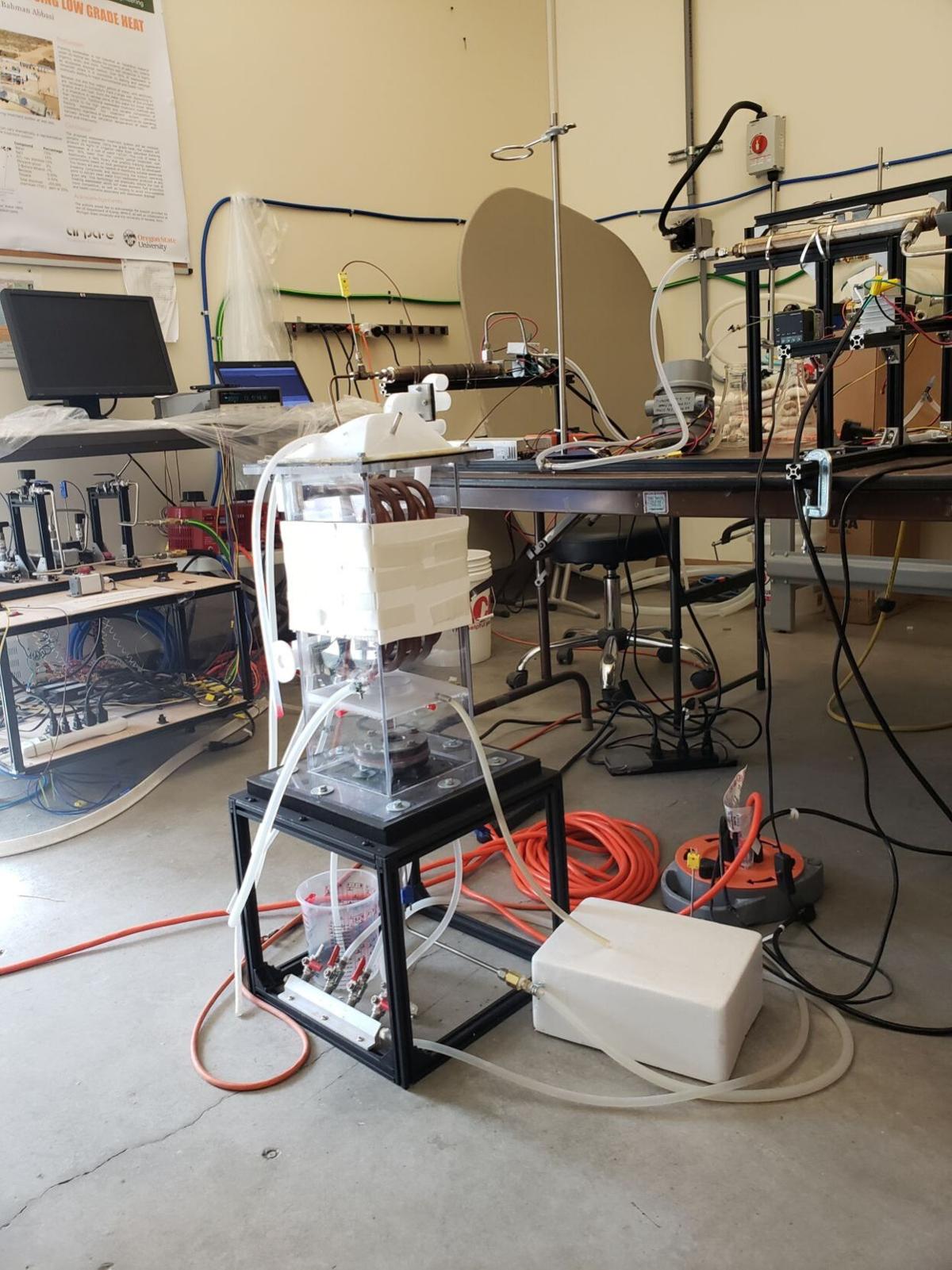 Espiku, a company with ties to Oregon State University, has moved ahead in a competition aimed at producing solar-powered desalination technology.

A company with Oregon State University ties has advanced to the final eight of a lucrative competition to desalinate water using solar power.

Espiku (see www.espiku.com for more information), with scientists and researchers at the Corvallis campus and at the Cascades campus in Bend, received $250,000 in cash and a $100,000 voucher to continue its work.

Advancing to the next round would yield $750,000 and another $100K voucher, with the ultimate winner taking home $1 million.

“We are honored and thrilled to be one of the eight semifinalists,” said Bahman Abbasi, an assistant professor of mechanical, industrial and manufacturing engineering (a field known as MIME for short) at OSU’s Cascades campus. “The project aims to design and build a pilot plant to clean oil/gas wastewater and produce clean water with zero liquid discharge.”

Abbasi, who formed Espiku last October, is leading a team that includes 15 people: a full-time engineer, two postdoctoral researchers, seven graduate students and five undergrad research assistants. The postdocs and grad students are based in Corvallis, with the rest of the team in Bend. The project also is being constructed in Bend.

Despite the distance — the two campuses are 130 miles apart — Abbasi said the work is moving forward well.

“OSU's College of Engineering, and particularly MIME, has an extraordinary culture of collaboration and empowering research and innovation," he said. “(Everyone) has been tremendously supportive of our research.”

More support is needed, however.

“The prize is a great help to enable further development. However, much more funding is needed to design and build the pilot unit,” Abbasi said. “We are working with state agencies and looking at opportunities within the federal government to augment the prize and continue our work. We are working hard to bridge the infamous ‘valley of death’ which nascent technologies encounter.”

Aside: Investopedia says a startup company’s “death valley curve” is the span of time from its initial capital contribution until it finally begins generating revenue. During this window it can be difficult for firms to raise additional financing since the business model has not yet been proven. End aside.

The competition is being funded by the federal Department of Energy.

“As more communities face water shortages due to climate change, these new systems could expand the use of nontraditional water sources and ease the burden.”

Water desalination requires a lot of energy, which is a major part of its cost, Speakes-Backman said, adding that “solar-thermal energy is a potential low-cost option for cleaning high-salinity water that conventional desalination technologies have difficulty treating cost-effectively.”

All competitors have access to technical assistance and support via the American-Made Network, a group of DOE national labs, incubators, investors and industry experts who can facilitate connections with venture capital firms, industry representatives and others.

The prize is part of the Water Security Grand Challenge, a DOE-led effort started in 2018 to advance transformational technology and innovation to meet the global need for safe, secure and affordable water. The desalination competition is one of DOE’s American-Made Challenges, a series of contests that incentivize the nation’s entrepreneurs to strengthen U.S. leadership in energy innovation and domestic manufacturing.

A total of 162 applications were received, with 19 quarterfinalists selected for the second round and eight semifinalists, including Espiku, continuing in the competition.

Desalination is a process that takes away mineral components from saltwater. More generally, desalination refers to the removal of salts and minerals from a target substance, as in soil desalination. Saltwater (especially seawater) is desalinated to produce water suitable for human consumption or irrigation. Most of the modern interest in desalination is focused on cost-effectively providing fresh water for human use. Along with recycled wastewater, it is one of the few rainfall-independent water resources.

Due to its energy consumption, desalinating seawater is generally more costly than fresh water from surface water or groundwater, water recycling and water conservation. However, these alternatives are not always available, and depletion of reserves is a critical problem worldwide. Desalination processes are usually driven by either thermal (in the case of distillation) or electrical (in the case of reverse osmosis) as the primary energy types.

Once you entered the greenhouse compound at Oregon State University they weren’t hard to spot. Amid the broccoli and beans, purple tomatoes st…

How much protection does “protected area” status provide for forest lands and reserves? And what is the impact of that protection on deforesta…

An Oregon State University scientist famed for his work with specimens in amber, has come up with a new discovery.

It felt like you were entering a Bond or Bourne film. The door was unlocked and whap! — you were face to face with enough monitors and compute…

Here is a look at the lab at the OSU Cascades campus in Bend where Espiku is working on a prototype for solar-powered desalination.

Here is a look at the work on the prototype for Espiku's solar-powered desalination unit.

Espiku, a company with ties to Oregon State University, has moved ahead in a competition aimed at producing solar-powered desalination technology. 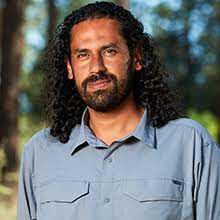