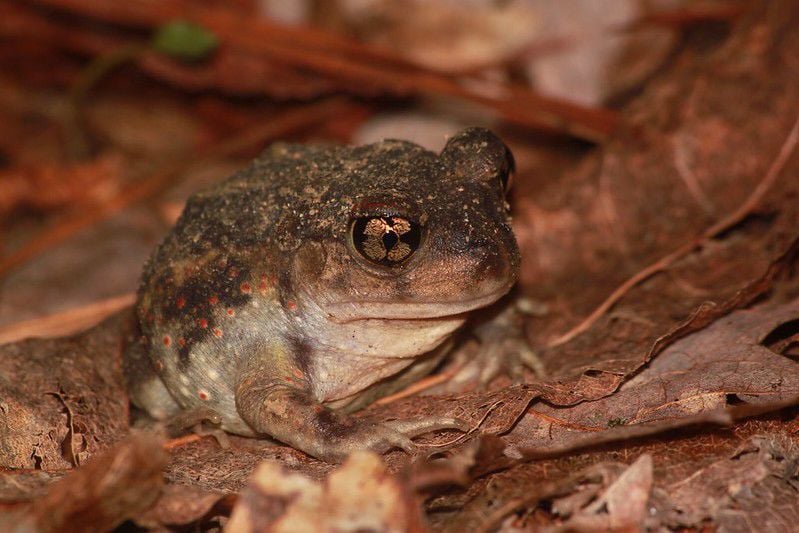 Spadefoot toads are much more common above ground than thought, according to research by an Oregon State University graduate student. 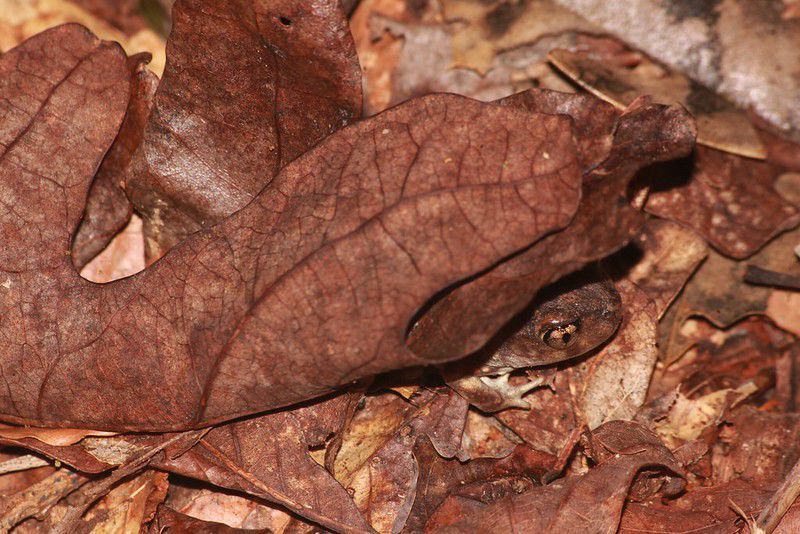 A spadefoot toad can be seen under a leaf. An Oregon State University grad student used spotlighting to better measure the species' range and viability.

Research by an Oregon State University graduate student has shed new light on the status of a toad previously thought to be endangered.

Anne Devan-Song, a doctoral candidate studying integrative biology in OSU’s College of Science, used spotlighting — shining a light in a dark spot and looking for eye reflections — to find large numbers of the eastern spadefoot toad. The study illustrates how confirmation bias, a tendency to interpret new information as ratification of existing theories, can hamper discovery and the development of better hypotheses.

“Confirmation bias perpetuated the fallacy of when the eastern spadefoot could be found,” Devan-Song said. “No breeding events or migration occurred during our surveys and we detected thousands of toads in Virginia and dozens in Rhode Island.

“The majority of those were subadults, a demographic category mainly overlooked in the literature. Progress in learning about the toad, its ecology and its conservation has been greatly hindered by a misconception that persisted even when evidence to the contrary was presented.”

Her findings, which show that the toad spends much more time above ground than commonly believed, were published in the Journal of Herpetology.

Devan-Song grew up in Singapore, where she learned she could search for reptiles and amphibians by spotlighting. In Rhode Island, where she earned a master’s degree and then worked as a university research associate, the eastern spadefoot toad is endangered.

One rainless night while surveying for amphibians during a project in Virginia, Devan-Song’s spotlight detected numerous eastern spadefoots. That surprised her because the toads were thought to be detectable only on a few rainy nights every year when they emerge from underground burrows to mate in wetlands.

She continued looking for eastern spadefoots and kept finding them on dry nights, including in upland forest locales not close to any damp areas. Spadefoots remain still when spotlighted so it was easy for Devan-Song to approach and positively identify the toads.

“They need to get above ground to hunt for insects and build up energy stores for mating,” she said. “That’s why we were finding them when and where conventional wisdom said we weren’t supposed to be finding them.”

She tried spotlighting for spadefoots when she returned to Rhode Island; it took her just 15 minutes to find one. The success led to a 10-night survey in a pair of locations last summer that produced 42 sightings, nearly double the number of eastern spadefoot toad sightings in Rhode Island over the previous seven decades.

Devan-Song also learned that she wasn’t the first to question the notion that the eastern spadefoot was so “secretive” as to almost always avoid detection. As far back as 1944, Devan-Song said, it was suggested in scientific literature that the toad could be found outside of rain-induced migration and breeding aggregations. And in 1955, researchers used spotlighting to detect huge numbers of eastern spadefoots in Florida. However, for reasons that aren't clear, the technique subsequently fell into disuse.

The ease with which many toads could be found during breeding, combined with a lack of data on toads in upland habitats, helped fuel confirmation bias in this case, she said.

“Everyone assumed they were underground most of the time so no one was really looking for them most of the time,” Devan-Song said. “Our research demonstrates that you can detect them year-round, though they do remain rare in Rhode Island. But likely not as rare as the scientific community thought.”

The National Park Service, through a cooperative agreement with the University of Rhode Island, supported the research.

American spadefoot toads, which are native to North America, is a relatively small family, comprising only seven different species. The toads are of typical shape for burrowing frogs. They are round, with short legs and protruding eyes. As suggested by their name, these frogs have hard, keratinous protrusions present on their feet, which help them to dig. Like most burrowing frogs, they dig backward into the ground. They differ from true toads because they have vertical pupils and no parotoid gland. American spadefoot toads are terrestrial when not underground. They are dully colored, usually a grey or dull green or brown, to aid in camouflage in their arid habitats. It is a species of conservation concern in the northern reaches of its territory.

What makes certain areas of forests survive wildfires and others burn?

Richard Spinrad, an Oregon State University professor and former vice president for research, has been confirmed by the U.S. Senate to be unde…

Oregon State University researchers have uncovered new evidence of the impact of the famed 1700 earthquake in the Pacific Northwest.

Oregon State University leaders are pushing to announce a new president by May, with a July start date as a target.

Spadefoot toads are much more common above ground than thought, according to research by an Oregon State University graduate student.

A spadefoot toad can be seen under a leaf. An Oregon State University grad student used spotlighting to better measure the species' range and viability. 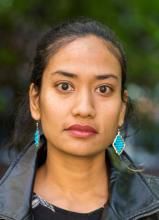