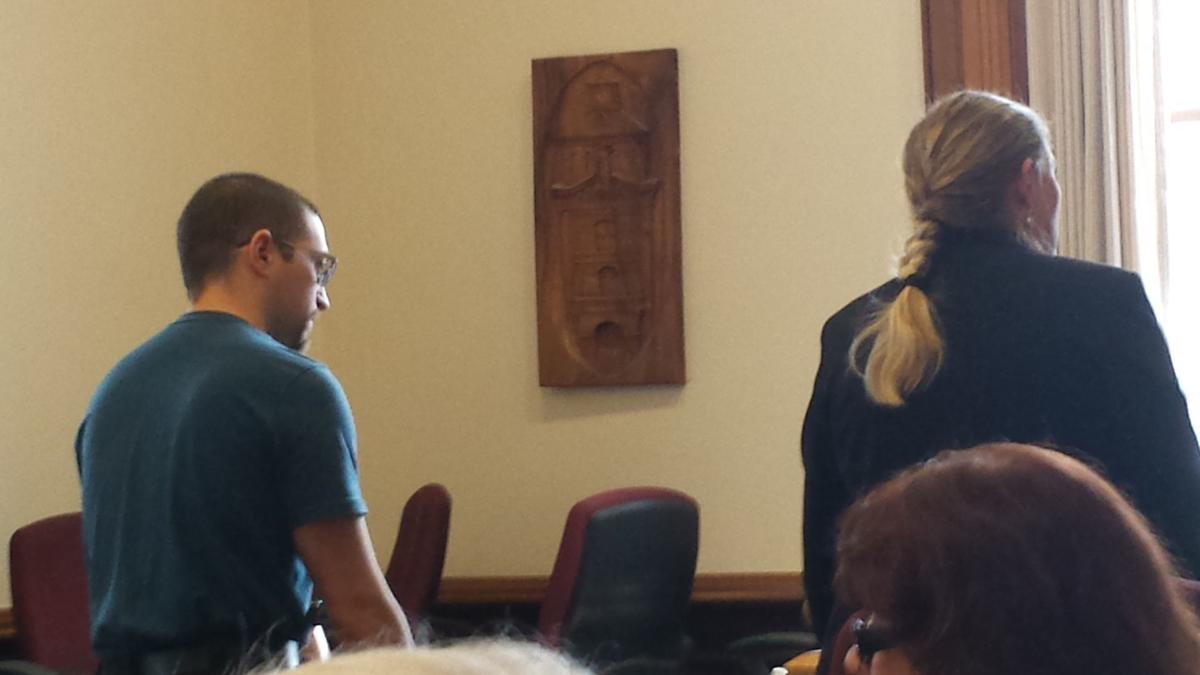 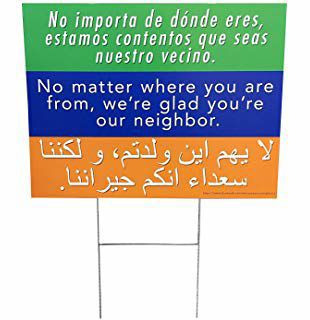 Oswalt is charged with second-degree criminal mischief for allegedly damaging a sign like this one at a Corvallis residence in July 2017.

Andrew Oswalt, a former Oregon State University student who was convicted of a felony hate crime late last year for pasting racist bumper stickers on cars, was back in court on Monday facing a new charge for allegedly damaging an anti-racist sign.

Oswalt, 28, was arraigned in Benton County Circuit Court on a misdemeanor charge of second-degree criminal mischief. He is accused of damaging a sign that said “No matter where you are from, we’re glad you’re our neighbor” in three languages in a July 2017 incident, according to the Benton County District Attorney’s Office.

Oswalt pleaded not guilty to the charge and told Judge Matthew Donohue he intends to represent himself in court.

Deputy Benton County District Attorney Kareem Wolcott is the prosecutor in the case.

Oswalt’s next court appearance is scheduled for 10:30 a.m. on April 22. He asked the judge for permission to appear by telephone, saying he no longer resides in Oregon.

The latest charge is not directly connected to the bumper sticker incident, which took place in June 2017 in the parking lot of the First Alternative Natural Foods Co-op, where a racial justice group was holding a meeting.

A similar message was displayed in the window of one of the cars that was targeted in that incident, Chief Deputy District Attorney Ryan Joslin told the newspaper last week. He said the new charges were filed after prosecutors recently obtained test results from the state crime lab.

Oswalt was convicted of first-degree intimidation and third-degree criminal mischief and was sentenced to 40 days in jail plus three years’ probation in the earlier case.

Following his release from jail in January, Oswalt re-enrolled at OSU, where he had been a graduate student in chemistry and had worked as a teaching assistant.

After court on Monday, however, he said he had been suspended by OSU for his earlier conviction and is now living in Washington state. He declined to say what city he now calls home.

Oswalt said OSU officials suspended him because of his criminal conviction in the bumper sticker incident, citing a provision of the student conduct code.

Oswalt said he was given a hearing, but his arguments were disregarded and he decided not to appeal.

“They categorically refused to review any of the particulars of my conviction,” he said.

Oswalt added that he has not set foot on campus since his suspension for fear he might be arrested for trespassing.

“I wasn’t going to let them use that as another excuse to jail me,” he said.

Steve Clark, the university’s chief spokesman, said could not discuss student disciplinary matters, but he confirmed that Oswalt was no longer enrolled in or employed by Oregon State.

The OSU student conduct code prohibits both discriminatory harassment and criminal activities and can be applied to off-campus actions in cases where the alleged conduct “affects a substantial university interest.”

Oswalt’s arrest early last year on the intimidation charge caused a furor on campus, where he faced protests and demands that he be expelled for espousing racist views. Eventually he was ousted from his student government position following a recall vote.

OSU initially barred him from campus, then allowed him to return after he agreed to have no contact with a student who had identified him as a suspect in the intimidation case.

His landlord went to court in an effort to boot him out of his off-campus apartment, where he had displayed a Confederate battle flag in a window facing OSU’s black student cultural center.

Oregon law says a tenant can be evicted for actions that are “outrageous in the extreme,” but the eviction complaint was denied by Judge Donohue, who said the landlord’s notice to Oswalt was too vague.

An Oregon State University graduate student who was convicted of hate crimes has re-enrolled at the university following his release from jail.

Police have executed additional search warrants in the case of an Oregon State University student charged with hate crimes, according to the p…

Oregon State University graduate student Andrew Oswalt, who is facing prosecution on hate crimes charges, has been recalled by a vote of stude…

Police arrested Andrew Oswalt last year on the University of Oregon campus for a weapons charge while he was in the company of a group of men,…

An Oregon State University student has been arrested for allegedly placing racist stickers on cars outside a Corvallis co-op in June.

Oswalt is charged with second-degree criminal mischief for allegedly damaging a sign like this one at a Corvallis residence in July 2017.