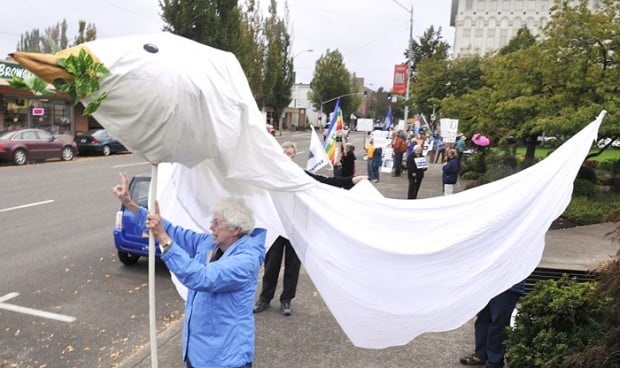 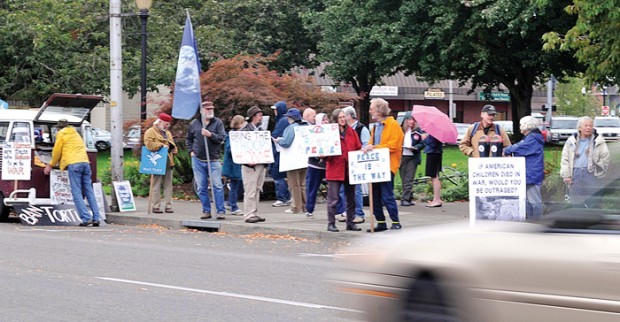 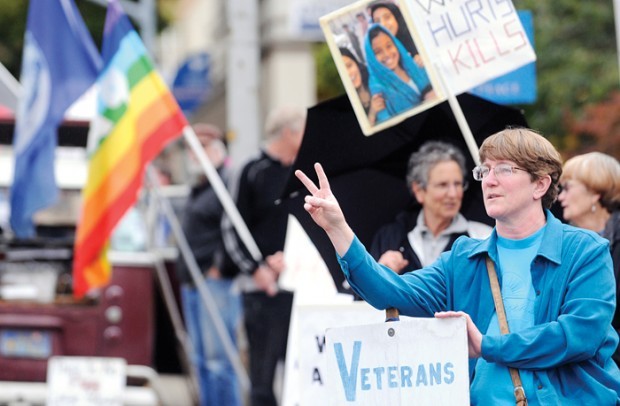 Karen Phelps holds her Veterans for Peace sign Thursday evening in front of the courthouse. Phelps has held the same sign for around five years. (Jesse Skoubo/Gazette-Times)
By Rachel Beck, Gazette-Times reporter

"This is dedicated to all of you, for all your hope and patience."

Valerie White gave that dedication to the 40 or so people gathered in front of the Benton County Courthouse on Thursday evening; then she led the "Raging Grannies" in song.

"We never thought we'd get this far," said Ed Epley, who has been going to the vigil nearly since the beginning.

As he gathered handmade signs from his van to hand out to other participants, he reflected on what motivated

people to show up to the anti-war vigil, day after day.

"Mainly the purpose we've had out here is to let other people in the peace community know that they're not an isolated protest; that there's a lot of community support for peace, for working to stop the war," he said.

No single organization sponsors the vigil. Epley said that as time went on, there was a need to form a contact for the vigil, so Corvallis Alternatives to War was founded. He is confident the vigil will see its 10th year. But he is hoping it won't be there 10 years after that.

"I don't think the country can take 10 more years, either with the policy of war, or economically," he said. "I think it's a pretty significant contributor to the economical situation that we're in."

Participants say there have been at least two people at the vigil every day since Oct. 7, 2003. But Thursday's vigil was out of the ordinary.

Leah Bolger of Veterans for Peace presided over a table where people could write postcards to politicians or send notes of support to Bradley Manning, the U.S. soldier who has been jailed amid accusations that he leaked confidential information about the Iraq war to Wikileaks.

"We think he's a hero," Bolger said. "And exposing war crimes is not a crime."

She also shared the story of a group of boys living in an orphanage in Afghanistan, known as Afghan Youth Peace Volunteers. Bolger spoke with them by phone Wednesday afternoon (the morning of Oct. 7 in Afghanistan), and they asked if there were events in the U.S. to commemorate the ninth anniversary of the invasion of their country.

"I told them about this vigil that's been going on every day for nine years," she said. "I think that really gives them some hope."

Another big push Thursday was to get signatures on a petition to repeal the Authorization for Use of Military Force that was signed shortly after Sept. 11, 2001.

Several participants said they were motivated to join the vigil simply to show what they believe in.

"We've been against it since the beginning, and we continue," said Jeanne Raymond, a Corvallis city councilor. "We want our young people home."

"It's very easy to drive by this building and not even think about (the war), but when they see us, they have to acknowledge it's going on," she said.

Another long-time vigil attendee, Bill Glassmire, wants Corvallis to be an exception to that mindset.

"I hope we can build a community here in Corvallis that has some features of reconciliation and nonviolence," he said.

Micheal Creighton of Corvallis was sick the first week of the vigil in 2003, but he has showed up frequently ever since.

The fact that nine years of war have gone by is "pretty depressing," he said. But it hasn't dampened his desire to show his support of peace.

"I think about all the people that are getting killed," he said. "There's not much I can do, but I can stand and say I disagree with what's going on. So I do this."

A property in North Corvallis will be the site of a new jail and other justice-related facilities, Benton County leaders decided Friday, Jan. 21.

Almost 500 people have signed. Here are their concerns.

Linn County District Attorney Doug Marteeny has filed a lawsuit against Gov. Kate Brown challenging her use of clemency orders to grant nearly…

Public members in attendance got into a shouting match with school officials.