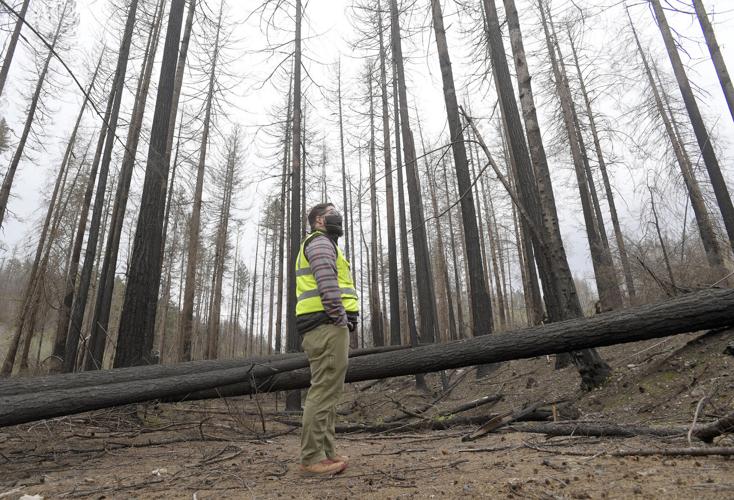 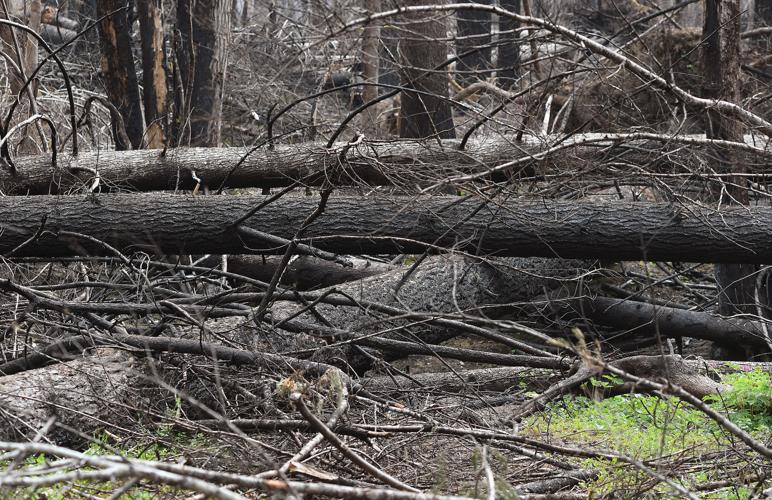 Trees cross a trail that leads to the river at Salmon Falls Park. 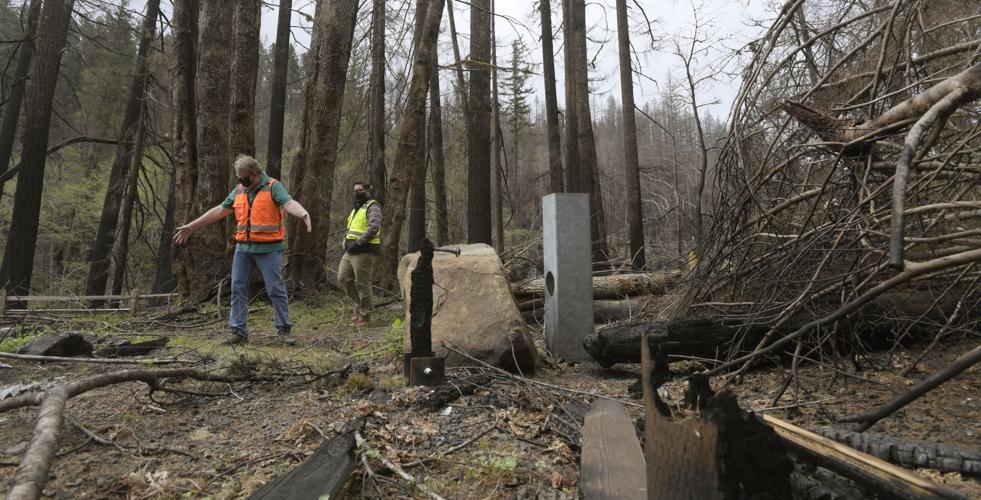 Russ Dilley, Marion County parks coordinator, shows the area where a life jacket kiosk was destroyed by the fire. 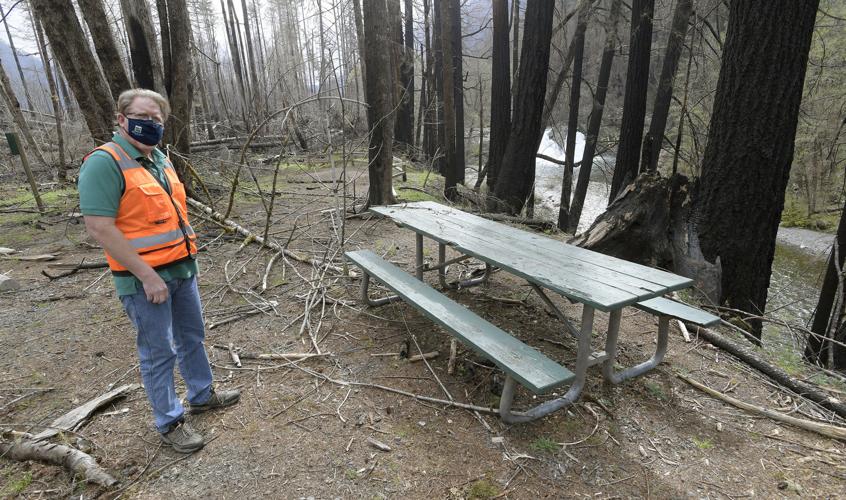 Russ Dilly, Marion County parks coordinator, shows one of the few things that survived the fire in the park, a picnic table. 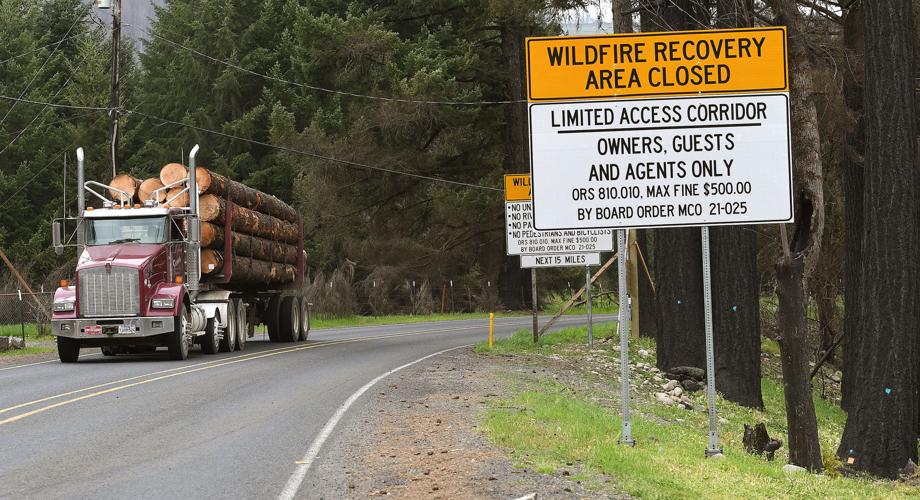 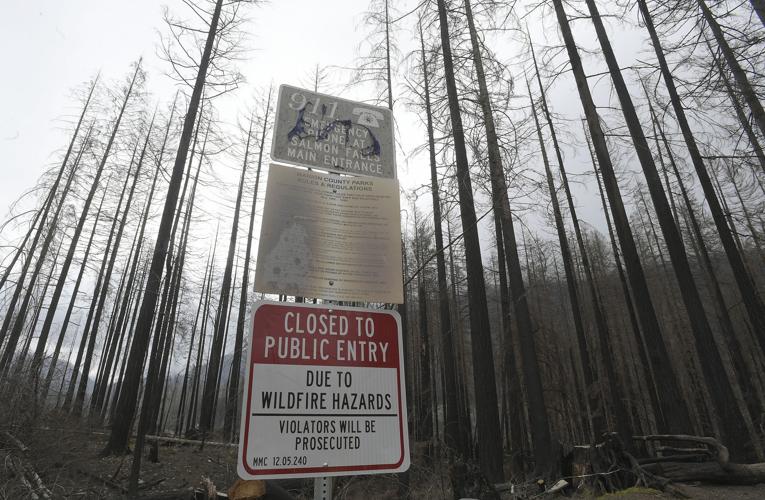 More than 80 percent of the trees in Marion County's Salmon Falls Park will have to come down after they were destroyed in the Beachie Creek Fire. 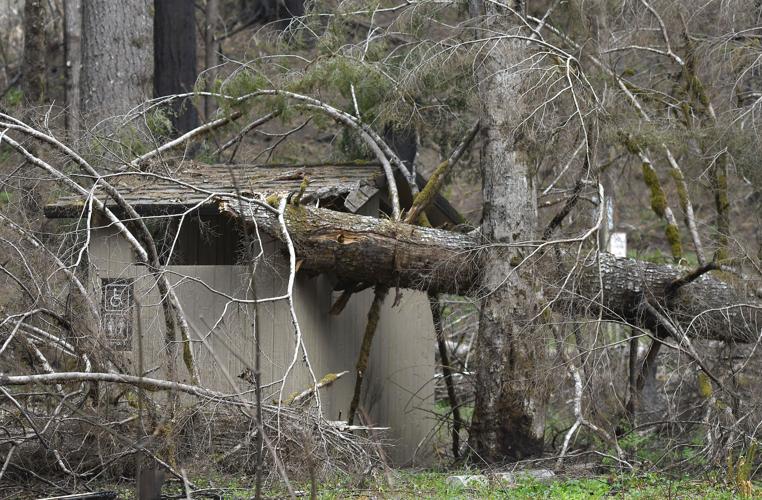 Blow downs including a tree that crushed an outhouse at Salmon Falls were from the windstorm that preceded the firestorm during the Labor Day weather event.

While county parks in Linn County largely survived the fire damage from last summer, other area parks were hit much harder, leading to closures of some of Oregon’s most popular natural gems. One of the areas most affected by the 2020 Labor Day fires was the Opal Creek Wilderness, which is completely closed to the general public.

Not only is access limited due to burned bridges and downed trees along the road to the trailhead, the recreation areas themselves still have hazardous conditions that mean they’re unsafe for normal activities. A trip to Salmon Falls County Park on Thursday revealed that downed trees and dead standing timber were indeed all over.

An information kiosk that used to sit there was burned and a life preserver station was destroyed. A wooden staircase built five years ago that led to the Little North Santiam River was also damaged, making river access from the park impossible.

Other areas of the Opal Creek Wilderness also were affected and employees with the U.S. Forest Service describe truly hazardous conditions there.

“There are a few bridges out along the access road that we’re going to begin work on this summer,” said Joanie Schmidgall, public affairs officer with U.S. Department of Forestry’s Sweet Home Ranger Station. “There are still numerous hazards in the areas.”

She described trying to go to Henline Falls, several miles west of the Opal Creek Trailhead, with other forest rangers several weeks ago. The group ran into roadblocks and many standing dead trees that could topple or lose limbs at any moment.

“We only made it to the Willamette National Forest boundary before turning around,” she said. “It felt really unsafe.”

As such, recreation sites in this area, across federal, state and local agencies, are closed to the general public.

“All of North Fork Road is now closed by (Marion County) board order,” said Marion County Parks director Russ Dilly. “The only people who can go up there are residents (and their guests), government agencies and contractors. We want to give people a chance to rebuild what they lost out there.”

The task of cleaning up the debris will take months, possibly years in some places. It will require a multi-agency effort between Marion County Parks, the Oregon Department of Transportation, and federal emergency assistance funding.

ODOT has already been doing a lot of clearing work along Highway 22, and Dilly said that Marion County already has reached agreement with the state to do much of the clearing along North Fork Road, gateway to many of the top attractions.

The damage is so severe in some places, such as at Bear Creek, that nearly every tree will have to be cleared out, Dilly said. While this change in the landscape will undoubtedly complicate recreation, it may also provide a chance to reconfigure the parks and alter them for different uses.

At Bear Creek, officials say the clearing out of trees will make more space for RV camping there.

“With a blank slate, we’re going to reconfigure the campsites that are there,” Dilly said. “We’ll add some RV sites and reconfigure the existing campgrounds so that it makes the most sense for how to utilize that space out there.”

Thanks to an interactive map, made possible by collaborative efforts from every government agency affected by the 2020 wildfires, Oregonians can get a pretty comprehensive look at what’s open and what isn’t. The map is also a way of tracking the patchwork destruction of the blazes months after the fact.

In Linn County, all of the recreational closures are at areas controlled by state or federal agencies.

Nearly every recreation site near Lyons, Mill City, Gates, and Cascadia is closed. The Phantom Bridge Trail is currently inaccessible since wildfire damage has cut off access to the roads.

Surprisingly, some campsites at the Detroit Lake State Recreation Area are open and more are scheduled to open later in the spring and summer.

Most of the sites that have remained open are overlooks and day use areas, like the Mongold Day Use area that contains the only boat access ramp to Detroit Lake.

The mosaic pattern in which the Beachie Creek, Lionshead and Holiday Farm fires burned means that the interactive map is useful for finding patches of forest that were untouched. On the east side of Highway 22 near Marion Forks, for example, the fires inched down enough to close the Marion Forks campground and the Minto Mountain trailhead. Those may reopen this year, but a firm status couldn't be confirmed by forestry officials. The lands directly to the west, heading towards Three Pyramids and Crescent Mountain, remain open.

Troy Shinn covers healthcare, natural resources and the Linn County government. He can be reached at 541-812-6114 or troy.shinn@lee.net. His can be found on Twitter at @troydshinn.

Polk and Benton counties have been pegged for wildfire preparedness work thanks to funding from the Oregon Legislature. The Oregon Department …

Reforestation efforts are already underway in some parts of Oregon’s forests that were affected by the Labor Day fires last year. While tens o…

In the midst of calamity, even the smallest stroke of luck can be a big break. While nearly the entire town of Detroit was leveled by the 2020…

Preservation work at the Longbow Organization Camp near Cascadia is keeping the nearly century-old site looking like new. The camp, built by t…

A particularly dry winter and spring is leading to low water levels in the Willamette River and, by extension, all the tributaries and reservo…

What can Americans do about far-right extremism?

Trees cross a trail that leads to the river at Salmon Falls Park.

Russ Dilley, Marion County parks coordinator, shows the area where a life jacket kiosk was destroyed by the fire.

Russ Dilly, Marion County parks coordinator, shows one of the few things that survived the fire in the park, a picnic table.

More than 80 percent of the trees in Marion County's Salmon Falls Park will have to come down after they were destroyed in the Beachie Creek Fire.

Blow downs including a tree that crushed an outhouse at Salmon Falls were from the windstorm that preceded the firestorm during the Labor Day weather event.