Here is a look at Highway 99W in South Corvallis. State transportation officials are working on a corridor study that aims to improve safety on the stretch of road. 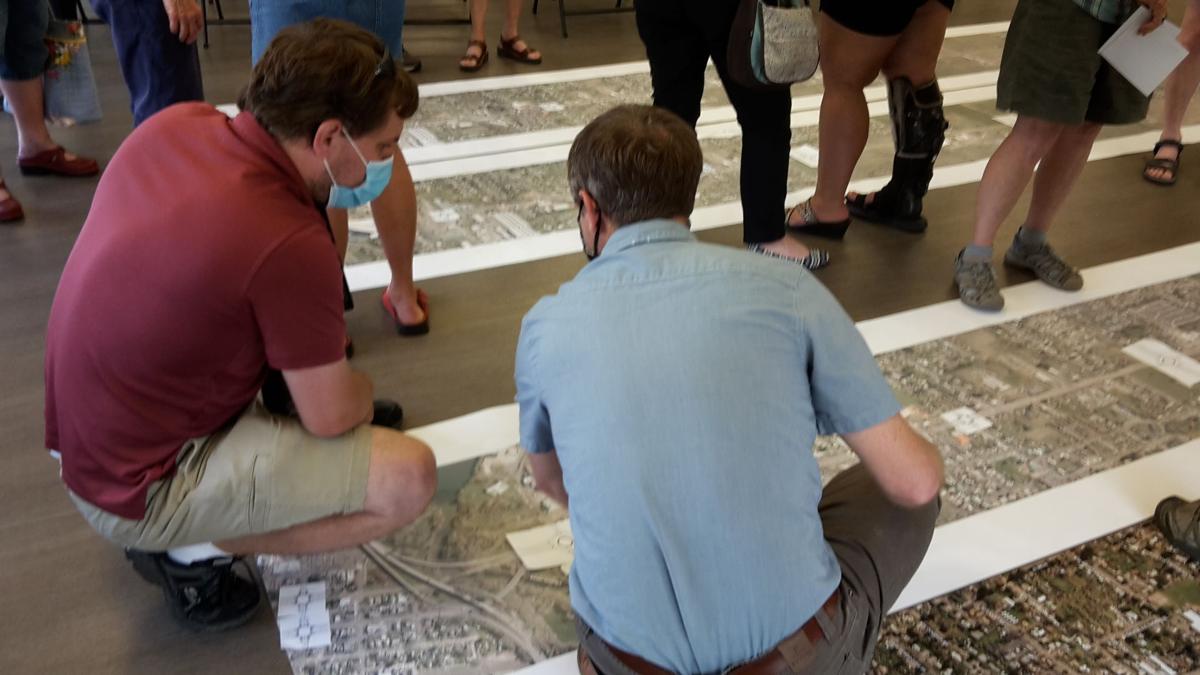 Ward 9 Corvallis Councilor Andrew Struthers, left, confers with James Feldmann of the Oregon Department of Transportation during a Wednesday night forum on Highway 99W safety. The pair were looking at design charts developed at a workshop on Tuesday.

Oregon Department of Transportation officials and their consultants unveiled some early conceptual designs that might be part of the ultimate plan for Highway 99W in South Corvallis at a Wednesday public forum at the Tunison Community Room.

All three designs that were spread on the floor of the room included roundabouts. And none of the questions asked of the consultants and ODOT project manager James Feldmann concerned whether the roundabouts were a good idea. There were questions about how roundabouts would dovetail with other pieces of infrastructure such as bike lanes and pedestrian amenities … but no one stood up and said “Death to Roundabouts!”

There was significant public opposition leading up to Benton County’s 2015 completion of a roundabout at Southwest 53rd Street and West Hills Road. People seem to have adapted to that one OK, as well as the three roundabouts in nearby Albany.

“Highly likely,” said one Corvallis councilor when asked if roundabouts seemed a probable outcome of the Highway 99 work.

The consultants noted the possibility of roundabouts at both ends of South Corvallis to serve as "gateways" to South Town, although they also noted that there is more wriggle room and open space to install roundabouts at the south end of the corridor than in the north.

The session, which included perhaps 40 people through its two-plus hour run, brought out the largest number of Corvallis councilors for any non-City Council function in recent memory. Seven of the eight sitting councilors were on hand as well as a county commissioner, an ex-councilor, four city of Corvallis officials and six more from ODOT or the Kittelson and Associates consultancy which is working with the state on the project. There is clearly strong public interest in the project.

During the first hour, as consultants, councilors and community members put their heads together above the design charts and sprayed questions in all directions, the chatter produced such a din that some participants took to the 90-degree heat outside to save their ears.

The consultants then went through 30 minutes of slides before taking questions from the audience as well as those monitoring the session online.

ODOT hopes to adopt the plan by the winter of 2022, with the time between devoted to consideration of alternatives and plan development.

“I’m excited to see this work being done,” said Ward 9 Councilor Andrew Struthers, who added that he is hopeful that matters can move forward quickly “so we can start talking about funding.”

Bicycle safety advocate Jay Thatcher said he was “heartened” to see some of the concepts in the ODOT designs. “I think that they may bring greater awareness of the challenges of safety and slowing the speed on (the highway).”

Highway 99W (also South Third Street) is the main route into downtown from South Corvallis and also a major artery for freight and commercial travel. One of the drivers of ODOT’s two-year safety study is that the section of road has been the scene of the deaths of two cyclists and one pedestrian since 2018.

The consultants also unveiled an array of possible approaches to the “cross-section” of the roadway, showing how much of the 90-foot width of the right of way on Highway 99 would be used for bike lanes, travel lanes, center turn lanes, etc.

The consultants also had a “Cadillac” plan for a 100-foot or perhaps wider cross section, but it seems likely that that approach would work better with new development. It’s hard to see how you could carve out that much extra right of way on Highway 99 between Western Boulevard and Airport Road, the area covered by the ODOT study.

The Oregon Department of Transportation is planning a virtual open house on the Highway 99W safety project from Aug. 20-30 as well as community tabling events tentatively set for Aug. 23-27. To view the project webpage go to https://www.oregon.gov/odot/projects/pages/project-details.aspx?project=R2-Plan-01 on the ODOT site.

Big political names met in a strip mall parking lot along one of the most dangerous stretches of highway in Oregon on Wednesday. The purpose o…

Corvallis Ride of Silence set for May 19

Corvallis area bicycle safety advocates have scheduled their annual Ride of Silence for Wednesday, May 19.

Corvallis on verge of grant for Tunison neighborhood trail

Another piece of infrastructure that will take cyclists and pedestrians off of busy Highway 99W in South Corvallis is gaining momentum.

The Corvallis City Council has named a new section of multi use path after a cyclist who died in a Highway 99W crosswalk in 2018.

Here is a look at Highway 99W in South Corvallis. State transportation officials are working on a corridor study that aims to improve safety on the stretch of road.

Ward 9 Corvallis Councilor Andrew Struthers, left, confers with James Feldmann of the Oregon Department of Transportation during a Wednesday night forum on Highway 99W safety. The pair were looking at design charts developed at a workshop on Tuesday.