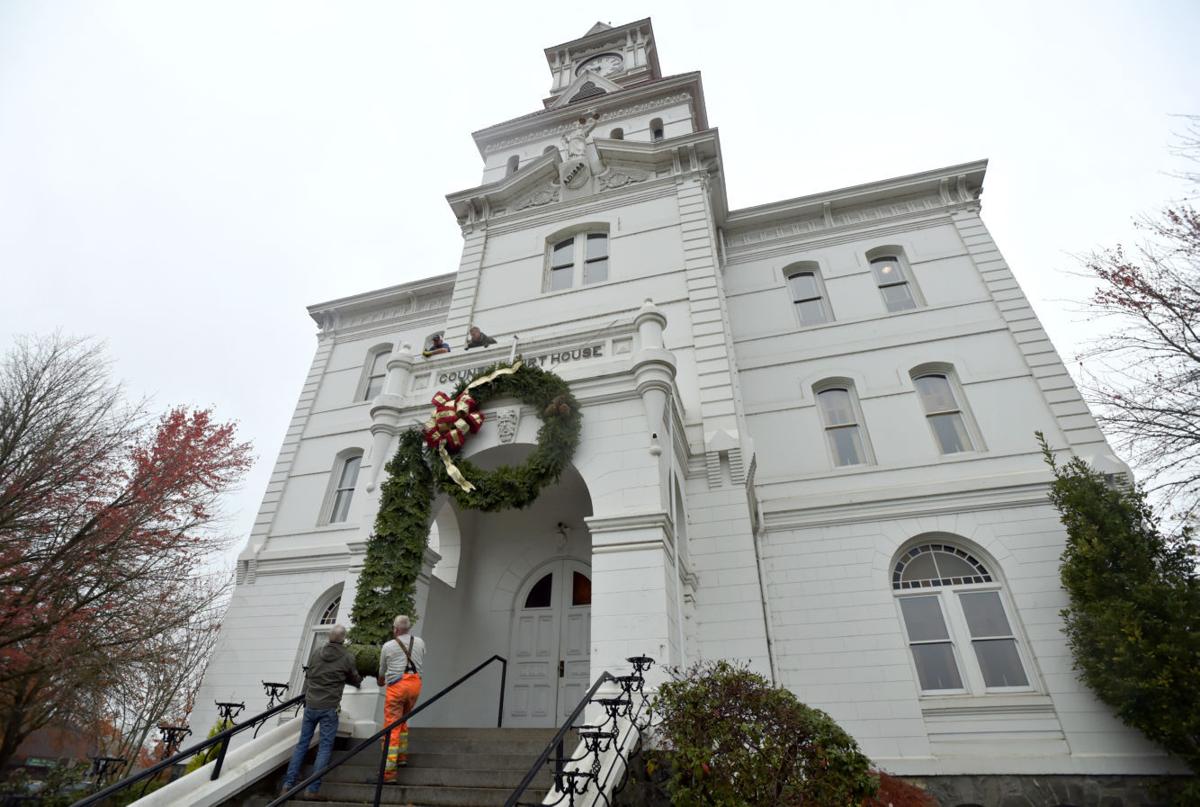 Workers put up Christmas decorations at the Benton County Courthouse in November. 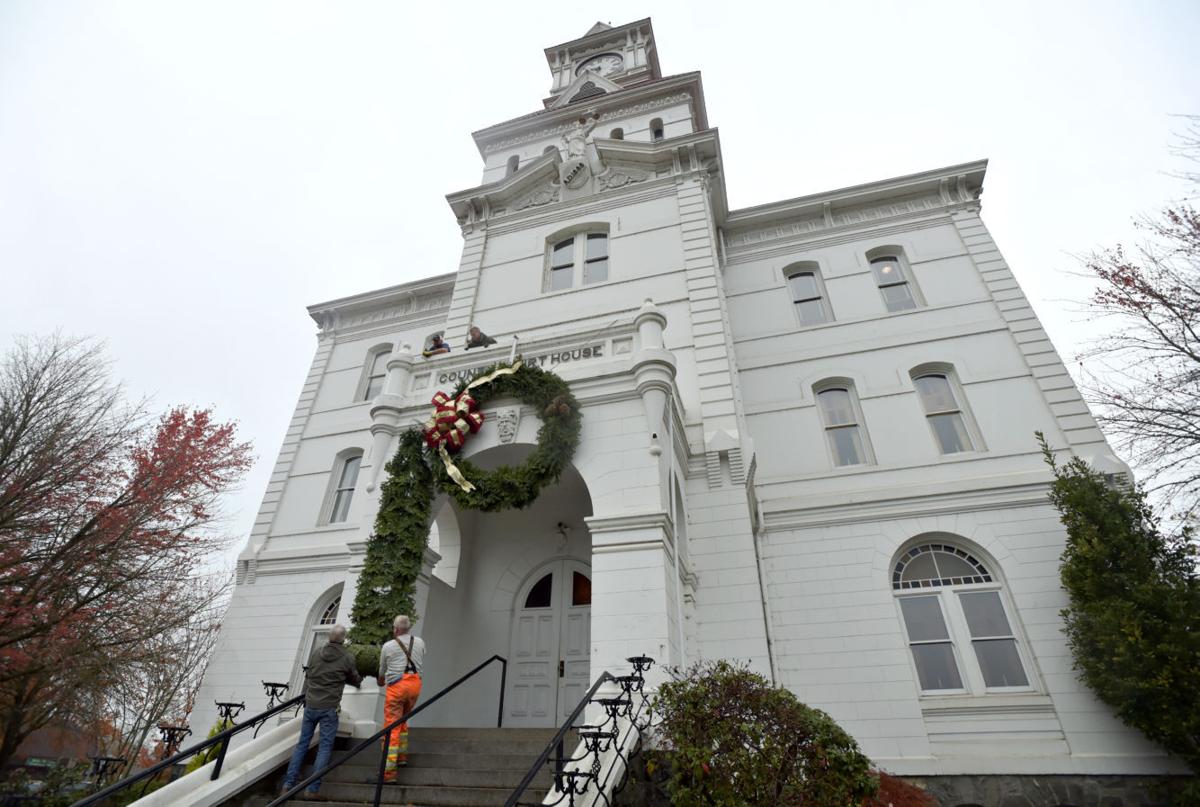 The Benton County Courthouse has stood tall and proud in downtown Corvallis since 1889, but the whole thing could come toppling down in an earthquake — and the cost of shoring up the iconic structure could be prohibitive.

That’s the gist of a consultant’s report presented to the Benton County Board of Commissioners during a work session on Tuesday.

The study, commissioned at a cost of $40,000 from Miller Consulting Engineers of Portland, found that the historic structure was built to stand up to high winds but not necessarily to the earth movement produced by a significant earthquake.

“Subsequently, the building elements will begin to be damaged during the seismic event and the building may collapse depending on the seismic hazard’s direction (where the earthquake originated), intensity (the severity of the ground movement) and duration (how long the event lasts),” the report states.

The report goes on to outline three options for seismic retrofits to make the courthouse more earthquake-resistant:

Basic performance objective: Occupants should be able to safely exit the courthouse following a moderate earthquake, but the building probably would not be safe to reoccupy until repairs were made. Cost: $6.7 million.

Enhanced performance objective: The building could continue to be used after a moderate earthquake, though some repairs might still be needed. Cost: $9.1 million.

Limited performance objective: This would aim to keep the courthouse from collapsing in the event of a major earthquake (such as the magnitude 9 Cascadia Subduction Zone tremor scientists say could happen in the next several decades), but the building would likely be severely damaged and not fit for continued use. Cost: $10.9 million.

Each of those options would involve significant modifications to the existing structure, although the engineers say most of the work could be masked to preserve the building’s historic appearance. Each would also involve relocating courthouse employees for one to two years during the construction process. It’s not clear where those employees would go or how much it would cost to house them in temporary quarters.

The report prompted some soul-searching among the county officials present. While acknowledging the iconic status of the courthouse, whose image appears on the county seal, some wondered whether the expense could be justified given the 127-year-old building’s functional limitations and the county’s other facilities concerns, from deferred maintenance to an overcrowded Health Department building to an undersized jail, the subject of a failed bond measure in the November election.

Commissioner Jay Dixon noted that some state funding might be available for seismic upgrades but that other counties might have a better claim on those limited resources.

“At least two-thirds of the courthouses in the state have significant issues,” he noted.

“The likelihood of us getting money for replacement of a courthouse is very, very far off in the future,” said Dennis Aloia, the county’s chief operating officer. “It’s kind of made me look at the issue in a different way. To spend $11 million to $12 million and displace people for two years to protect people in an earthquake but not have a usable building afterwards — is it worth that kind of money for that purpose?”

Commissioner Annabelle Jaramillo suggested getting the public involved in a discussion of the county’s overall facilities needs, including whether to invest significant funds into earthquake-proofing the courthouse.

And Commissioner Anne Schuster brought up some of the county’s other spending decisions, including one made earlier in the work session (which she opposed) to hire a consultant to begin a public outreach project to explore possible routes for a bike path between Corvallis and North Albany along the Highway 20 corridor.

“We have a lot of things we need to be doing in this county, and we’ve got to start prioritizing,” she said. “The public health building is number one in my mind. I think we need a bigger discussion.”

Jaramillo replied that the goal of a bike path and facilities improvements are not mutually exclusive.

Despite that difference of opinion, there was general agreement that a community discussion of county facilities needs is long overdue.

“We’ve got lots of building issues that are before us and, frankly, they’ve all been on the back burner because of the jail issue,” Aloia said.

“I don’t think we can continue to wait. We have to come up with a plan, and we have to involve the public in this.”

The commissioners took no action Tuesday regarding the future of the courthouse. The next step in that conversation will come on March 10, when Public Works Director Josh Wheeler plans to meet with representatives of the District Attorney’s Office, Benton County Circuit Court and other agencies that work in the courthouse to discuss how the potential seismic upgrade project might affect their operations.

Hemp compounds can help prevent the virus that causes COVID-19 from entering human cells, according to a study led by Oregon State University …

Editorial: Communities must do more to protect against slumlords

Newsroom hires at our company have received crucial advice for years: When you move to town, don’t get an apartment or house with a red door.

COVID-19 is to blame. Here's how many students and staff members are impacted by the disease.

What comes next in NY's investigation of Trump

Workers put up Christmas decorations at the Benton County Courthouse in November.