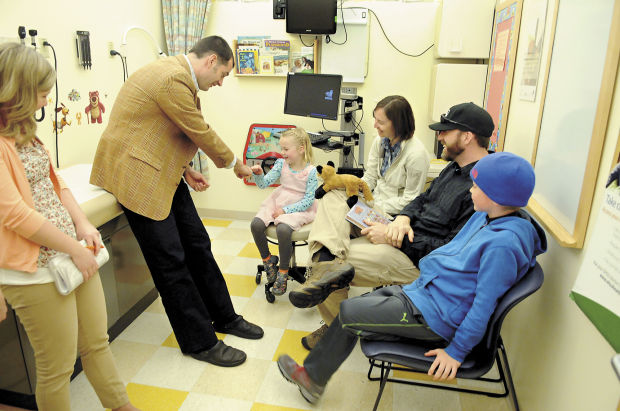 Dr. Carter Wray, second from left, shares a fist bump with Corvallis resident Nora Brekken, 5, at OHSU Doernbecher Children's Hospital in Portland on Tuesday morning. Also pictured are registered dietician Audrey Easttum, from left, Nora's parents, Christy Anderson Brekken and Ted Brekken, and her brother, Anders Brekken, 9. The family was at the doctor's office to talk about the logistics of safelyÊweaning Nora off of the ketogenic diet, which is attributed to keeping her seizures at bay for two years as of last week. (Amanda Cowan/Mid-Valley Sunday) 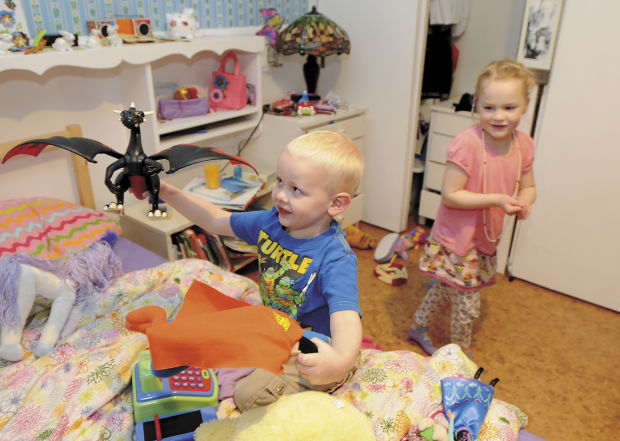 Jaron Swick, 4, of Philomath, left, uses his imagination to bring a dragon to life while playing with Nora Brekken, 5, of Corvallis Wednesday evening. Both children are on a ketogenic diet to keep seizures at bay. (Amanda Cowan/Mid-Valley Sunday) 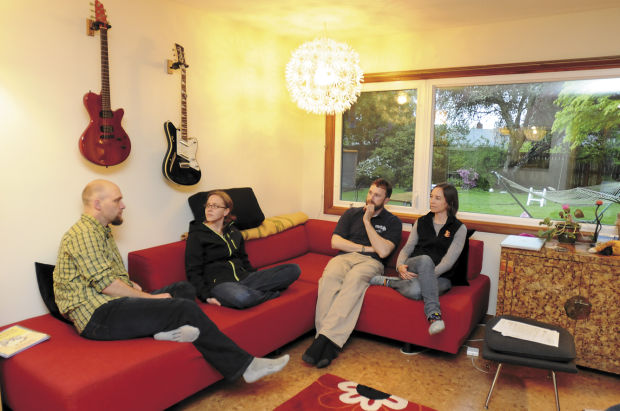 Jason and Amanda Swick of Philomath, from left, share their experiences with the ketogenic diet with Ted Brekken and his wife, Christy Anderson Brekken, on Wednesday evening in Corvallis. (Amanda Cowan/Mid-Valley Sunday)

“Thirty-five and a hundred years ago!”

That was the answer Nora Brekken gave when her pediatric neurologist, Dr. Carter Wray, asked her parents how long it’s been since she had a seizure.

The precocious 5-year-old playfully swung her feet and grinned at Wray, who sat beside her on an exam table at Doernbecher Children’s Hospital at Oregon Health & Science University in Portland.

Nora’s appointment Tuesday began like most others since she became one of Wray’s first patients in Oregon’s first ketogenic diet program nearly 2-1/2 years ago.

He checked her eyes, ears and throat, and tested her reflexes and coordination.

But after that, it was uncharted territory. The doctor and Nora’s parents — Ted Brekken and Christy Anderson Brekken of Corvallis — began hashing out the details of how to wean Nora off of the high-fat, low-carbohydrate diet that has kept her seizures at bay for two years.

The story of the diet that stopped Nora’s seizures was published in the Gazette-Times and Democrat-Herald one year ago.

In that time, Nora has grown, learned to read, started kindergarten – and the news of her journey has transformed the life of another child, 4-year-old Jaron Swick of Philomath, who has now been seizure-free for five months.

The ketogenic diet, in which roughly three-quarters of calories are delivered in the form of fat in a perfectly calibrated ratio with carbs, protein and fiber, has worked wonders for both children after seizure medications failed and surgery could not correct their form of epilepsy.

As Nora’s parents nervously transition her out of the diet — to see if her brain has developed beyond what was causing the seizures – Jaron’s parents anxiously await the day when they can do the same.

In March 2013, Jaron was hit with seizures that caused his body to go limp and convulse. His doctor prescribed a new seizure medication on top of his existing one.

Seizures occur when clusters of nerve cells in the brain signal abnormally, and children experience them in different ways and for different reasons. The cause of Jaron’s seizures was unclear, so surgery couldn’t correct it.

Not long after the new seizures last March, he began exhibiting another kind of seizure. He wore a bike helmet everywhere and couldn’t climb, run or play like other 3-year-olds because his legs would unexpectedly buckle and he would violently hit the ground. The drop seizures lasted only seconds, but the falls left scars where his teeth pierced his bottom lip.

“He had 80 or 90 drops that day,” his mom recalled. “It made his seizures worse and it made him drunk. I didn’t know if he was falling from seizures or falling because he was stumbling everywhere on the drug.”

Medications were not only ineffective, but as his doctor increased the dosage and added them, the drugs caused his hair to fall out and had the potential to damage his liver.

Amanda already had begun researching alternative treatments such as the ketogenic diet, but she didn’t know where to start – until she saw the newspaper article about Nora.

Amanda Swick attributes the timing of last year’s article to a coincidental — or divine — twist of fate.

“This all just fell into place,” she said. “For him to be where he was at with his seizures, for the article to come out – I thought, we have to be moving in the right direction.”

Amanda Swick, a stay-at-home mom, and Jason Swick, campus minister for the University Christian Center, recall members of their church handing them copies of the newspaper the Sunday that the article came out.

When she got home, Amanda immediately contacted Christy Anderson Brekken through her blog, which chronicles Nora’s journey through the ketogenic diet.

Six days later, Amanda met with the Brekkens, where she was given ketogenic cookbooks, a digital scale that measured to the nearest tenth of a gram and advice to meet with Wray at Doernbecher .

“They showed me their spreadsheet and how they calculate stuff out, their scale and their routine of how they plan out their meals for Nora,” Amanda said.

Before she could even stop by the grocery store after the visit, she received an urgent call from her husband. Jaron was dropping from seizures every two minutes.

“I left their house, we took Jaron to the emergency room, the next day we ended up at Doernbecher (Children’s Hospital) and on Monday we started the diet,” Amanda said.

In the past year, the number of epileptic children in Wray’s dietary patient cohort has grown from about 50 to 150. The children are on the ketogenic diet or less intense versions, such as the modified Atkins diet or the low glycemic index diet.

Because the diet restricts the intake of carbohydrates, the body burns fat for fuel instead of carbs, a process called ketosis. The brain cells are fed on ketone bodies from fat, not on glucose from carbs. For an undiscovered reason, ketosis has an anti-seizure effect.

“Diet is really the most effective option for the kids who aren’t candidates for seizure surgery,” Wray said.

The dietary treatment for childhood epilepsy has been documented since the 1920s, but the advent of improved drugs and the sheer difficulty of implementing the diet caused the treatment to wane in popularity until the past couple of decades.

“More than half of the kids who do dietary therapy will have a greater than 50 percent reduction in seizures,” Wray said, “which is particularly good because most of the kids we try are kids who, like Nora, initially were on two different drugs, and she didn’t stop having seizures despite being on both of those drugs. Adding a third drug is unlikely to meaningfully improve seizure freedom.”

Getting off the diet

There is considerably less research on the proper way to wean children off of the diet, Wray said. Statistical analysis shows that if a child is seizure-free for at least two years — through diet or medication — the child has a 50 percent chance of staying that way, Wray said.

Though the odds aren’t terrific, Wray and Nora’s parents believe they owe it to her to not keep her on the diet longer than she needs it. Nora wants more food choices and as she grows older and gains more independence, the diet will become less feasible.

Nevertheless, Christy and Ted aren’t throwing out the jeweler’s scale just yet and Nora won’t see any noticeable change in her diet. At Tuesday’s appointment, they agreed on a slow schedule, where every four weeks she’ll take a step down — eating a few more grams of carbs and a few less grams of fat per day. Eventually, she will be off ketosis.

“At some level, she’s going to flip and her body is going to start burning carbs for energy,” Christy said, “and that will be the big moment — to see if her body can handle that.”

If it doesn’t work, her seizures might return. But, Wray told her parents at the appointment, if she has only two small seizures a week, and it improves her choices and increases lifestyle flexibility, it may be worth it.

“Or it may be easier in her phase of life to go back to drugs,” he said at the appointment, adding: “Hopefully we don’t have to have this conversation.”

The ketogenic diet has kept Jaron’s seizures at bay for five months and, under Wray’s care, Jaron is in the process of being weaned off of his last seizure medication.

“He went from having hundreds of seizures a day to having no seizures at all,” his mother said.

Gone are the days of Jason and Amanda Swick being “helicopter parents,” always hovering around him – ready to catch him anytime he falls and ordering him to sit down while he plays.

Jason no longer has to stay up at night wondering if every sigh or movement coming from his son’s room is a sign of a seizure.

Some changes are afoot for the Brekkens as well. They’re planning a trip to see family in North Dakota this summer, a risk they haven’t taken since Nora began the diet.

On Wednesday, Amanda and Jason Swick brought Jaron and his 6-year-old brother, Josiah, to the Brekken household after the boys’ swim lessons.

As the kids played in another room, the parents spoke of the nuts and bolts of the diet — what brand of cream they use, how they get their kids to take supplements — and of the diet’s results.

Amanda Swick is reminded of those results every time she looks at Jaron’s seizure helmet. She ordered it last August, but by the time it arrived, he didn’t need it.

“It has the mask and it’s black like the Beavers, so now it’s our Beavers football helmet,” she said. “I’m going to take a picture of it as the seizure helmet that I never had to use. I smile at it always.”

To learn about Nora’s diagnosis, her journey on the diet and ketogenic recipes, visit her family’s blog at blogs.oregonstate.edu/modifiedketogenicdietforepilepsy.

Jaron Swick of Philomath joins his brother, Josiah, as well as Nora Brekken of Corvallis and her brother, Anders, as they enjoy some lego play…

Four-year-old Nora finished her salmon sashimi, but then she wanted another piece.

Dr. Carter Wray, second from left, shares a fist bump with Corvallis resident Nora Brekken, 5, at OHSU Doernbecher Children's Hospital in Portland on Tuesday morning. Also pictured are registered dietician Audrey Easttum, from left, Nora's parents, Christy Anderson Brekken and Ted Brekken, and her brother, Anders Brekken, 9. The family was at the doctor's office to talk about the logistics of safelyÊweaning Nora off of the ketogenic diet, which is attributed to keeping her seizures at bay for two years as of last week. (Amanda Cowan/Mid-Valley Sunday)

Jaron Swick, 4, of Philomath, left, uses his imagination to bring a dragon to life while playing with Nora Brekken, 5, of Corvallis Wednesday evening. Both children are on a ketogenic diet to keep seizures at bay. (Amanda Cowan/Mid-Valley Sunday)

Jason and Amanda Swick of Philomath, from left, share their experiences with the ketogenic diet with Ted Brekken and his wife, Christy Anderson Brekken, on Wednesday evening in Corvallis. (Amanda Cowan/Mid-Valley Sunday)