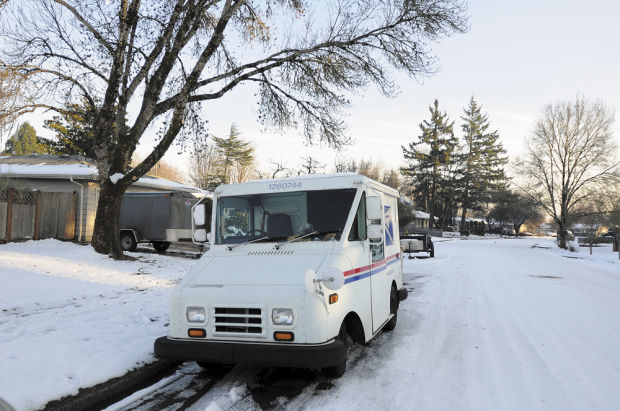 Although postal service trucks such as this one made it to most postal customers despite this week’s snow, hundreds in the hillier regions of Corvallis haven’t had delivery since Dec. 5 due to impassable roads. (Amanda Cowan | Corvallis Gazette-Times) 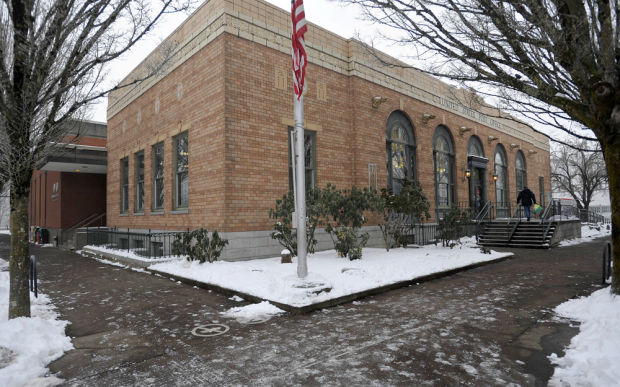 Customers who haven’t received their mail due to delivery problems related to the weather went to the post office on Second Street on Thursday to get it. (Andy Cripe | Corvallis Gazette-Times) 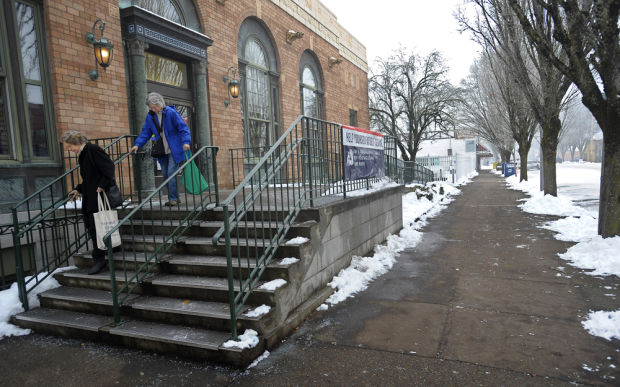 Judy Freeman, left, and Andrea Dailey exit the downtown Corvallis Post Office at 311 S.W. Second St. on Thursday morning. Customers who haven’t received their mail due to delivery problems related to the weather went to the post office on Second Street on Thursday to get it. (Andy Cripe | Corvallis Gazette-Times)

Turns out snow can keep mail carriers from the swift completion of their appointed rounds, and some Corvallis residents are upset that they weren’t told that was the case.

As of Wednesday, 765 Corvallis customers still hadn’t received their mail since Dec. 5, the day before up to nine inches of snow fell on the city — among the heaviest accumulations reported from a winter storm that affected much of the mid-valley and central coast. Thursday’s figure hadn’t yet been computed.

That’s an improvement, Corvallis Postmaster Jami Goodpaster said Thursday: “(Dec. 6), it was half the city.”

She said that mail trucks have rolled each day since then, and carriers have tried each day to make it up the snowy hills. Some have become stuck in the effort.

It wasn’t getting up the hill that was the problem, Goodpaster said, it was getting down. The mail trucks that serve Corvallis have chains, but they are two-wheel-drive rigs that simply aren’t equipped to deal with icy hills. She said tow trucks had to be sent out to pick up the stranded vehicles.

Among the most severely affected neighborhoods were the Witham Hill and North Park areas, where mail service still had not resumed after almost a week.

In their continuing attempt to get out the mail, one carrier broke her wrist, which will put her off the job for up to six weeks. Another fell hard on the ice and suffered injuries, Goodpaster said.

And then there were the phone calls. Dozens of calls came in each day from people demanding to know why the mail wasn’t getting through.

Goodpaster, who is in her third week on the job as Corvallis’ postmaster, said that she has spent a lot of time on the phone talking to people — and not all of them were understanding about the situation. She said only about 30 of them were really angry.

One such call came from Steve Mamoyac, who said he was so concerned that he called “maybe 30 times” before he finally got through. He admits that he was “pretty direct” at that point in expressing his complaints.

He and his wife, Joy Mamoyac, had been watching the mail for important documents they were expecting. He said that he wasn’t sure whether they’d been stolen. What’s more, he didn’t understand why he wasn’t getting any mail.

The Mamoyacs live near where Angelica Drive, Highland Avenue and Walnut Boulevard converge. It’s hilly, but although he doesn’t have tire chains or studs, Mamoyac said he still had no trouble driving around.

“They told me that their vehicles are too lightweight, and when they stop, they can’t get going again.”

Goodpaster said the delivery problems are not unique to Corvallis; Albany and Eugene postal carriers also were having problems delivering to all customers. She said all of the accumulated mail would be delivered as soon as the roads are passable.

In the meantime, anyone is welcome to come down to the main post office at 311 S.W. Second St. and pick up their mail, she said.

Mamoyac said he could understand why it might be tough for the mail carriers to make deliveries; what he couldn’t understand is why they didn’t tell the public about the problems the post office was having.

“It sounds like somebody’s dropped the ball in communication.”

He pointed out that there is nothing on the postal service’s website that indicates the severe winter storm that affected much of the Western U.S. was impacting mail delivery.

Callers to the Gazette-Times wondered why there was no story in the newspaper or notice on the post office’s website about the mail delivery interruption.

Goodpaster said that her primary concern was trying to ensure that the mail was delivered rather than drafting a press release, adding that most such releases come from the Portland office. She said a tally of the missed deliveries was reported each day to postal officials in Portland.

Peter Hass, who is the media spokesman for the Portland office and for all of Oregon, Arizona, New Mexico and part of Washington, is based in Phoenix, Ariz.

Hass said the call from the Gazette-Times was the first he’d heard of any delivery problems in Oregon. He said that he was not advised of any delivery problems in Oregon. He declined to provide contact information for postal employees in Portland who did know about the weather problems and could have posted it to the USPS website. He said those people would have referred any media calls to him anyway.

Hass said he hopes that when people see that roads are closed or impassable, they will realize that is the reason their mail is not coming.

He said the postal service’s weather creed — “Neither snow nor rain nor heat nor gloom of night stays these couriers from the swift completion of their appointed rounds” — is often misunderstood. The slogan is simply something carved onto the post office building in New York City, but actually it isn’t a motto, much less a guarantee.

“Certainly, however, that is our goal,” Hass said.

Theresa Novak is the city editor and opinion page editor at the Corvallis Gazette-Times. She can be reached at theresa.novak@lee.net or 541-758-9527.

The Corvallis School District has a plan to bring students back that includes considerations around safety, health and equity, but when it may…

For the first time in at least two decades, it appears the Benton County Sheriff’s Office will be led by someone from outside the agency’s ranks.

“We have not given up!” said Lyn Larson.

Although postal service trucks such as this one made it to most postal customers despite this week’s snow, hundreds in the hillier regions of Corvallis haven’t had delivery since Dec. 5 due to impassable roads. (Amanda Cowan | Corvallis Gazette-Times)

Customers who haven’t received their mail due to delivery problems related to the weather went to the post office on Second Street on Thursday to get it. (Andy Cripe | Corvallis Gazette-Times)

Judy Freeman, left, and Andrea Dailey exit the downtown Corvallis Post Office at 311 S.W. Second St. on Thursday morning. Customers who haven’t received their mail due to delivery problems related to the weather went to the post office on Second Street on Thursday to get it. (Andy Cripe | Corvallis Gazette-Times)