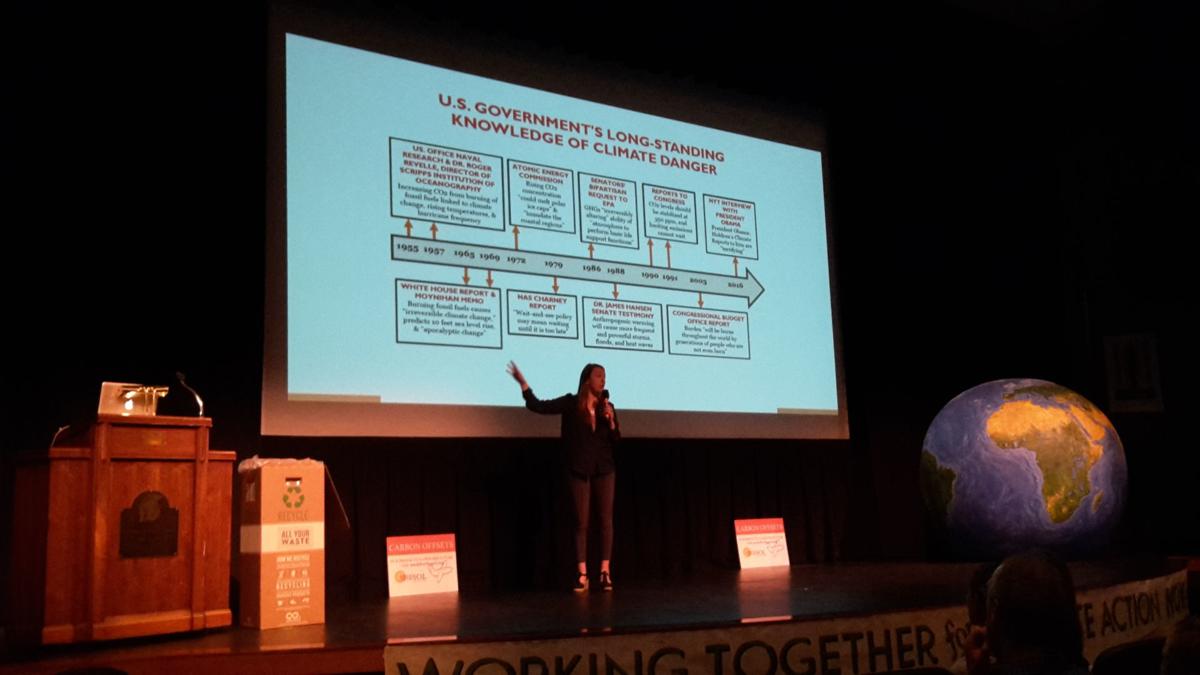 Kelsey Juliana, lead plaintiff in a lawsuit that charges the U.S. government with violating youth rights by not addressing climate change, discusses a timeline showing government statements on climate issues at an event Thursday night at Corvallis High School. 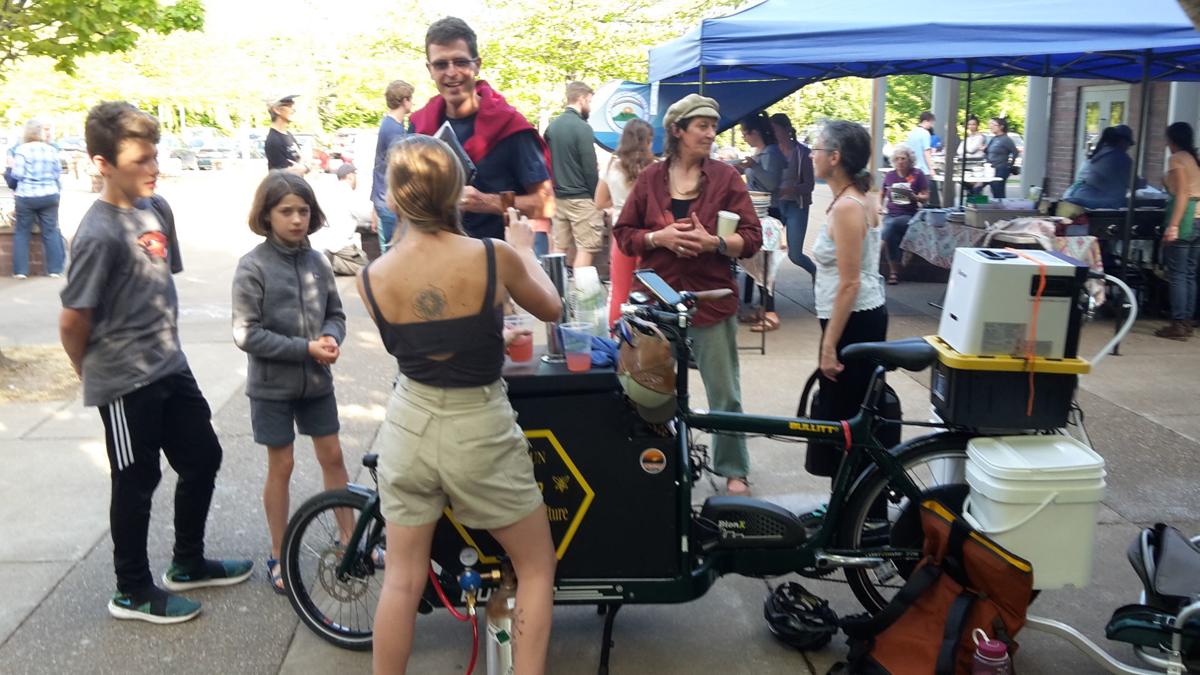 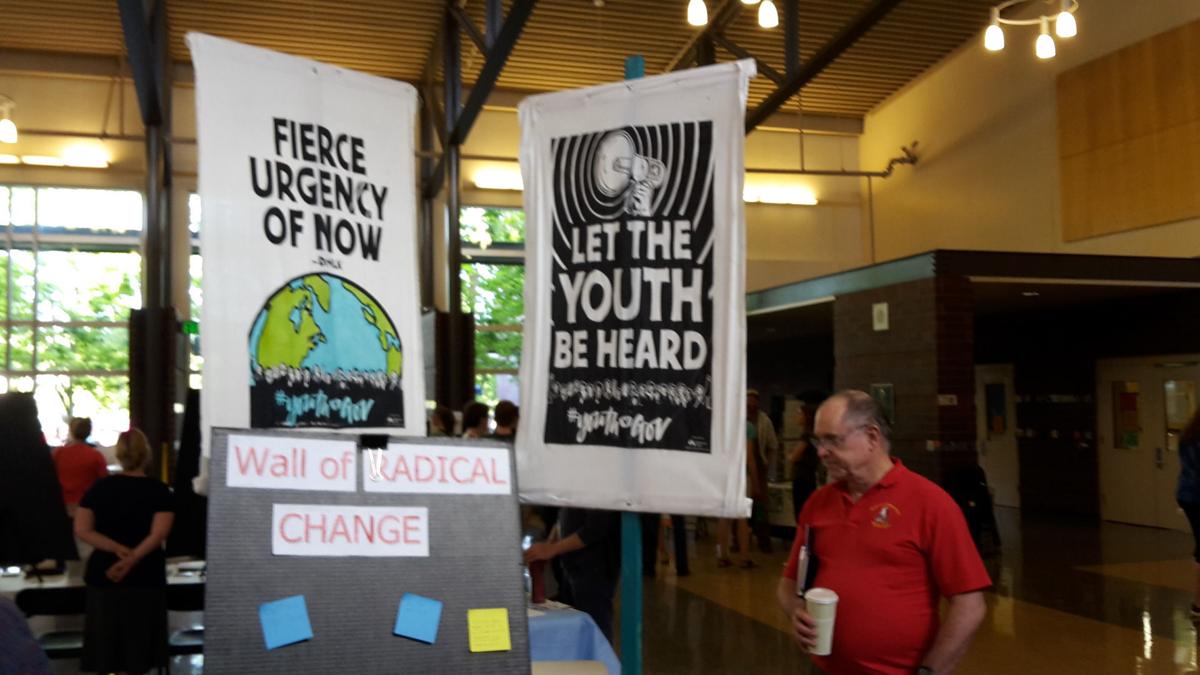 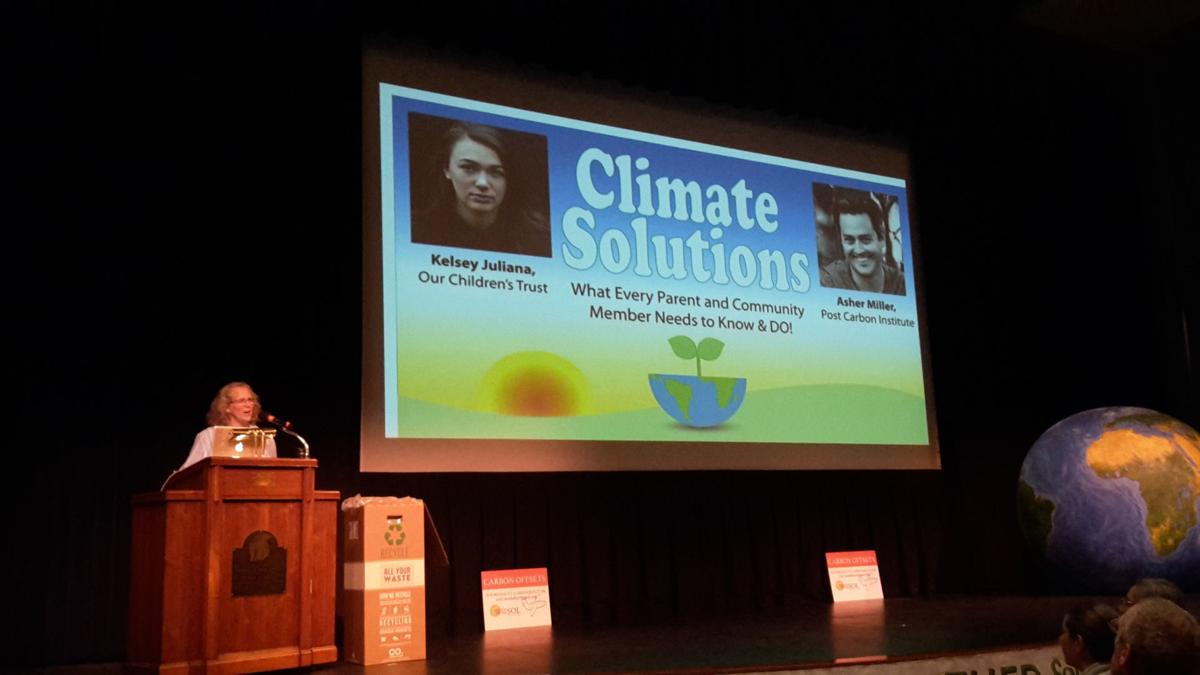 Urgency and the involvement of youth were the key themes of a climate solutions event Thursday night at Corvallis High School.

Kelsey Juliana, 23, the lead plaintiff in Juliana vs. United States, a landmark lawsuit over climate change, received a standing ovation from the crowd of approximately 100 people in the Corvallis High School theater at the end of her remarks.

“The world is looking at us to lead this movement," said Juliana, who will be in Portland on June 4 for oral arguments before the 9th Circuit Court of Appeals. Juliana and 20 other youths filed the suit in 2015, arguing that the federal government violated the youths' rights by allowing activities that harmed the climate.

“After every dismissal and every delay we still show up,” Juliana said to applause from the crowd.

Juliana seemed distracted at times during her presentation as she dashed back and forth between the podium and center stage, changing the order of her PowerPoint slides or remembering that she planned to hang a banner over the podium.

But one particularly effective piece of the presentation was a timeline that showed statements by government officials about the potential threats of climate change going back to the 1950s and the Eisenhower administration.

“This is unacceptable. This is a great injustice,” she said. “My government has failed me. We are being harmed by climate change, and I call on our representatives to represent us.”

At the close of her presentation, Juliana raced up an aisle at the theater. She had to catch a plane to Washington, D.C.

The other keynote speaker at Thursday’s event was Asher Miller, executive director of the Post Carbon Institute and a member of the Corvallis Climate Action Advisory Board.

While Juliana gave the event its focus on youth, Miller, whose voice broke with emotion at a couple of junctures, focused on the urgency, criticizing himself for not doing enough.

“We were working the shallow end of the pool,” he said. “We made top 10 lists of green things you can do to save the planet. Change the way we eat, buy a Prius, put solar panels on the roof, and we would have the problem licked. They were quick fixes, like putting a Band-Aid on a gunshot wound.”

Miller, along with the Post Carbon Institute, moved to Corvallis two years ago “because it is a community more prepared to act on the climate crisis."

“But I put myself first on the list when I say that I am not doing enough. We are failing our kids. We don’t want to say it and we don’t want to hear it.”

“They conserved everything,” he said. “They produced food. People recycled steel, tin and all kids of things. They didn’t say, ‘This is too hard, too much of a hardship.’ They did it.”

Miller also offered a “revised” top 10 list (see https://www.postcarbon.org/act-corvallis/ for the full list) that included shifting personal and household choices. “And if it’s a pain in the butt … good!” he said to audience applause.

Addressing the young people in the audience, Miller said: “I’m sorry. And if you are scared, you have every right to be scared.”

Miller also encouraged attendees to get involved with local organizations, many of whom were present at a fair in the high school commons that preceded and followed the speeches in the theater.

Kelsey Juliana, lead plaintiff in a lawsuit that charges the U.S. government with violating youth rights by not addressing climate change, discusses a timeline showing government statements on climate issues at an event Thursday night at Corvallis High School.