Become a Member
Read Today's E-edition
Share This
Starting a new tradition: Benton fairgrounds manager brings a different approach to the job
0 Comments
Share this
1 of 4 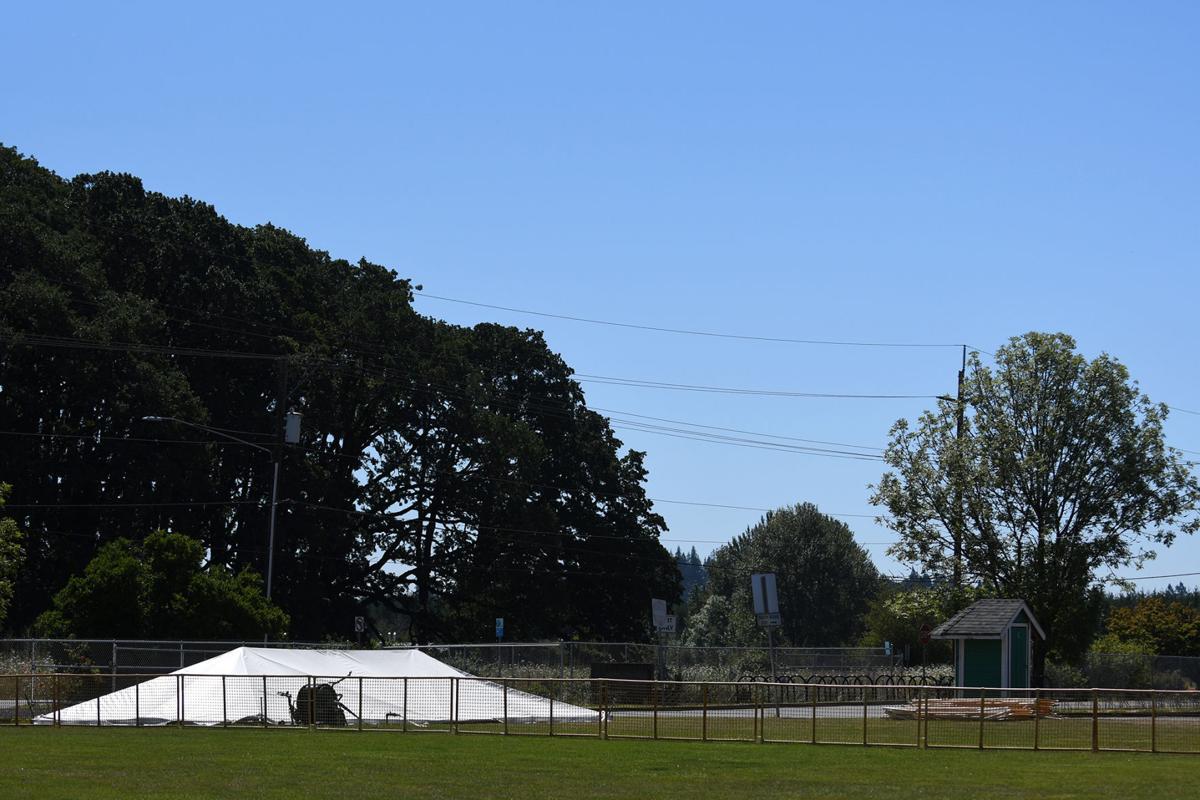 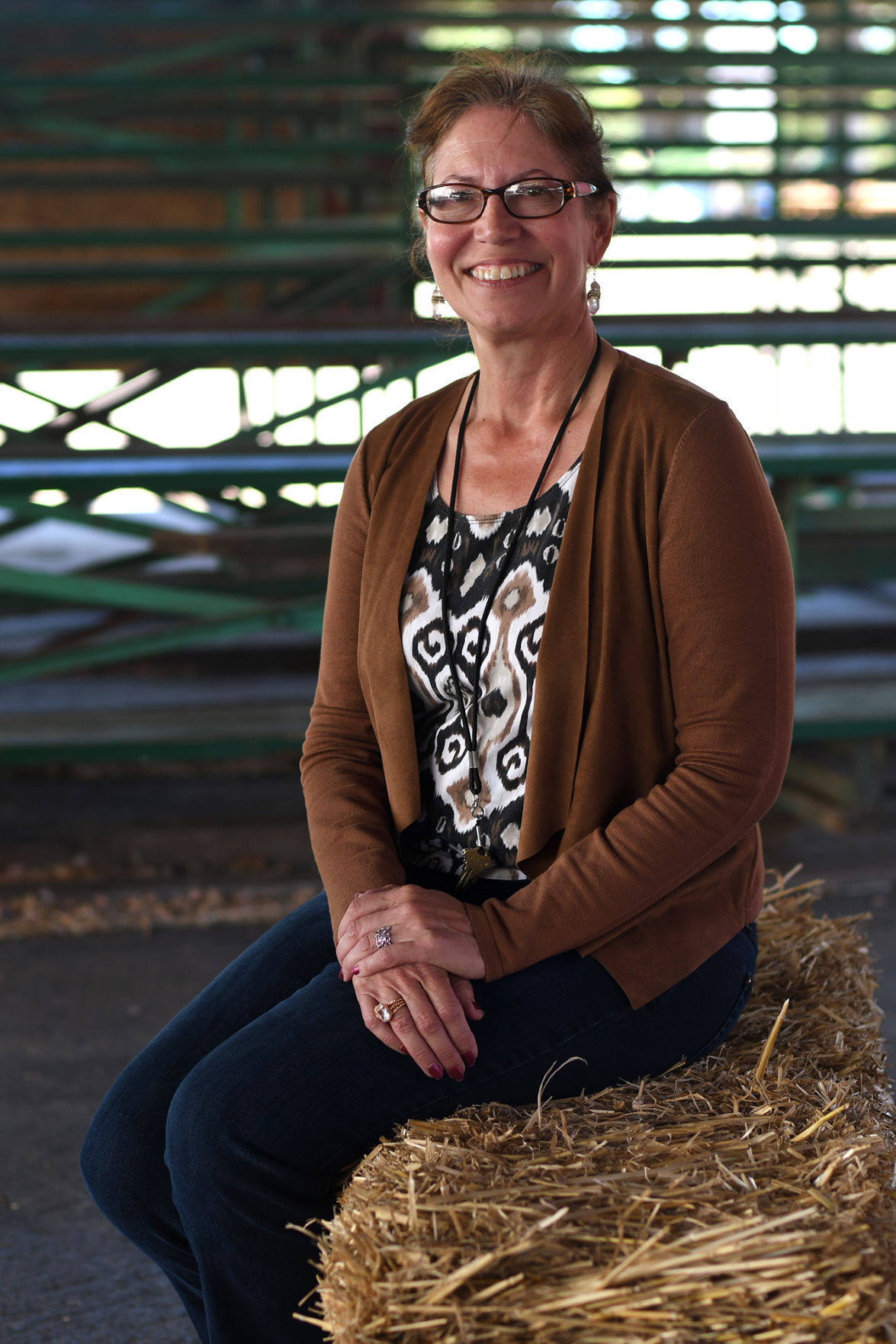 McKee says she hopes to maintain many of the Benton County Fair's traditional elements while finding ways to keep the event relevant and attract new audiences. 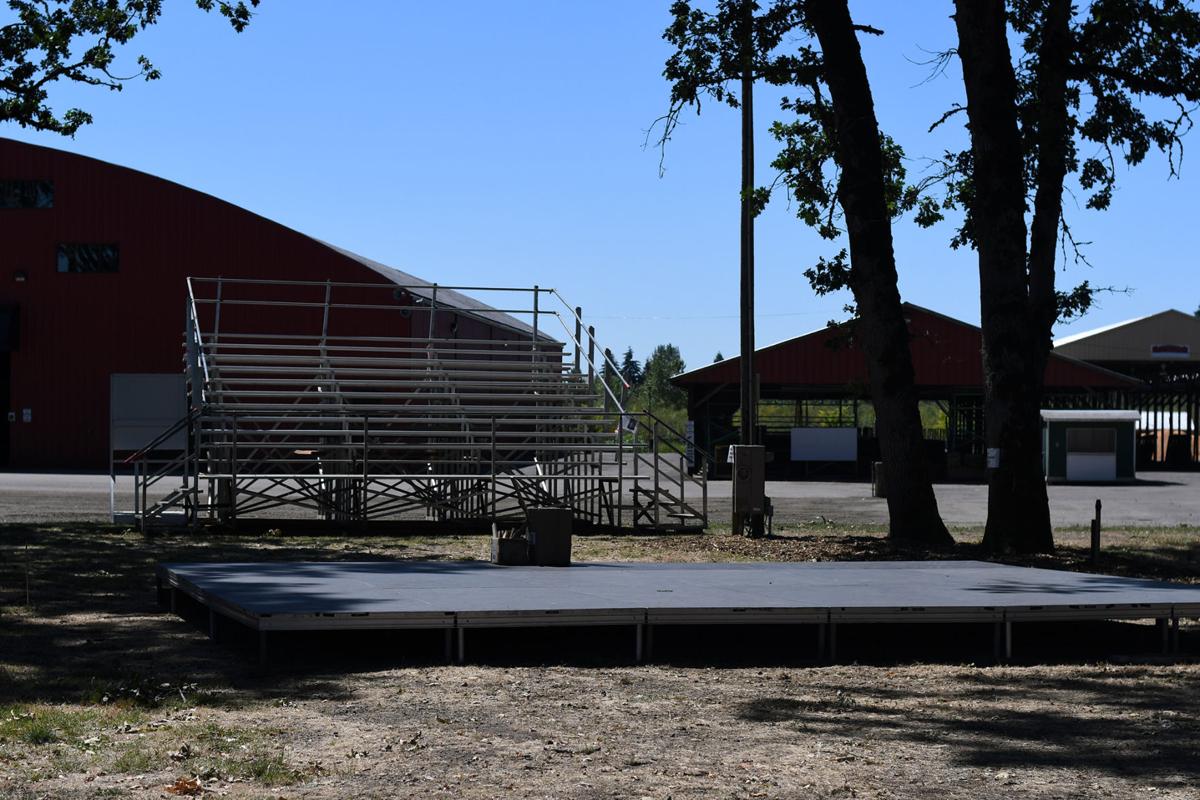 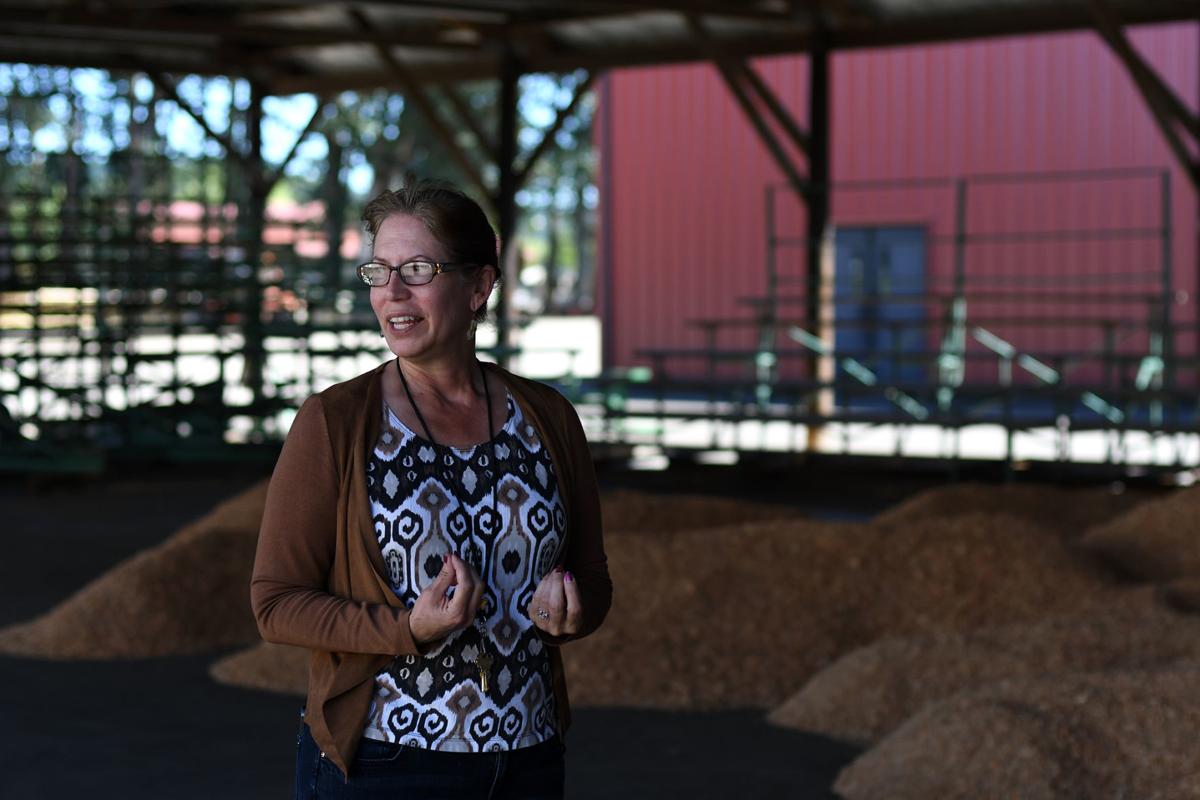 Benton County Fairgrounds Manager Lynne McKee walks past the auction ring on Tuesday during preparations for this year's Benton County Fair & Rodeo. This will be the first fair for McGee, who started her job in May.

With the 2016 Benton County Fair & Rodeo set to kick off on Wednesday, Lynne McKee is getting a baptism by fire.

When she was hired in April to be the new manager of the county fairgrounds after a nationwide search, the head of the Benton County Fair Board praised McKee’s background in museum management and special events production, saying she would bring fresh skills and ideas that could help reverse slumping fair attendance and pump new revenue into a budget that consistently runs in the red.

But before she can do that, she has to get through her first fair.

“It’s not a learning curve,” McKee said last week during a short break from the frantic preparations underway at the Benton County Fairgrounds. “It’s more like a learning cliff, and I’m going straight up.”

Her small staff was busily working the phones, coordinating with performers, vendors and volunteers. McKee had plenty of calls to make herself, but for the most part she was just trying to stay out of the way while the veteran organizers in her office did what they do every year: Handle all the innumerable details that have to be taken care of to make the four-day event come together.

Rather than start changing things right away, McKee said her goal for this year is mainly just to watch and learn.

“This time I’m trying not to do a lot different. There’s an established fair formula that I’m trying not to mess with too much,” she said. “Afterward, I’ll review things with the Fair Board and see what worked and what didn’t.”

County fairs are a summertime tradition across America, but in many places they’re struggling to attract visitors and remain financially solvent in the face of growing competition for consumer entertainment dollars.

Ideally, the Benton County Board of Commissioners wants the fairgrounds to be self-sufficient, but the operation’s $2.1 million budget for 2015-17 includes a $786,000 subsidy.

Previous manager Lonny Wunder made a number of facilities improvements at the 33-acre fairgrounds and came up with some additional revenues, most notably doubling the income from the Benton Oaks RV park, but he was essentially a traditional fair manager. County officials are looking for something different from McKee.

Her background is undeniably a departure.

Prior to taking over as fairgrounds manager for Benton County, McKee spent a year and a half as executive director of the Deepwood Museum and Gardens in Salem, a historic Victorian home in a parklike setting that plays host to everything from historic tours and educational programs to wedding rentals and music festivals.

Her resume also includes eight years as manager of the Hi-Desert Nature Museum in Yucca Valley, California, eight years with the FBI’s art theft program and stints at the Smithsonian Institution and Monticello (“I’ve touched Thomas Jefferson’s underwear,” she confides).

In what may be a sign of things to come, one of McKee’s first acts as fairgrounds manager was to give the facility a tagline: “Connecting our community.”

It’s the kind of slick marketing gimmick you might expect from a big city advertising agency, but McKee hopes it sets a new tone for the Benton County Fairgrounds and its biggest annual event.

“I think that’s what the fairgrounds does,” she said. “That’s really what the fair is all about, bringing people together.”

McKee’s long-range plans for the fairgrounds focus on expanding the number and types of organizations that use the facility.

“I would like to look at how can the Fair Board work with different organizations to bring different audiences to the fairgrounds. Partnering with other organizations, I think, is huge,” she said.

“My main goal is community involvement and what will bring different segments of our population here and how can we best serve our constituents,” she added. “We have a great space here. How can we utilize that?”

As for the fair itself, McKee’s aim is to perform a delicate balancing act: maintain the traditional elements that people say they love while finding ways to reinvigorate the event and attract new audiences.

“There’s so much support in this county for the fair,” she said. “It’s just been wonderful to see.”

So far, she’s made only the most minor of tweaks to the tried-and-true fair formula, booking a variety act called Zuzu Acrobats that made a name for itself on the popular NBC TV show “America’s Got Talent.”

“They were traveling through the Northwest, and we were able to get them here,” McKee said.

But she’s already thinking about what she can do next year to appeal to young people, from staging a “Pokemon Go” tournament to setting up a large video monitor where fairgoers can share their tweets, Facebook posts and Instagram photos live at the event.

“A lot of our model is a hundred years old,” she pointed out. “How do we keep that county fair feel people like but also keep it relevant for new generations?”

In the end, McKee said, putting on a county fair isn’t really that much different from putting on any other sort of big event: It’s all about enhancing the visitor experience.

“It’s always an interesting challenge, but a fun challenge,” she said.

“I love to be able to do special events,” she added. “I love, after all the hard work, to just walk through and watch people enjoy it — because this is why we do it.”

The 2016 Benton County Fair & Rodeo runs from Wednesday through Saturday at the county fairgrounds, 110 S.W. 53rd St. The fair opens at 11 a.m. each day and goes until 11 p.m. Wednesday and Thursday and midnight on Friday and Saturday.

This year’s musical lineup will feature Carrie Cunningham & the Six Shooters, Olivia Wichman and Kurt Van Meter on Wednesday, the Olson Brothers Band, Amos True & the Easy Targets and Confederate Railroad on Thursday, the Randy Linder Band and Stone in Love on Friday and Home Free and Jackson Michelson on Saturday.

The NPRA-sanctioned rodeo begins at 7 p.m. Thursday and Friday.

Advance ticket prices are $6 general admission, $4 for seniors and $2 for youths ages 6-16. Four-day passes are also available, and a one-day carnival ride bracelet costs $25. There’s free admission until 5 p.m. for kids on Wednesday, for seniors on Thursday and all day for veterans, military personnel, first responders, police and firefighters on Friday.

The Corvallis Transit System’s CTS Trolley will offer a free shuttle service to and from the fair, with stops at the downtown transit center and free park-and-ride lot at Zion Lutheran Church, 2800 N.W. Tyler Ave., and Oregon State University’s Merritt Truax Indoor Center, Southwest 30th Street at Washington Way. The shuttle will run from 3:30 to 11:30 p.m. Wednesday and Thursday and 4:30 p.m. to 12:30 a.m. Friday and Saturday.

To order tickets online or see a complete schedule, go to http://www.bentoncountyfair.net/events.

McKee says she hopes to maintain many of the Benton County Fair's traditional elements while finding ways to keep the event relevant and attract new audiences.

Benton County Fairgrounds Manager Lynne McKee walks past the auction ring on Tuesday during preparations for this year's Benton County Fair & Rodeo. This will be the first fair for McGee, who started her job in May. 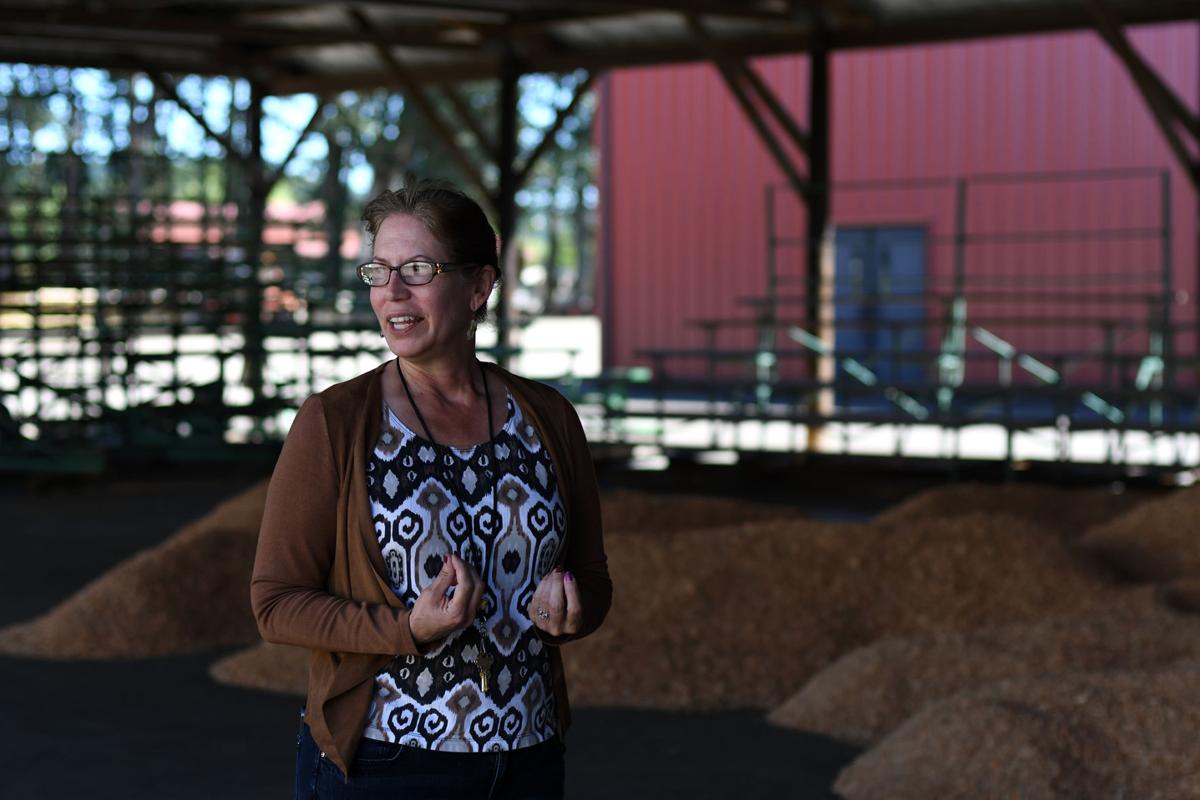